CALBAYOG CITY – The city’s local government unit achieved an acceptable or passing rate of 79.77 in the 2016 Anti-Red Tape Act (ARTA) Report Card Survey (RCS) of the Civil Service Commission (CSC) for the rating period covering March to December 2016. This report is based in the recently released 2016 ARTA Report Card of the Civil Service Commission.

Being the lead agency in the implementation of Republic Act 9485 or the Anti-Red Tape Act of 2007, the CSC conducted RCS to check on the manner that the different government agencies are implementing the ARTA which is intended to reduce, if not totally eradicate, corruption and the “red tape practices” or the complicated and lengthy processes that entail the delivery of services to the public. Posting of the Citizen’s Charter, Anti-Fixer Initiatives; Wearing of ID’s and/or nameplates by the service providers; attending the Public Assistance and Complaints Desk; and Imposition of the No-Noon-Break Policy are among the criteria evaluated under the RCS.(https://www.scribd.com/document/337896713/2016-Anti-Red-Tape-Act-Report-Card-Survey-Result

Basing its selection on high-density transactions, volume of complaints and feedbacks from clients served and the social services provided by the LGUs, Local Water Districts (LWDs) and State Colleges and Universities (SUCs), the survey was conducted to 1,109 government agencies.

LGU Calbayog garnered a rating of ACCEPTABLE while Northwest Samar State University (NwSSU) was rated GOOD with a score of 82.48%. On the other hand, Calbayog City Water District earned a failing mark at 78.79%.”

According to CSC and based on LGUs, LWDs and SUCs included in the survey in Region 8, LGUs that earned failing marks are Isabel, Palompon, Carigara, Alang-Alang, Abuyog, Baybay City and Sogod in Leyte and Southern Leyte; Naval in Biliran; the city of Borongan, municipalities of Guiuan and Llorente in Eastern Samar; and municipalities of Catubig and Las Navas in Northern Samar. 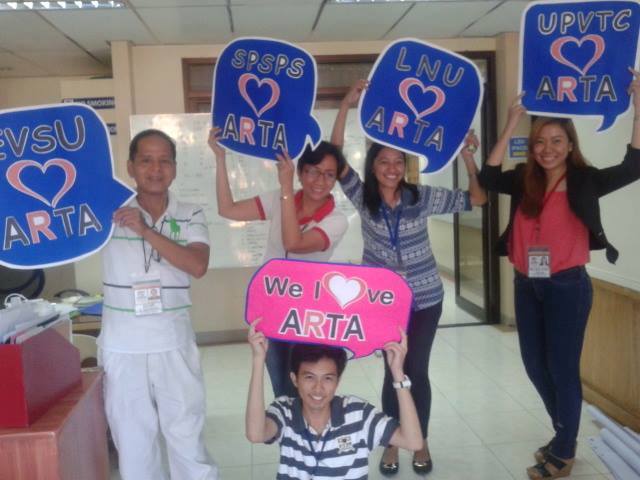 Visayas State University (VSU), among the SUCs was also rated GOOD along with Calbayog’s NwSSU. (CJ/with newsstory from ELEEN LIM)