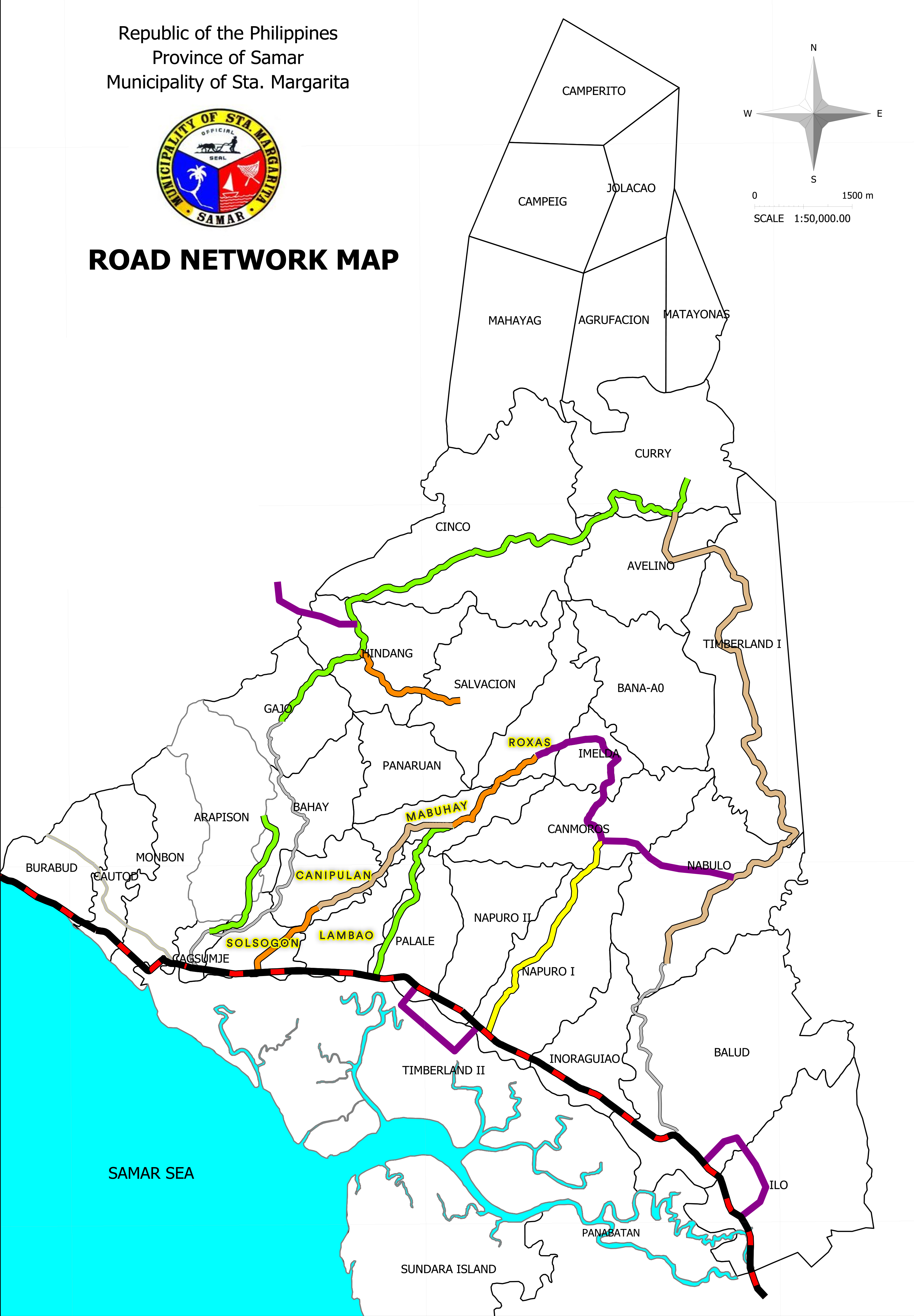 STA. MARGARITA, SAMAR – The construction of farm-to-market roads (FMRs) with an aggregate length of 8.5 kilometer that will connect the municipality’s villages to the national highway is targeted for completion before the end of the year 2017.

Seen not only to improve the lives of the residents of three villages located north off the Maharlika National Highway, opening of these roads will also help alleviate congestion of the built-up areas along the main thoroughfare when settlers will be encouraged to situate their homes in these rural areas already being made accessible with concrete roads.

The 8.5-kilometer project that includes opening and concreting of the roads is divided into four (4) phases: (1) Solsogon to Can-ipulan, 1.5 kms; (2) Lambao to Mabuhay, 2.4 kms; (3) Mabuhay to Roxas, 2.2 kms; and (4) Mabuhay to Can-ipulan, 2.4 kms. Completion of these roads construction will also give rise to the communities' economy as increased farm production in the area is seen to be inspired by accessibility to the market. 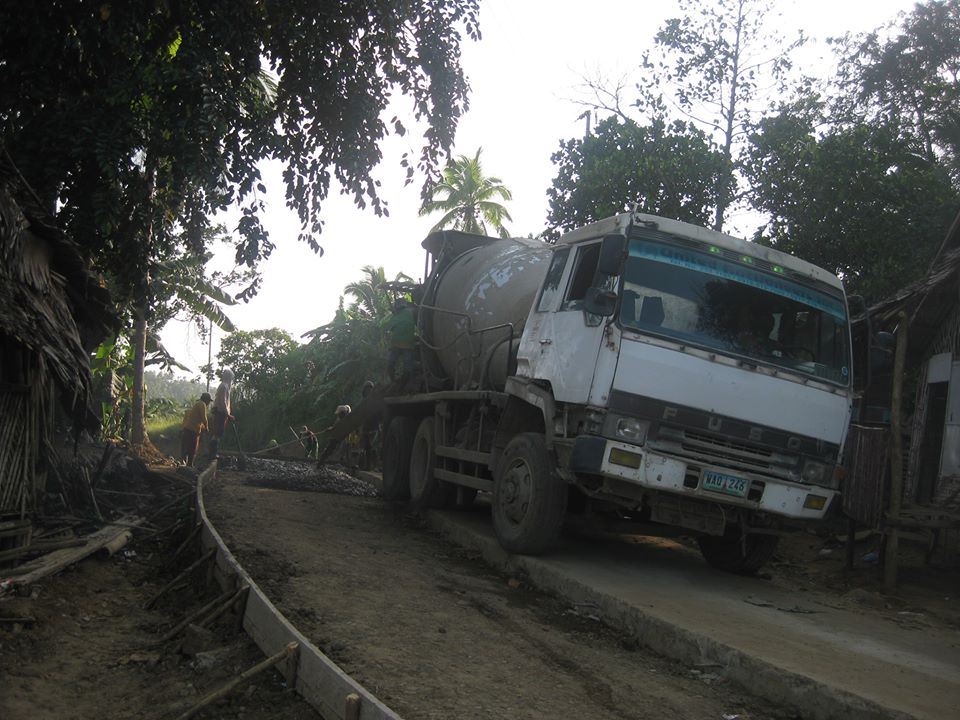 Having been the first to be implemented as early as the 3rd quarter of 2016, Lambao-to-Mabuhay FMR is already a completed project since the third week March 2017. “Works on the project consisted of road opening and concreting the 2.4 km length of road at a specification of five meters wide and 9 inches thick of concrete,” the Contrator’s Site Engineer Regis S. Jabelo informed.

The Site Engineer added that “Apart from the rainy weather conditions that adversely affected the flow of work, slight changes in the specifications of the project needed a few number of days in addition to the original contract time but we have already completed the works and we are just awaiting final inspection and acceptance of the project by the government.”

On the other hand, Lito Casaljay, 19-year-old resident of Barangay Mabuhay, expressed excitement over the road construction project: “I will be able to continue my studies without so much financial difficulty already because we can just walk thru the concrete roads in reaching the national highway to minimize expenses for tricycle fare. My farmer parents can also easily bring to sell our products in the poblacion.” 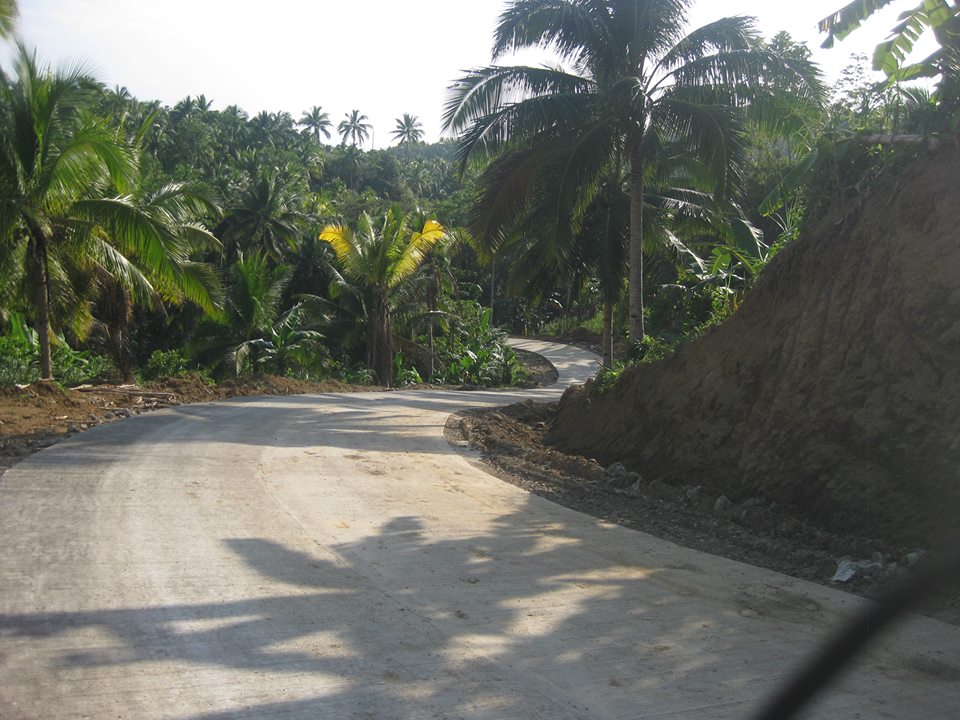 Even if farming is the major source of livelihood of the families in Mabuhay, Roxas and Can-ipulan, a vast area of land in between these villages is obviously still uncultivated.

During the site visit, Mano Tino, a senior villager told Calbayog Journal that farmers in the area are hesitant to plant crops because of the problem in selling the produce that leaves most of the land fallow.

"Our place is hardly accessible by vehicles. If we walk thru the dirt road, we will reach the market place with the products we hand-carried no longer fresh. Neither can buyers or middlemen come to our place to buy our products because there was no road. So, our efforts and little investments will be wasted," Mano Tino said. 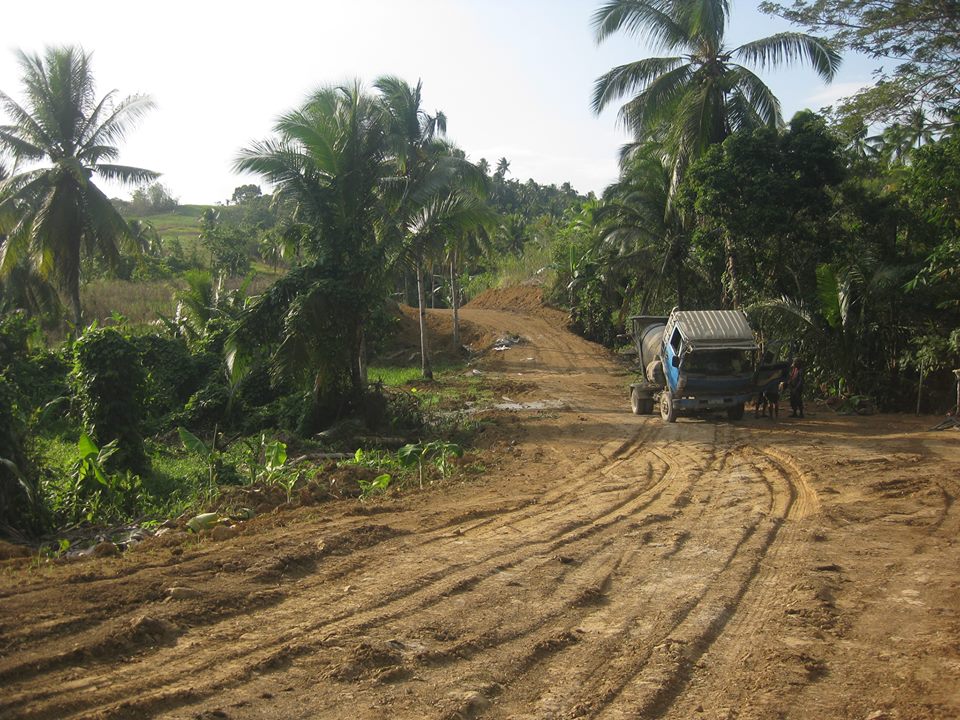 Nida Capistrano who is a 'dicer' (popular term for a middleman or a person who engages in buy-and-sell of products), said that "with the opening of concrete roads, we can now go to these villages to buy their produce in bulk so that the roads can also be an avenue for the farmers to be able to sell their products even if they don't have to go to the market.

Meanwhile, works on the three other project phases, namely, Mabuhay-to-Roxas, Mabuhay-to-Can-ipulan; and Solsogon-to-Can-ipulan roads are already on-going at its road-opening-stage having been implemented only in the early part of 2017.

All of these three FMRs, totaling a length of slightly over six kilometers, are targeted to be completed within the year 2017 with funds also authorized under the country’s General Appropriations Act of 2016. 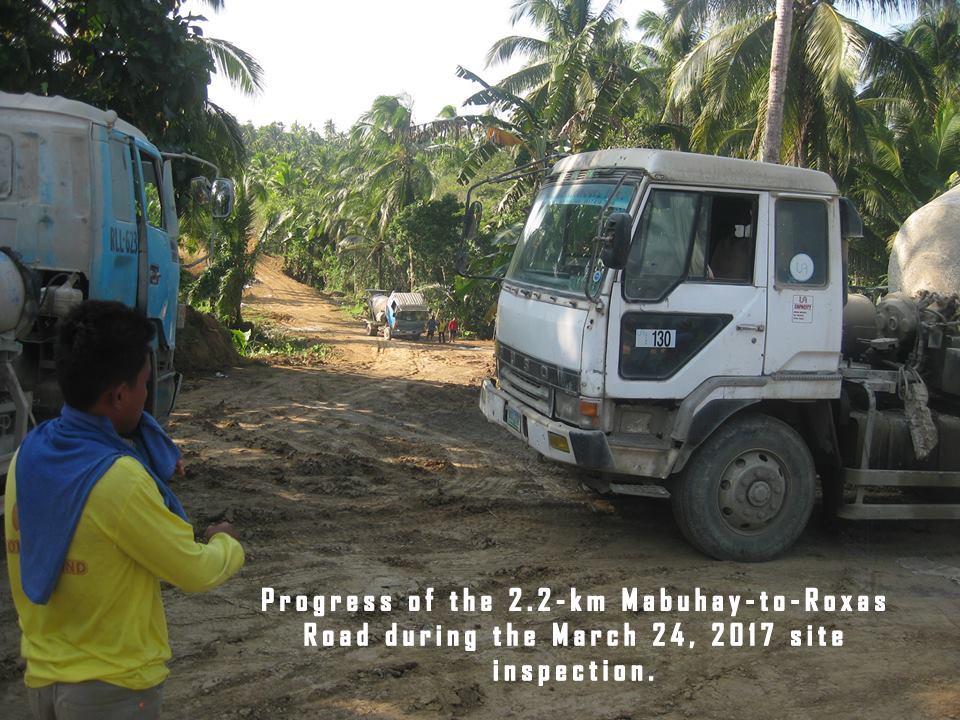 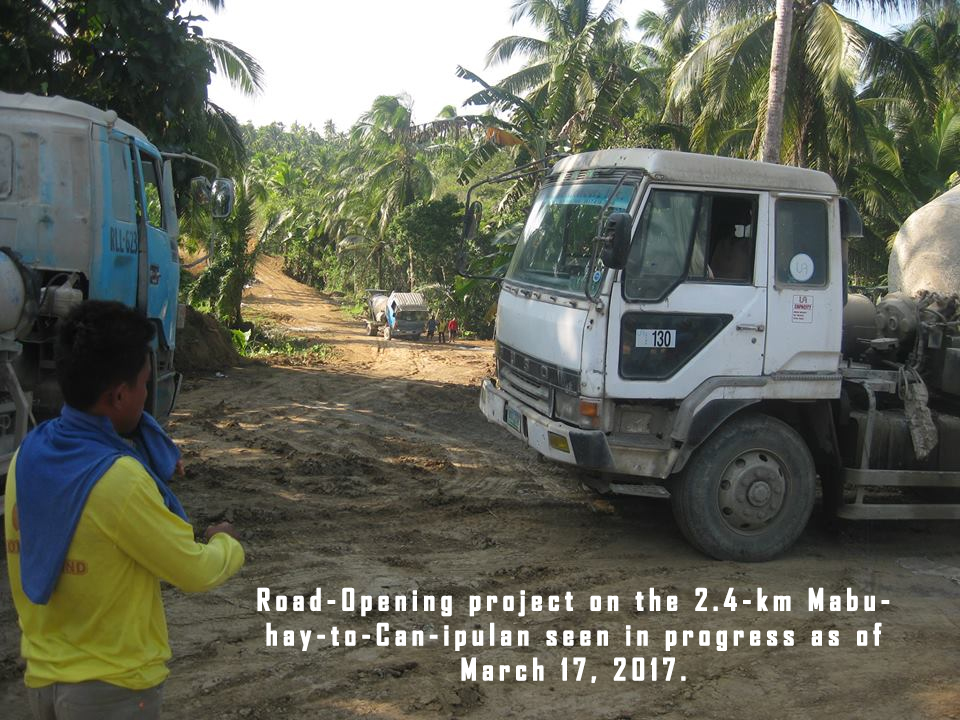 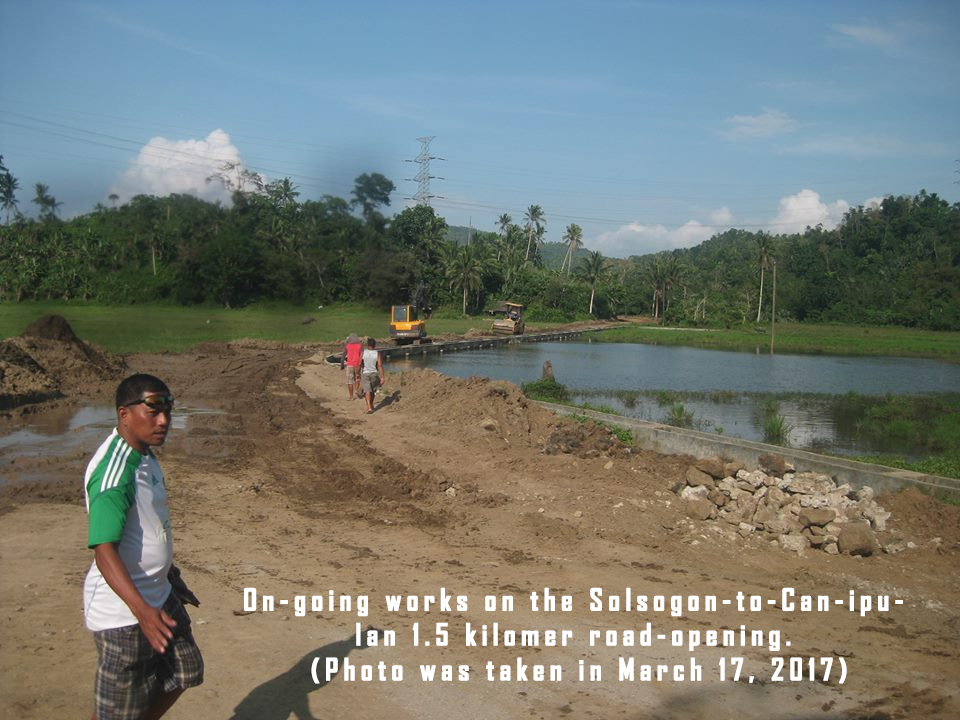