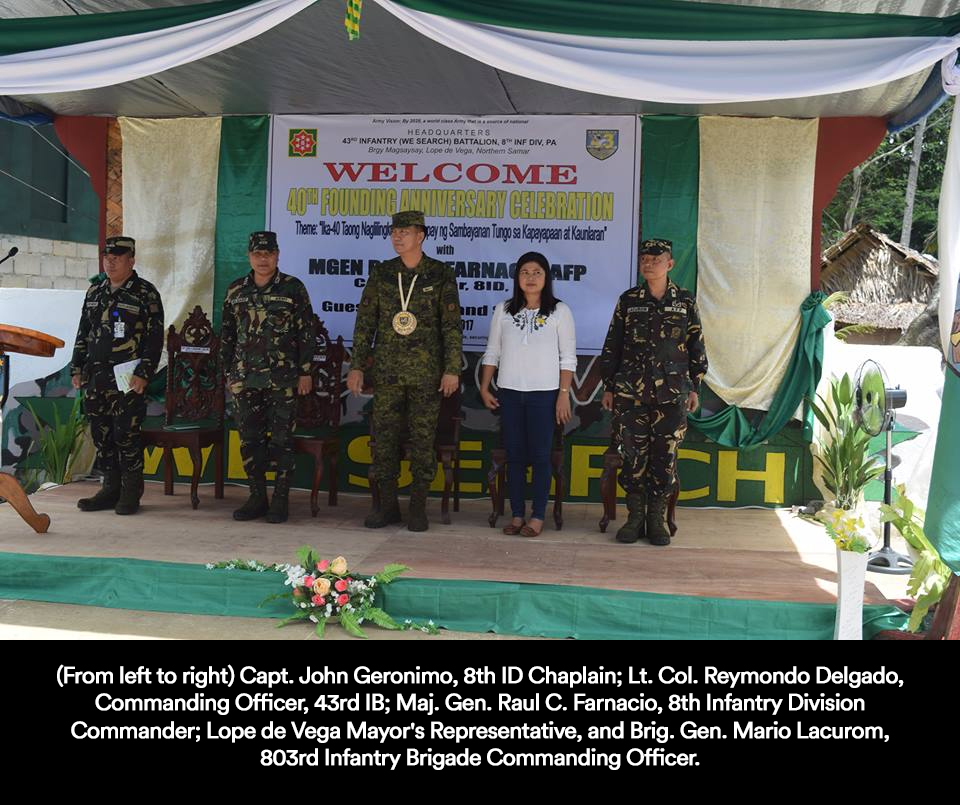 LOPE DE VEGA, SAMAR – The 43rd Infantry Battalion (43rd IB), also called "We Search Battalion" of the Philippine army based in Barangay Magsaysay celebrated its 40th anniversary on March 24, 2017. Currently under the leadership of Lt. Col. Reymondo Delgado since September 2016, the celebrations was graced by two of the battalion’s former commanders.

Guest of Honor and Speaker of the occasion, Major General Raul Farnacio, now Commander of the 8th Infantry Division based in Camp Lukban, Catbalogan City, served as Battalion Commander of the 43rd IB for the period covering December 2004 to March 2006. During which stint, the battalion made a name for the division and the entire army for collaborative efforts to the response operations in the aftermath of the February 2006 Guinsaugon, St. Bernard mudslide where over a thousand people perished.

Presently in command of the 803rd Brigade stationed in Catarman, Northern Samar, Major General Mario Lacurom, who led the battalion in March 2006 to June 2008, was also present during the celebration. Following the quest for peace, M/Gen. Lacurom kept a significant mark in clearing Southern Leyte from NPA affectations and influence.

Part of the celebration was the pinning of medals in merit to the performance of the troopers as well as presentation of awards in appreciation to the support of the civilian community to the programs of the battalion. Maj/|Gen. Farnacio was assisted by the 43rd WeSearch Battalion Commander, Lt. Col. Delgado. 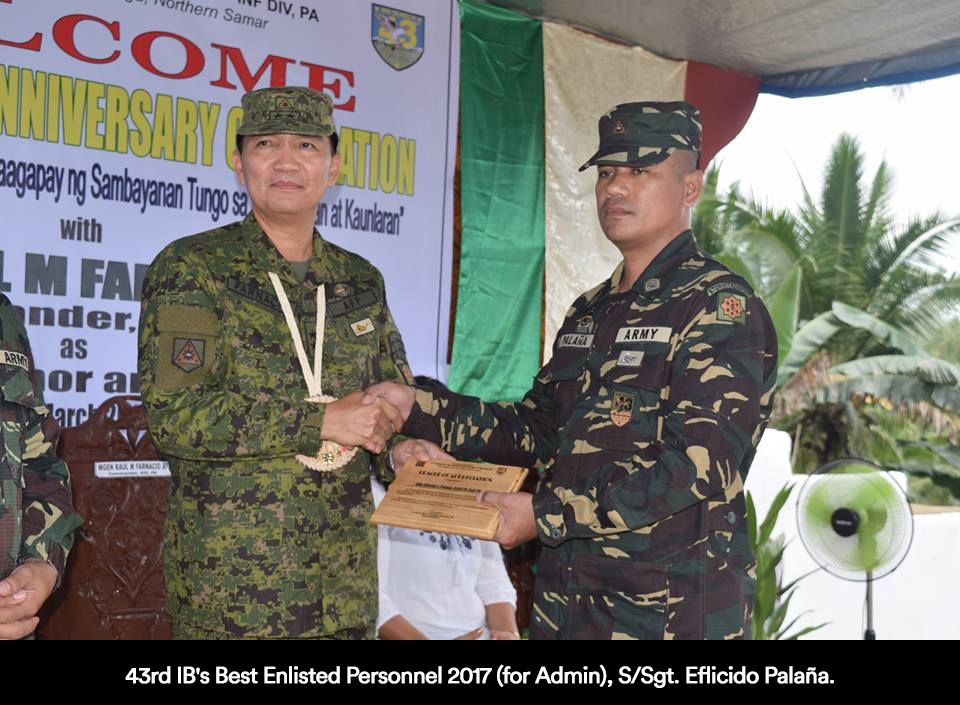 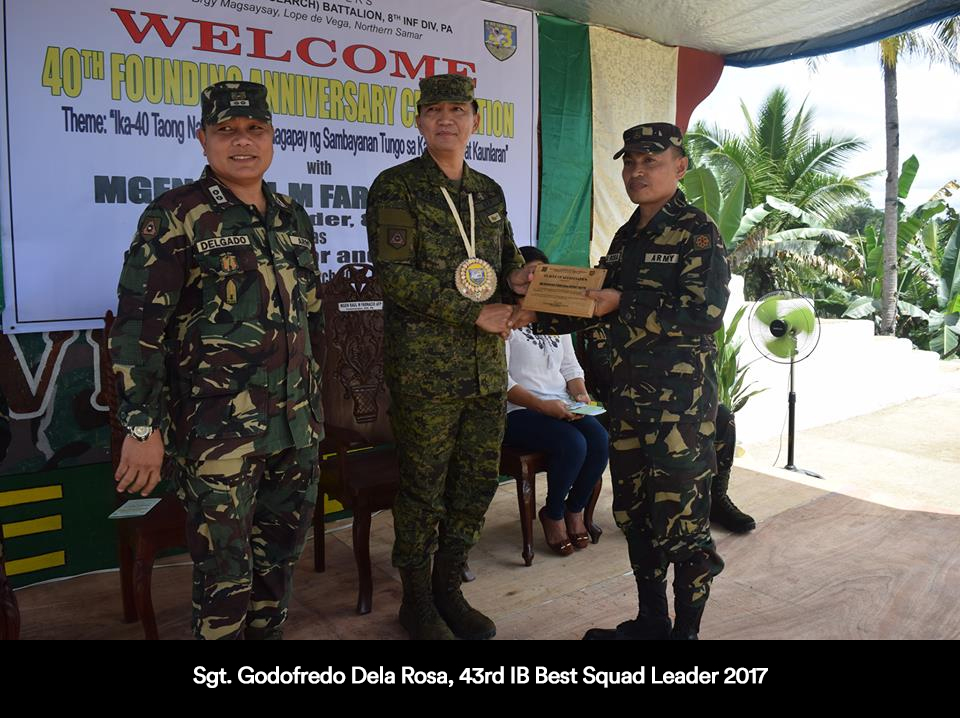 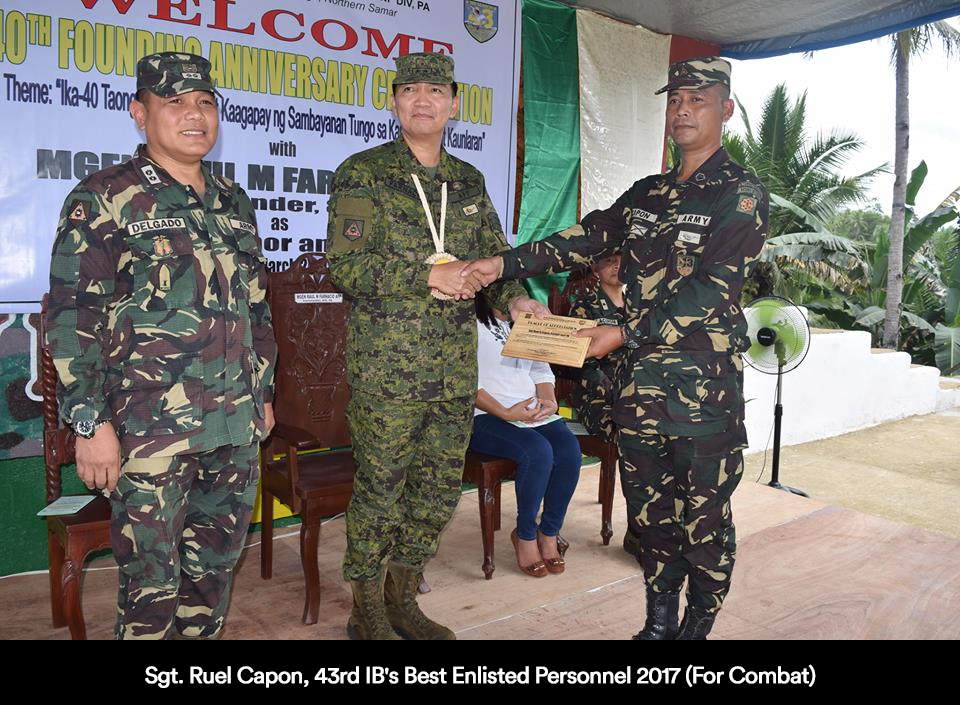 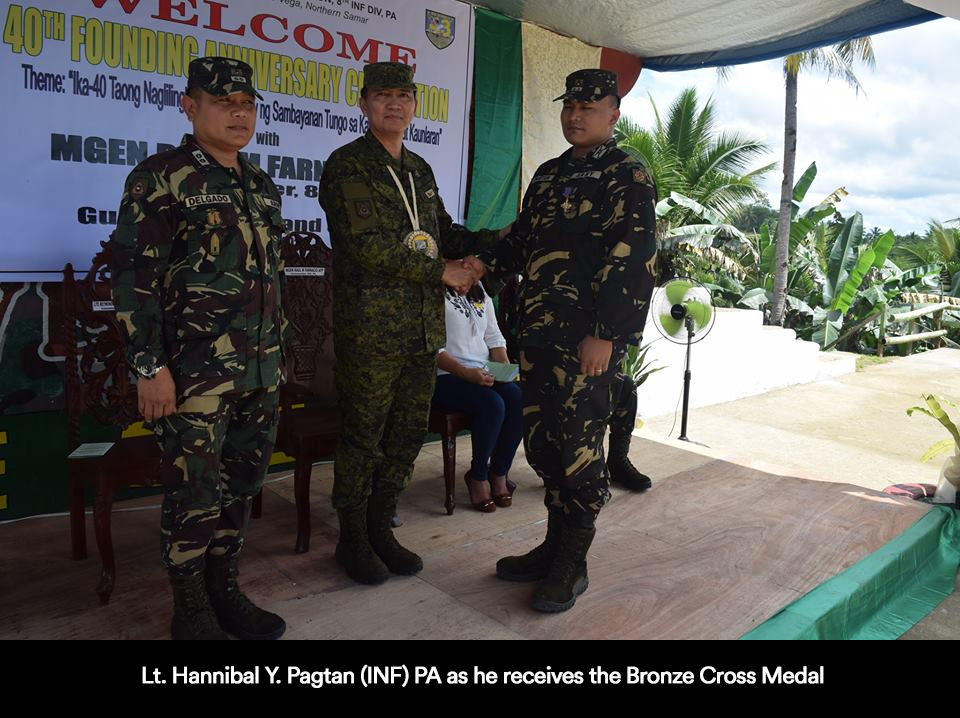 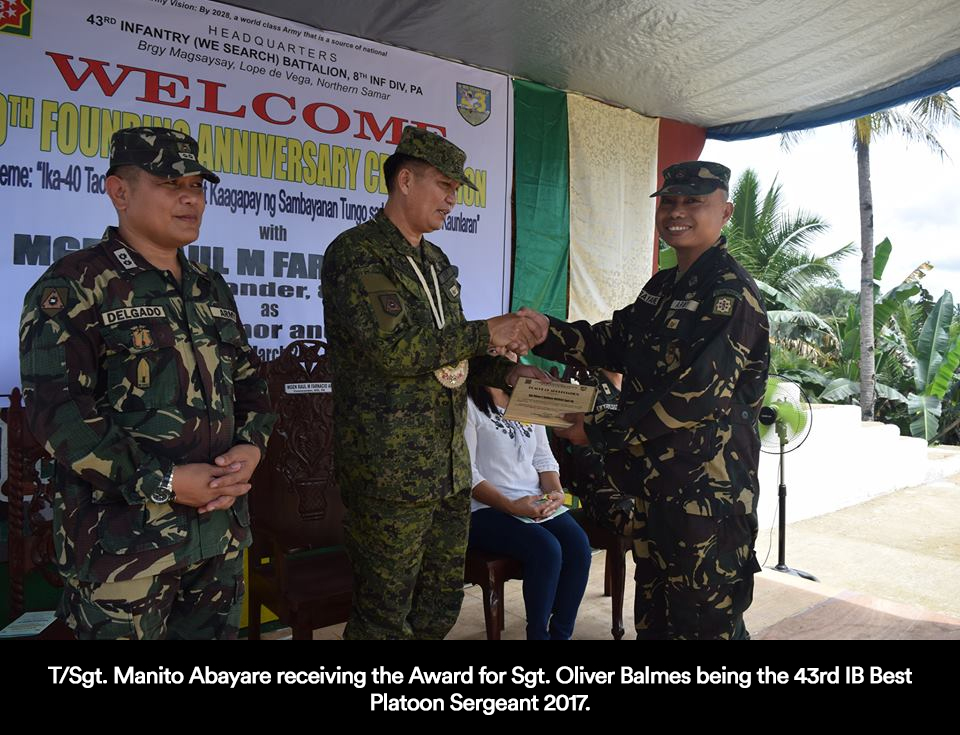 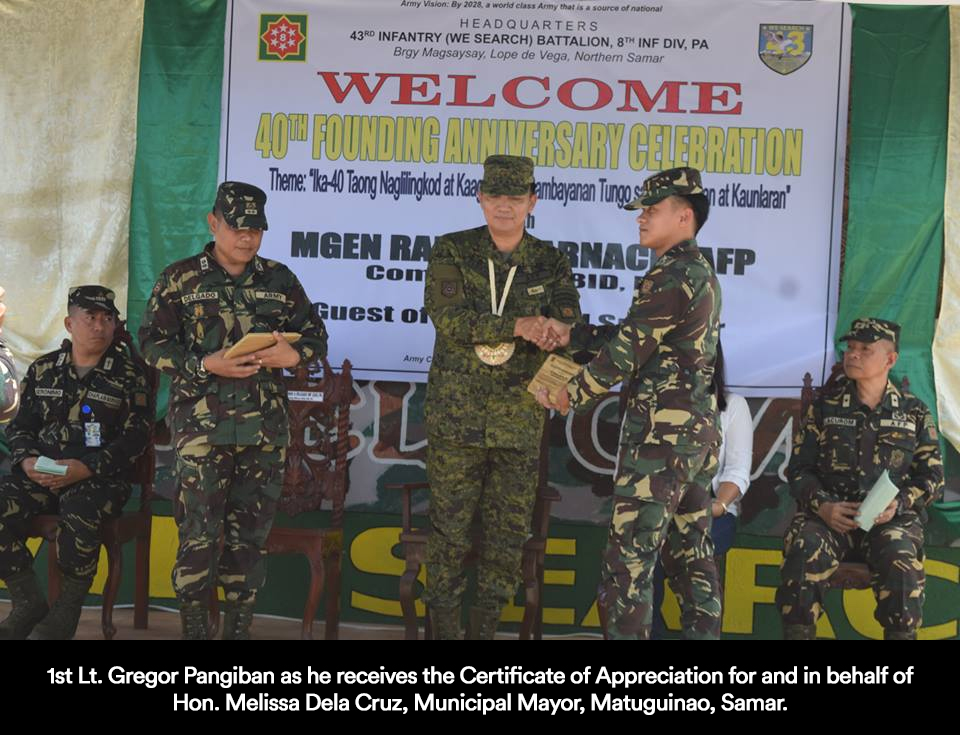 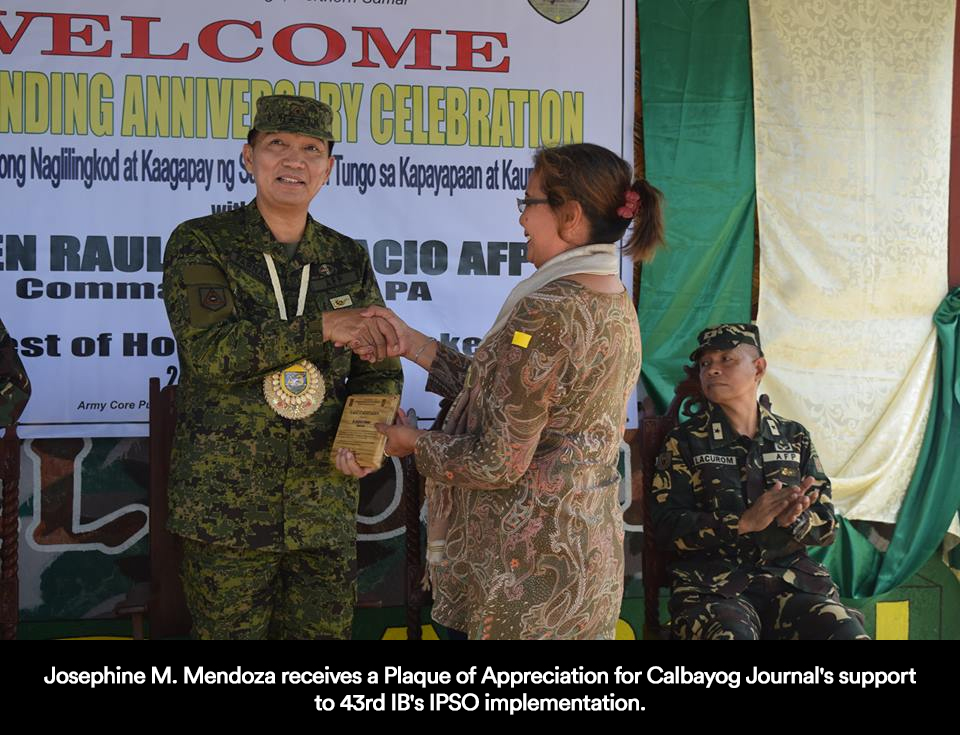 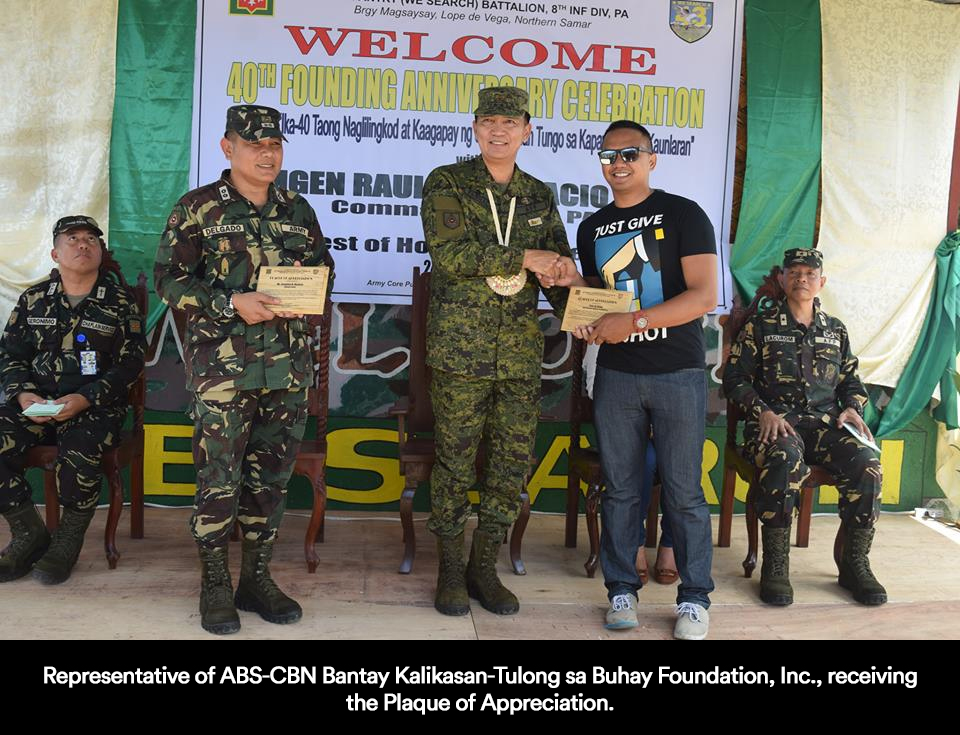 Beleiving that practice makes perfect and in fact the kind of attribute that molded the battalion into its present stature, M/Gen. Farnacio, in his speech, stated that “forty years of witnessing and active involvement in many events, 43rd IB helped shape the current situation that Region 8 is now experiencing. After all the enduring trials, over four decades, 43rd IB has stood far in its professionalism, sense of duties and responsibilities for the greater good.”

Meanwhile, with the recent status of the peace talks initiated by the government and the situation being volatile, the 8th ID Commander calls for vigilance of the troopers saying that “with the future at hand, we must all together strive to honestly realize our standards as the premier unit in the army.” 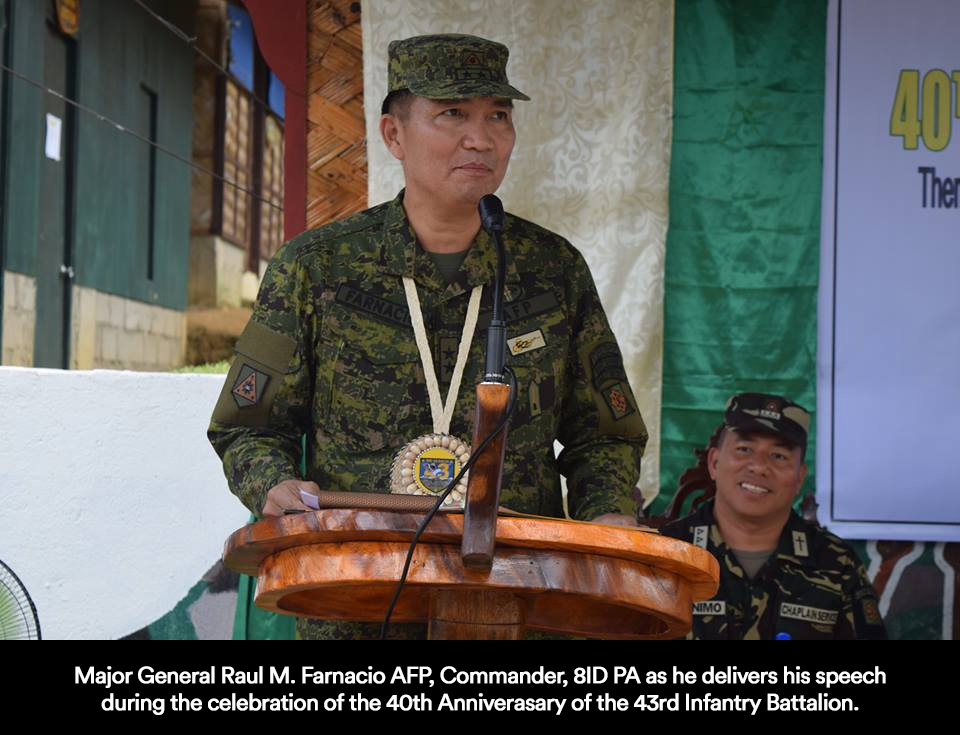 Farnacio also reminded the troopers about the army’s job to remain in the best to the service in making the unit reach its mission thru whatever the changes in the security landscape may be faced in the future.

In conclusion, the Major General stated that “the 43rd IB started and has been a dependable partner of peace and progress in this part of Samar Island.” The troopers were further challenged to set goals higher in the mandate of securing the people and joining the constituents in creating a just and lasting peace in Eastern Visayas. 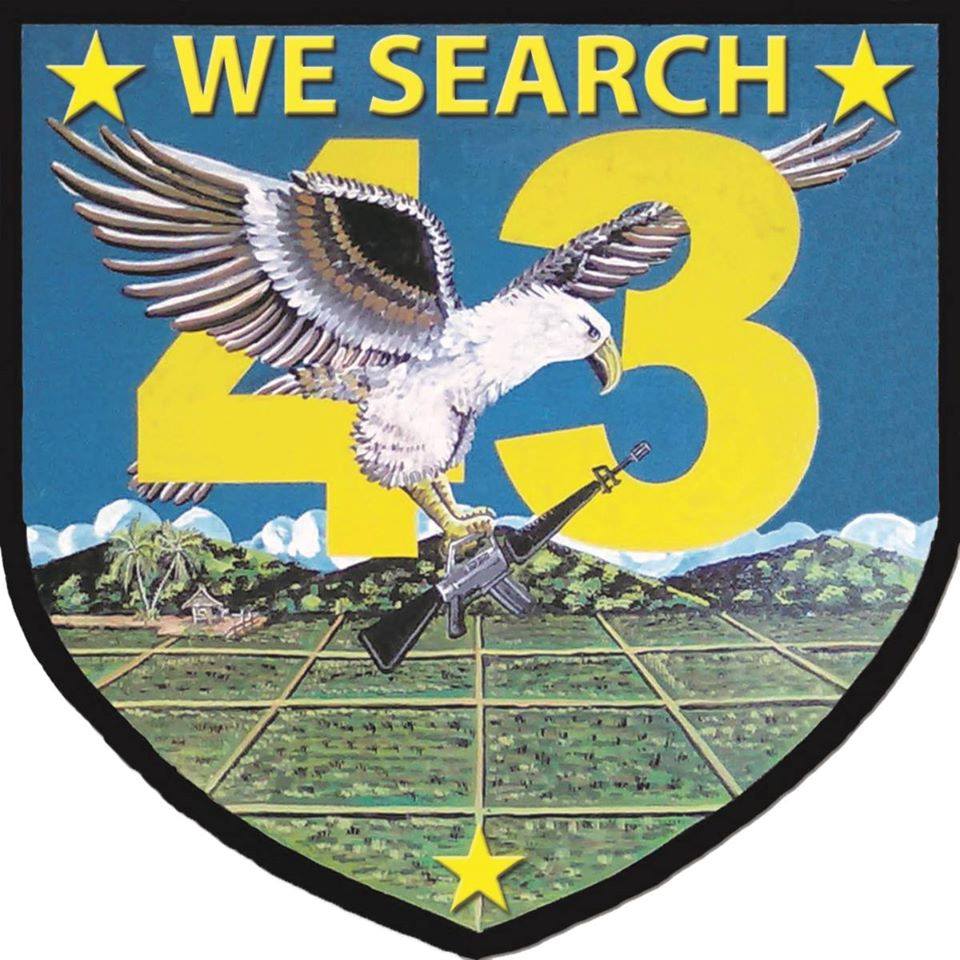 The unit was activated into an Infantry Battalion, on 02 March 1977 pursuant to General Order Number 77, Headquarters Philippine Army dated 19 March 1977, a time when peace and order situation in Mindanao on 21 September 1977 to test its fighting capability against enemies of the state. It carried the motto “WE SEARCH” purposely to track down and destroy lawless elements creating violence in that part of the country and later on to other areas where the motto of the unit is best applicable. 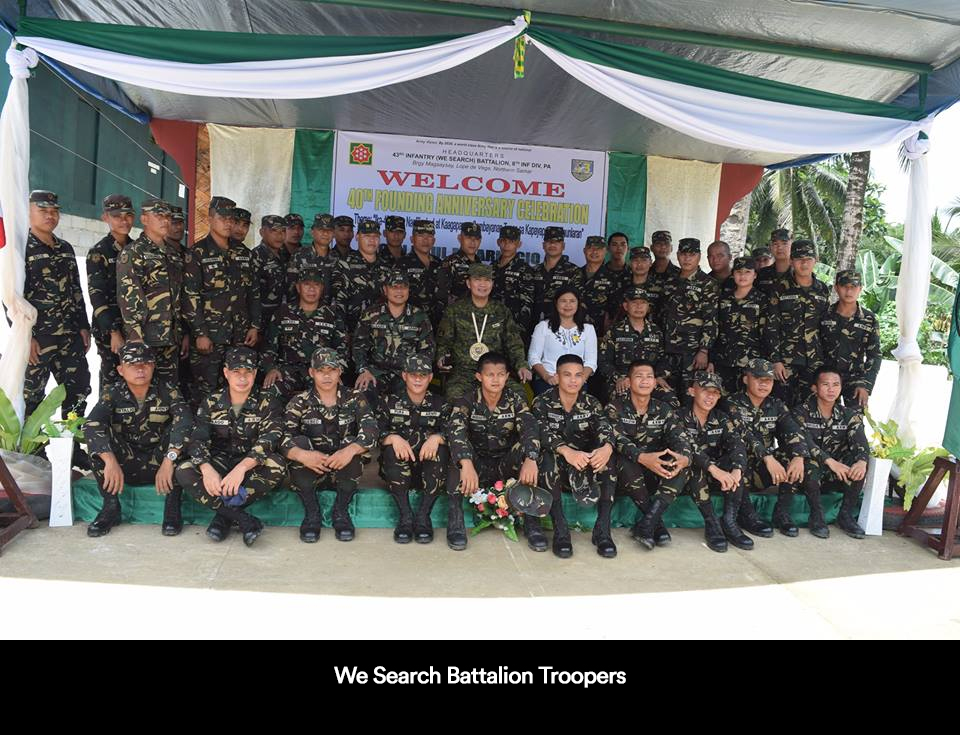 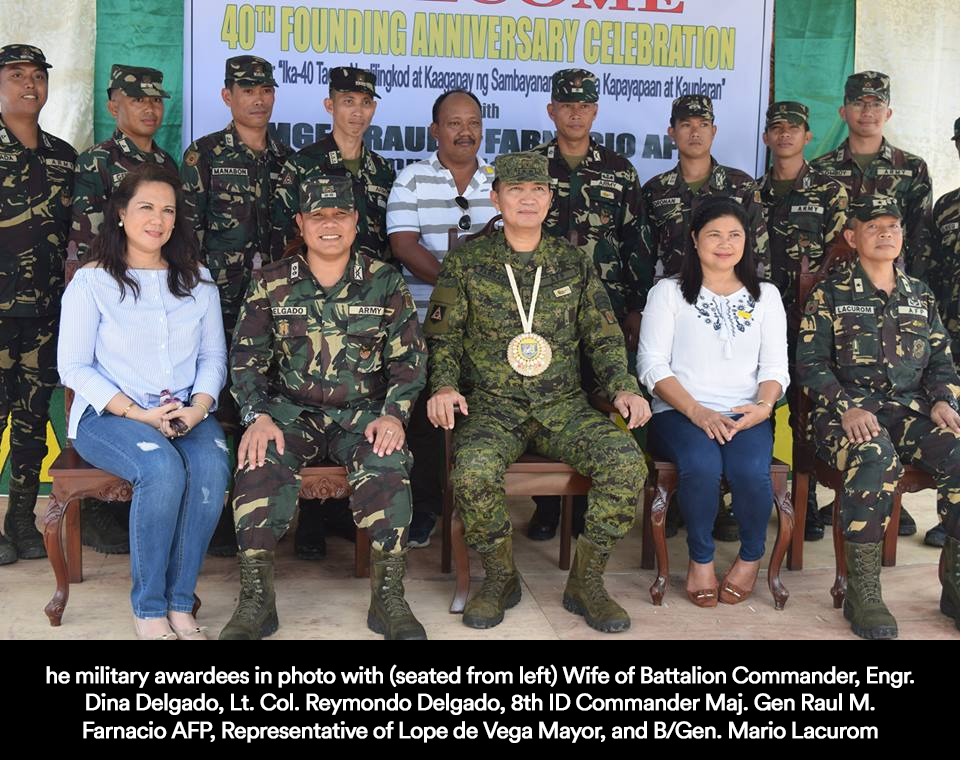