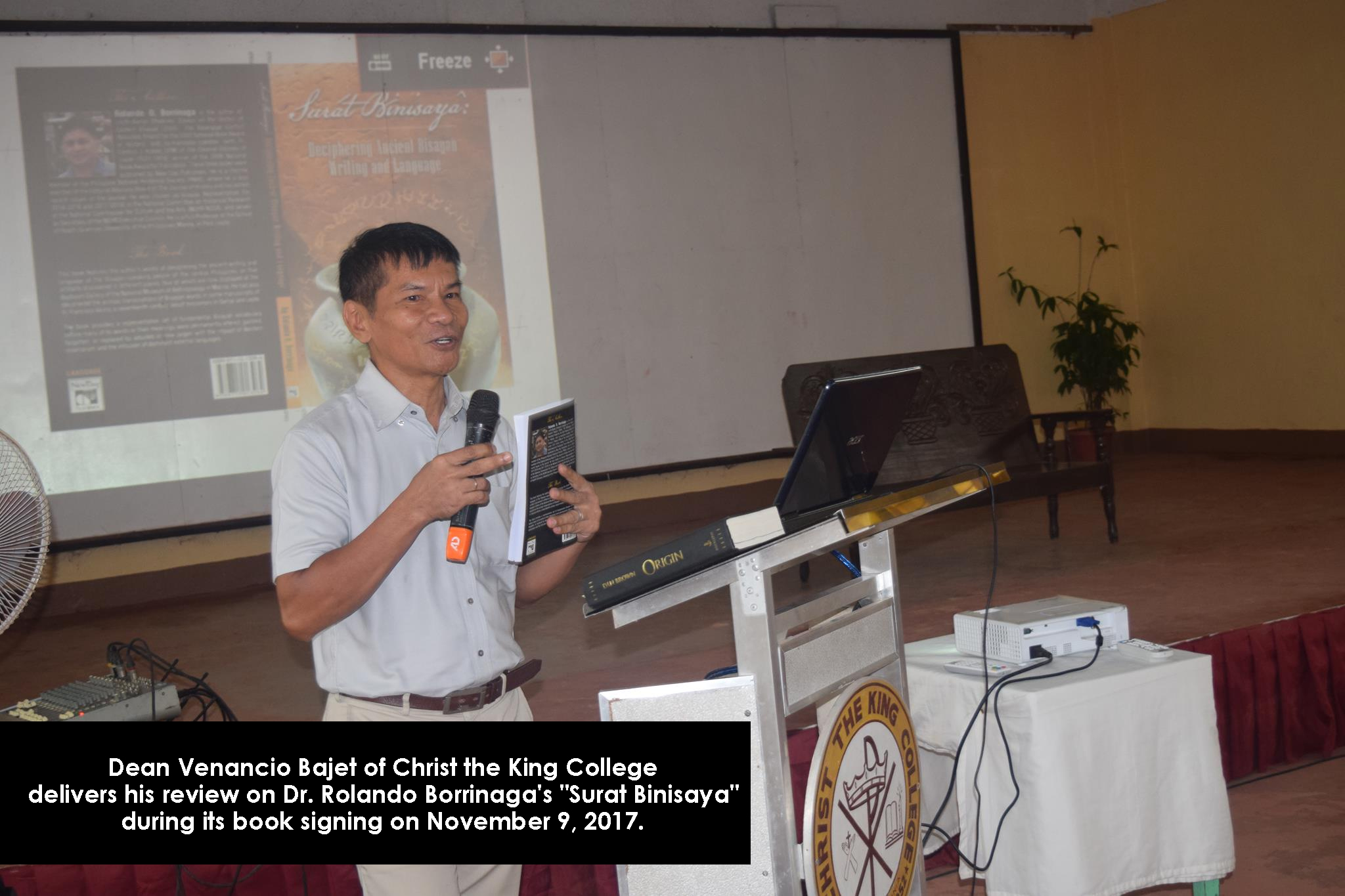 I was presented and requested to make a review on the book of Prof. Rolando Borrinaga at the time I received copy of the latest sequel of one of the world’s controversial novelist, Dan Brown, entitled “Origin” sent to me as a birthday gift from my eldest son. Up to this time that I am making this review, I have not yet reached the end of Brown’s over-400-pages novel which would reveal the new findings on the origin of humankind from a computer geek who was killed on the night for which he would reveal his controversial idea to the whole world. This, accordingly, will create a worldwide stir especially on what religion has to say about man’s origins. Only a few people - Langdon, the fiancée of the Spanish successor to the throne and three other people (one of them already dead) – to whom the computer geek conferred with before his would-be announcement, knew about his secret and they were running against time, against a secret enemy.

Borrinaga’s “Surat Binisaya” is only half as thick as Brown’s “Origin.” I already finished reading the former even before I started with the latter. I mentioned Brown in my review since most of his works especially about his world renowned character - Robert Langdon, the famous encryptologist - solved the secrets of the last supper in his equally famous book, Da Vinci Code. Borrinaga’s work is similar to Robert Langdon’s in the sense that “Surat Binisaya” presented transcriptions of the ancient writings of early Filipinos. These books, however, are entirely different in the sense that “Origin” is fictionalized while Borrinaga’s is a non-fiction historical book. 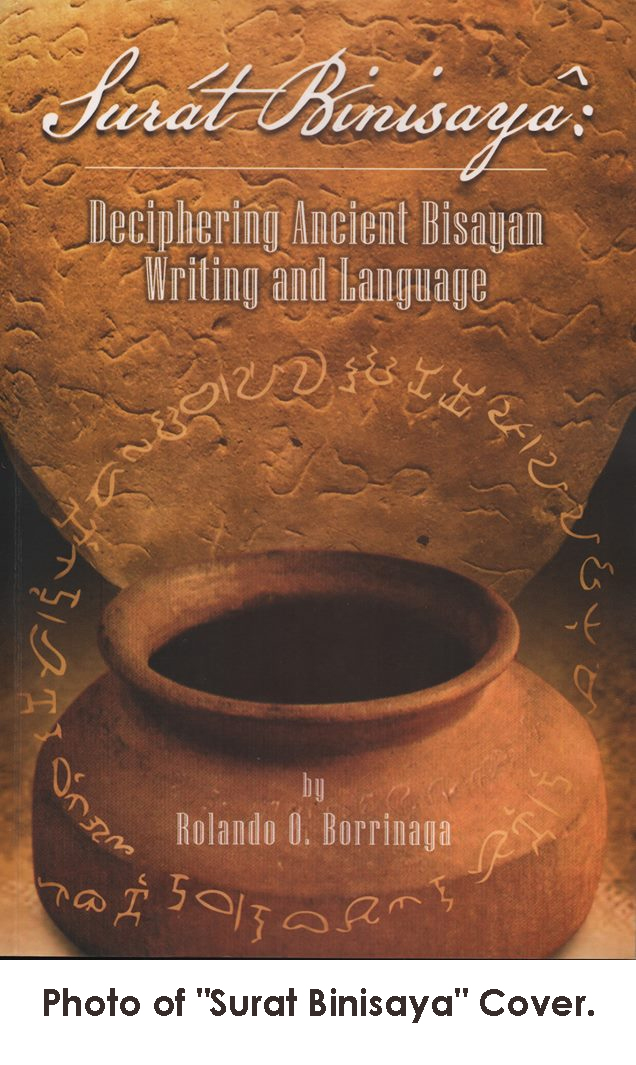 The task of reviewing a work of a well-known historian on a subject needing thorough knowledge in history, anthropology, linguistics, etc. is indeed appalling on my part. I must admit that I do not have the expertise on a topic which could only be discussed by men like Prof. Rolando O. Borrinaga.

As I would highly recommend reading the non-fiction book, Surat Binisaya, I will also share a layman’s point of view about it.

My knowledge of ancient Filipino writings particularly the “Baybayin,” dates back to my college days when our history teacher discussed in passing the topic on ancient syllabaries which which is just a part of a chapter on Pre-Colonial Culture. A one-page presentation in Agoncillo’s textbook, “History of the Filipino People” tells us about our ancient syllabaries, and I quote:

“The Filipinos before the arrival of the Spaniards had a syllabary which was
probably of Sanskrit or Arabic provenance. The syllabary consisted of seventeen
symbols, or which three were vowels (a, e or i, o or u) standing for the present five vowels, and fourteen consonants (b, k, d, g, h, l, m, n, ng, p, s, t, w, y).”

He continues by saying,

“The direction of writing is still a problem, for no scholar could present
incontrovertible proofs and strong reasons to support his theory. It is
more probable, however, that Father Pedro Chirino was correct in his
theory that the early Filipinos wrote vertically from top to bottom and
from left to right.”

After the introduction to the “Baybayin” characters, we began writing our own names in ancient transcripts. The experience is something new and somehow very exhilarating thinking that we become unreadable to those who are not oriented to this old way of writing. 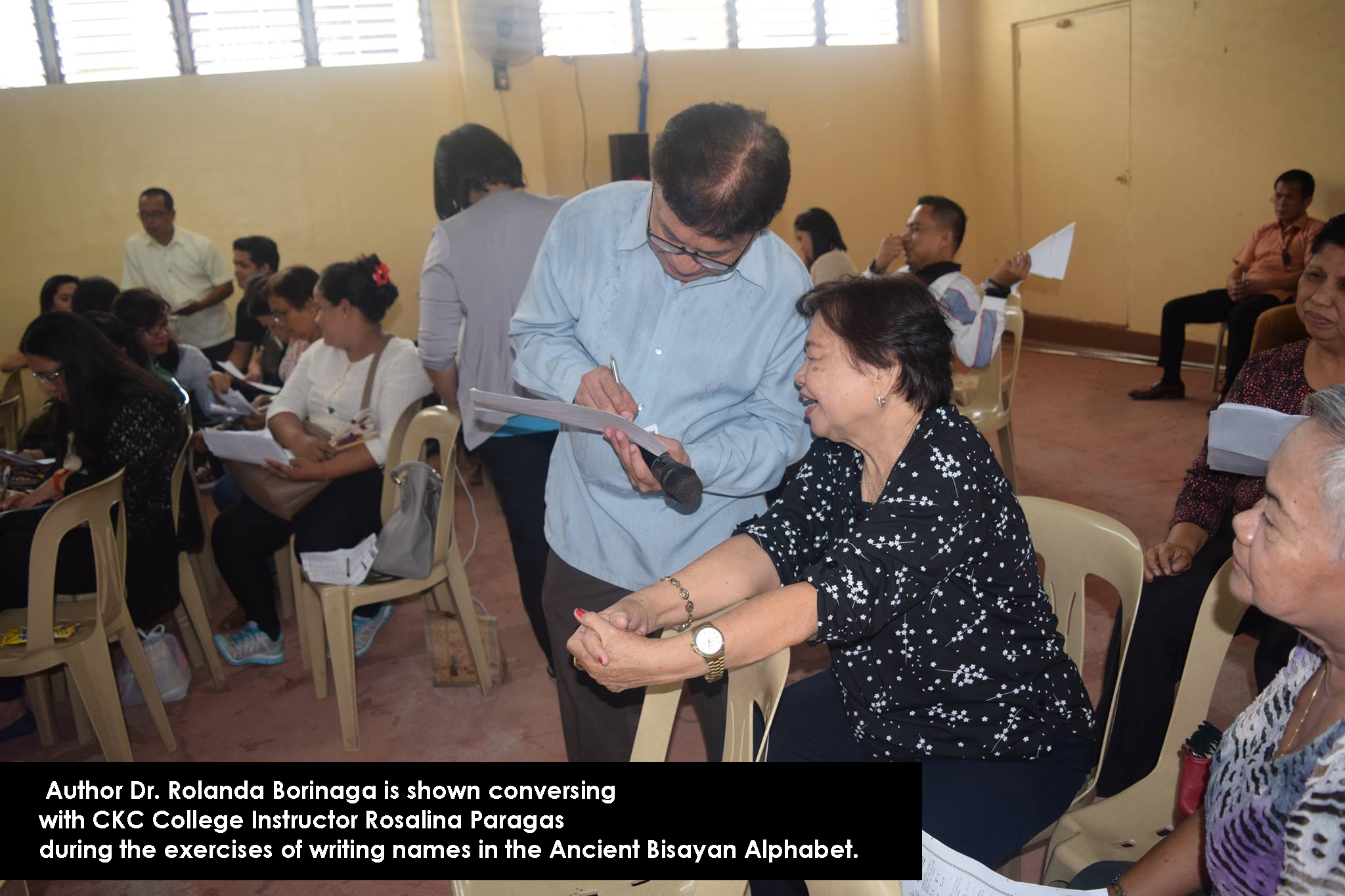 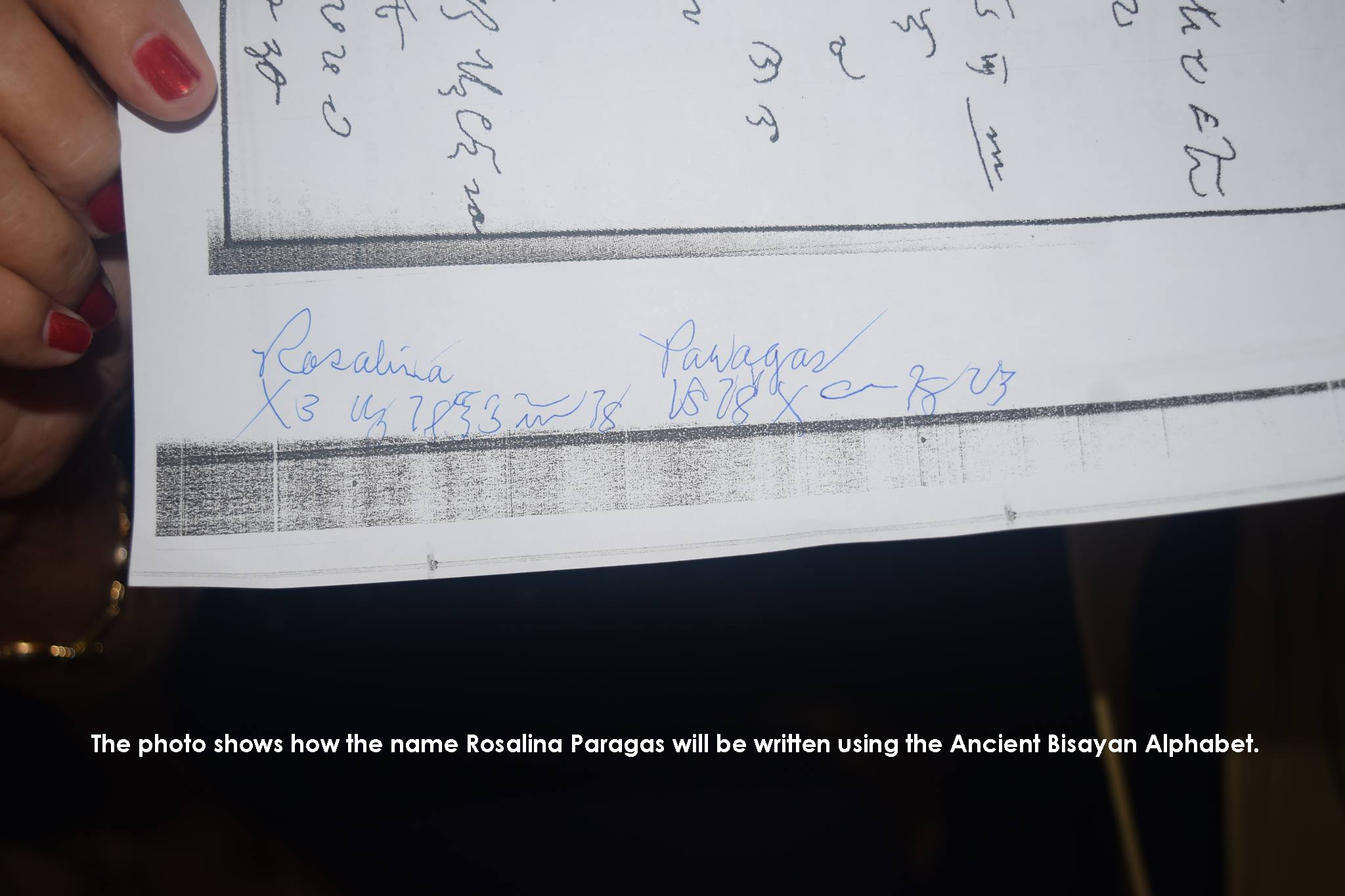 Be it as it may, I learned that early Filipinos were not ignorant. Neither were they uneducated nor savages unlike North American Indian contemporaries. Instead, they had their own rich language and unique way of writing as exemplified by the “Tagalog Baybayin” or the “Surat Binisaya.” Whichever came first is not really an issue. But in matters of how we decipher ancient writings is really important for us to determine on whose language it was written. I think Professor Borrinaga has deciphered the writings on most of the ancient artifacts from the Bisayan language point of view. Thanks to the help given by no other than our very own - the late Rev. Fr. Cantius J. Kobak for whom “Surat Binisaya” is dedicated.

I would commend Professor Borrinaga for acknowledging the importance of Fr. Kobak’s translations of Alcina’s accounts on Bisayan history especially his summary table of Samareño syllabic writings. Without this so-called “Rosetta Stone” he could not have made his decipherment of the ancient writings inscribed on the stones more accurate and believable.

Further perusal of the book, attests to the various interpretations given by experts here and abroad on how to decipher the meaning of those writings. The Calatagan Pot especially mentions several efforts on deciphering its inscriptions. Notable are the leaders in the field like Tolentino, Francisco, and Potet and the most recent attempts by Guillermo, Oropilla, Guillermo and Paluga. 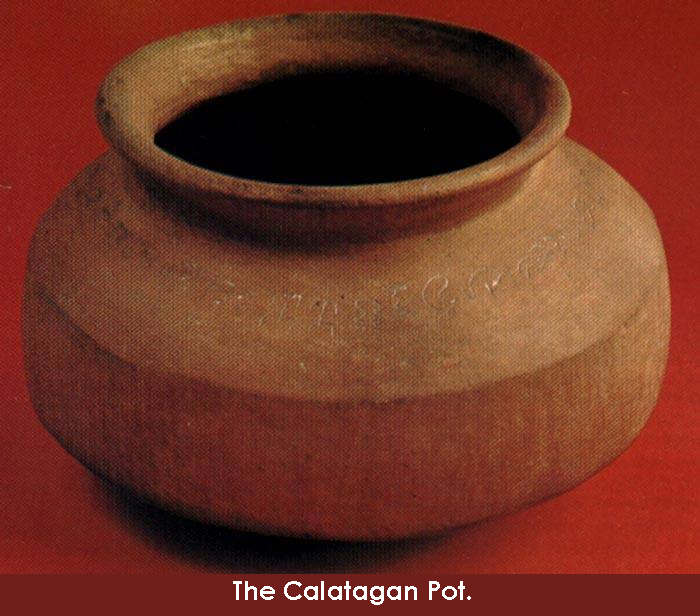 This work on presenting and consolidating these efforts at deciphering the Calatagan Stone is important for readers to compare and contrast the works and be able to come up with their own personal views based upon the various efforts. However, with the observations of Prof. Borrinaga at the end of every chapter, the reader, especially the Bisayan reader, is made to infer from the explanations furnished by the author on the whys and hows behind the words written on whatever material it was seen and scrutinized.

Looking into his process, findings and notable observations, let me quote from his own words what Father Cantius had to say about pre-Spanish culture and beliefs:

“Fr. Cantius J. Kobak, OFM, had published an extensively-documented paper that describes the pre-Hispanic concept of divinity, spirit-world sacrifices, and rites and rituals among the Bisayans in the Philippines. He noted that, in lieu of the stone temples elsewhere, the ancient Filipinos had the nunuk or dalakit - dakit in this paper - which was the “Living Temple of the Bisayans: its roots in the underworld, its trunk in the world of [the] Bisayans, and the earth itself and its extensive branches reaching out to the heavens!”

No wonder then that the rituals exercised by the proclaimed/designated native priest or priestess (Babaylan, Tambalan, or Herbolario) are very important either to appease the spirits or guide everyone in their daily endeavors either in land or in sea or elsewhere.

Mention is made about a classic short story titled “The Summer Solstice” by Nick Joaquin - adapted into a sex-spiced feature film title Tatarin in 2001 - which tells about a ritual performed by women to invoke the gods or spirits to grant them the blessing of fertility by dancing around a balete tree that was a century old.

The writings on the Calatagan Pot would attest to the presence of these rituals performed in ancient Philippines by Babaylans.

The author also did transciptions, decipherments, and translations of giving some notes on the Monreal Stones (previously Ticao Stones), both the round and the trapezoidal stone, and equally with ancient baybayin writings. The round stone served as a sinker for the ordinary net or pukut and its writings would signify negotiating with the spirits not to be offended if the nets would be set outside the limits of the boundary of the seas.

The writings on both sides of the trapezoidal stones were also transcribed. Side A contains an outline for a live ritual drama which purpose was to avert material and human loss from fishing or sailing in adverse sea conditions. Side B was mostly debated because of a controversy among experts saying that the stone artifact was probably a modern day hoax, because it seemed to look modern. However, the author would translate the words as a humorous tale of a botched attempt of a man to woo a woman, revolving around a Bisayan proverb that translates as “Gift of Affection should be humbled because it just comes closer to many others.” 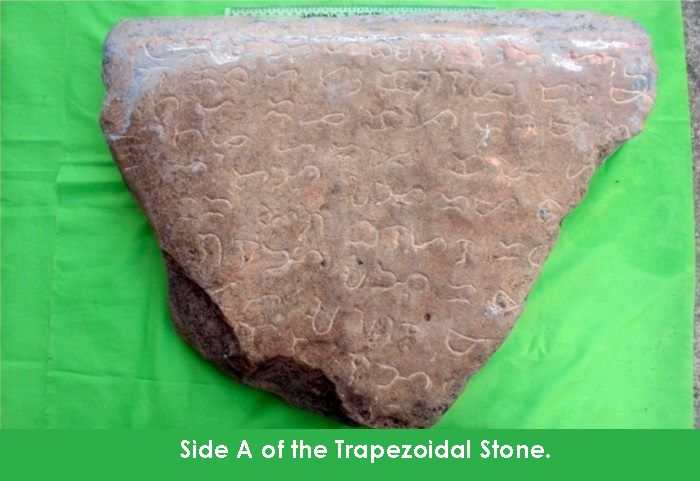 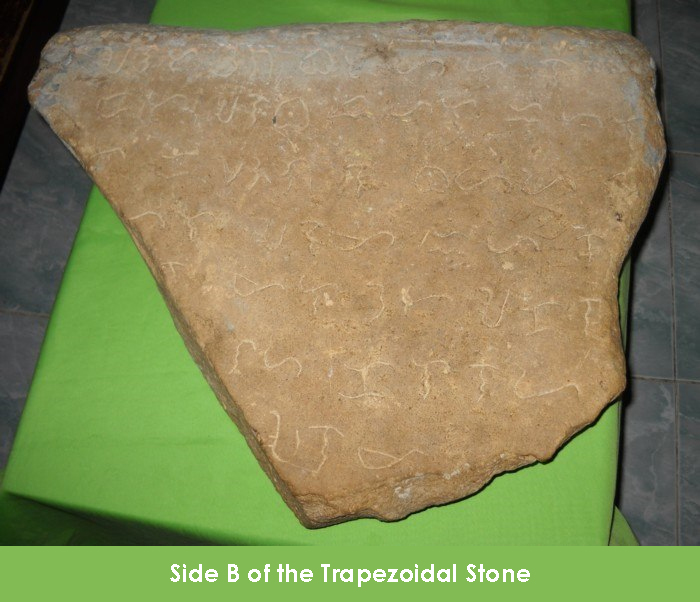 While the Intramuros Pot Shard was of Roman Script and not Baybayin. The Limasawa Pot was indeed a Bakalag (Human Sacrifice) ritual artifact as gleaned from its writings.

In closing, I would like to recommend this book to our teachers especially teaching social studies, literature and the like. This would be a very good reference book especially on Bisayan language which are already being forgotten especially by the so-called millenials. This is the only way by which we could preserve our original language and our heritage as Bisayans or Warays in particular. Others who are interested in knowing the secrets to the writings and the thoughts behind these particular works are also invited to really have the time to get a copy and read. It is only through these historical works that we are able to revisit our past and be able to appreciate the works of our ancestors and thus preserve our heritage.(CJ) 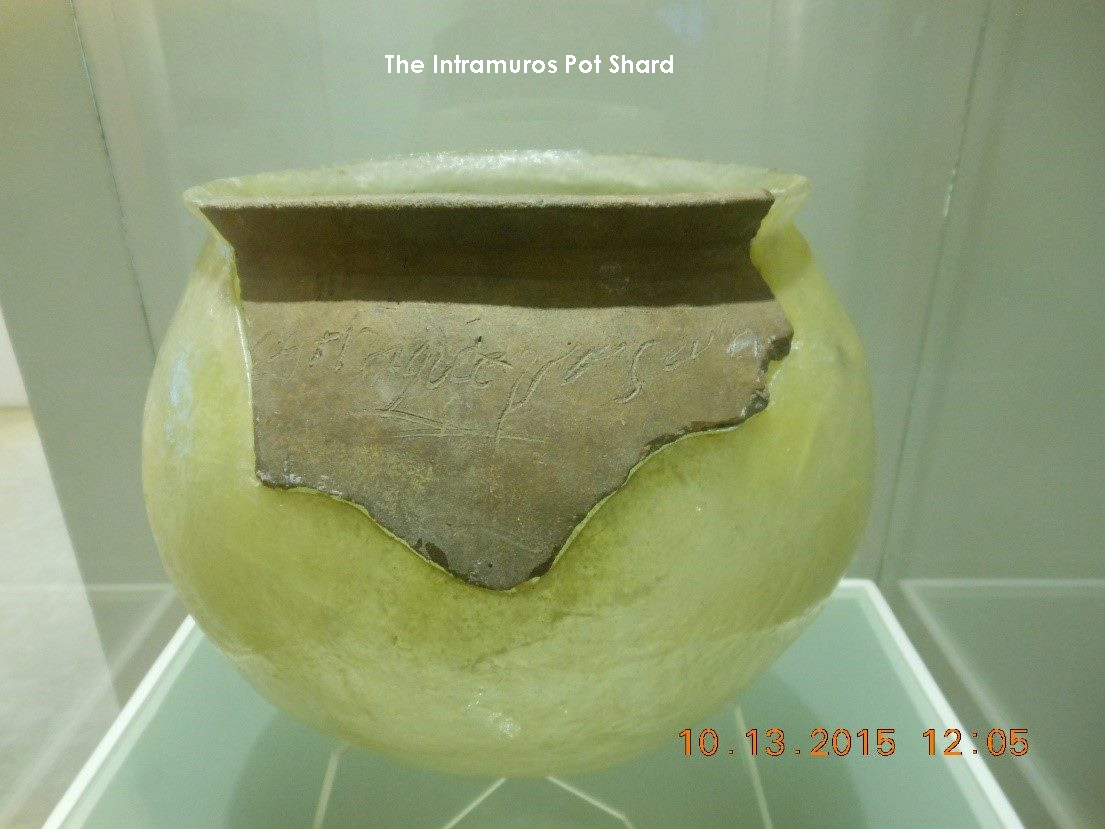