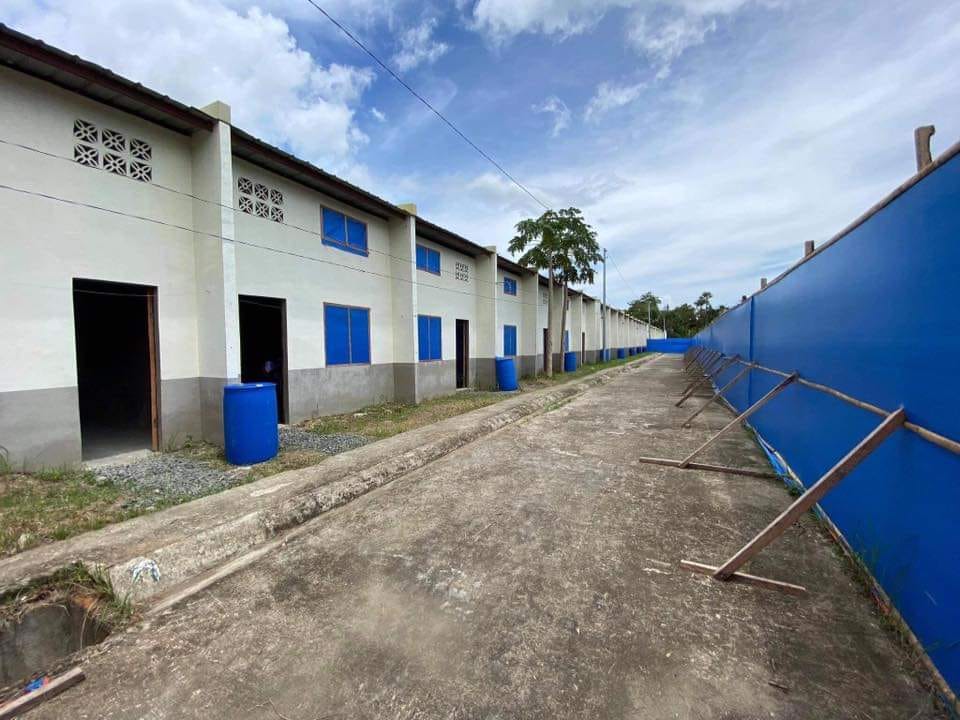 In the photo is a partial view of the Braveville Ligtas COVID Center in Barangay Palanas Cara. The facility was inaugurated in September 30, 2020. As of this posting, 49 individuals whose swab results turned positive of COVID 19 are housed in the area. . .246 units has been allowed by the National Housing Authority.
CALBAYOG CITY - The city government here opened a new Ligtas COVID Center in September 30, 2020 at Braveville Subdivision, Barangay Palanas Cara in addition to the existing facility in So. Talahib, Barangay San Policarpo as number of COVID-19 positive cases in the city surged during the last two weeks of September recording the highest in a day at 51 positive cases on September 29.

A day after its inauguration, the facility immediately housed 49 COVID-19 cases from a reported 51 positive cases out of 245 swab samples collected by the City Health Office as beefed-up by the Regional Epidemiology Surveilance Unit of the Department of Health - Eastern Visayas last Sunday, September 27.

Assigned Camp Manager Rolando Saplad, Jr. informed Calbayog Journal that the facility is solely for isolation of COVID-19 positive cases in the City.

"These are housing units which can accommodate 3 persons and ideal for families who are altogether infected with the virus and, however small, each unit are with the amenities of toilet & bath, wash sink, sleeping quarters that will make our occupants feel at home while in isolation," the camp manager told.

City Engineer Ashley Albaña said that the city government was allowed the use of 256 unoccupied housing units in Braveville Subdivision.

"Braveville is a project of the National Housing authority intended for the officers and men of the Philippine National Police (PNP) and the Armed Forces (AFP)," Engr. Albaña said and further told that "the request of City Mayor Ronaldo Aquino was addressed to OIC-Regional Director 8 Marilyn Lauzon in July 2020."

"Works to prepare the area which included installation of electric lines and connections to the area, temporary fencing and isolation walls were immediately implemented as soon as approval from the NHA came," the city engineer said.

"Water supply, however, will be provided by the Bureau of Fire Protection (BFP) on a regular rationing schedule since there are, as yet, no water pipelines towards that area," Albaña added. 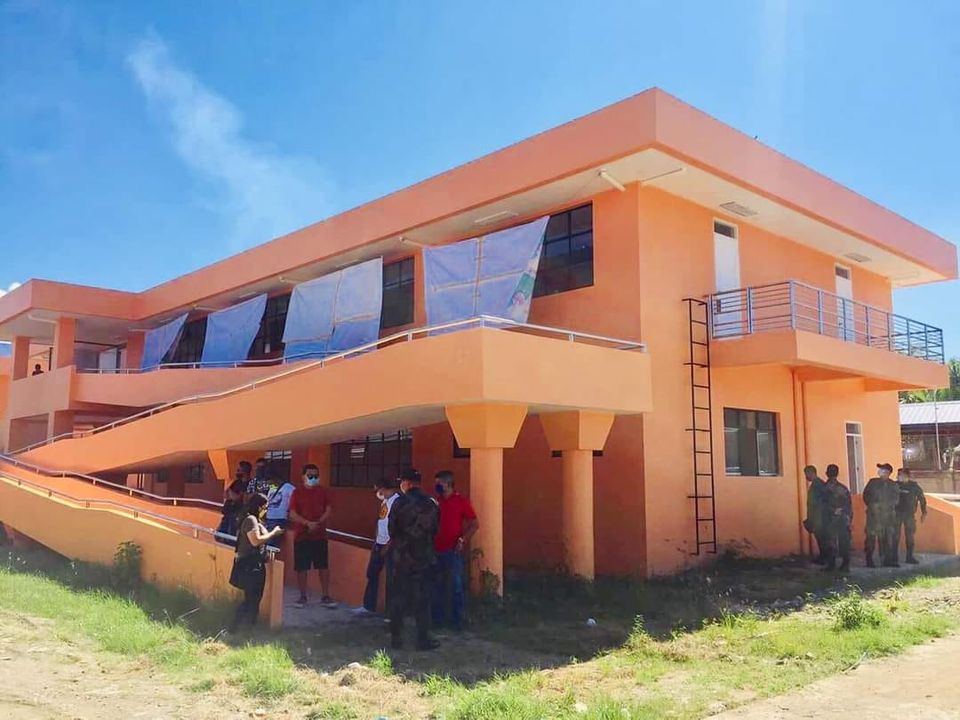 In the photo is the first Ligtas COVID Center of Calbayog City (Inaugurated in April 12, 2020). As of this post, there 95 occupants of the Center.
FIRST LIGTAS COVID-19 CENTER IN TALAHIB:

The first Ligtas COVID-19 Center is situated in Sitio Talahib. The building is intended to be an evacuation center but which was used by the city government as isolation facility for COVID positive individuals as early as April this year.

According to its Camp Manager, Dr. Timothy Paul Villanueva, the facility in Talahib is now populated to a peak of 95 isolated individuals. 89 of these are tested positive of COVID 19 virus while 6 of them are still suspects awaiting schedule for swabbing but are already isolated being direct contacts as family members (such as husband, children, siblings) of positive-tested individuals.

"Just like in other isolation/quarantine facilities of the city and the new Braveville Ligtas COVID-19 Center, regular meals are served to the occupants three-times-a-day free if charge," Camp Manager Villanueva informed.

Calbayog Journal was informed that those admitted to the center are individually provided with a daily dose of Vitamin C and sanitary kits containing alcohol, facemasks/faceshield, bath & detergent soap, etc. 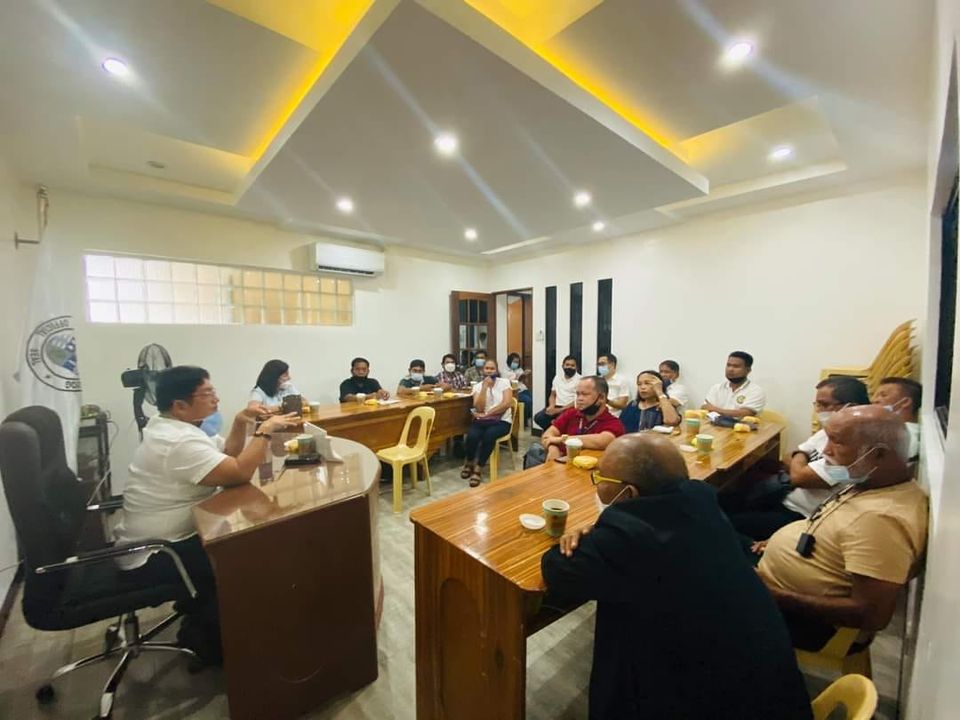 In the photo are the members of the Inter Agency Task Force of Calbayog City during inenof ita meetings as Presided by City Mayor Ronaldo Aquino.

It was reported during the last meeting of the Inter Agency Task Force in September 30, 2020, that the total number of positive in Calbayog City has reached a total of 232, with 81 recoveries and 150 active cases (that includes 1 tested at Divine Word Hospital in Tacloban City). Only one death is recorded.

Added to the active cases are the ten (10) new positive cases reported by the Department of Health in Eastern Visayas on October 1, 2020.

The third Ligtas COVID facility is located at Calbayog District Hospital presently housing (in isolation) 5 patients and 13 health workers of the hospital. This facility is managed and funded by Samar provincial government.(CJ/JMM)