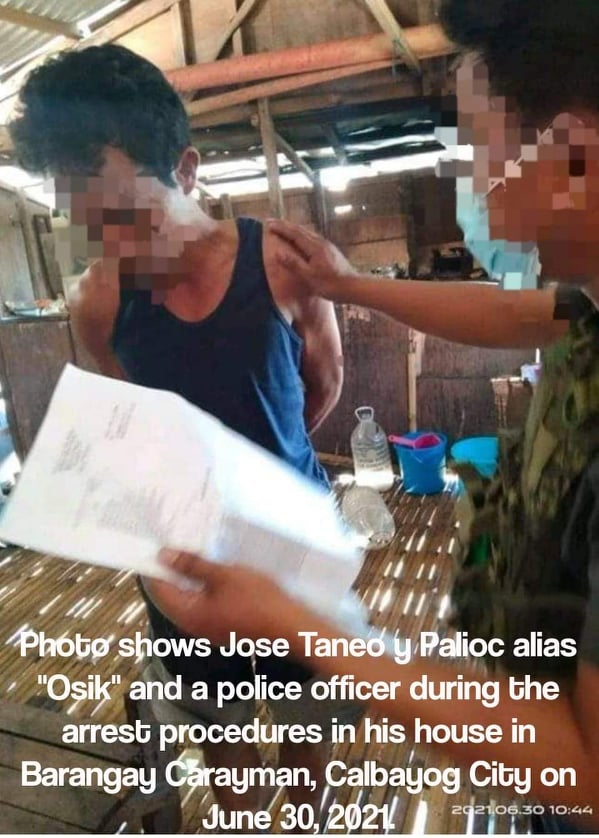 A wanted person believed to be a leader of one of the private armed groups reportedly operating in the city was arrested at around 11:45 AM, June 30, 2021 at his residence in Barangay Carayman, a village located some 5 kilometers south of downtown Calbayog.

After about one week of surveillance thru the Intelligence Operatives led by PMaj Ruel Burlat under the command of OIC-Chief PLt.Col. Rodolfo Albotra, Jr. the arrest operation was made by joint forces of Calbayog City Police with First Samar Provincial Mobile Force Company led by PMaj. Marino Azur G. Estonio.

Now in the detention facilities of the Calbayog PNP Headquarters in the city’s Barangay Bagacay, is Jose Taneo y Palioc alias “Osik.” He is 47 years old, Farmer, with live-in partner, and a native of Brgy. Tigbe, Calbayog City but presently residing at Brgy. Carayman, Calbayog City.

Alias “Osik” is reportedly the leader of the Taneo sub-group of a private armed elements operating in Barangay Tigbe, in the Upper Happy Valley area of Calbayog City.

The police report states that the arrest was made by virtue of two Warrants of Arrest subjecting Taneo – one dated August 20, 2019 for Criminal Case No. #C-7528 for Robbery with Homicide and Frustrated Murder issued by Judge Alma Consuelo B Desales-Esideria of RTC Branch 20 in Catarman, Northern Samar and another issued by RTC Branch 31 Presiding Judge Reynaldo B. Clemens, dated May 12, 2021 for Robbery with Homicide denominated as Criminal Case No. C-75-28. No bail is recommended in any of the cases.

Meanwhile, investigator PCpl. Hajji Nacinopa informed that no firearms or any contraband were confiscated or taken from the possession of Taneo during the arrest procedures.

On the other hand, Calbayog Journal gathered from one of the interviews of PMaj Burlat that Taneo is accused in 2 incidents of Robbery with Homicide in Calbayog City – one committed in Barangay Tarabucan victimizing a lending service cooperative that was divested of cash and caused the death of one employee and the other in Barangay Obo-ob when a business person was ambushed, killed and robbed of money.

Further it was known that the arrest warrant issued by the RTC in Catarman, Northern Samar, subjects Taneo for the incident committed in Lope De Vega involving the husband of a Punong Barangay in one of the villages.

It was further gathered based on the records of Calbayog Police that Taneo sub-group was one of the active armed cluster that was active in Barangay Tigbe during the 2009 elections.

Calbayog City Police Station thanked the people in the community who provided them assistance in gathering information thereby assuring the people that Calbayog Police is always on the move in search, identification and locating criminals in order to make them pay for the consequences of their crimes within the bounds of the law thus bring justice to the victims.

The people in villages of the city is also encouraged to get in touch with police forces for any information they can give that will lead to the arrest of criminals. The police assures confidentiality as to the identity of those who may have information to provide.(CJ/JMM)