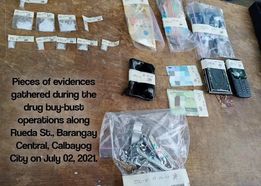 CALBAYOG CITY – A high-value individual in the drug watchlist of the PNP Region 8 and Samar Provincial Office was caught red-handed in a buy-bust operations conducted by authorities, led by Calbayog City PNP, on July 02, 2021 along Rueda St., in the vicinity of Barangay Central, Calbayog City.

A buy-bust operations jointly conducted by PNP and PDEA led to the arrest of Erwin Salurio who is listed as number 2 in Samar and number 4 in Eastern Visayas, among the drug watchlist of the Samar Provincial Office and Regional Office 8 of the Philippine National Police (PNP), respectively. Salurio is 39 years old, Graphic Artist, married and a resident of Barangay Obrero, this city.

During the operations, Salurio was in the company of another suspect who managed to elude arrest by running away from the scene upon noticing the presence of authorities in the area. Neilberto Pancito, of legal age, and a resident of Barangay Balud, this city, as identified by police officers, ran on-foot towards the direction of Barangay Aguit-itan (near Calbayog City hall area), leaving his motor bicycle behind.
The police report tagged Pancito as Salurio’s conspirator “in selling (1) piece of heat-sealed transparent plastic sachet containing white crystalline substance (believed to be shabu) worth Five Hundred Pesos (P500.00) to a police operative who acted as poseur-buyer.” The marked money bears Serial Number DY832063.

During the arrest procedures, the police recovered from the possession and control of Salurio, among others, several sachets (in various sizes and quantity) of the white substance suspected to be “shabu” totalling about 5 grams (with an estimated value of Php34,000.00), cash money in the amount of Php10,185.00; the marked money, keypad Nokia phone and other personal belongings. 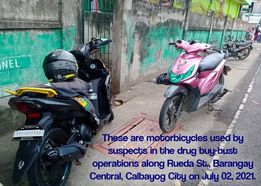 Also included, brought and placed under the custody of the police, are: one (1) unit Yamaha Mio 125, motor bicycle black and yellow with temporary plate no. 0801-0393220 believed to be the vehicle used by Pancito; and one (1) unit Honda Beat single motorcycle, color black and pink with plate no. 6098 HS allegedly used by Salurio.

True to the assurance of Calbayog PNP OIC-Chief PLt.Col. Rodolfo Albotra for unrelenting efforts against illegal drugs and the untiring labor of the PNP for a lasting peace that Calbayognons deserve, Calbayog PNP has kept its watch over criminals and illegal activities.

“Our efforts against illegal drugs which is the menace of the society is continuous and aggressive just as Calbayog City Police will not stop until the people of the city will have a lasting peace and harmonious life that Calbayognons deserve,” Calbayog PNP OIC-Chief Albotra said.

According to reliable information, Pancito has records of drug buy-bust cases. He was acquitted in one case and is still serving his sentence under the probation program he availed as a plea-bargainer in another.

Meanwhile, the name of Salurio reportedly figured as one of the sources of the illegal drugs in Calbayog City, when he was allegedly named by another illegal drug-dealer-suspect who was arrested in one of the drug buy-bust operations in Catbalogan City four months ago, more or less.