With Reports from ELEEN LIM
Photos by Calbayog Journal 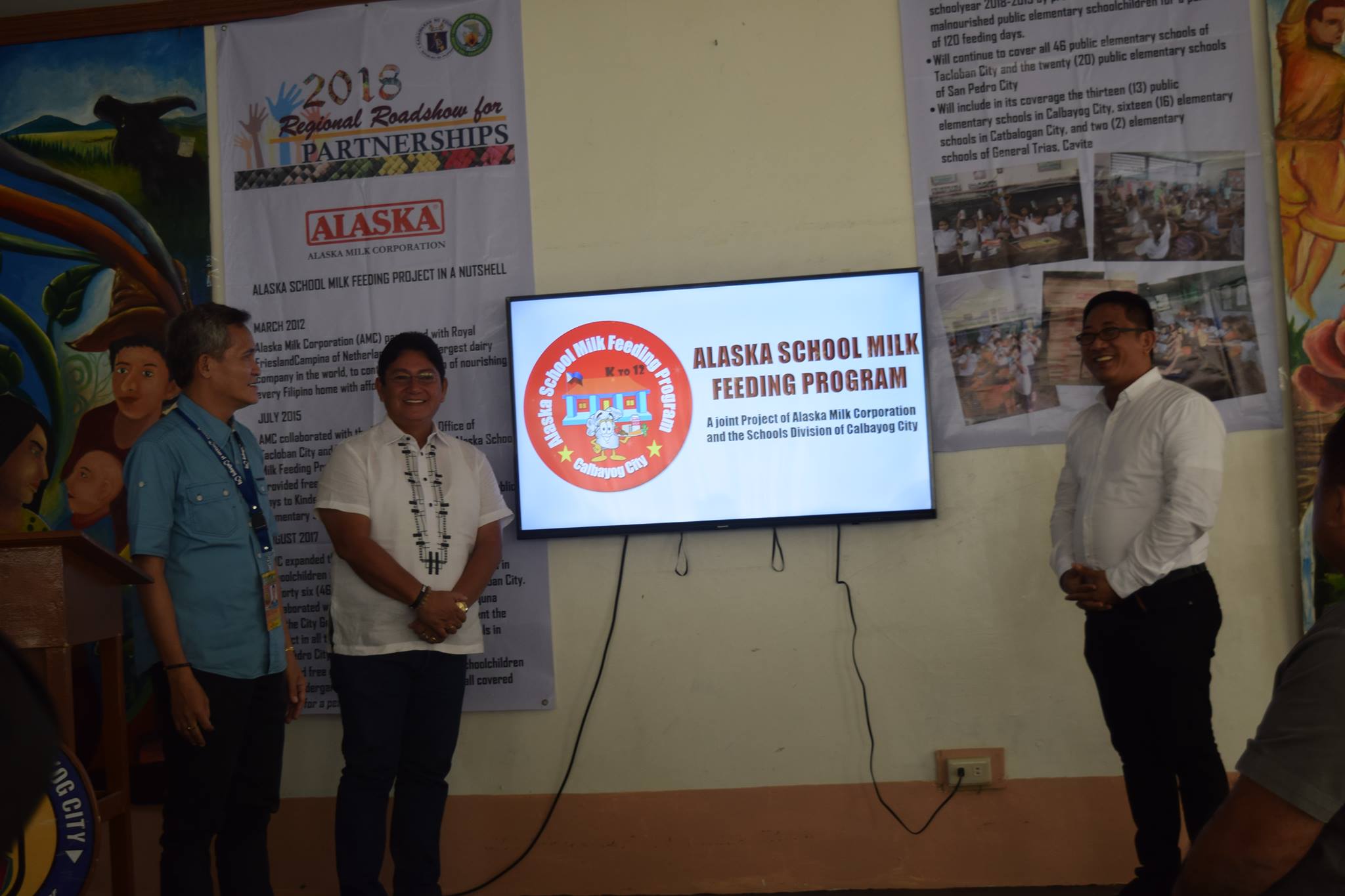 A Memorandum of Agreement (MOA) setting the terms for the implementation of Alaska School Milk Feeding Project has been effected between the Department of Education - Calbayog City Schools Division, Alaska Milk Corporation and the Local Government of Calbayog represented by Mayor Ronaldo P. Aquino having been granted authority by the Sangguniang Panlungsod presided by Vice Mayor Diego P. Rivera, to enter into such agreement.

The MOA primarily defines the assistance offered by Alaska to provide nutritional supplements for malnourished school children in the city’s public schools in the form of providing one glass of milk every school day for 120 days to children in public elementary schools which DepEd Calbayog and the City Government accept. Alaska will also conduct nutrition sessions for teachers and parents aimed at appraising participants on the importance and benefits of drinking milk. 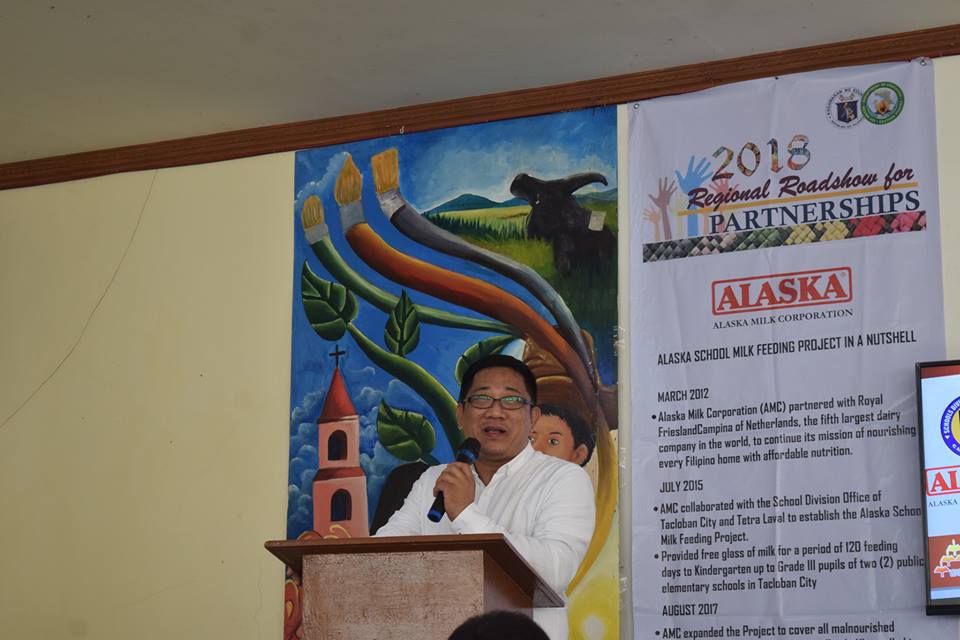 (Atty. Joemare Dema-ala as he delivers his speech during the MOA signing ceremony.)
In an interview right after the MOA signing, Atty. Dema-ala emphasized to Calbayog Journal that the implementation of the program in the city of Calbayog is the only Alaska School Milk Feeding program with an LGU component.

“The significance of implementing Alaska School Milk Feeding program in Calbayog is the fact that this is the only program that comprises the participation and support of the city government thru Honorable Mayor Ronaldo P. Aquino as authorized by the Sangguniang Panlungsod,” Dema-ala said.

Part of the obligation of the city government of Calbayog is to assign a program coordinator tasked to assist in the coordination, orientation and training of school beneficiaries as well as monitor and evaluate the implementation of the project. In addition, the city government will provide storage areas for safe storing of donated milk products and logistical support such as transportation to ensure the timely delivery of the milk, as well as enough supply of safe and potable water to school beneficiaries. 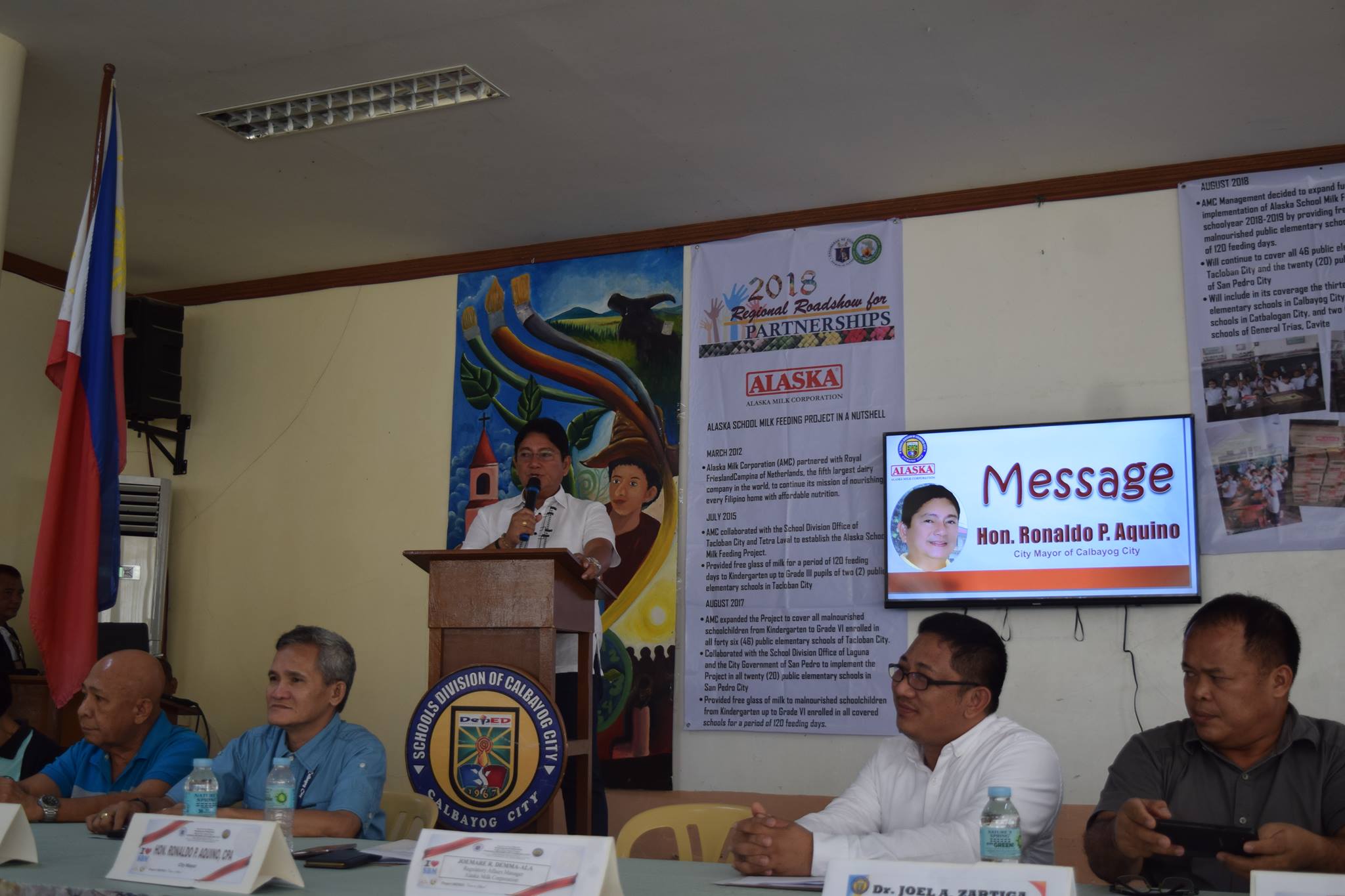 (Calbayog City Mayor Ronaldo. P. Aquino is on stage for his acceptance of the project.)
Mayor Aquino, in his speech, stressed that extending the program to Calbayog is a big help in addressing the malnutrition incidence in the city which comprises a little over five percent (5%+) of the city’s children population during the last assessment. The number is down from more than 26% ten years ago.

Mayor Aquino further told that “the help of Alaska thru its School Milk Feeding Project will hasten our nutrition programs to be able to meet our target of lowering our malnutrition incidence to only 2% of the children population by the end of this year.”

Meanwhile, DepEd Calbayog City Division is tasked to prepare the profile and other background information of identified recipient schools, ensure the proper management, maintenance and care of the donations, and require the school-beneficiary to assign a school milk feeding project coordinator who will oversee the proper consumption of milk by the school children during their respective feeding schedule. 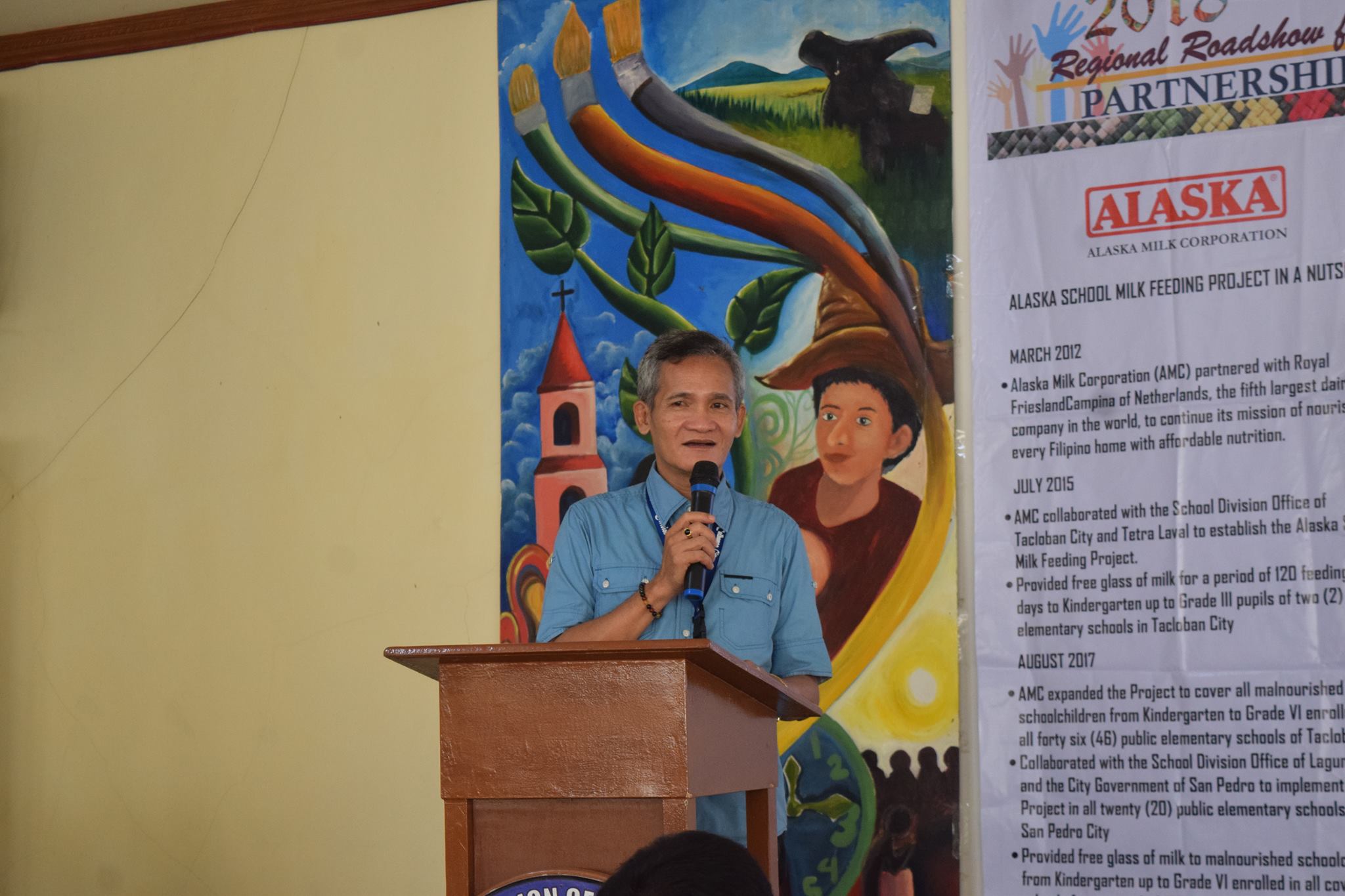 (Dr. Raul S. Agban as he thank Alaska Milk Corporation for making Calbayog City Public Schools one of the few beneficiaries of the Alaska School Milk Feeding Project)
Still waiting for the final enrolment list and incidence of malnutrition report, City Schools Division Superintendent Agban said that Alaska’s provisions under the School Milk program will help DepEd achieve its target of an improved quality of education and an increase in the participation rate of school children.

“Increase in the participation rate of school children is significant to an improved quality of education which is always our aim,” Agban told Calbayog Journal and further said that “we will be able to finalize the list of schools and its recommended beneficiary-school children when teachers will submit respective reports to the Division Office because we still have to conduct check-up and weighing of the children enrolled.”

Alaska Corporation, a business entity engaged in the manufacture and sale of milk and dairy products in the Philippines has declared that the total project cost to implement Alaska School Milk Feeding Project here in the City of Calbayog and 2 other cities in Region 8 (Tacloban and Catbalogan) is Ten Million Pesos, which includes the cost of donated milk products and other incidental expenses that maybe incurred during the implementation. The Corporation, in turn can avail of the Tax Incentives as provided for under the Adopt-A-School Act of 1998.(CJ) 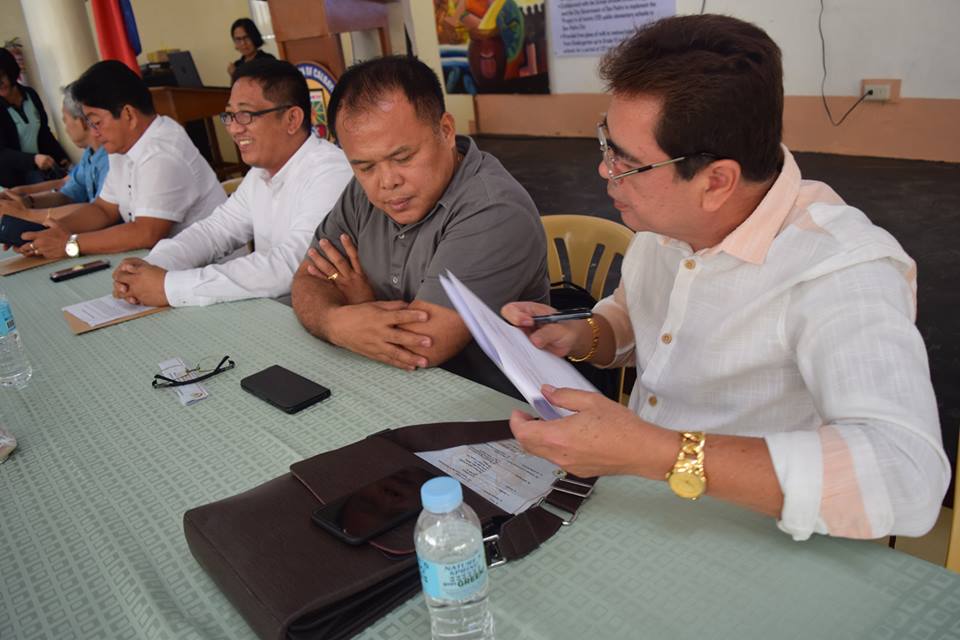 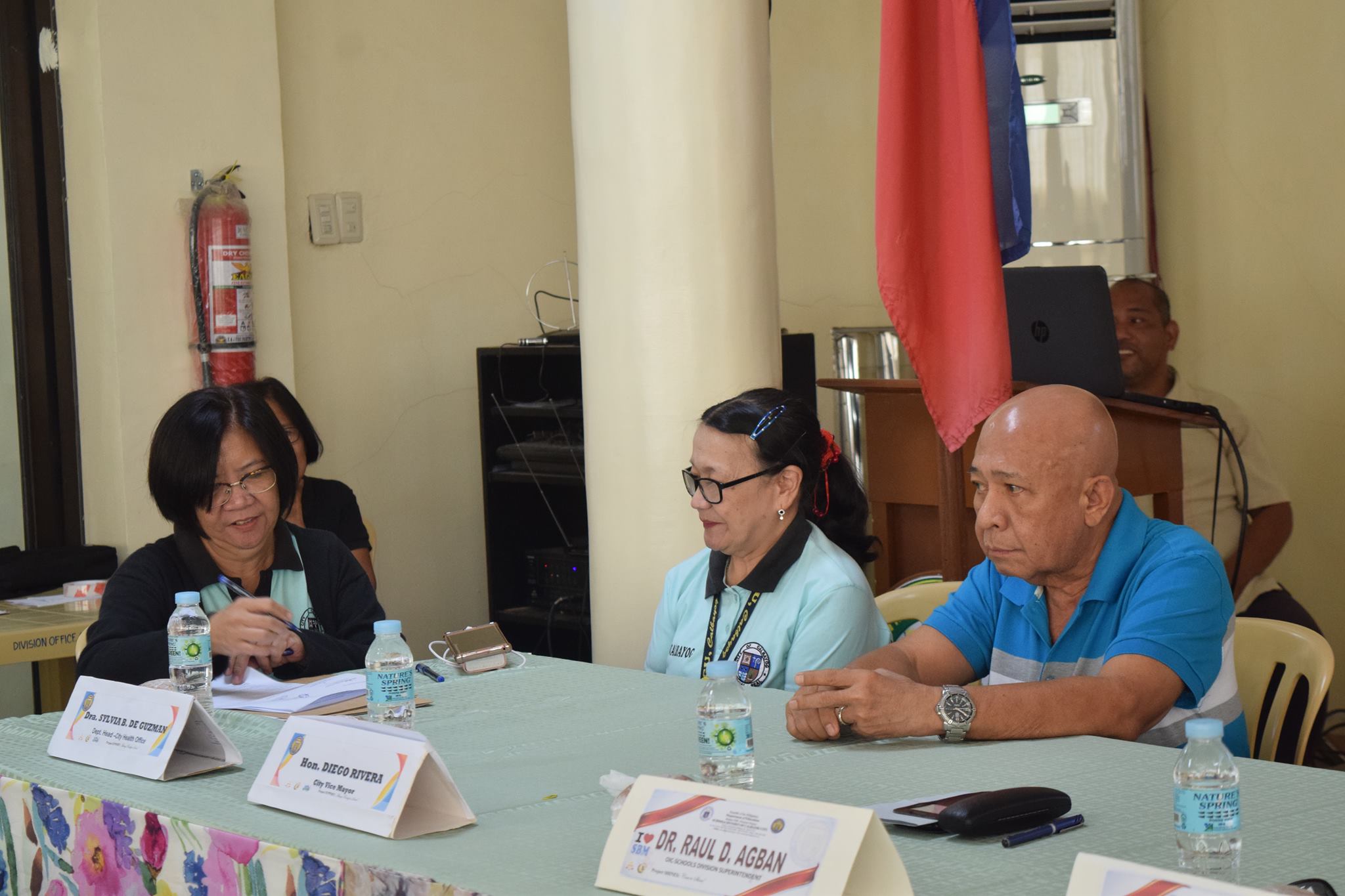 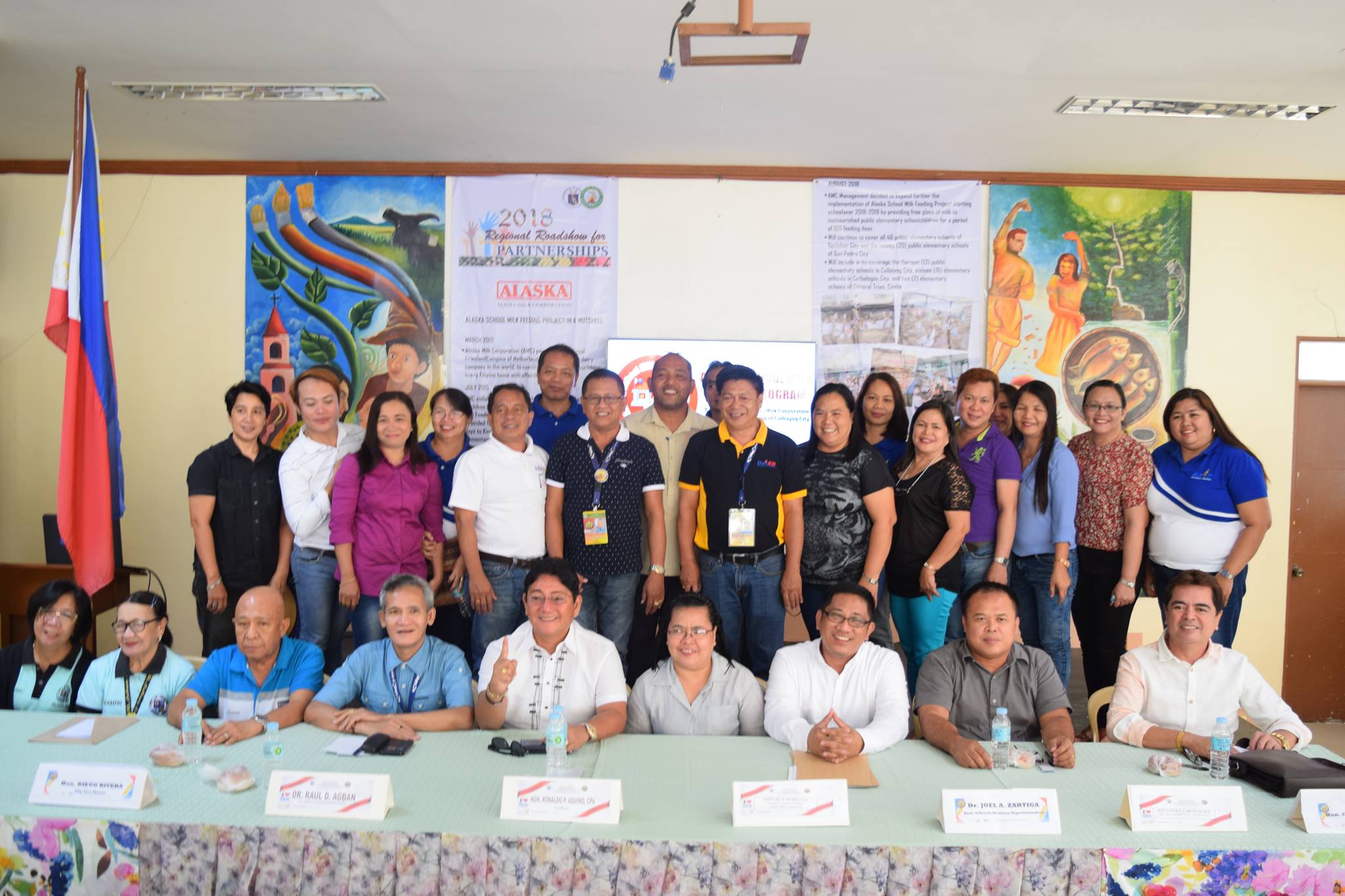