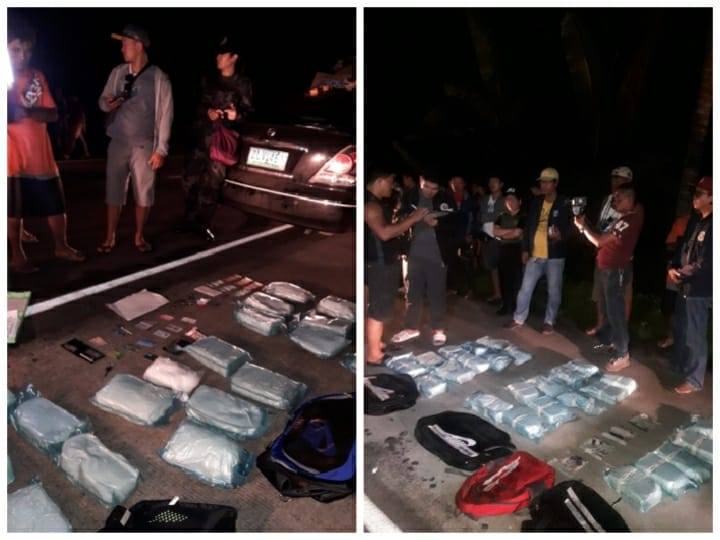 On the right is a photo of the 25 pack of suspected shabu confiscated from the silver-gray Mitsubishi Lancer; while the 19 packs of suspected shabu confiscated from the black Nissan Sentra is on the left photo.
FOURTY-FOUR (44) PACKS of suspected “shabu” allegedly bound for Cebu City was intercepted and confiscated while 6 suspects were arrested by authorities stationed at a check-point in Barangay Bunyagan (Purok 1), in the Municipality of Gandara, Samar at 4:30 in the afternoon or thereabouts, in October 17, 2019.

The information was coordinated by the RDEU, headed by P/Lt. Col. Harry Sucayre, and pitched to P/Capt. Joselito Tabada of the Samar PDEU.

A silver-gray Mitsubishi Lancer bearing plate number “XTE 453” was leading the convoy (of two vehicles) followed by a black Nissan Sentra with plate number “ZLV 463” when flagged down and found to both carry packs of suspected shabu contained in travelling bags.

Appearing to be the biggest accomplishments in terms of interception and/or confiscation of the prohibited susbstance by the drug enforcement unit of the PNP in Eastern Visayas, the confiscated suspected “shabu” from this particular operation, reached a total of 88.49 kilograms after official appraisal was conducted early morning of October 18, 2019. 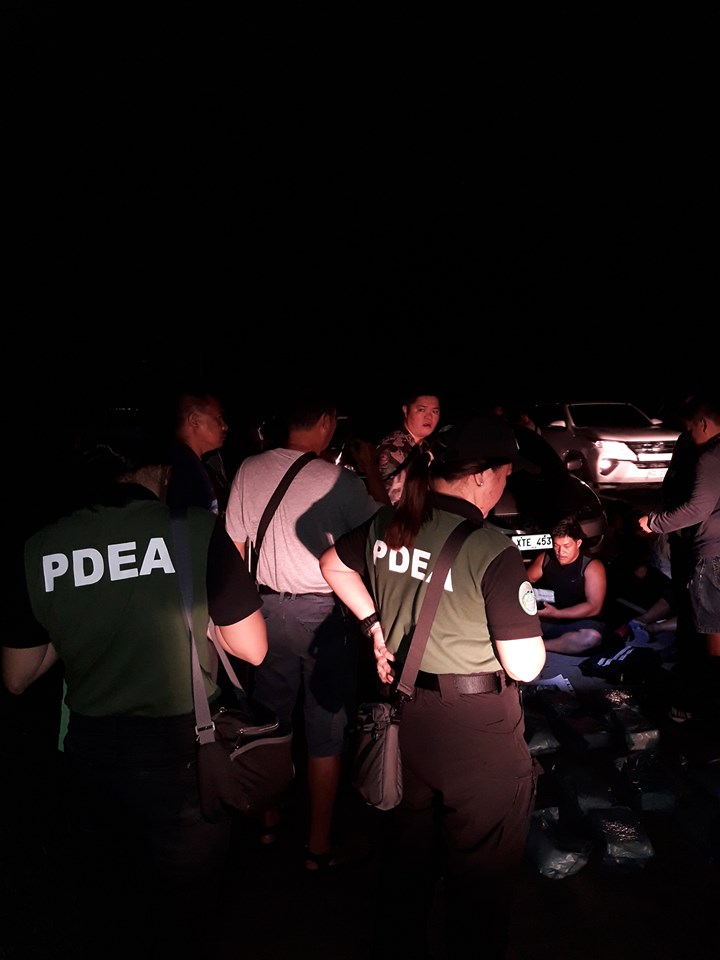 The photos show presence of PDEA Operatives during the inventory of the seized suspected shabu.
Full street value of the suspected contraband in custody (as seized from 2 vehicles) is estimated at Php601,732,000.00 based on information provided by PDEA authorities present during the inventory on October 17, 2019 that the street price of the contraband is Php6,800.00 per gram.

Six (6) suspects – three from each vehicle - were arrested in the operations. Cesar Uy, Steven Perez, both of legal age, and one male minor, Dennis (not his real name) were on-board the silver-gray Mitsubishi Lancer. In the black Nissan Sentra were Leonardo del los Reyes, Elberth Abella and Jeralou Laborte.

Two laboratory tests still needs to be conducted on the suspected shabu confiscated from the two vehicles before it can be officially considered as “methamphetamine hydrochloride.” Only after which will proper cases against the suspects can be determined for filing. 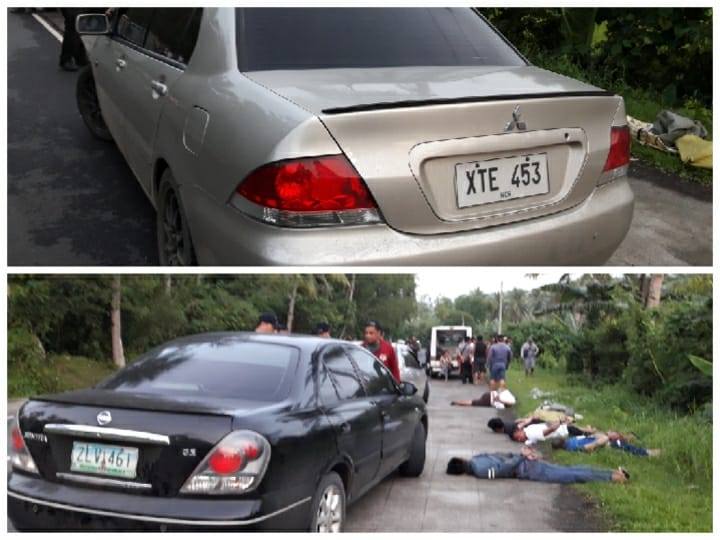 Photo shows the two vehicles used by the suspects in transporting the suspected prohibited substance.
SILVER-GRAY MITSUBISHI LANCER: Suspects Uy, Perez and the minor Dennis were on board the Mitsubishi Lancer vehicle that carried 25 blocks of suspected shabu contained in three travelling bags – two bags at the car’s back compartment containing 10 packs each and one at the back-passenger-seat containing 5 packs.

BLACK NISSAN SENTRA: Also 3 of the suspects on-board the Nissan Sentra were arrested, namely delos Reyes, Abella and Laborte. A total of 19 packs of the suspected illegal substance were confiscated in this vehicle. Two bags – one containing 8 and the other 6 packs – were found at the back compartment of the car while one bag containing 5 packs was located at the front passenger seat of the car.

While both vehicles carry appropriate Certificates of Registration and corresponding Official Receipts, the PNP will still need to conduct an investigation as to the veracity of ownership of both vehicles and authenticity of the registration. 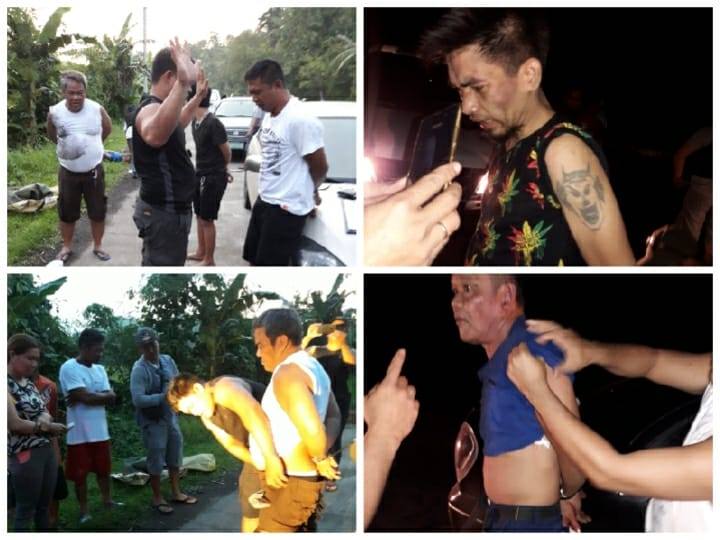 Four of the 6 suspected transporters of the contraband in the vehicles.
On interview by Calbayog Journal, Laborte (jobless a resident of Cebu who is 4-months pregnant by her live-in partner, also jobless) informed that she was requested by his neighbour delos Reyes to accompany him to Manila and back to Cebu for a fee of Php20,000.00. Admitting that it was her second trip of the same nature with his neighbour, she did not have second thoughts about going again.

“When money for our fare came, we immediately left Cebu on board an airplane to Manila,” Laborte told Calbayog Journal.

She further told that “from Manila airport, we immediately proceeded to a Jollibee restaurant in Imus, Cavite where we found the black car.”

“I was in the company of drivers Abella and de los Reyes as well as minor Dennis on board the black Nissan Sentra when we left Imus, Cavite,” Laborte said. 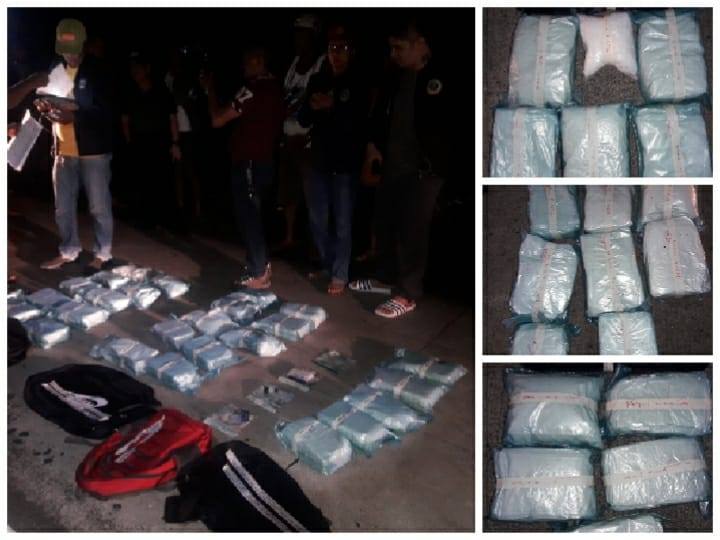 The photo shows the confiscated suspected contraband believed to have the same packaging with those found in the Municipality of Biri, Northern Samar.
Also second timers in the kind of trade and having received payment of Php30,000.00 during the first trip made in August 2019, Uy and Perez told Calbayog Journal that they were both without hesitations in accepting this second assignment.
Leaving Cebu via plane in October 15, they proceeded to SM North in Quezon City as instructed upon reaching Manila. Immediately, they found their designated vehicle at the mall’s parking area.

Asked who was giving them instructions, suspects Uy and de los Reyes gave the same answers. They told that a caller whose face and name they do not know are constantly in touch to give them instructions on where or which way to go and what to do.

Uy further told that “we do not know where and who our caller is but I feel like the caller sees us because right after we were seated in the car we were immediately asked to drive and proceed.”

On the statement of Laborte about minor Dennis being on the same black vehicle with her when they left Imus Cavite, Calbayog Journal asked why minor Dennis was separated from them and was already in the silver-gray vehicle during the arrest. Laborte answered that de los Reyes instructed minor Dennis to accompany Uy and Perez when they met-up in The Coral Reef Beach Resort for lunch. 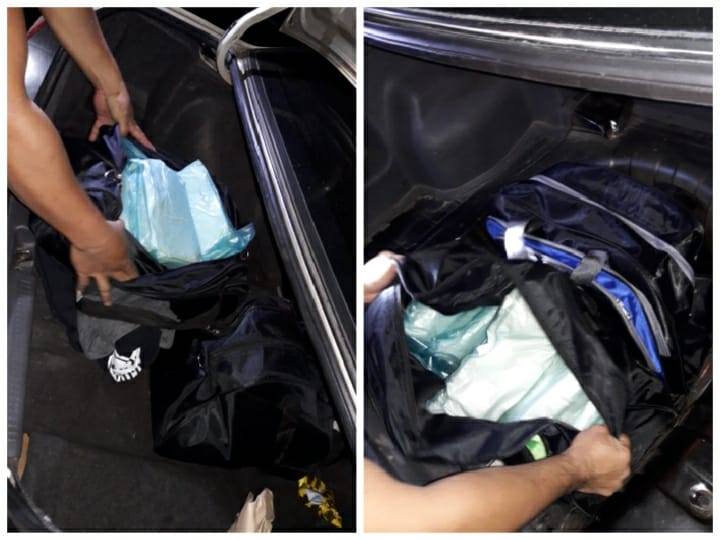 Photo on the left shows the back compartment of the silver-gray vehicle while photo on the right is that of the black vehicles back compartment.
“The other group on board the black Nissan Sentra was already at The Coral Reef Beach Resort when we arrived for lunch as previously instructed by our caller during the time when we were at the ferry boat terminal in Allen,” Uy told Calbayog Journal.

Uy further said that “minor Dennis started riding with us in the car when we left The Coral Reef headed towards the direction of downtown Calbayog where we expected to take the Lite Ferry boat to Cebu, as instructed by our caller.”

“On our way, however, we were instructed to proceed towards the direction of Ormoc City as there was no Lite Ferry available for Calbayog-Cebu route and our caller was hurrying us up,” Uy continued.

Minor Dennis who, by his school ID, appears to be a Grade 8 school drop out in 2018 from one of the schools in Cebu City, told Calbayog Journal that he joined the group of transporters because he badly needed money and de los Reyes is an uncle he trusted. Minor Dennis however, does not give any reason why and what he needed the money for.

“This is my second experience in this route and I did not expect to be arrested,” minor Dennis said and continued to tell that he is not a user of “shabu.” 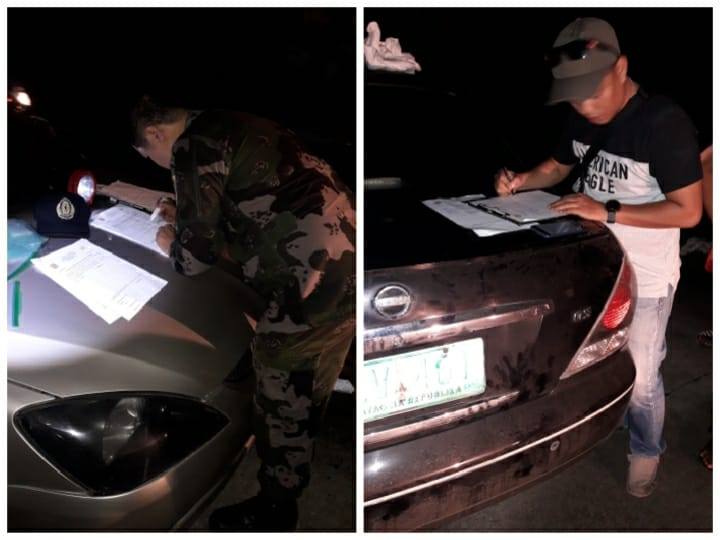 Inventory of Properties/Materials Seized conducted separately but simultaneously on the two vehicles ferrying prohibited substance that were intercepted in Barangay Bunyagan, Gandara, Samar.
Abella said it is also his second and was expecting a pay higher than Php30,000.00 that he was paid after their successful trip the first time in August 2019.

Uy and Perez did not tell the specific role of minor Dennis in the transport of the contraband. On the other hand, Laborte told that de los Reyes just wanted him to be in the company of the group during the transport from Manila to Cebu.

Expenses for meals and fuel during their travel time from Manila to destination is provided thru any of the nearest service providers at a particular location.

“We are budgeted at Php60,000.00 per trip for both vehicles but it is not given to us in lumpsum. We pick partial amounts as they deem necessary,” de los Reyes said.

All of the 6 arrested suspects are jobless residents of Cebu City. In the meantime, they are presently in the custody of the police authorities in the Municipality of Gandara where they underwent Inquest proceedings. Their custody will be turned-over to the PNP Regional Command soon after their medical examination.

Seizing on suspects and of cargos in the silver gray vehicle was performed by PSSgt. Noel M. Cebu while PSSg Raffy Manoso did the job on the black vehicle. Both seizing procedures were made in the presence of Barangay Officials of Bunyagan and media practitioners.

Inventories of Property seized from both vehicles were witnessed by 2 media practitioners, 2 DOJ officers and 2 Barangay Officials.(CJ) 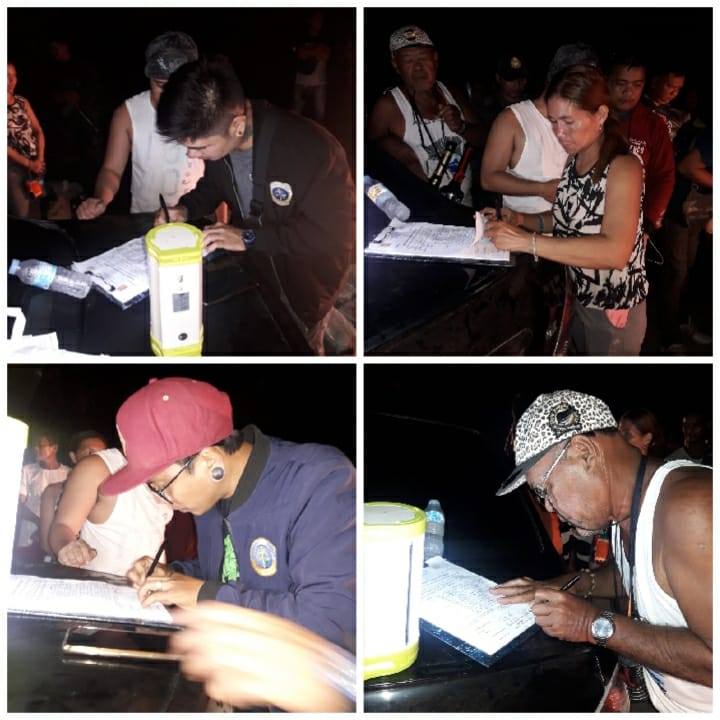 Signing of/Witnessing to the Inventory of materials/properties seized on both vehicles.