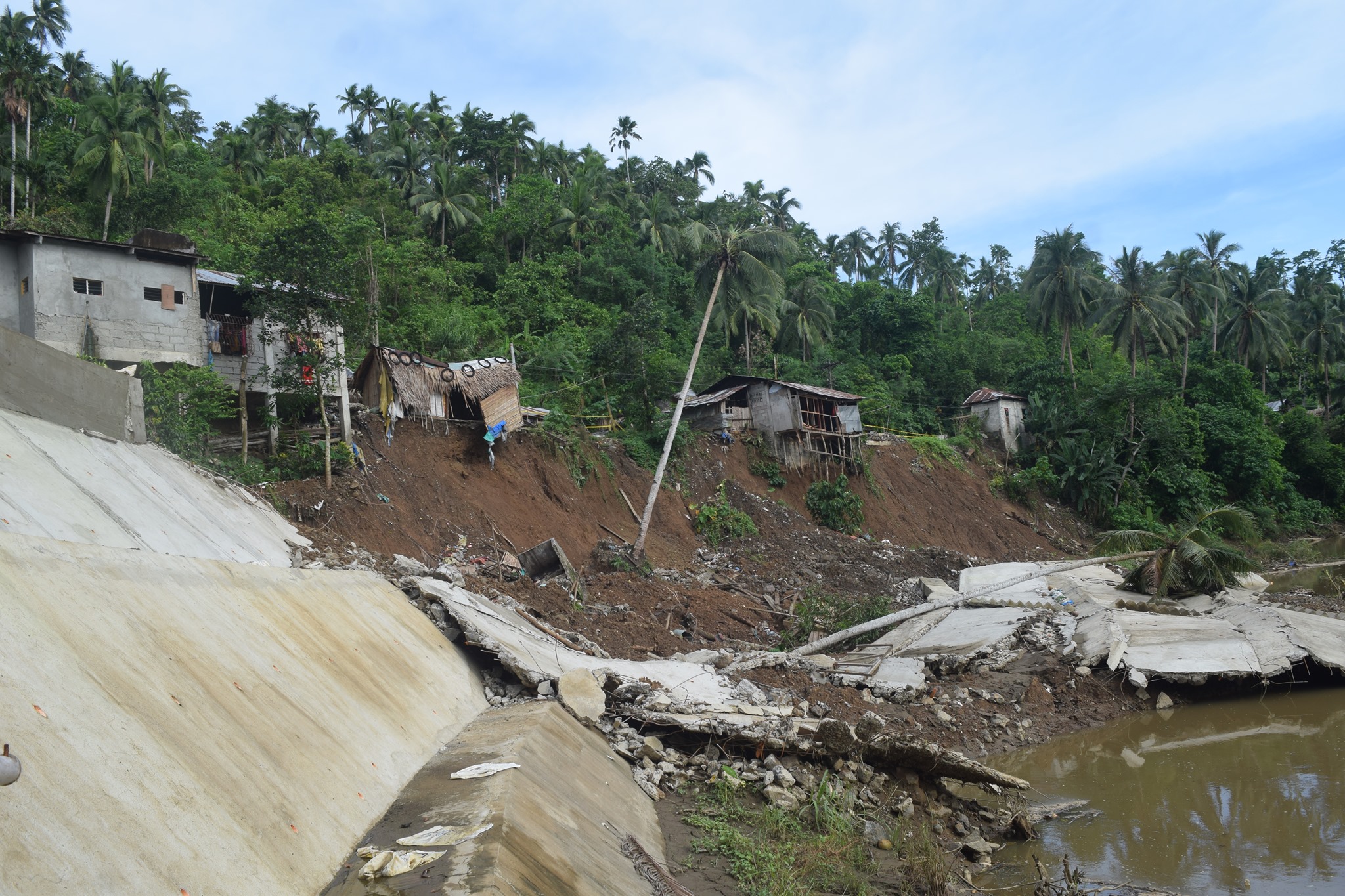 The photo is taken from the north side of the area where the collapsed part of the flood control structure is seen. On top of the precipice are the 3 houses that were affected by the collapse.
CALBAYOG CITY – Part of the accomplishments of an on-going flood control project collapsed. Except for minimal damages to properties affecting 3 households, no casualties were reported.

Several meters of the accomplished part of an on-going flood control project came apart and crumbled down to the bed of the river in the night of June 10, 2020.

The incident happened in (the vicinity of Purok 1) Barangay Nabang, Oquendo District at the height of prolonged and continuous heavy rains that started mid-afternoon and lasted until late night.

According to the residents in the area, the rain continued until midnight even after the collapse of the structure.

The collapse eroded with it a portion of the soil walling of the precipice where on top is Maharlika Highway.

The erosion affected 3 houses built along the highway and on a brink where below runs Hibatang River.

No one from among the occupants of the 3 houses or any individual in the area were reported injured. 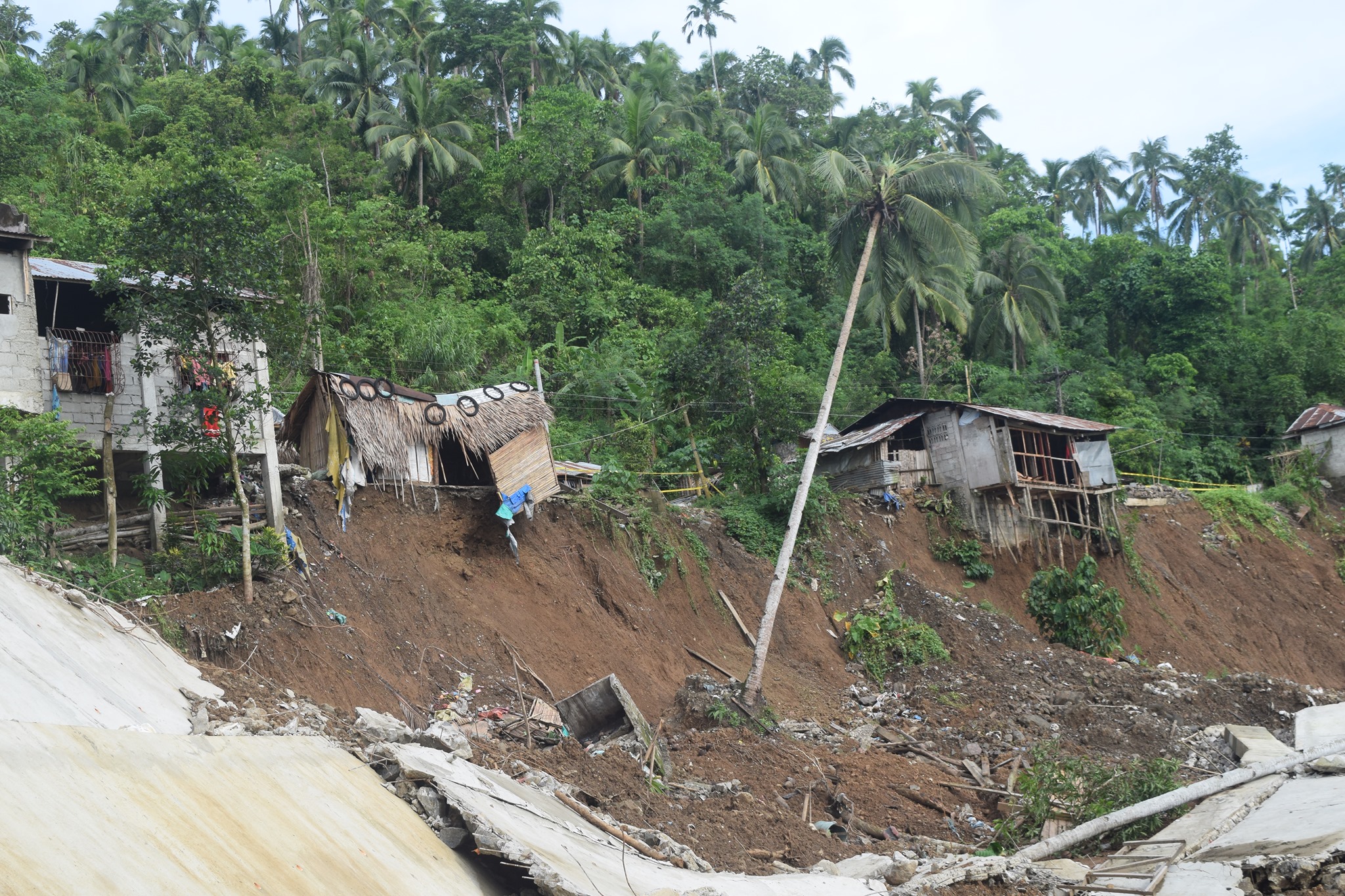 A closer look at the 3 affected houses.
STRUCTURE DAMAGE ASSESSMENT:

In the inspection report submitted to District Engineer Alvin Ignacio of the Department of Public Works and Highways - Samar’s First District Engineering Office (DPWH-SFDEO), Project Engineer Hendrix Ortega informed that based on his inspection the collapse was caused by saturation of the soil due to continuous heavy rains.

In an interview, Engr. Ortega told that it has already been several successive days during the week when heavy rains would continuously fall for several hours in a day. These heavy rains caused the soil to erode from the precipice due to saturation.

“The portion that collapsed runs to about 45-meters-long which is part of the 232 meters reported and assessed accomplishment of the contractor in the project,” Engr. Ortega informed.

The report also cited that the project is still on-going and the contractor has not yet installed an end-lock on the portion of the wall that collapsed.

“Even without being able to install the concrete plug that should have served as end-lock, works on the project was stopped in March 10 2020 when the State of Public Health Emergency was declared due to the COVID 19 pandemic,” the project engineer said.

Ortega continued to tell “that works were still suspended at the time when heavy and continuous rains set in.”

Furthermore, Engr. Ortega told in his report to the District Engineer that the contractor was advised to install warning signages/devices, make appropriate action and redo the damaged portion.

“I already advised the contractor to install warning devices/signages along the highway that will alert people and vehicles about the danger that the collapsed flood control may cause,” Ortega told Calbayog Journal.

According to DPWH Project Engineer the contractor was amenable to a further advise of again working on or redoing the damaged portion of the project without any additional consideration for any amount of money from the DPWH. 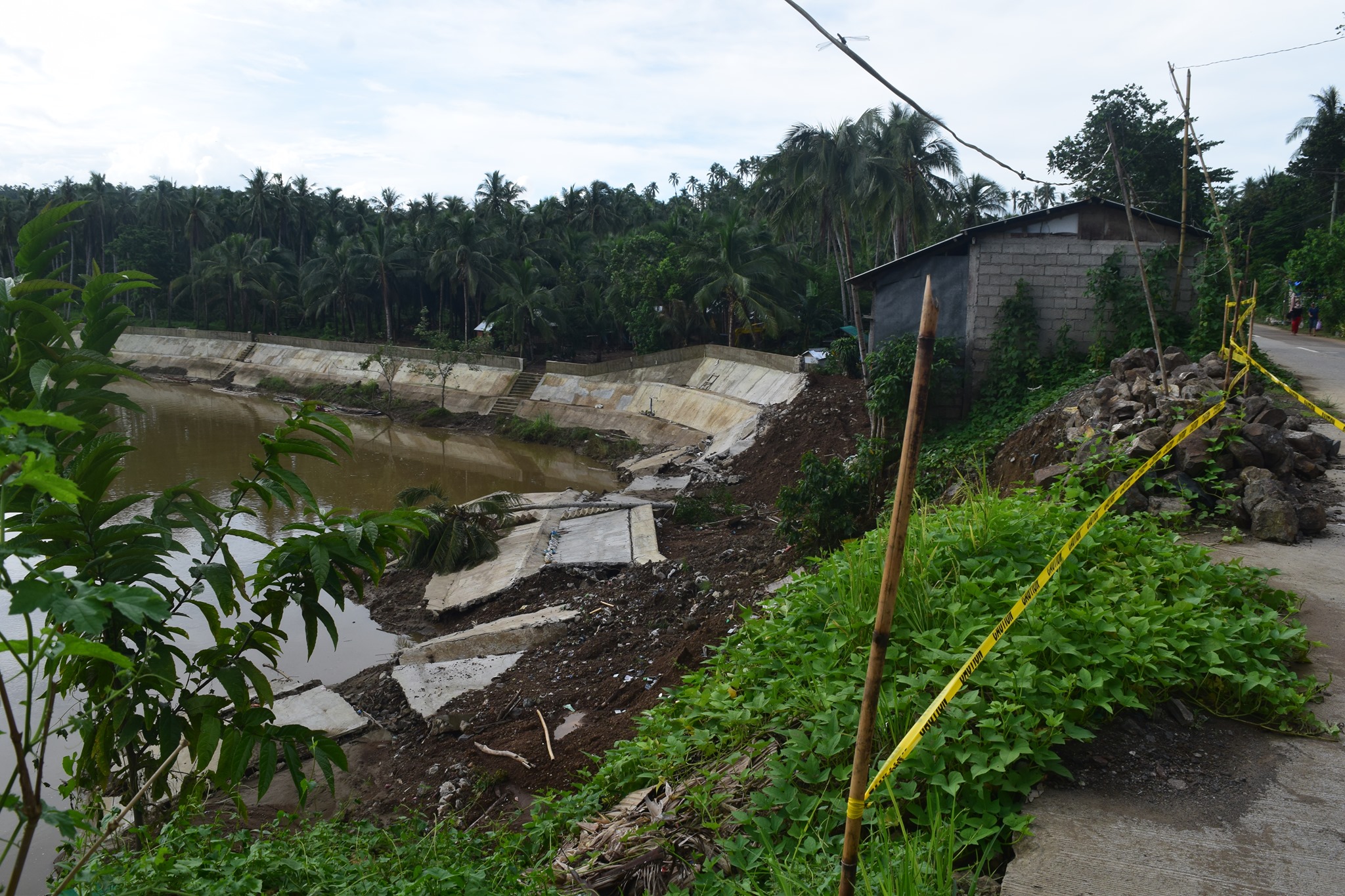 This photo is taken from the southern portion of the project along the national high way shows a more lengthy view of the project towards the northwest waters of Hibatang River.
THE PROJECT:

The Construction of Flood Control Structure Along Hibatang River (DownStream) in Barangay Nabang, Calbayog City is a project of the government thru the Department of Public Works and Highways (DPWH), Samar First District Engineering Office (SFDEO) implemented by contract in the amount of Php39,522,000.00.

It is a stretch of 270 meters of varied heights along the banks of Hibatang River. Implemented in June 2019 and targeted to be completed within 196 calendar days.

During the interview, Project Engineer Ortega told Calbayog Journal that “the project is 86% accomplished per progress status report submitted by the contractor to DPWH.”

By causes of force majeure, progress on the work is stalled. The contractor accomplished 86% of the works programmed for the project as of March 10, 2020 when restrictions brought about by the public health crisis again prohibited completion of the remaining 14% works.

“14% of the remaining works include installation of the concrete plug that helps and strengthen the hold of concrete slab unto a precipice,” Ortega informed.

According to Ortega, the whole span of 45 meters that collapsed was 12 meters high from the river bed and is the tallest span of the project. It is where steel piles of 12 meters were embedded in the river bed to serve as the wall’s foundation. 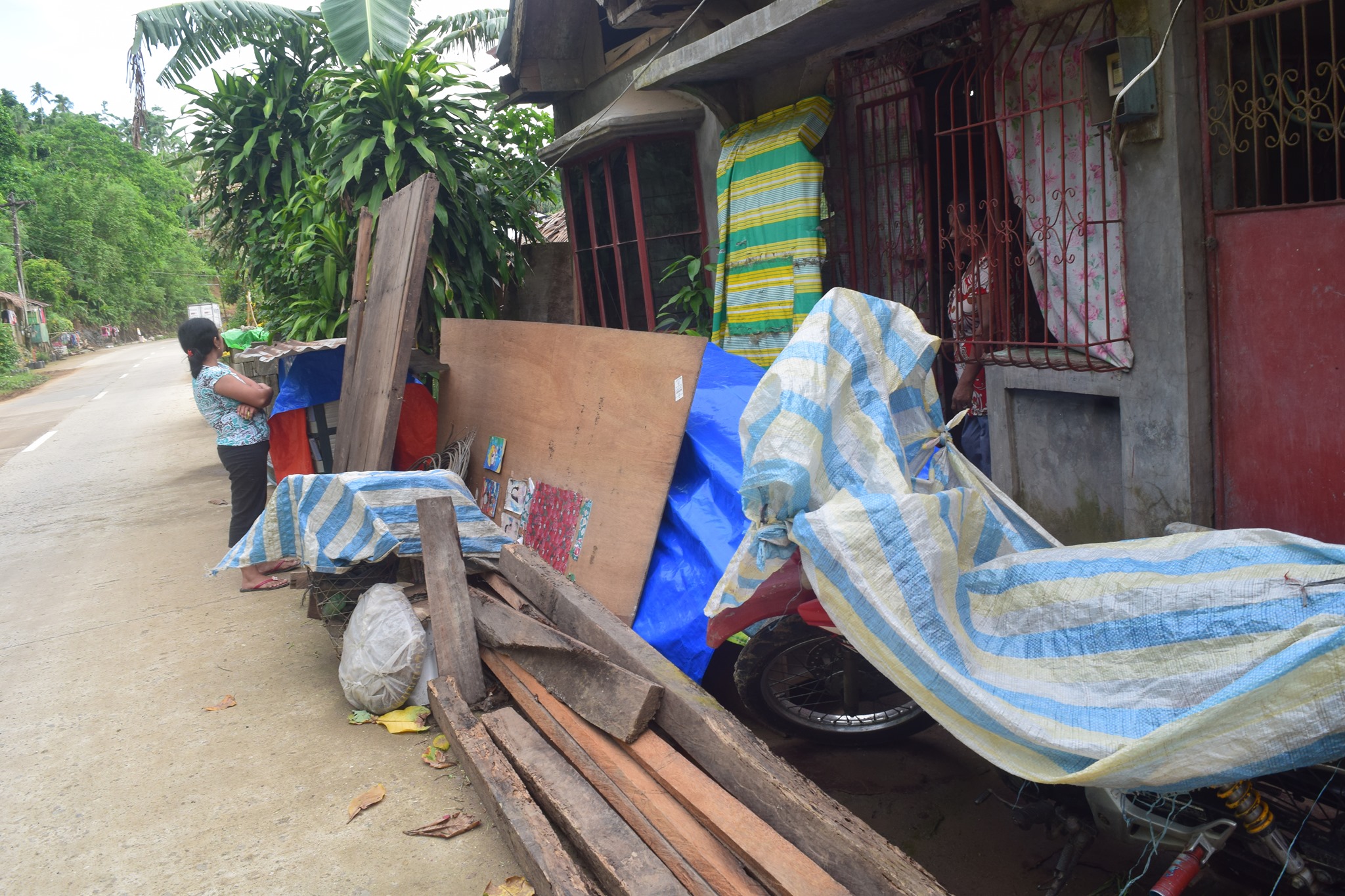 Household belongings of the two affected houses owned by Linda Nazareno and his son Bryan are seen piled outside of their houses and placed and covered at the roadside.
COMMUNITY DAMAGES & REMUNERATIONS:

The collapse of the wall dislocated members of households in 3 houses that were rendered uninhabitable. These houses are built on the brink of Maharlika Highway and were already existing when the flood control project was implemented.

“These houses encroach the road right of way when the government implemented the 10-meter-from-the-centerline road widening project for national highways,” Engr. Ortega informed.

Engr. Ortega further told that compensation for these houses are budgeted in the road widening project.

Calbayog Journal was further informed that flood control projects do not have budget for compensation of houses that encroach right-of-way in a national highway.

For humanitarian reasons, because their houses are no longer safe, the DPWH and the contractor will find means that considerations for assistance can be immediately provided to the house owners.

Two of these 3 affected houses are made of semi-concrete materials – that of Linda Nazareno and (the smaller house of) Alfredo Villanueva - while the house of Bryan Nazareno is a made of indigenous materials. 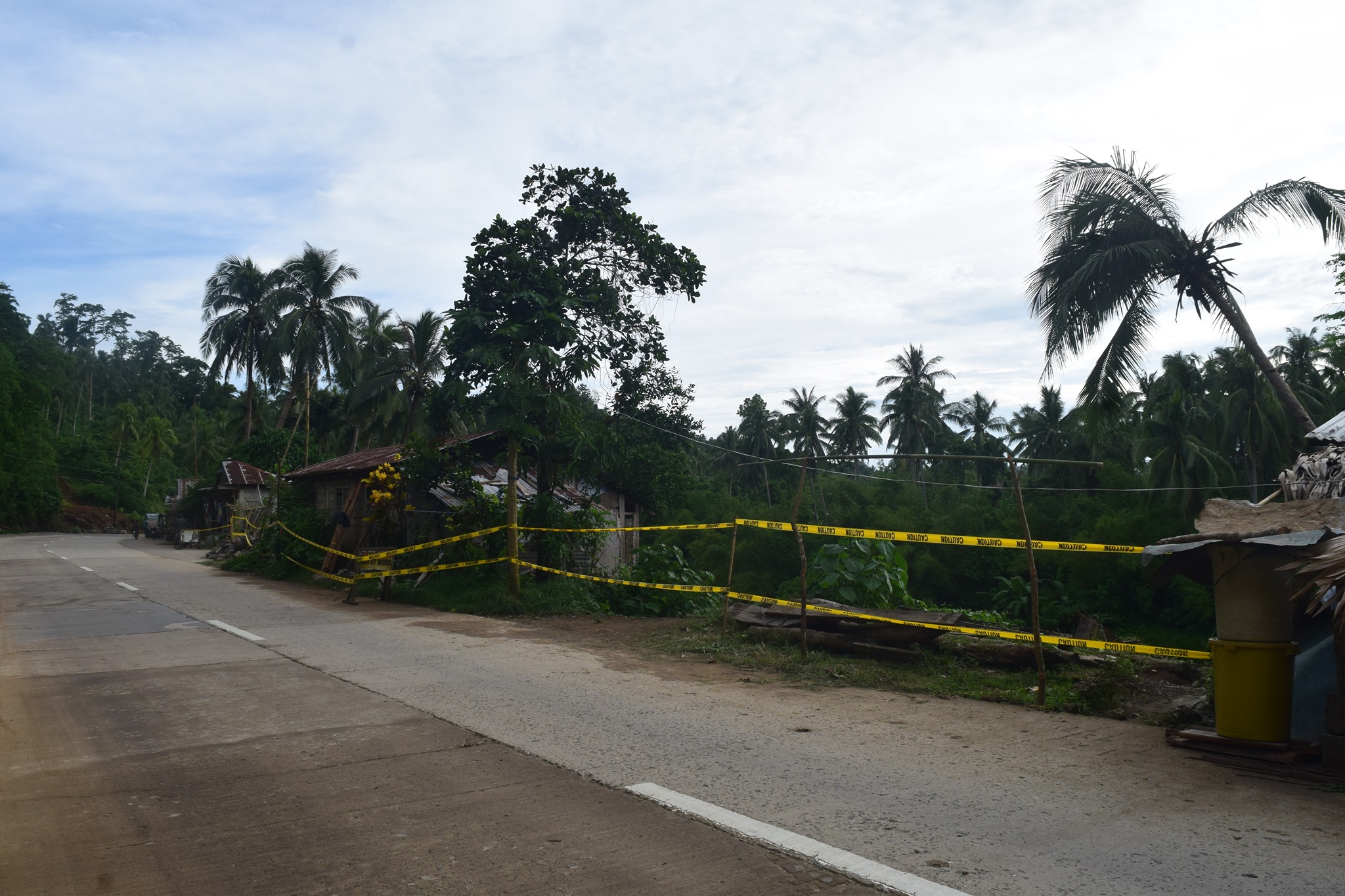 Warning sign tapes runs thru the length of the national highway where below is the damaged portion of the flood control project.
Calbayog Journal, in its site visit, was able to interview 2 (of the 3) house owners whose household belongings were seen covered with laminated canvass outside of their houses along the roadside.

Linda Nazareno told that they were advised to immediately vacate the premises and relocate themselves somewhere else to avoid the danger of soil erosion that may further happen after the collapse of the flood control wall in that particular portion of the project.

“Per advise of the engineers, we have to unload our houses that is why we have to bring our belongings outside of the house,” Linda said. 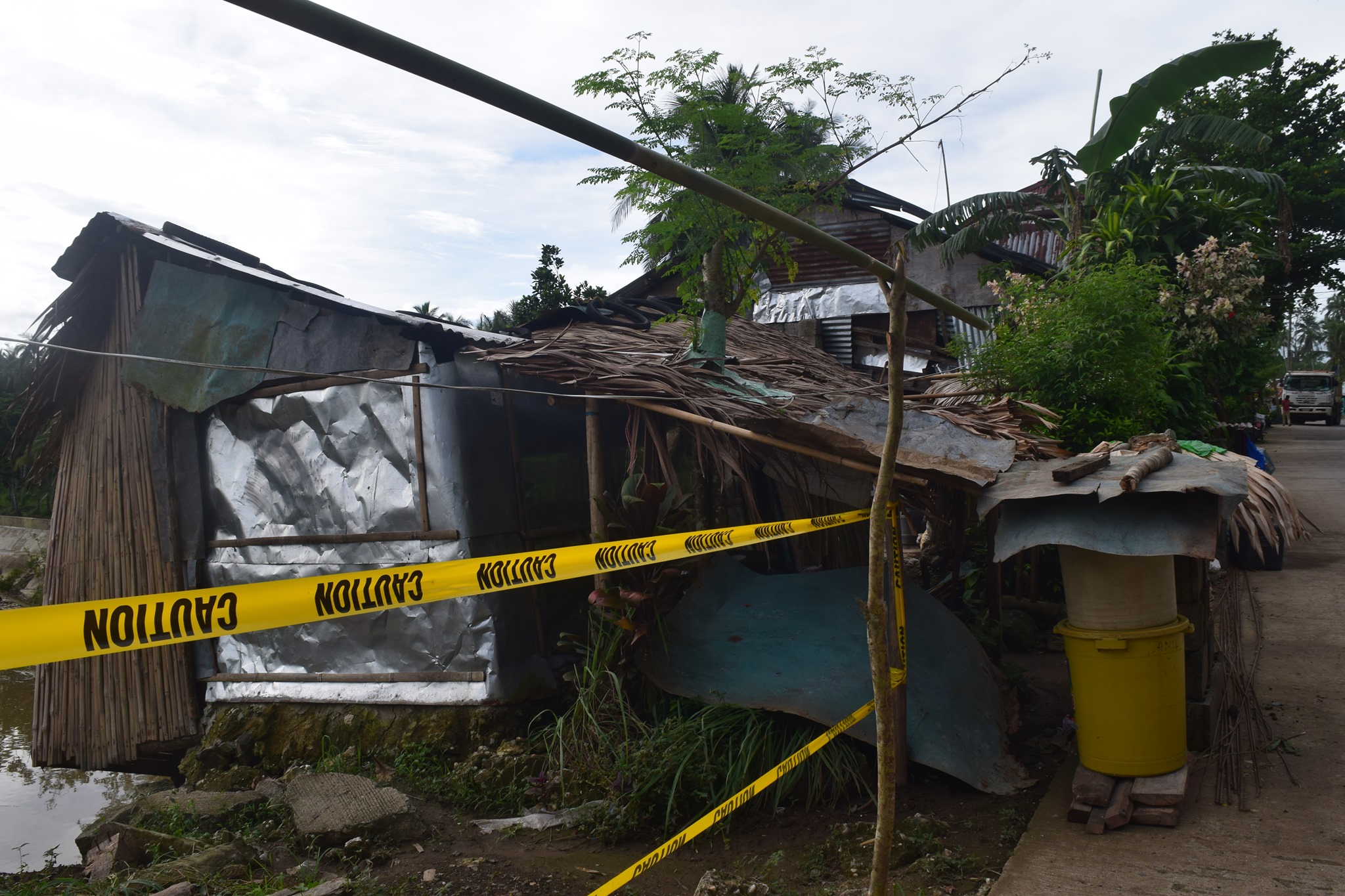 Photo shows - one of the three affected houses - the house made of light materials owned by Bryan Nazareno on the brink of the highway.
Bryan Nazareno and his wife, whose house is made of light materials found temporary shelter at their grandmother’s house. Like Bryan’s mother, their belongings are situated along the roadside also covered with laminated canvas provided by the contractor

“We are awaiting for the promised financial assistance so we can have money to rent a space for a temporary shelter while we are again starting,” Bryan’s wife said.

Alfredo Villanueva, owner one of the 3 houses, was not available for interview at that time.

RESUMPTION OF WORKS ON THE PROJECT:

With the directive from the national office of DPWH that works on government projects are already allowed, Engr. Ortega told that immediate order for the resumption of works on the project will be given to the contractor.

During Calbayog Journal’s independent visitation to the project site two days after the interview with the DPWH project engineer, workers of the contractor were already seen working on some areas of the project.(CJ/JMM)