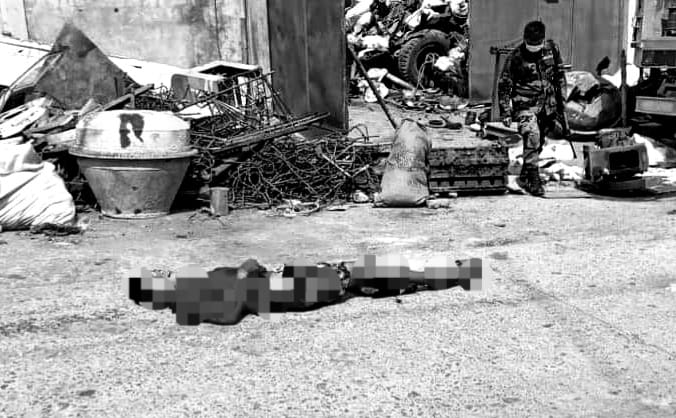 This photo is taken from the crime scene at a time when the police authorities were already in the area conducting the investigation. (Grabbed from facebook post)
CALBAYOG CITY – A truck-driver-assistant died-on-the-spot after a lone gunman aimed and fired at him several times at about 2:10 in the afternoon of June 20, 2021 in front of a junkshop in Barangay Bagacay.

The victim who is a native of the island municipality of Almagro, Samar, is identified, in the police report, as Sam Castil y Lopez, male, 22 years old and presently residing in Barangay Aguit-itan, this city.
“Upon arriving thereat, responding PNP personnel saw a lifeless body of the victim with multiple gunshot wonds on the different parts of his body,” the initial report of the PNP states.

Initial information alleged that the victim was loading scrap materials to the truck, when suddenly a lone lone rider parked his black motorcycle in front of the junkshop, alighted from his motorbike, approached the suspect with a drawn handgun of yet unknown caliber. Upon nearing the victim, the suspect fired at him several times.

Seeing the victim fall to the concrete pavement, the suspect walked back to his motorbike and fled to an unknown direction.

It was gathered that not the slightest of a provocation was seen from either the suspect or the victim. Neither an argument or altercation was heard from both.

Meanwhile, the police are still in the process of investigating as to the identity of the suspect.