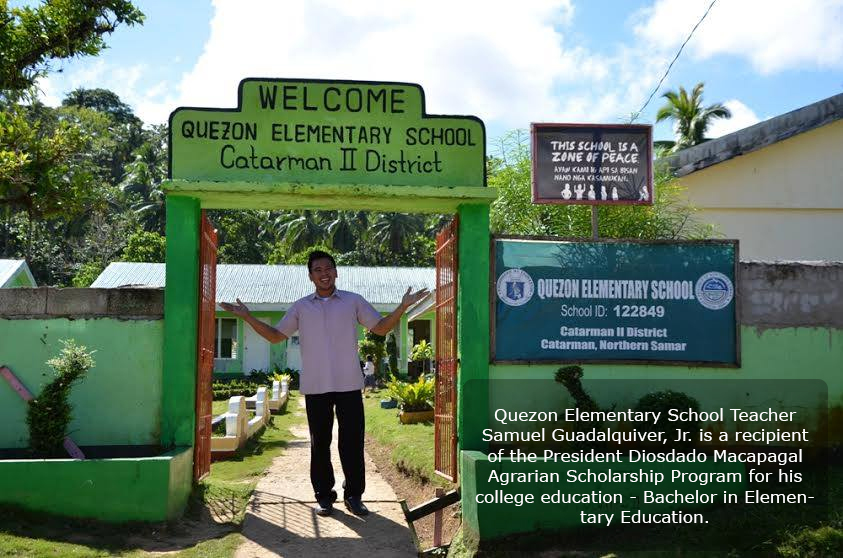 “There were times when my parents would tell me, I might not be able to continue my studies next school year because the harvest is low or the price of copra had gone down. Every time I hear this, the uncertainty of getting a college degree dreads me. Thus, I applied for a scholarship to finance my college education.”

These were the recollections of Samuel Guadalquiver when we visited him before the school year closed in Quezon Elementary School, where he is teaching for seven years now.

Samuel, or Boboy, to his family and friends was one of the recipients of President Diosdado Macapagal Agrarian Scholarship Program (PDMASP) in Northern Samar. 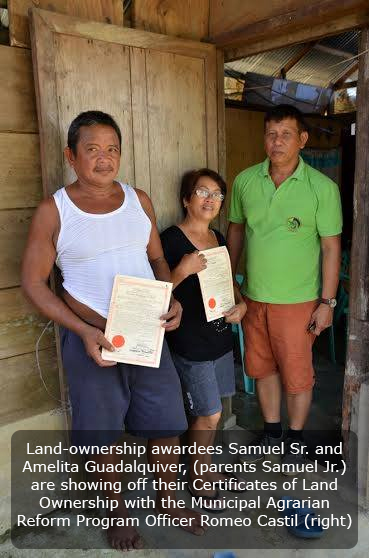 His parents, Samuel Sr. and Amelita, are both agrarian reform beneficiaries (ARBs) so that he qualified for the said scholarship program.
PDMASP is a four-year college scholarship offered by DAR to deserving dependents of ARBs under the Program Beneficiaries Development component of the Comprehensive Agrarian Reform Program (CARP).

“It was only by accident that I discovered the PDMASP,” Boboy said.

According to him, when he was in his first year in college at the University of Eastern Philippines, he applied for the Catarman Educational Scholarship Program offered by the local government unit so he could continue with his studies. But he was denied of the said opportunity. Or was it a blessing in disguise?

When he returned back to their school, Boboy read an announcement at the bulletin board about a scholarship program being offered by DAR.
He grabbed the opportunity and got the slot. Later, he learned that DAR just re-opened its search to fill-in a vacated slot. Boboy must have been destined to become a PDMASP scholar to reach his dreams. In 2008, he graduated with a degree of Bachelor in Elementary Education Major in Social Science.

The third in a brood of nine (two are now deceased), Boboy is the first to earn a college degree (the second is sister, Gloria, who was also a PDMASP scholar) in their family, and one of the handful of professionals in their village, which is situated in the mountains of Catarman, 27 kilometers away from the town proper.
He was the only one of the less than 20 pupils enrolled in grade 1 in 1994 who finished college.
“He was so determined,” his parents said proudly of him.

When I asked why his other classmates failed to continue their studies, Boboy said, it could probably be due to lack of motivation. He disclosed that their teachers rarely report to school then because of the distance. That is why his parents transferred him to the town proper when he was in grade four.
Barangay Quezon is one of Catarman’s remotest villages. There was no road at that time. People had to walk 10 kilometers to and from Barangay Polangi by just passing through a trail. Now, this barangay could already be reached by motorcycles for ?70. Very soon, when concreting of the road is completed, travel will be much easier and perhaps cheaper.

Boboy, who used to help his parents in the farm, said determination to escape from poverty pushed him to strive and find ways to reach his dream.
After graduation he took the licensure examination for teachers and passed it. 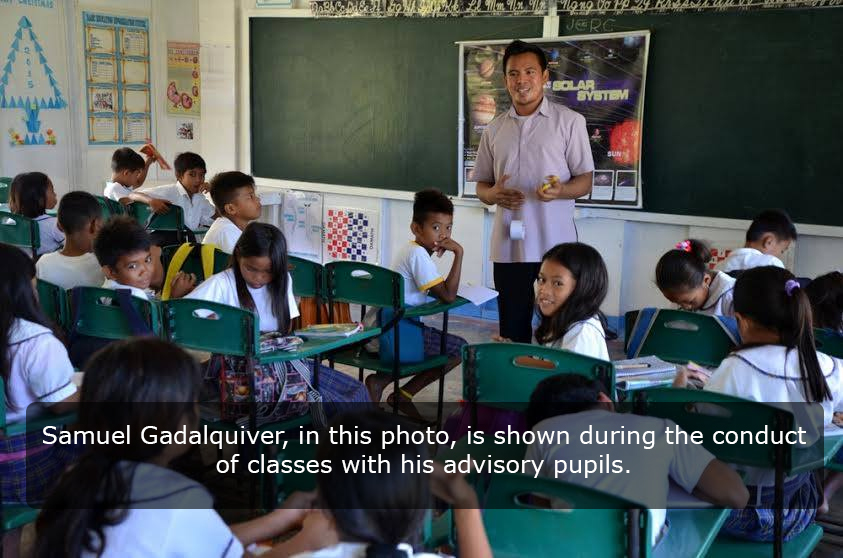 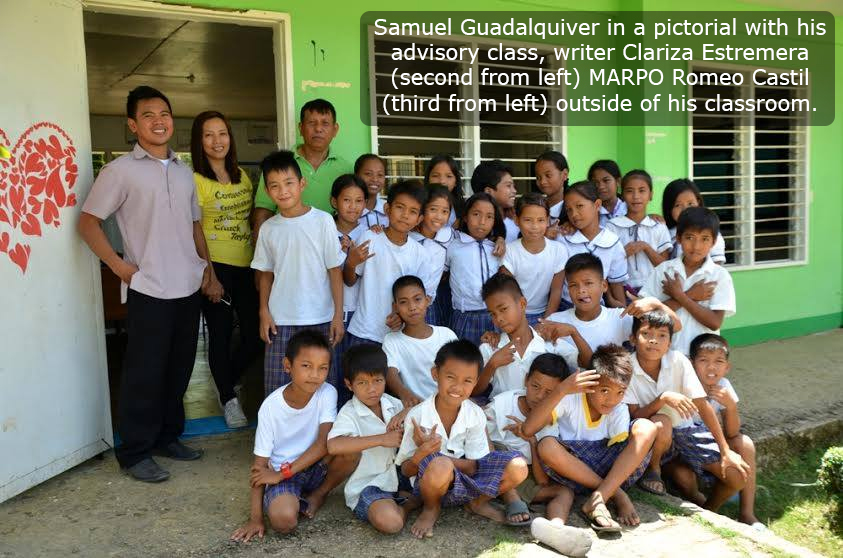 But why did he return to Barangay Quezon to teach, when there were better opportunities at the town proper or elsewhere?

Boboy humbly said he wanted to serve his fellow residents in their community. But to us, he inspires the young and motivates them to take education seriously to have a better future.

According to Boboy, had he not taken his studies seriously and without the PDMASP, surely he would have also remained a farmer until today, carrying heavy loads of copra and other farm products. 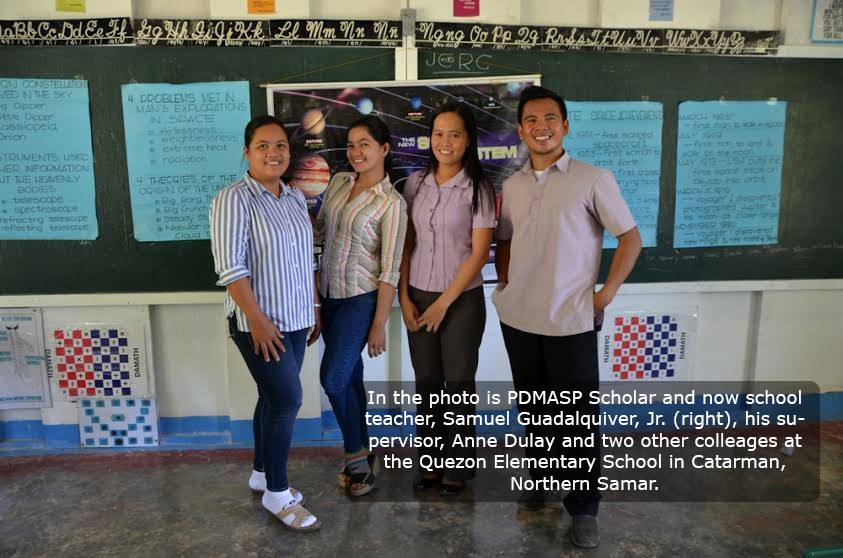 As a teacher, his supervisor Annie Dulay said, he is a good one, while his pupils described him as strict when it comes to their lessons.

He teaches his students to be industrious. The once idle surrounding in their school is now planted to pili nuts and bananas.

Presently, Boboy is planning to take up master’s degree this coming school year. 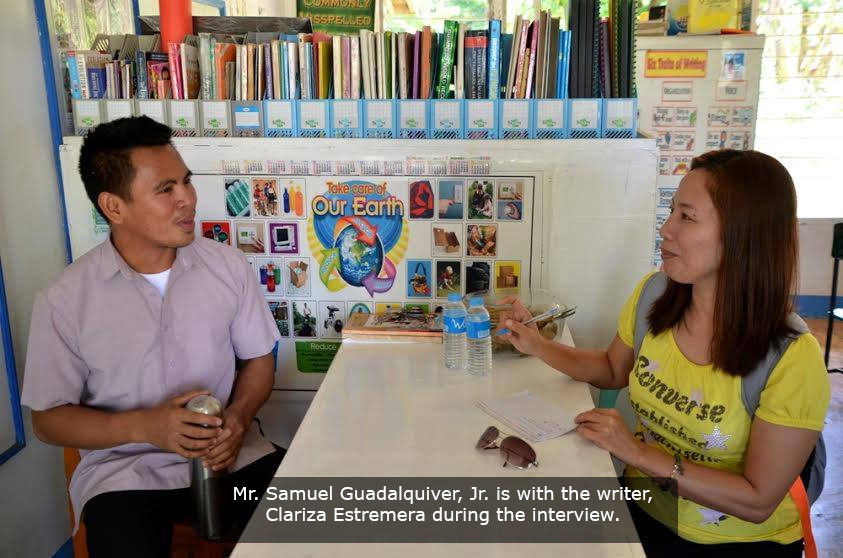 Looking at him in his uniform and listening to his story, makes this writer proud to be part of DAR which was instrumental in helping this son of ARBs free himself from the bondage of the soil and find his destiny. (Clariza C. Estremera, DAR RO 8)
,