FISHINGBOATS AT A STANDSTILL OVER MARITIME RESTRICTIONS & “DEMANDS”

No fish trading activity in the Fish Market. 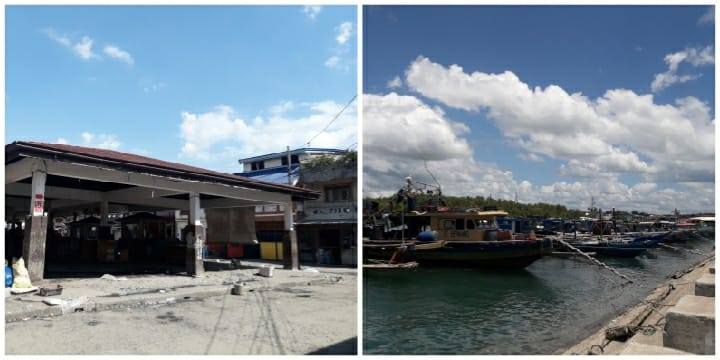 At the left side of this photo is the Calbayog City Fishport where fish from fishing boats are brought to fish traders who buy the catch in bulk. On the right side are fishing boats that lie-at-anchor in the fish landing area along Calbayog River just accros the fishport.
CALBAYOG CITY – There is a dearth in the supply of fish and other marine products in the city while fishing boats stay at a standstill in the fish landing area along Calbayog River in the vicinity of Barangay Aguit-itan. The scarcity of fish supply is foreseen to get worse as fishing boat owners choose to stop fishing activities over restrictions and alleged “demands” of the maritime police.

Thirty-seven (37) fishing boats (capable of delivering a total average daily yield of 6,000 kgs of fish and other marine products) have been lying-at-anchor since (Maundy) Thursday, April 9, 2020. These fishing boats totally stopped fishing activities when operators/owners collectively agreed to cease conduct of fishing activities after the maritime police has imposed restrictions and “demands” which aggravated the recent difficulties that the fishing industry has suffered brought about by COVID 19 pandemic.

Directly affected by the standstill are about 335 fishworkers (at an average of 15 members per fishboat crew) whose wages are based on shares from the profits that the fishboat earns from its fishing activities. This type of workers belong to the informal labor sector – the “no-work-no-pay group.”

“We are going thru tough times for sometime now since the lock downs and community quarantines have been implemented but we try our best to hold thru because this is where we get money to support our families,” said one of the fishboat operators (whose name and identity is withheld for reasons of privacy of his family but is referred to as Manny in this article).

Manny added that “aside from our own family, we have under our employ a crew whose families also depend on the income of the fishboats.”

The photo is taken during the interview with fishing boat operators/owners at the Fishport which appeared deserted without any fish trading activity at mid day of April 11, 2020.
Asked as to the restrictions and “demands” imposed by the maritime police, Nonoy (not the real name of another fishboat operator) informed Calbayog Journal that “we seem to have lost access to the fishing highway allowed of us, local fishers, for some time now because our catch from the area are intercepted and confiscated by marine police officers when we are about to dock and ready to deliver the fish to traders in the fishmarket.”

“It is either we give in to their ‘demands’ for cash and several craters of fish or we face charges of illegal fishing even without committing the act but are rather told to face charges and prove matters in court,” Manny continued to tell.

“The ‘demand’ would involve an amount of as low as Php20,000.00 to as high as Php50,000.00, depending on the volume of fish the maritime police see on our fishboats,” a fishboat crew chief, Fidel (also not his real name), told Calbayog Journal.

“We can get by with a minimal income just so we can also provide wages for people who work in the conduct of fishing activities but the ‘demands’ that the maritime police impose is so pressing that it only makes us incur losses,” Manny said.

Manny continued to tell that “we may not be making a living out of the standstill but neither are we employing the labor of our crew members only to have nothing to take home to their families.”

Calbayog Journal was told that for a fishboat to sail, the owner spends about Php75,000.00 for 1,500 liters of diesel, 40 blocks of ice and food provisions for the crew that includes 2 sacks of rice.

“The current standstill that makes losers out of all of us in the local fishing industry to include the fact that Calbayognons are deprived of the supply of fish is entirely the opposite of the ‘win-win’ approach devised by the local government since several years back until now as adopted by the Samar Sea Alliance that allows us to ply along a fishing highway on premise that we don’t engage in destructive means of fishing,” Nonoy declared.

Manny added that “the fishing community would be needing the intervention of leaders – both local and district - because we need to redefine the use of the fishing highway to be able to make a living and do our part to help in the present crisis where the community needs the assurance of a stable food supply.”

THE FISH MARKET: Fishcatch from these 37 fishing boats are brought to fish traders who buy the catch in bulk. These buyers are stationed at respective stalls in the fish market (popularly called by locals as fishport) located across the fish landing area.

There are 20 stall holders (fish traders) employing an average of 10 workers each. Without the catch from the fishing boats, there is no business for the fish traders. The situation renders about 200 fishport workers economically dislocated. Like the fishboats crew, fish port workers are also among the no-work-no-pay sector of the labor force.

One of the fish traders (who will be referred to in this article as) Fidel, relayed to Calbayog Journal, “that fish traders and their workers are greatly affected by the standstill of the fishing boats.”

“All of us in the fishing trading sector are worried about losing the market we have established in nearby localities for our buyers might engage other traders who can regularly deliver them the quantity of fish requirement, thus a permanent loss for us,” Fidel emphasized.

Not only fish traders in the fish port are apprehensive about a prolonged standstill of the fishboats, their labor force fear the most for not being able to bring food for respective families when restricted mobility will hamper initiatives to find other sources of income or means of employment.

“I have been assisting my employer in this fishport for 12 years and this is the first time that fishing boats are without fishing activities,” a fish port worker said and added that “we don’t have other means of making a living and I don’t think we can find an alternative source at the height of the quarantine.” 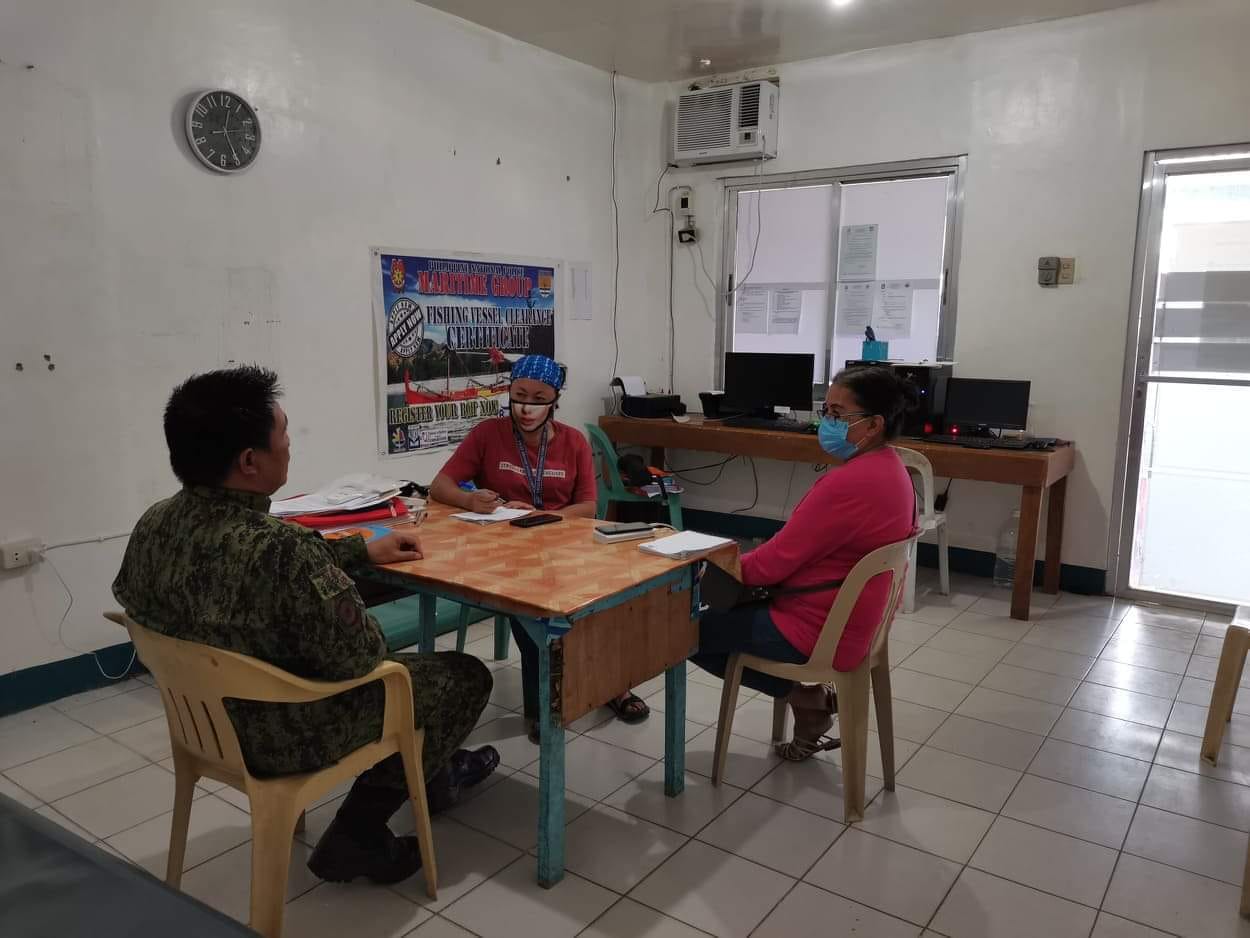 This photo was taken during the interview with P/Lt. Col. Randy Naval in the Office of the Philippine Maritime Police in Barangay Aguit-itan, Calbayog City on April 11, 2020.
THE MARITIME POLICE: The Philippine Maritime Police unit in the city is presently headed by P/Lt. Col. Randy Naval. He has been leading the operations/activities of the office since his assignment in November 2019. The unit is presently holding office at the old headquarters of the PNP beside the fish market.

Asked about accusations of alleged ‘demands’ being negotiated by his office with fishboat operators, Lt. Col. Naval informed Calbayog Journal that there is no such negotiations for money or material things made by his office.

“The air conditioning unit used in the office is acquired thru my personal credit line arranged with J Marketing on installment basis,” Naval said and further added that “the office has no television set whatsoever.”

He further told that his office is performing the functions as mandated by law and that apprehensions of illegal fishing activities are made in accordance with existing fishery laws and its amendments.

“I am guided with the prescriptions of the fishery law (his left hand lifting and showing his guidebook) in my surveillance operations using the rubber boat of the maritime police,” Naval said.

“The sea patrol operations of this office is supported by the provisions of fuel for our rubber boat from the city government of Calbayog and for which reason I personally go out at sea on board our rubber patrol boats because we have to perform and deliver accomplishments,” Naval declared.

On allegations that the maritime police never went out to the sea area where the fishermen cast their fishing nets but fish catch are intercepted and apprehended at the time when fishing boats are already about to dock in the fish landing area, Naval explained that there is nowhere in the Samar Sea that allows their kind of fishing boats to conduct fishing activities.

“Based on the existing fishery law, there is no area along Samar Sea that will allow such kind of fishing boats to cast their nets for fish catching,” Naval maintained.

“I need to hear from them, particularly about that fishing highway so I will be able to address the situation properly and be able to submit recommendations to higher offices for just considerations,” Naval concluded. 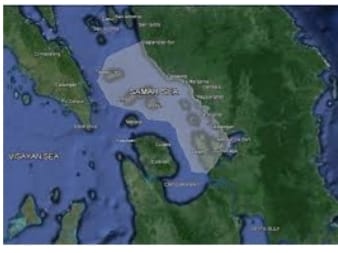 This google image shows the location of Samar Sea.
Calbayog Journal was informed by the group of fishboat owners/operators that the fishing highway is located at the northern part of the Samar Sea. It is an area allowed by the local government several administrations ago for fishing activities with the use of the Danish seine.

Fishing activities are allowed as long as boats cast their nets at a distance of 8 kilometers from the shorelines. The practice was accepted by Samar Sea Alliance on premise that the fishers do not employ the use of any destructive means of fishing – dynamite, cyanide tablets, sodium cyanide, any poisonous substance intended to stun and capture fish, etc.

The owners/operators assured that none of the 37 fishing boats (presently anchored in the fish landing area) employ the use of any destructive fishing. The fishing boats rather observe the discipline of conducting fishing activities along the fishing highway allowed in the Samar Sea. (CJ/JMM)