Story By JOSEPHINE M. MENDOZA
With Reports and photo from Ms. Eleen Lim 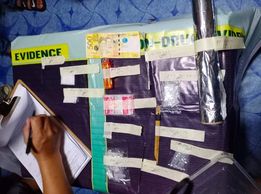 Calbayog City – A former Barangay Treasurer fell to the operatives of the Philippine Drug Enforcement Agency, Samar Provincial Office when Php500.00 worth of a substance believed to be “shabu” was sold to a poseur-buyer.

Caught red-handed for the sale of the Php500.00 worth of the substance believed to be “shabu” was Marvin Doinog y Hernando alias “Boboy” from whom a small-sized and one big-sized sachets as well as the Php500.00-buy-bust money was initially confiscated. The sale was made right at his rented house in Purok 3, Barangay Hamorawon.

During the search conducted in his room in the house he is renting, PDEA found a box containing plastic sachets which accordingly still contained residue of the substance believed to be “shabu.” Several other paraphernalia such as totter, rolls of aluminum foil, 1 box of disposable lighter, and one big sachet containing the substance believed to be shabu as well as several other items was also found in the room.

According to PDEA, concerned citizens in the barangay has caused to report the illegal activities of the suspect directly to the PDEA Director General. The buy-bust operations was conducted on Sunday, June 27, 2021.

Two months ago, Marvin’s brother, Urbano Doinog y Hernando was also arrested during a buy-bust operations. Urbano was an active `Barangay Tanod until he was caught selling the prohibited drugs in April, 2021 while Marvin was a former Barangay Treasurer.

Both Marvin and Urbano are now in the detention facilities of Calbayog City Police Station in Barangay Bagacay, Calbayog City, while Urbano is waiting prosecution procedures and charges for violation of the Dangerous Drugs Act are being prepared against Marvin.(CJ/JMM)