GREAT WALL OF LEYTE:
A protection for people or a hindrance to their goals?

Every day at 3 a.m., Christian Apostol, of Tacloban City, prepares his small boat and fishing gear for a tough voyage – a voyage to find food and money for his eight siblings. The 21-year-old breadwinner stopped studying to become a full-time fisherman just like his father, Jaime. He hopes that by fishing, he will earn money to go back to college as well as support his family. But with the Tide Embankment Project of the government, Apostol feels like the Great Wall of Leyte will also block his dreams of becoming a seafarer.

“Gusto kong bumalik ng pag-aaral kung mabibigyan ng pagkakataon. Nangingisda ako para makapag-ipon at matulungan ang aking pamilya” (I want to go back to school if given the chance. I venture into fishing so I can save money and help my family), he shared.

Christian who is the eldest child said there are days that he earns PhP100 to PhP200 but there are also days when there is nothing.

The 4-meter-tall seawall which will span around 27 kilometers along Tacloban City and the towns of Palo and Tanauan will not only displace at least 10,000 households but will also bring environmental hazards, according to Owen Megraso, program director of the Center for Environmental Concerns (CEC).

The source of the PhP7.9-billion budget was included in the General Appropriations Act by the national government. Megraso further explained that the Department of Public Works and Highways (DPWH) is expediting the project despite the opposition of the coastal residents and environment advocates.

“The project will compromise the natural ecosystem since mangroves can help prevent a storm surge similar to what happened during the onslaught of super typhoon Yolanda,” he stressed adding that "it can also disregard people’s welfare."

Storm surge is an abnormal rise of water generated by a storm, over and above the predicted astronomical tides, according to the National Hurricane Center.

Department of Science and Technology (DoST) data shows that around 7,000 people were killed by the storm surge in 2013 in Eastern Visayas. One of the reasons pinpointed by the government on why there were too many casualties was the lack of disaster preparedness. With this, the administration of former president Benigno Aquino III proposed the Tide Embankment project.

“Bakit siya minamadali? Hindi kami tumututol dito. Hindi kami anti-progress. Ayaw naming may isang trahedya na mangyari sa amin ulit,” ( Why is it being sped-up? We are not against this. We are not anti-progress. We don't want another tragedy to happen to us), Durana expressed on February 10, 2017, during the seminar-workshop organized by the Philippine Press Institute.

Durana, who shared having personally seen the storm surge, said the seawall is not enough to stop any catastrophe. He added that it will also destroy food security for the residents and lessen the income of the fisherfolks. He was also surprised on why the Department of Environment and Natural Resources-Environmental Management Bureau (DENR-EMB) Region 8 issued an Environmental Compliance Certificate (ECC) for the project when there were no in-depth discussions and scientific models made by the government. He pointed out that there were also no alternatives to the Tide Embankment project outside of the framework.

DPWH promised to give shelter to the affected households but for Apostol and Durana and many other residents of the coastal barangays, the resettlement sites will make them lose their main livelihood.

The Housing and Urban Development Coordinating Council estimated a one-percent occupancy rate and the phenomenon of relocatees returning back to government-declared “No Dwelling Zones.”

Marina Duran, 48, of Barangay 90, Tacloban City, expressed that she is not against the project as long as the government speed-up the relocation aspect.

“Waray na kami mahimo, waray na kami liwat choice nandiyan na ‘yan. Pero, nadiri kami liwat nga matikangan iton pagtrabaho hiton nga tide embankment kon waray kami klaro nga babalhinan” (We cannot anymore do something. We have no choice because the project is already there. But we would not want works on the project to start if we will not be relocated first), Duran said. 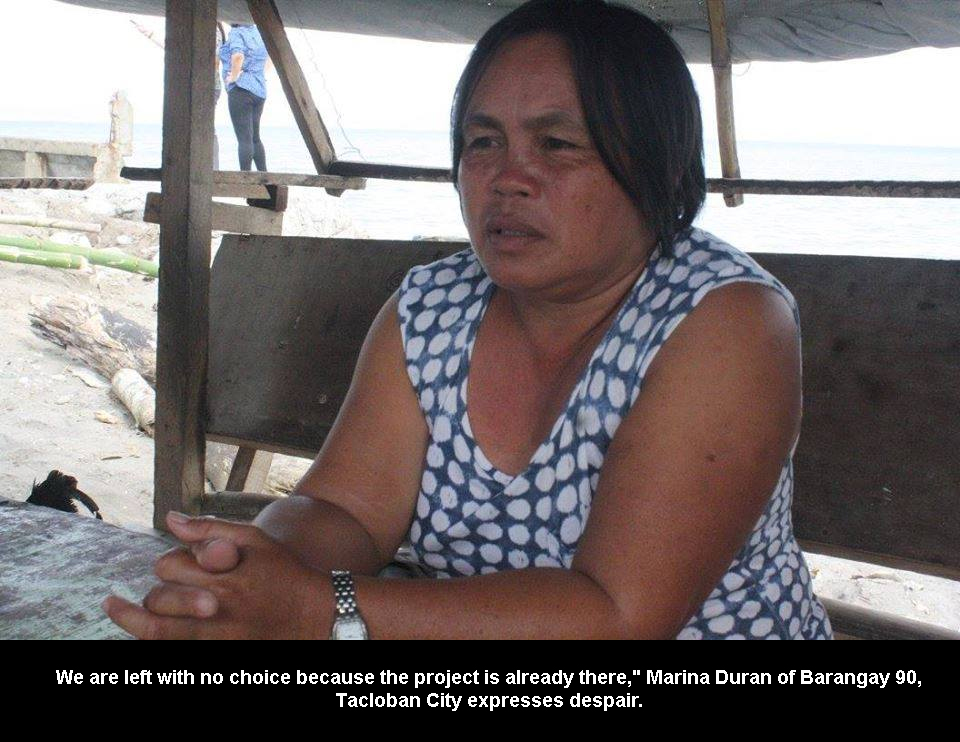 Barangay Kagawad Ronilo Duran of Barangay 90 said consultations were made by DPWH officials explaining the purpose of the project to the residents. “Noong una, medyo ayaw ng mga residente, pero ngayon pumayag na dahil naliwanagan na sila. Ang iba kasi sa kanila, malalayo na sa kanilang hanapbuhay.” (Earlier, the residents seemed to have not liked the idea but eventually agreed after being enlightened. Because some of them will be rendered distant from their source of livelihood.)

According to Duran, the affected families will be compensated by the government depending on the type of house that will be demolished. He added that because of the relocation of the families, their barangay and Barangay 89 will be merged. Majority of the 1,100 households in these barangays were relocated to Barangay Tagpuro. The whole Tide Embankment project will cover 43 barangays in Tacloban, Palo and Tanauan. It will serve as protection to 33,185 houses and buildings, according to the data by CEC.

Geoscientists Kelvin Rodolfo and Narod Eco noted that the project dangerously underestimates the storm surge of “Yolanda” in terms of heights and return periods. They also urged the government to make a holistic project that will benefit both the environment and the people.

“We stand that in mitigating the impacts of natural calamities or reducing risk of disasters to communities and the public, approaches must be done with due diligence. We challenge the Duterte administration to save taxpayers’ money, stop the defective Tide Embankment project and heed the ‘Yolanda’ survivors’ clamor for alternative approaches to address their well-being,” Eco added.

Apostol said that his hopes will not be hindered by his own hometown's "great wall" if only the government implements a holistic project that considers the well-being of the people and the protection of Mother Nature.

department of science and technology