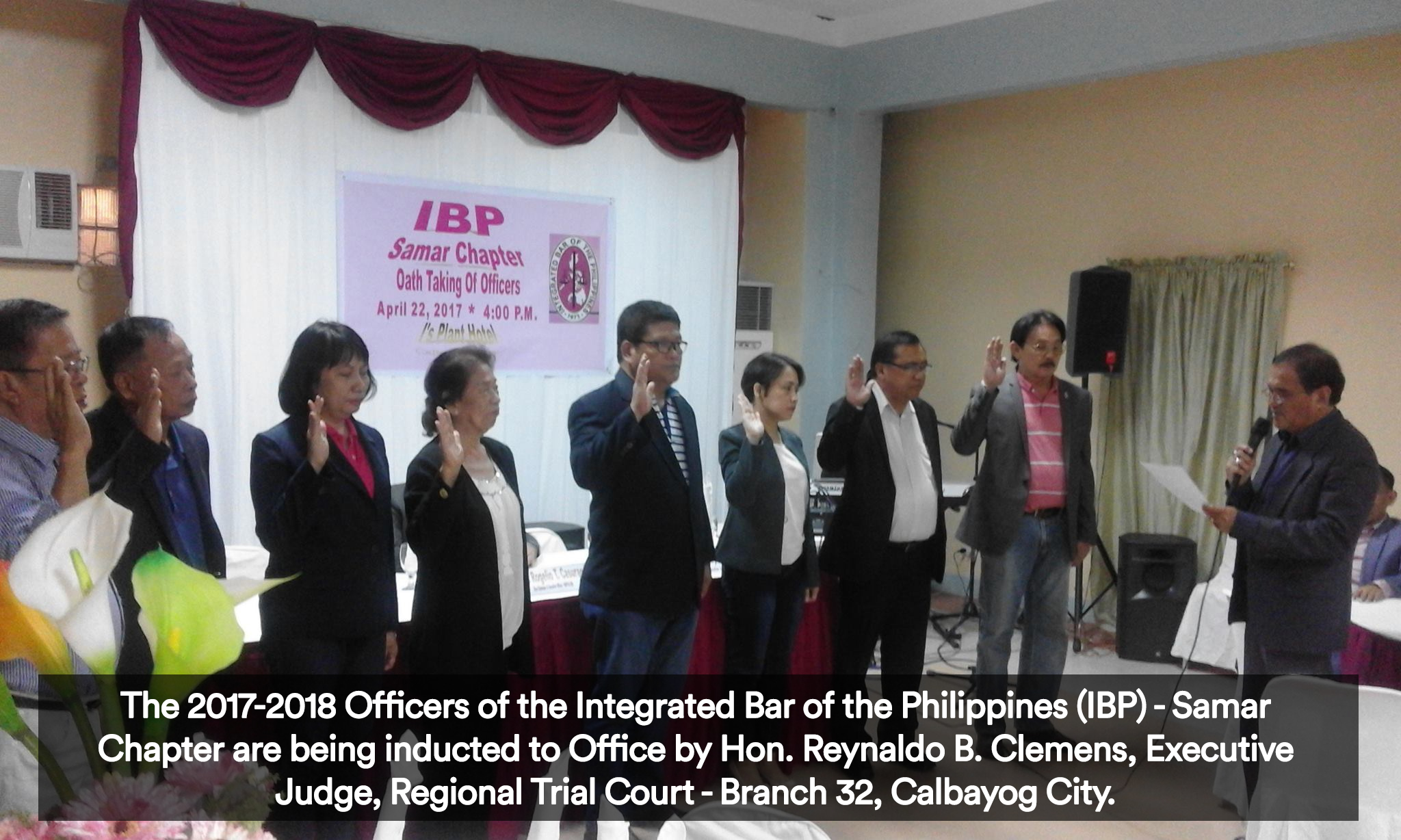 CALBAYOG CITY - Samar Chapter of the Integrated Bar of the Philippines (IBP) moves on to face new challenges as the new set of officers for 2017-2018 gets to action after having been inducted to office by Honorable Reynaldo Clemens, Executive Judge, Regional Trial Court – Branch 32 with Vice Chairman and Executive Officer (VC-EO) Rogelio Casurao of the National Police Commission (NAPOLCOM) as guest speaker. 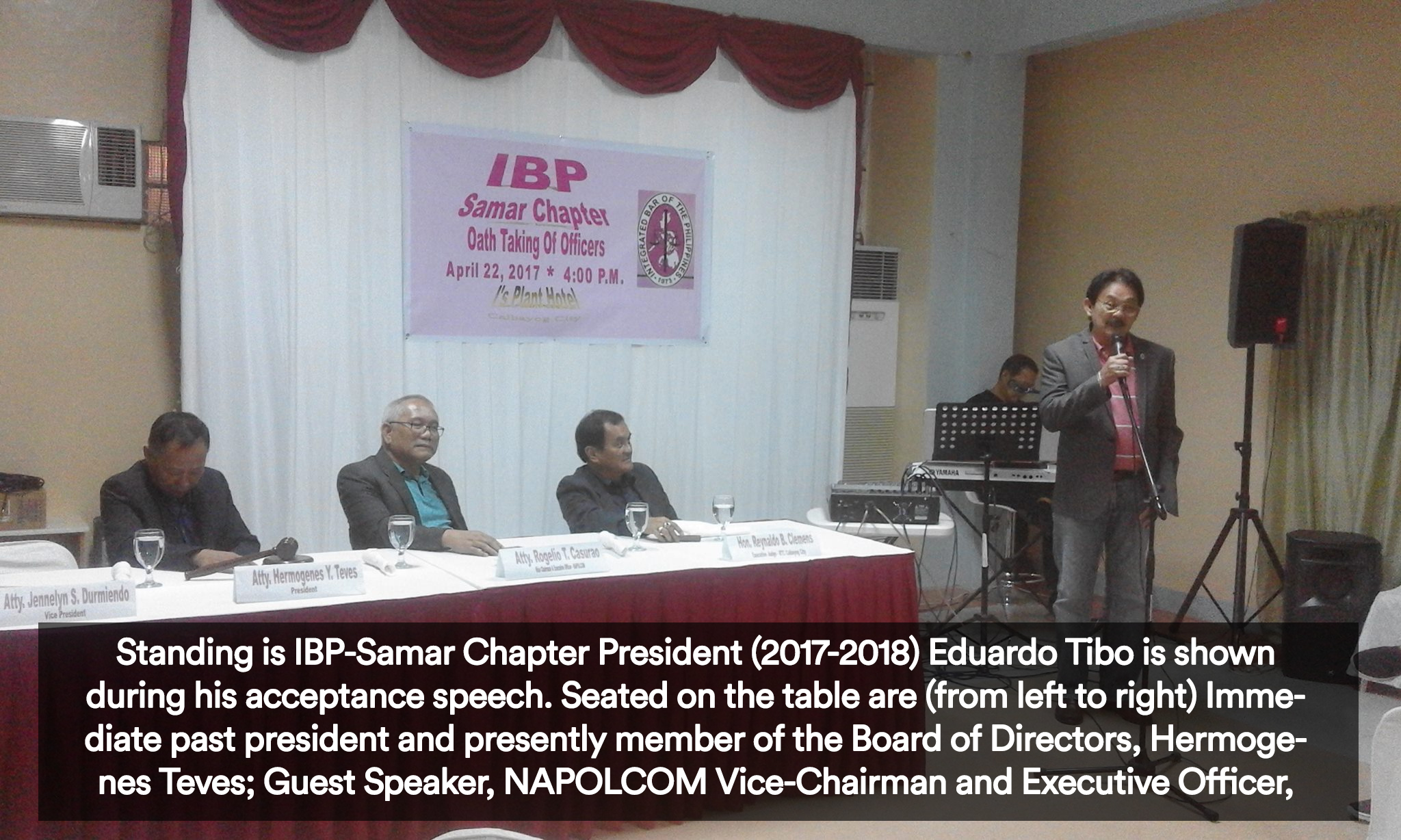 Incumbent president Eduardo Tibo, in accepting the responsibility of his position in the chapter, expressed assurance to do the most and best he could with the cooperation of chapter members to be at par with the accomplishments of his predecessor. He also asked chapter members to allocate time and effort in the free-legal assistance program of the IBP by making their presence felt in the rural areas where most of those who need legal assistance are indigents.

“A lot of our brothers and sisters in the community need legal assistance particularly those who do not have the capacity to pay for the services of lawyers. I am pleading to my co-lawyers for them to provide time for free legal services,” Tibo said.

With the current upheaval brought about by EJKs seemingly incidental to the government’s war on drugs, the incumbent chapter president also called on his fellow lawyers to lend a hand in facing the challenge of encouraging the community to surface if only to concretize the accusations that EJKs are committed so that justice can be rendered to victims. 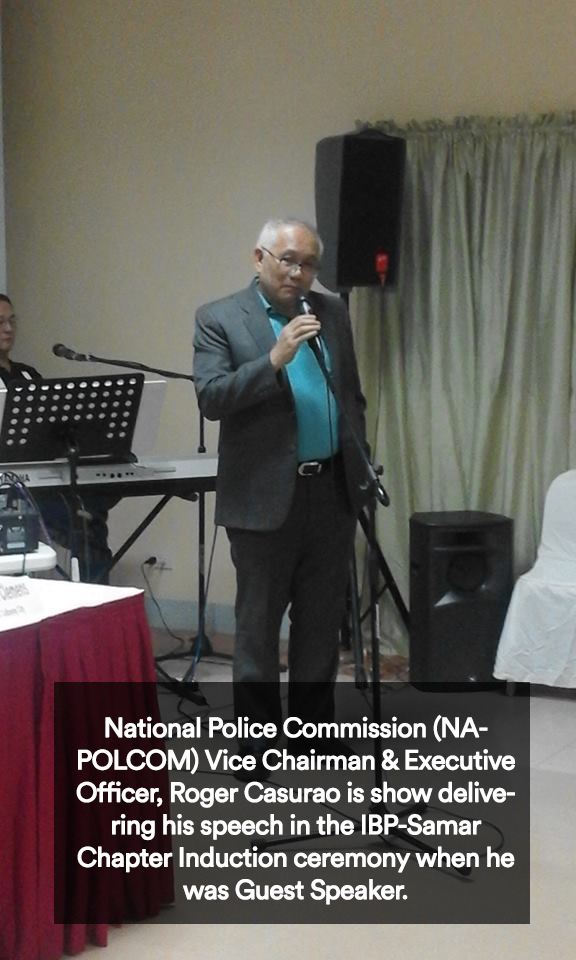 The challenge to the lawyers on EJKs was accentuated in the speech of Atty. Casurao who was guest speaker during the induction ceremony. NAPOLCOM VC-EO encouraged his fellow layers to visit and look into the issue of extra-judicial killings (EJKs) which accordingly is an issue that requires a lot of legal intervention.

“EJK is almost the cry of the nation. People are rebelling and the church is talking against it. This is a big issue that is, in fact, threatening the integrity of the present administration – a big black eye being propagated. Yet, nothing is done to concretize the accusations.” Casurao stressed in his speech.

Further, NAPOLCOM VC-EO emphasized that “the people being suspected of doing these EJKs are people in the government service – the policemen! But in so far as the NAPOLCOM is concerned, the office has yet to see a case filed against policemen committing EJK. It is a big word and yet NAPOLCOM is almost empty of EJK cases.”

In the absence of cases brought against the policemen, Casurao opined that “I would not say that the lack of cases filed is a good indication that the police is doing their job well or it would absolve the police and the institution from committing EJK for reasons that it could be because the people are just afraid to be suspected of being also drug personalities by coming to the aid of people who have been eliminated due to drug involvement, or maybe the community cannot just find someone to trust about information, or the most common reason that is the lack of financial resources that entails pursuing a case in court,” thereby emphasizing that “the lack of cases will not indicate that there is a perfect execution of law enforcement.” 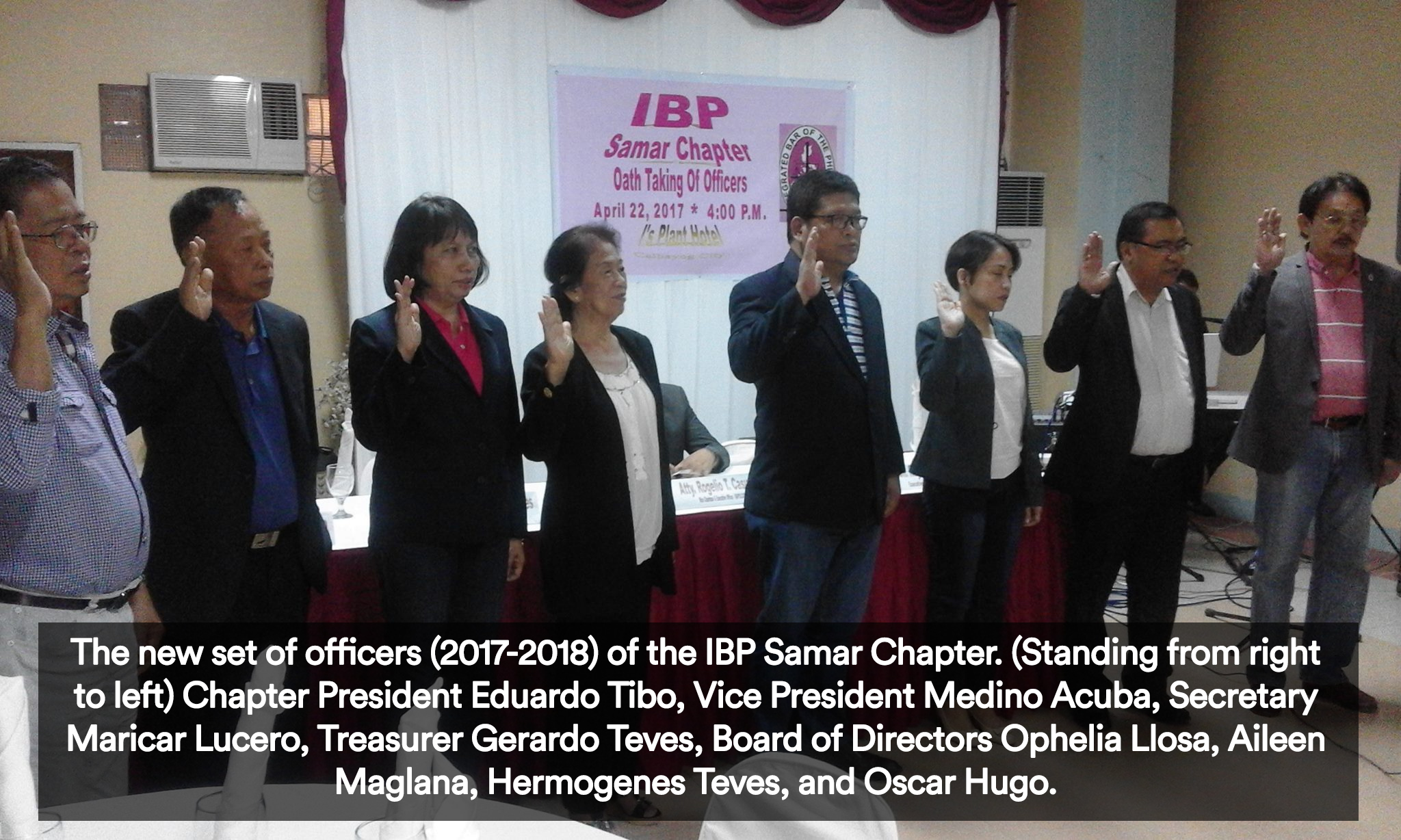 Confident that the lawyers are equipped with the ability of crafting a strategy to put into motion a case against a suspect and banking on the popular notion on the degree of acceptance and trust that the people have on them guarded by the assurance of full protection of the legal system, Casurao expressed optimism that “a lot of difference in bringing light to the issue on EJK will be achieved with even only one-fifth of more than the 35,000 lawyers in the country who will come out and motivate people to bring justice to the victims of the so-called EJK.”
Meanwhile, for his part of having faced the functions of the IBP that has become regular during his term as Chapter President (2016-2017), such as assisting people in need of free legal services, encouraging lawyers to assist people in need, and conducting legal aid trainings for police and jail officers if only to keep the IBP alive for the people of Samar, Hermogenes Teves, in his valedictory speech told that being chapter president connotes public service.

“One of the realizations I have in my experience in the rural areas of some municipalities is the fact that there are people who went to jail having been sentenced of crimes or cases they did not commit for reasons of lack of legal assistance,” Teves said.

Guarded with the principles of establishing a lawyer-client relationship premised on the point that people in need of legal services should go to lawyers, Teves encouraged fellow lawyers to make their presence felt by the under-privileged in the countryside. “We must assist the poor thru free legal aid program of the IBP,” he emphasized. 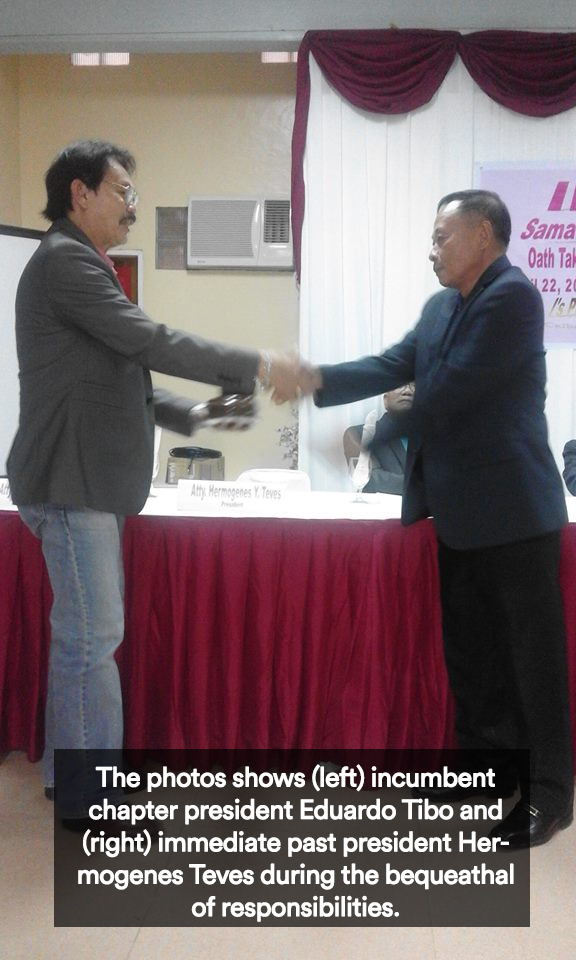 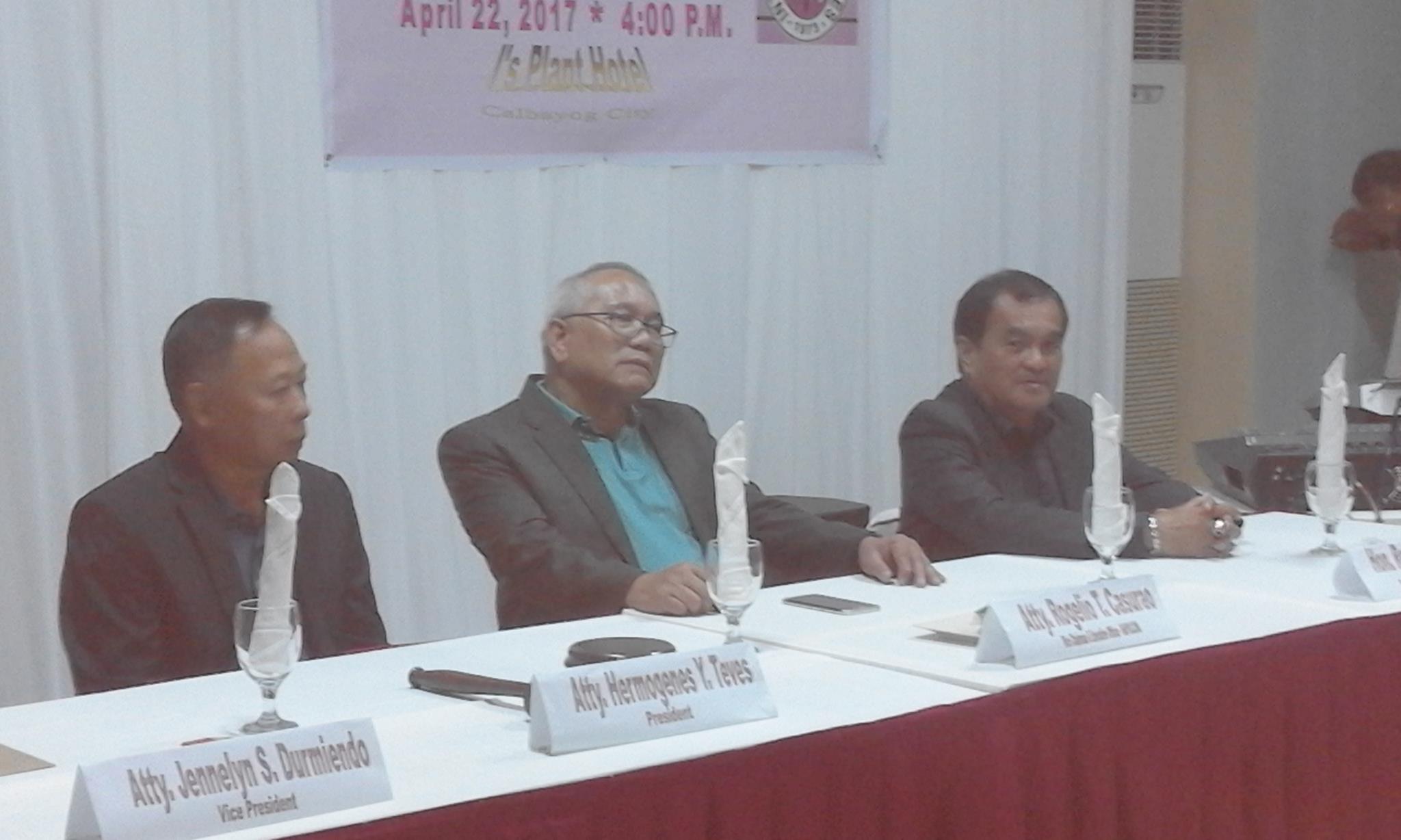 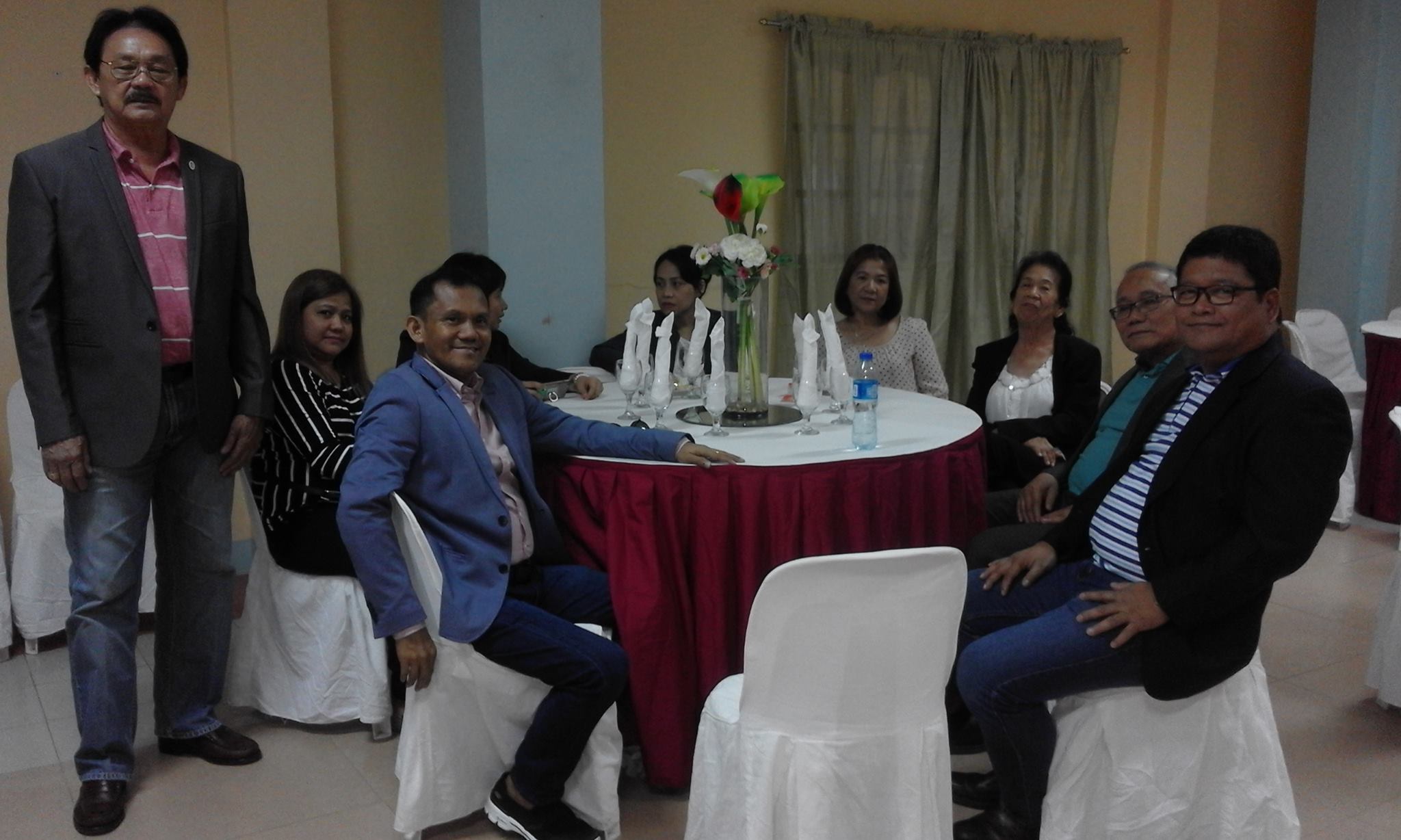 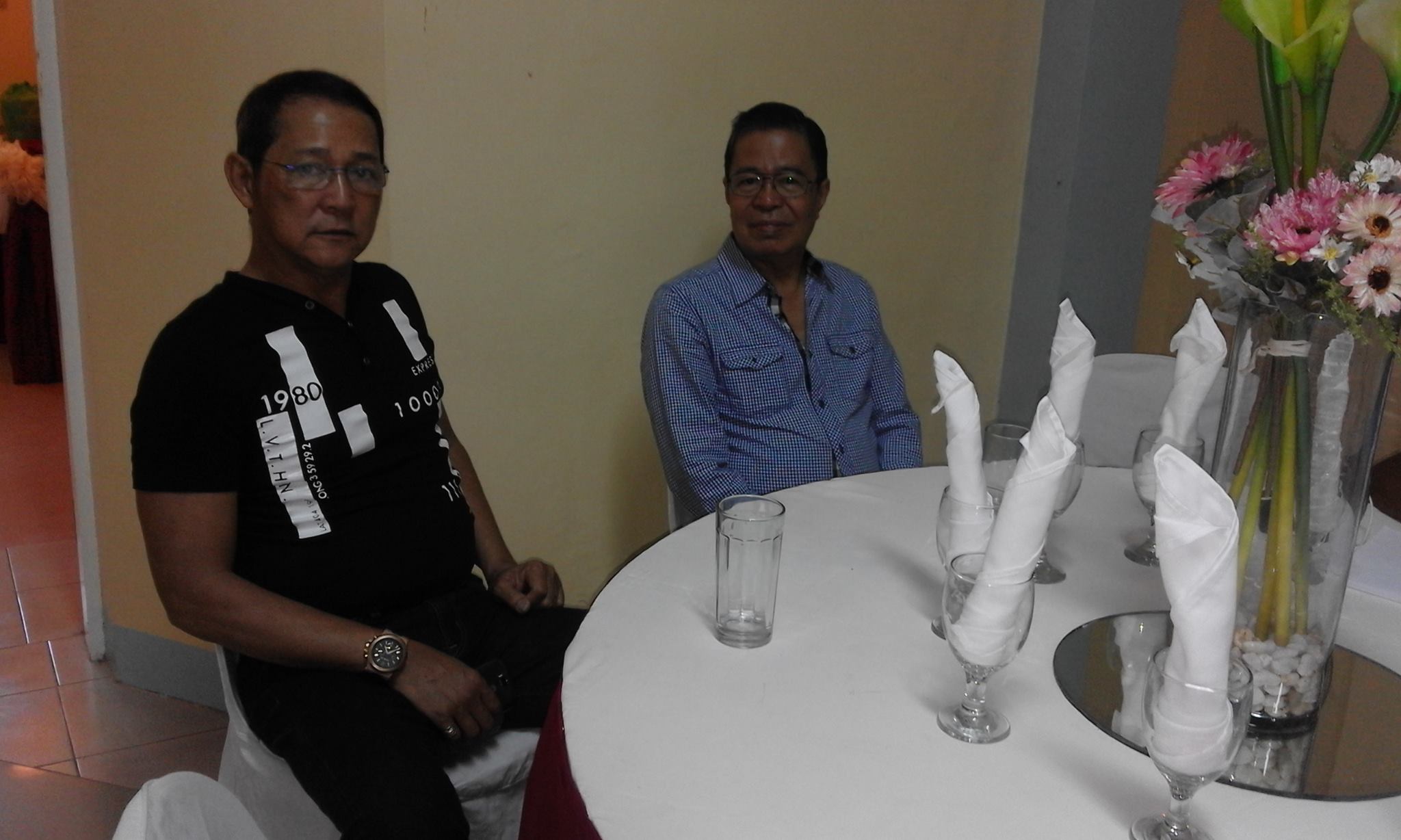 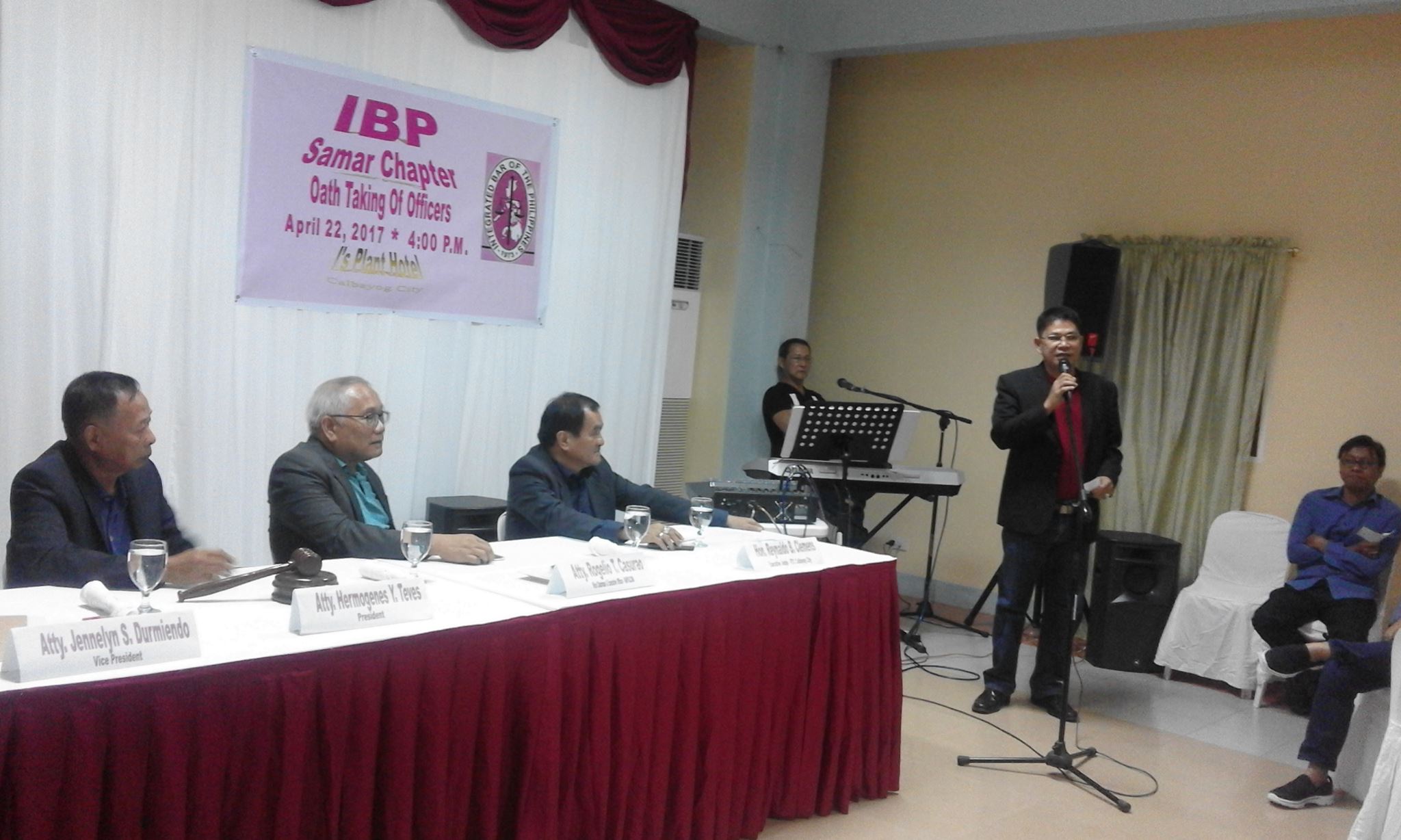 integrated bar of the philippines