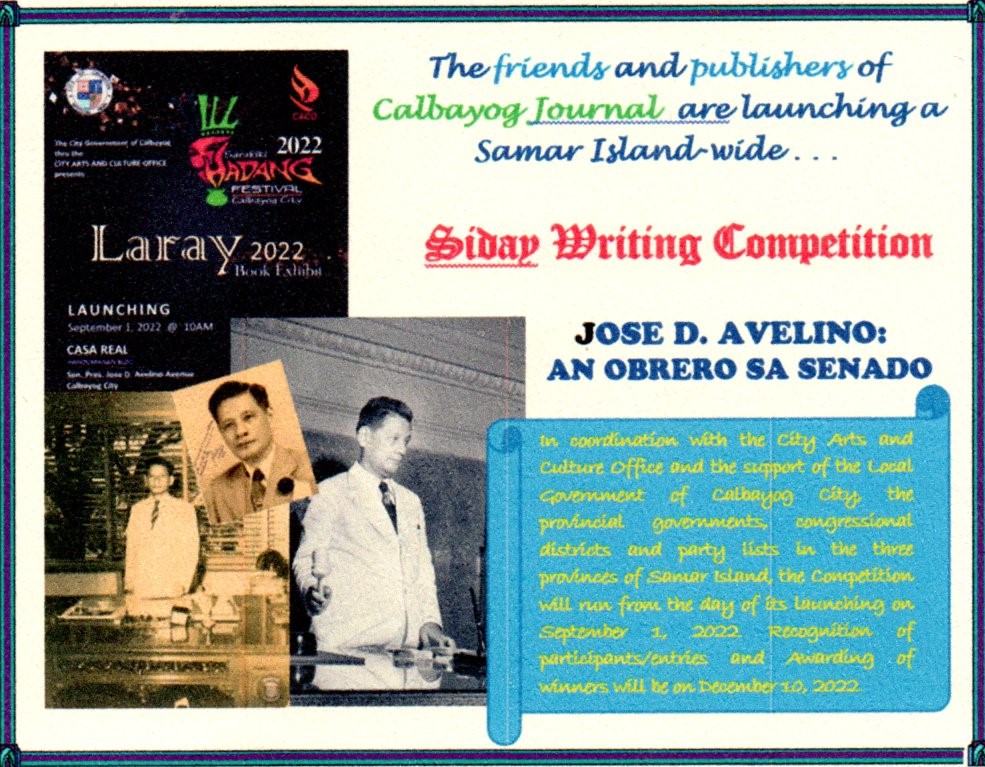 A siday writing competition was launched by Calbayog Journal in September 01, 2022. The launch was made together with the activities under the Sarakiki-Hadang Festival of the local government of Calbayog City thru the City Arts and Culture Office (CACO) – the festival being celebrated September 1-8, 2022.

Following under one title: JOSE AVELINO: AN OBRERO SA SENADO, the siday writing competition is a project of Calbayog Journal with its publishers and friends. It is a Samar island-wide competition with participants qualified as Samarnons falling within the age bracket of not younger than 15 years old. Regardless of present residency, a Samarnon is defined in this contest as anyone or anybody born or raised in any of the three provinces of Samar Island. In its guidelines, “raised” means a migrant to any of the three provinces and stayed for at least 10 years and fluent in any of the various dialects as specified in this contest. (Please see the Guidelines & Mechanics of the Contest in jpg form herein posted. A downloadable pdf form of the guidelines and mechanics of the contest is also posted)

There are two (2) modes in this competition with Siday Writing as the major contest and Siday Performance as the supplemental contest.

The participating writers will win a grand prize of as much as Php50,000.00 with consolation prizes as low as Php5,000.00 to be won by finalists who will not be named in the top 3 best.

The contest will be supported by the local (provincial, city, municipal) governments and the Representatives of Congressional Districts as well as the business community in the island of Samar.

An official entry form is required to be used by the participants/writers in the submission of respective entries. It includes a Declaration of Agreement, thus needing the signature of a Notary Public. (A jpg form of the official entry is also hereunder posted, with a downloadable pdf form also included)
With a deadline for submission set on October 15. 2022, entries should be sent via email at jdavelino.sidaywritingcontest@gmail.com. The competition secretariat will send an acknowledgment upon receipt of the participant-writer’s entry.

A showdown of performances on the 6 best entries per category will be made on December 10, 2022 in Calbayog City when awarding of winners in the writing competition will be announced/proclaimed and awarded. Cash prizes will also be given to top 3 best performers from each of the two categories in the showdown.(CJ/jmm-September 8, 2022)