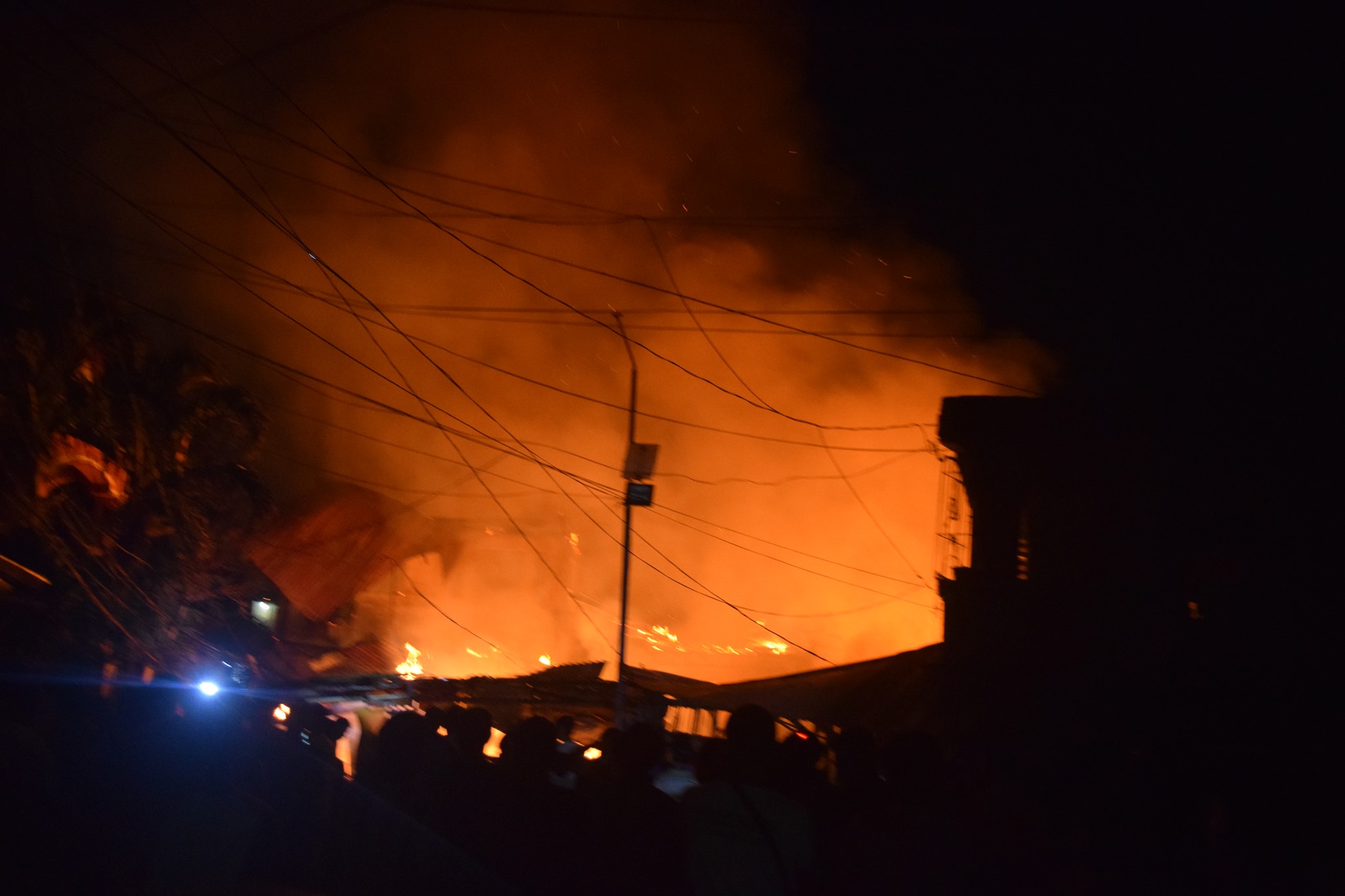 The photo shows the fire scene in Purok 1, Barangay Obrero, Calbayog City near midnight of February 12, 2020.
CALBAYOG CITY – With no reported injuries or fatalities, an estimated Php270,000 worth of properties were lost to a fire that broke near midnight of February 12, 2019 in Purok 1 (Pandayan area) of Barangay Obrero particularly in an area near the boundary of Barangay Carmen.

The fire is estimated to have started at around 11:12 PM and lasted until it was declared “fire-out” at 11:46 PM with firefighters managing to drag water hoses to reach the fire scene due to pathways that are too narrow for fire trucks to enter, leaving them stationed at the (old) national highway which is about more or less fifty meters away.

The blaze, classified by the Bureau of Fire Protection (BFP) as Structural Fire totally razed seven (7) houses. Three (3) of these were three-storey houses, three (3) one-storey house and one small open-air store. One two-storey house belonging to Eric Jalalon was partially burned. 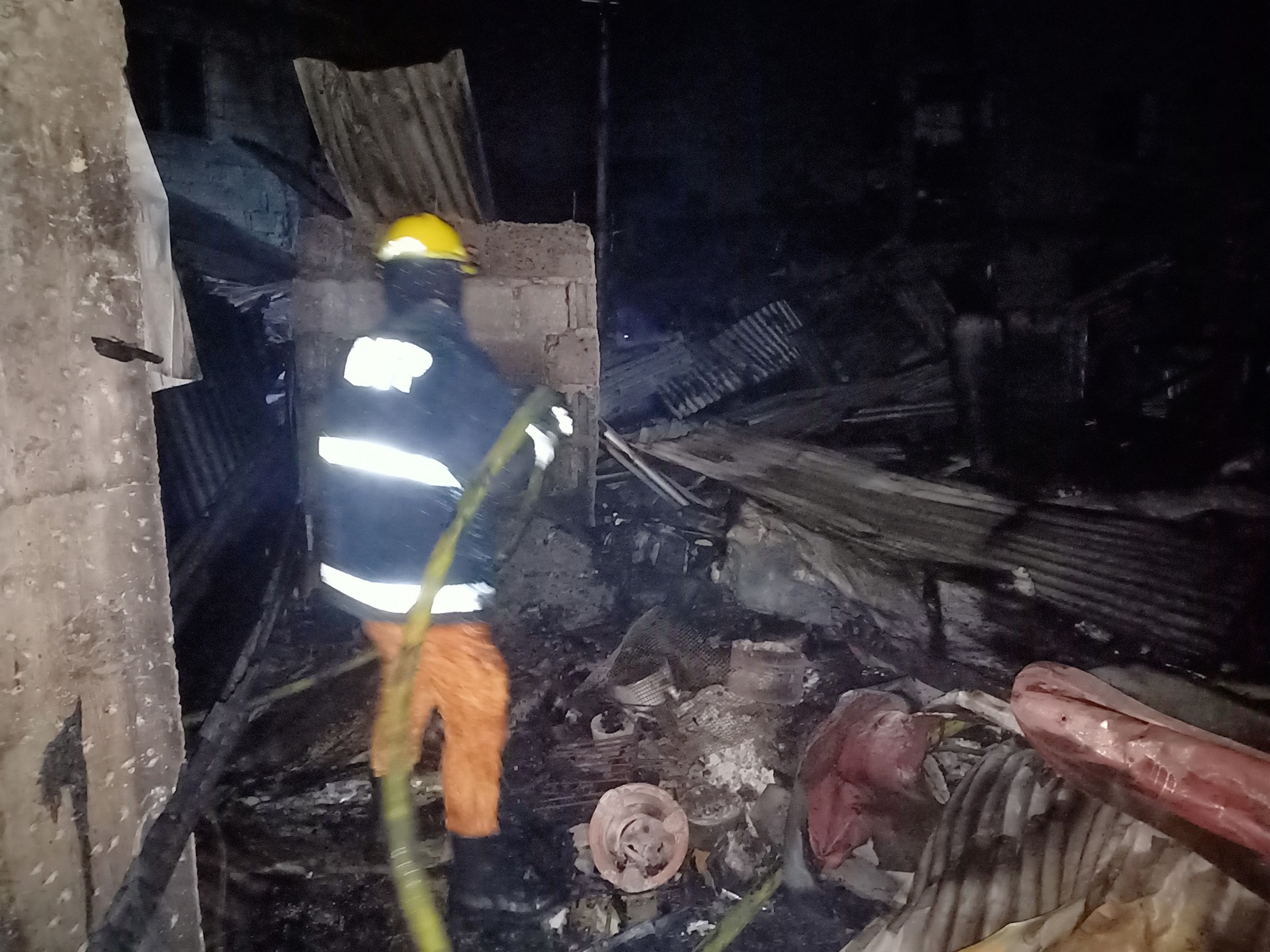 The fireman checks on the last signs of fire minutes after the it was declared "fire-out."
Six (6) owners of totally burnt houses were identified as Rafael Tallo, Edelberto Hachero, Mercedes Oriendo, Josephine Villavicencio, Evangeline Garalza and Sheryl Jade Villegas Mediana; while the owner of the small open-air store remains unidentified as of the release of this story.

Acting City Fire Marshal, Insp. Eusebio Carlos G. Elona, told Calbayog Journal that his office is still validating reports from residents of neighboring houses in the fire scene that the fire started with a lit candle mounted over a plastic box which has been left burning and unattended.

“Our fire investigators are still validating initial information relayed by residents in the area about a child having left a burning and unattended lighted candle on top of a plastic box,” Fire Marshal Elona informed. 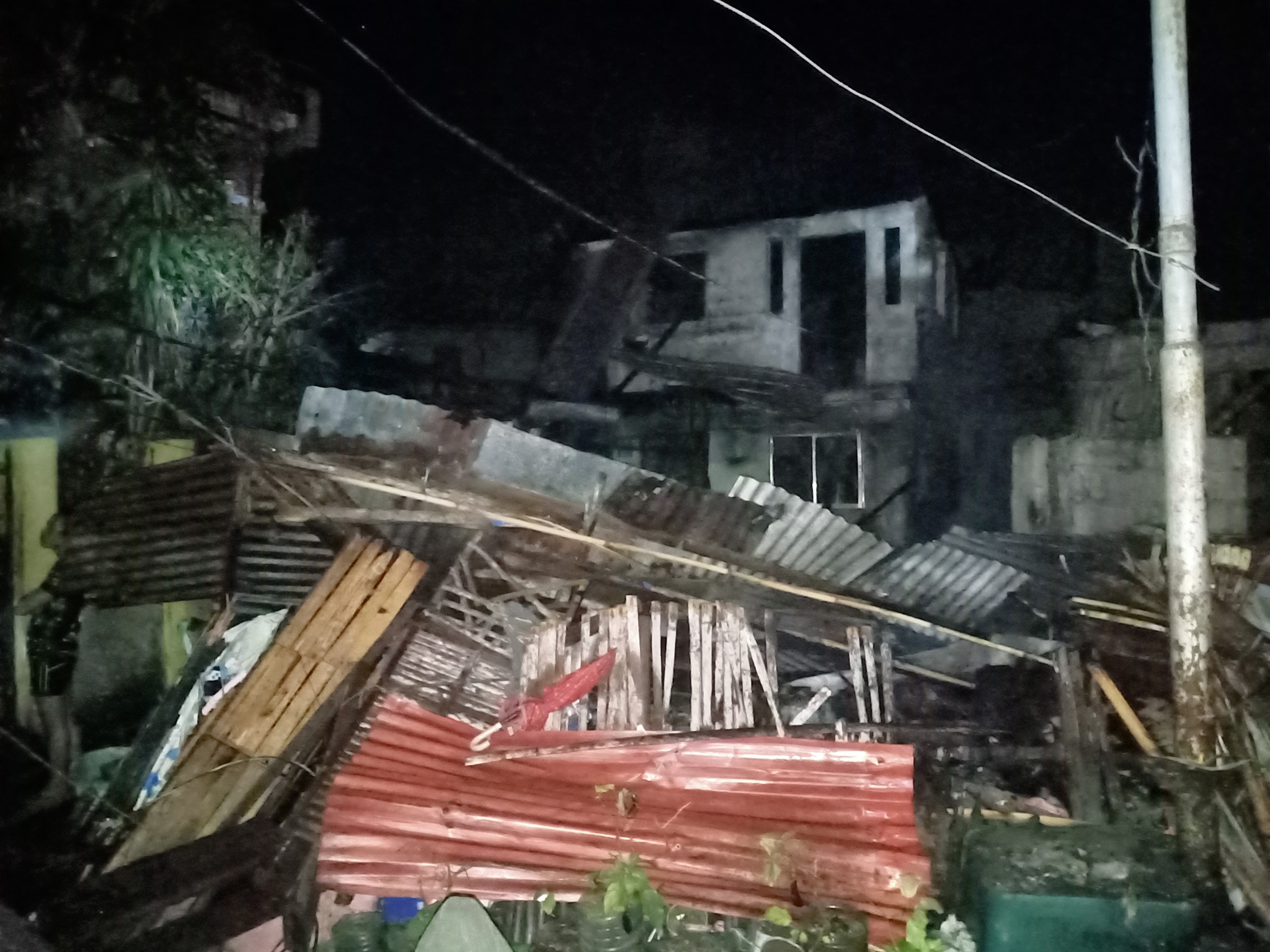 The rubble of the 7 house totally razed by the 34-minute blaze.
BFP-Calbayog Fire Investigators are also being fielded to gather evidences or samples that might be required for examination at the BFP fire laboratory.

Fire Marshal Elona added that “aside from validating and/or all information fed to us, we also gather evidences that may be required to be submitted to the BFPs laboratory in Quezon City for examination as to the actual cause of fire.”

Meanwhile, some of the fire victims who were rendered homeless has sought temporary shelter from relatives. Other house owners who lost their homes to the fire were seen already clearing their respective areas the day after. (CJ/JMM) 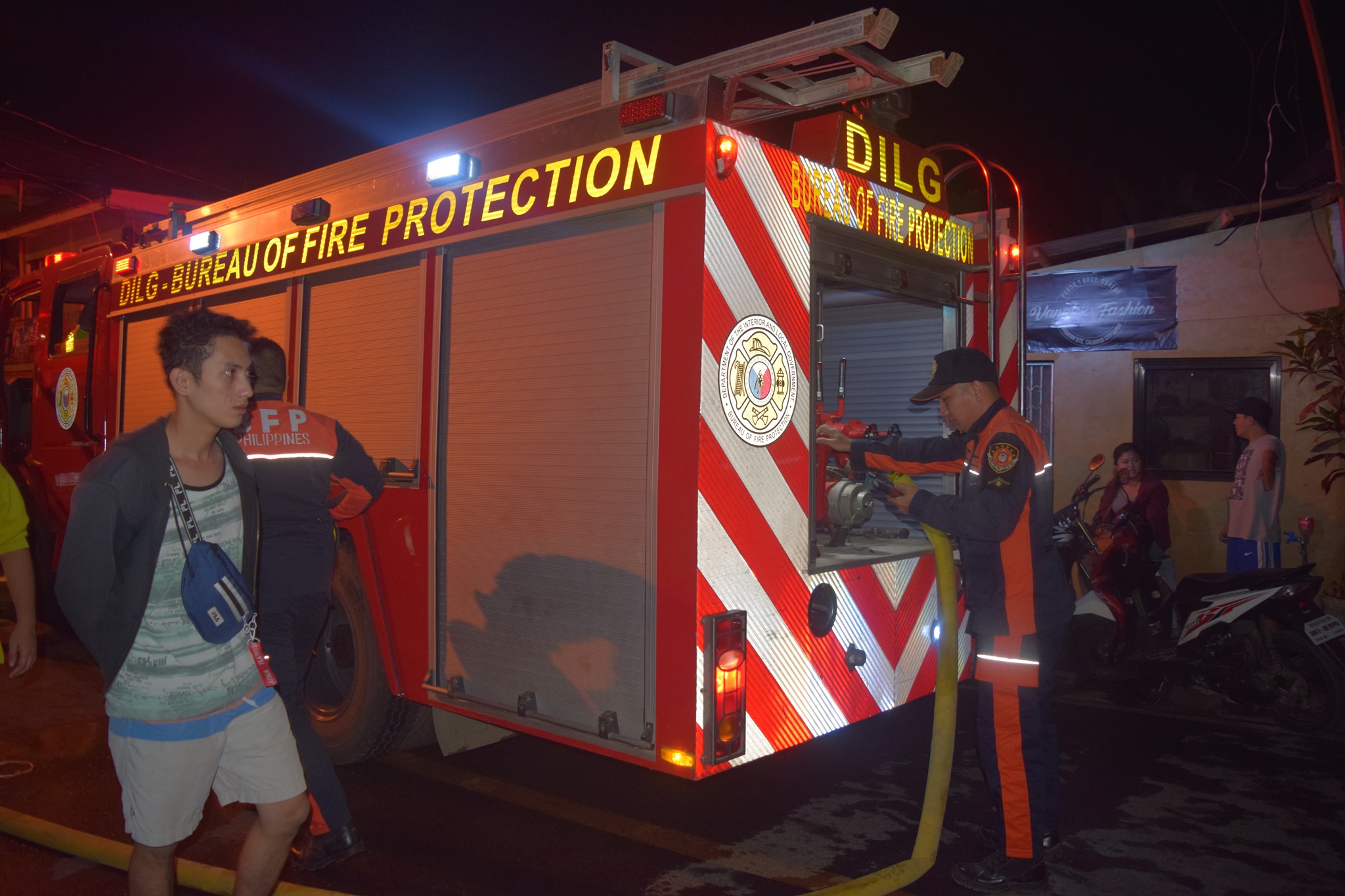 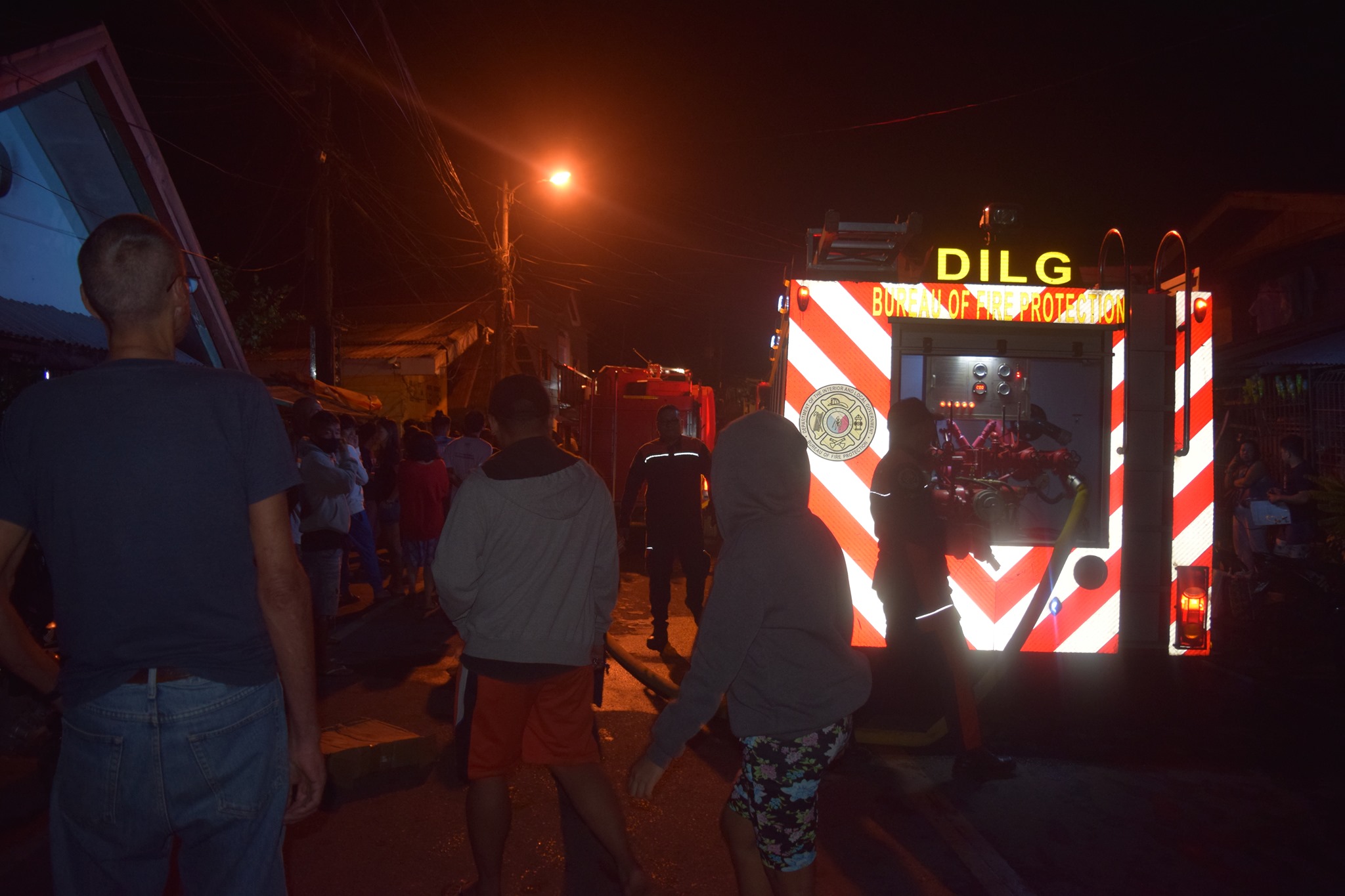 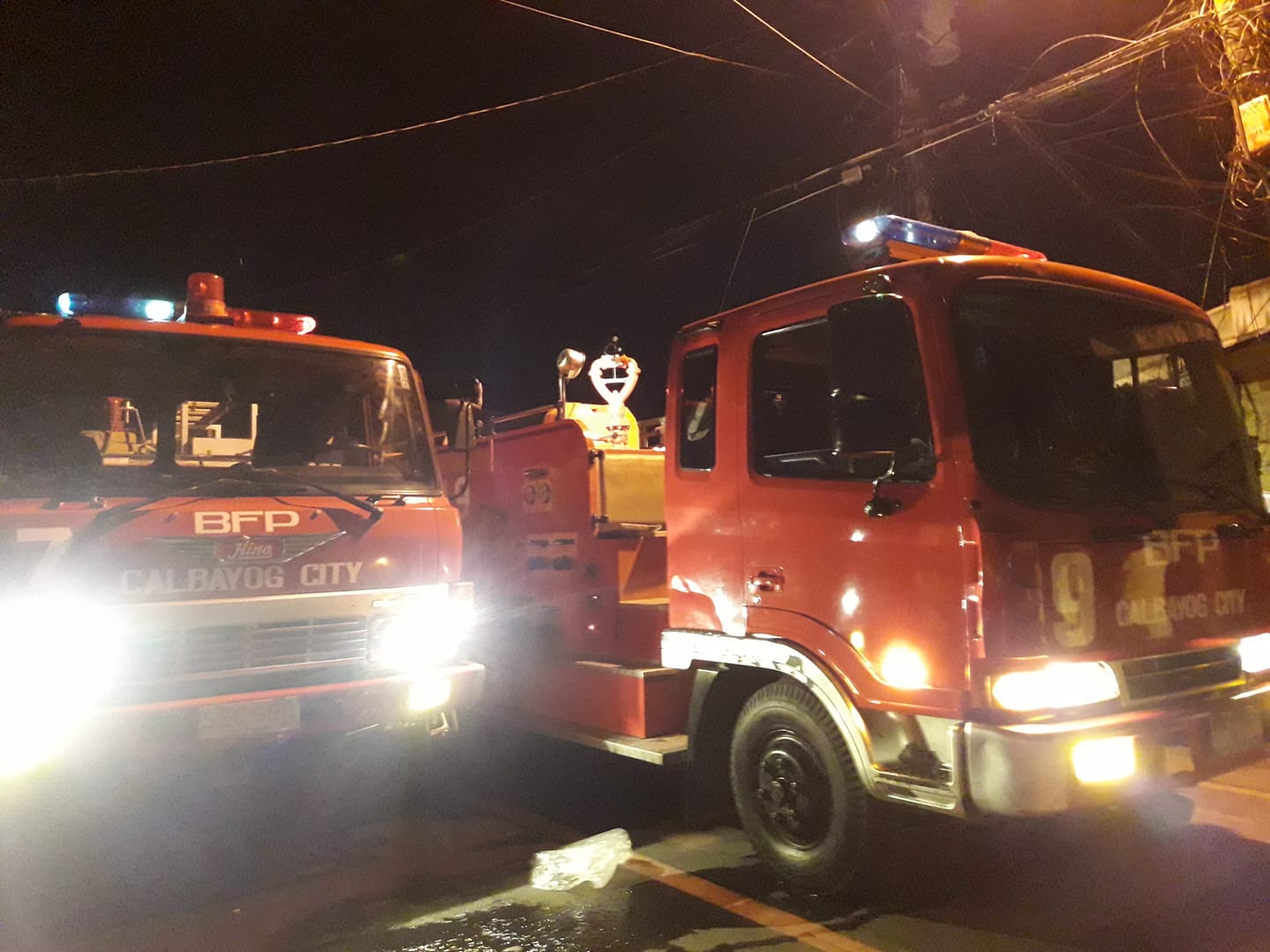