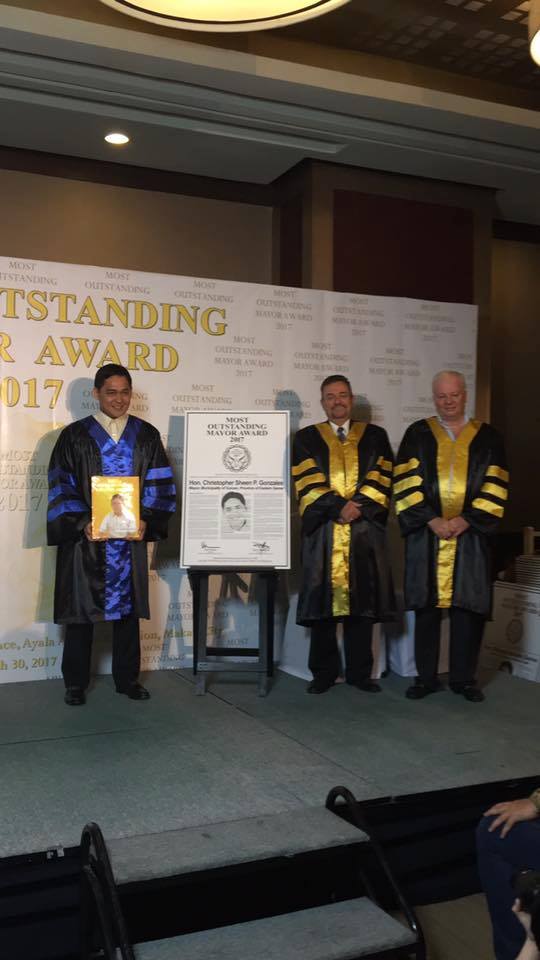 GUIUAN, EASTERN SAMAR – After gaining recognition and popularity in the recently concluded ceremony conducted by the Superbrand Marketing International, Inc. (SMI) at The City Club Makati on March 30, 2017 when Municipal Mayor Christopher Sheen Gonzales was named and conveyed the award as one of the 20 Most Outstanding Mayors in the Philippines for the year 2017, websites and tabloids made netizens and news readers feast on stories about an anomalous firetruck procurement in 2007.

After one term of being elected as Vice Governor for the province of Eastern Samar (July 2010 to June 30, 2013) Mayor Gonzales was only on his fourth month as elected Municipal Mayor of Guiuan when supertyphoon Yolanda’s first landfall devastated the municipality.

SMI said that Gonzales “acted as the focal person in the post-Yolanda recovery and rebalitation efforts when Guiuan was declared as the central distribution hub for the Yolanda-affected municipalities.”

Remarkably, the efforts of Gonzales the recovery of Guiuan served as an example of an effective governance and accountability.

“Mayor Sheen hurdled with other local government units for the valuable operational efforts that help was not felt by Guiuan alone. Thru his valuable social leadership, the southern region of Eastern Samar was able to recover. For more than a year, the people of Guiuan saw abundance in free food supplies and acquired employment opportunities for its people as national and international aid poured in.” SMI stressed.


Addressing his fellow awardees in his speech during the ceremony, Mayor Sheen emphasized that “the conferment of the Outstanding Mayor Award may mean that we have done our share in serving the people and yet there are still a lot to be done in our respective areas.”

Grateful to share his award with his constituents, the Mayor expressed his thanks to the village chieftains and other officials who surprised him with their presence during the ceremony. He further called for the continued support and cooperation of the people for Guiuan to achieve more and reach higher pedestals in development.

On the other hand, barely eleven days after the outstanding mayor award was received, stories about a 2007 procurement of a firetruck of the municipality were all over websites (on-line news), social media and tabloids. It appears however that such story was already published more than a year ago and the current write-ups published were just replication of an Ombudsman resolution over the case executed over a year ago.

The order for the suspension of the six respondents meted out by Deputy Ombudsman for Visayas, Paul Elmer Clemente, relative the case of an alleged anomalous procurement of a firetruck in 2007 has already been executed, served and made effective in February 2016. No other order for suspension was received by the Office of the Municipal Mayor since then.

The two-termer municipal mayor, popularly called “Mayor Sheen,” recalls that as prescribed by the limitations within which to comply with the order of the Ombudsman, his Office immediately carried-out the suspension of the municipal employees. Named for suspension in that order were Municipal Planning Development Officer Ma. Nenita Ecleo, Municipal Budget Officer Esperanza Cotin, Municipal Engineer Arsenio Salamida, Market Supervisor Danilo Colandog, Administrative Officer Felipe Padual and Draftsman Gilberto Labicane.
“They were suspended for six months and one day without pay. These employees are by now back delivering the functions of respective offices having been reinstated since August 2016 when the period of suspension ended. The Office of the Municipal Mayor has not received any other suspension order for any case whatsoever involving municipal employees regarding a fire truck procurement as of this date,” Mayor Sheen informed.

One news story published in a website of an on-line media in April 10, 2017 has named former Mayor Annaliza Gonzales-Kwan and (the above-named) six respondents of being “ordered charged with graft before the Sandiganbayan for the anomalous Php1.985 million procurement of a firetruck in 2007 without public bidding. The news story further said that “Ombudsman investigators found out that the local officials entere into a negotiated procurement for the purchase of a firetruck without proof that the respondents complied with he requirements of two failed biddings under the Government Procurement Reform Act.” https://newsinfo.inquirer.net/888096/ex-guiuan-mayor-faces-graft-rap-over-anomalous-firetruck-purchase 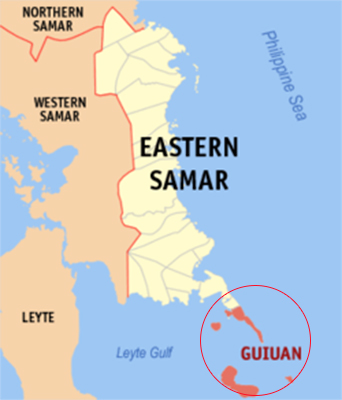 A similar news story also published in April 10, 2017 said that “seven local officials, including the former Mayor of Guiuan, Eastern |Samar, were found liable for the alleged anomalous procurement of a fire truck in 2007. The Office of the Ombusman has found probable cause to charge former Mayor Annaliza Gonzales-Kwan with one count of violation of Section 3(e) of the Anti-Graft and Corrupt Practices Act.” The same story further wrote that “the Ombudsman investigation showed that the respondents did not comply with the regulations regarding the resort to the negotiated procurement of a fire truck in 2007, costing the municipality Php1.99 million.” https://www.gmanetwork.com/news/story/606536/news/nation/ex-eastern-samar-mayor-6-other-face-graft-raps

Finding out the validity of the stories that both came out at the same date, former mayor Annaliza Gonzales-Kwan personally went to the Office of the Ombudsman and the Sandigan Bayan in the morning of April 12, 2017 to check. She was told that there was no such case involving her name and person.

“I just came from the Ombudsman and Sandigan Bayan and told that such info are negative. This may be another political propaganda. It is all over various websites and tabloids. I am living a peaceful life now. It can be checked there. I went there myself. I am however checking on the writer and would want to know where he got his info.” Kwan said in a message to Calbayog Journal.

A story (earlier) published by Rappler contained, among others, that “6 Guiuan employees were found guilty of conducted prejudicial to the best interest of the service” having authorized “the acquisition through negotiated procurement by making it appear that two public biddings were previously conducted” with “the contract, purchase order and disbursement voucher processed in one day. The same six (6) respondents were named in this story that was published in February 15, 2016. https://www.rappler.com/nation/122536-leyte-eastern-samar-officials-penalized-ombudsman 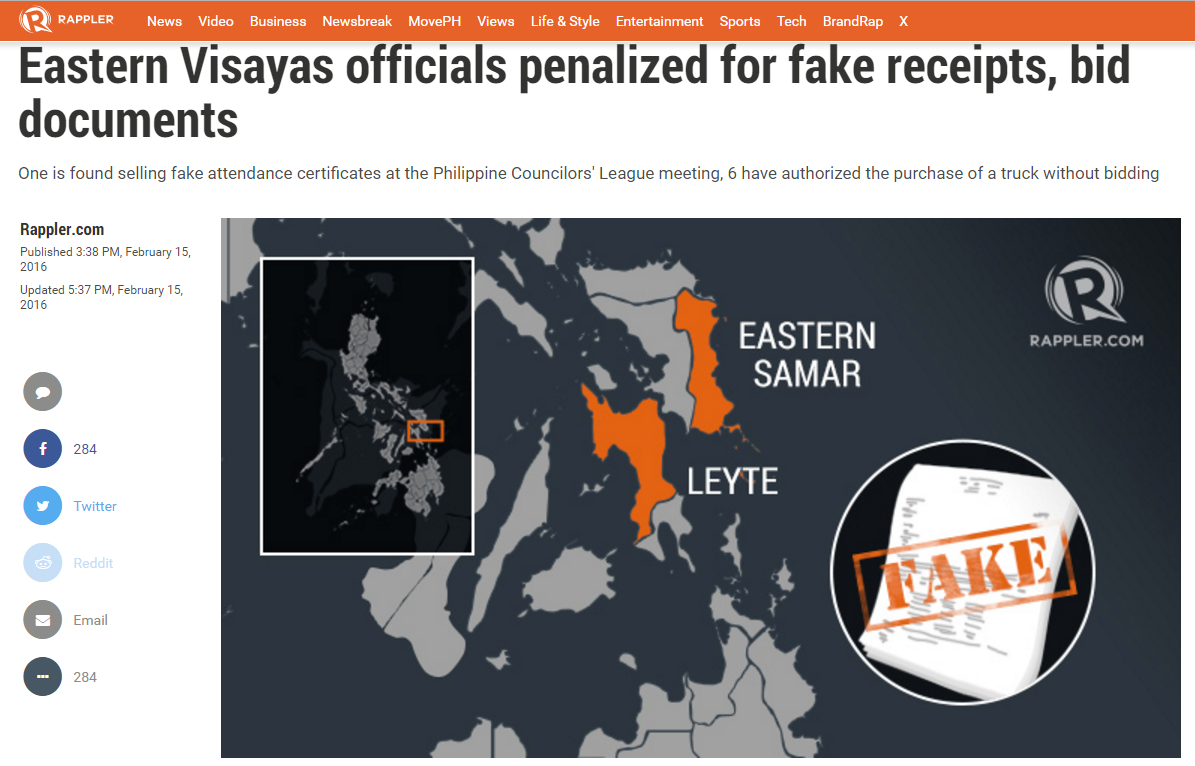 Cagey that the recent circulation of the stories about the case of the firetruck procurement may just be another ploy to mar the present development accomplishments of his administration, Mayor Sheen stressed that “even if this kind of scheme will not hamper the implementation of plans for the betterment of the municipality and its people, there is still the need to check where these ploys are coming out and why, not to mention to have already checked about bearing no veracity with the offices of the Ombudsman and the Sandigan Bayan." 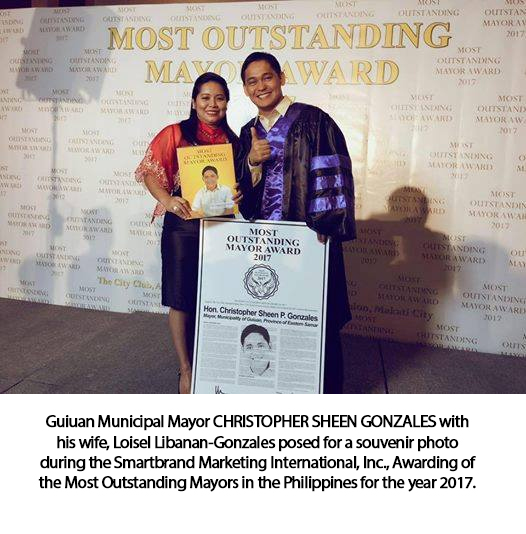