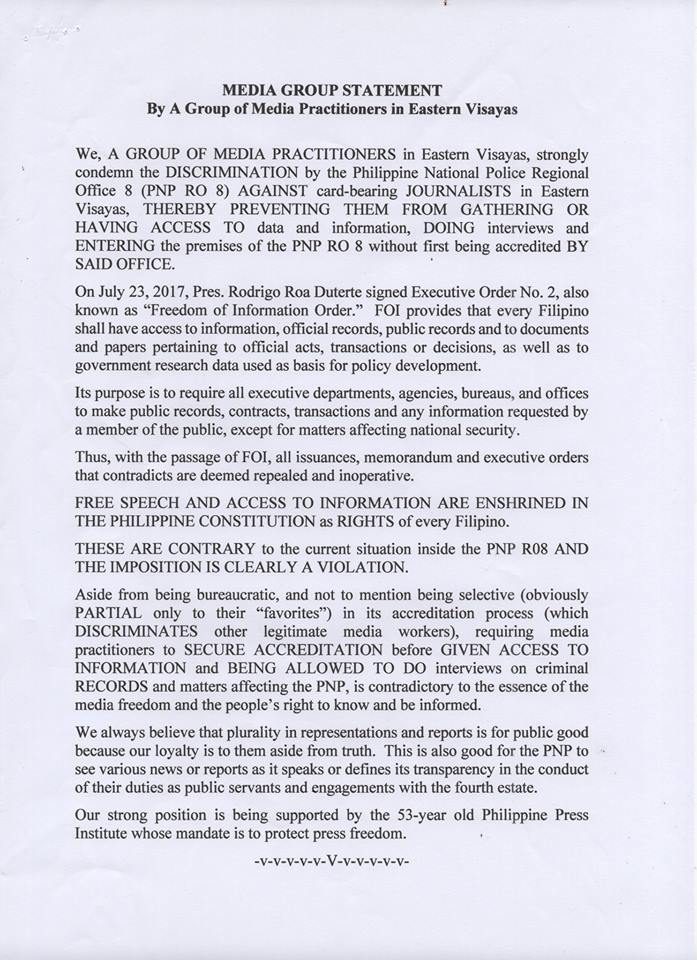 A Media Group Statement, carrying the support of the Philippine Press Institute (PPI), was issued by a group of Eastern Visayas journalists against the Philippine National Police Regional Office 9 (PNP RO 8) for press freedom violations.
The statement – a collaboration of 60 media practitioners in the local and national dailies/weeklies, radio stations and television networks coming from the six provinces of Eastern Visayas – denounced press freedom violations by the PNP RO 8 when media practitioners were required to secure accreditation before being allowed to enter the premises of the PNP RO 8 to make interviews and given access to data and information.

Citing Executive Order No. 2, also known as the “Freedom of Information Order” signed by President Rodrigo Roa Duterte and the freedom of speech and access to information being protected in the Philippine Constitution, the media group maintains that such imposition for accreditation is contrary and are clear violations to the right of every Filipino to information.

Appended with another group issuance labeled “So the Public May Know,” supported by copies that vouch for the series of events and facts narrated, - prints of the group statement were sent to the Office of the PNP RO 8, police stations and media outlets in the islands of Samar and Leyte. 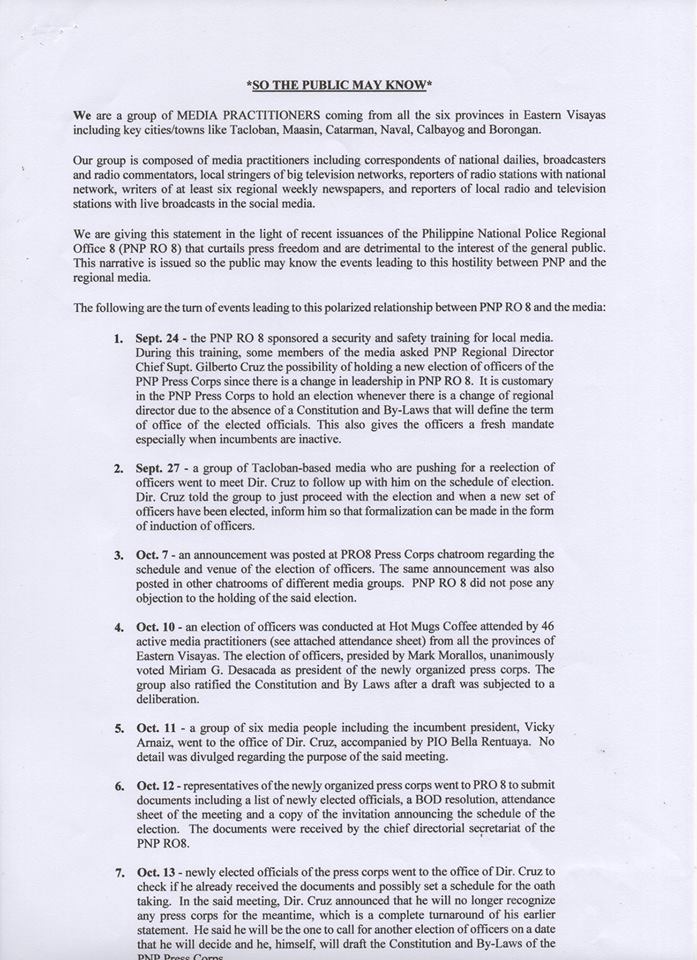 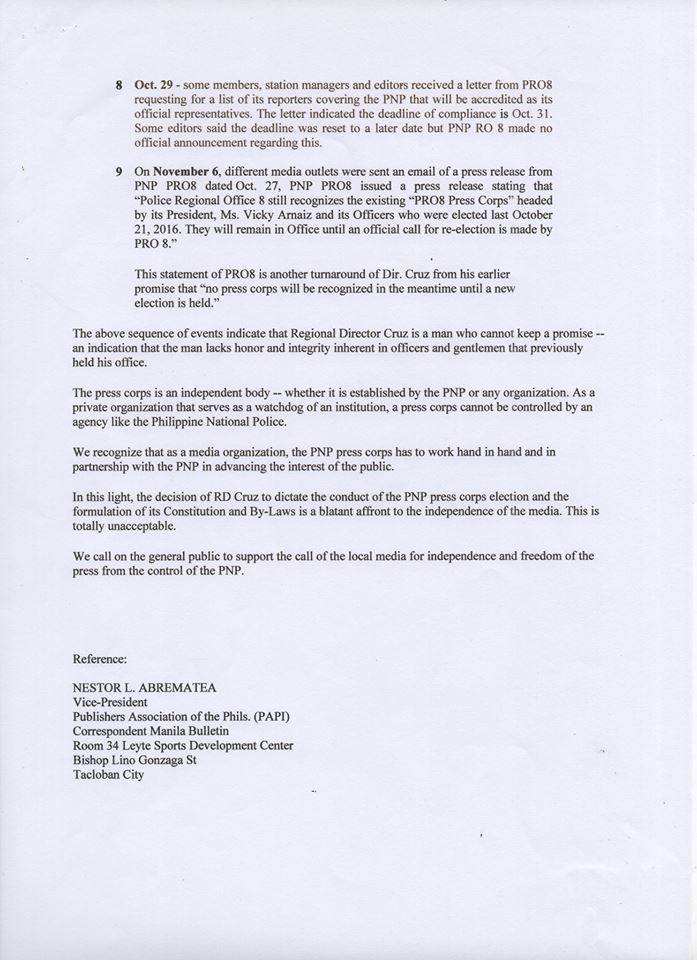 With reproductions of the group statement reaching the Manila-based Center for Media Freedom and Responsibility (CMRR), its head John Paul Omac was quoted, in one of the news stories earlier published, as saying that “as part of our thrust to promote press freedom, we are monitoring threats and attacks against journalists.”

“We are writing a press freedom statement on the issue which we will forward to our network of other press freedom organizations. We will also relay your situation to the Presidential Task Force on Media Safety who might be able to extend additional help on your situation,” Omac assured. 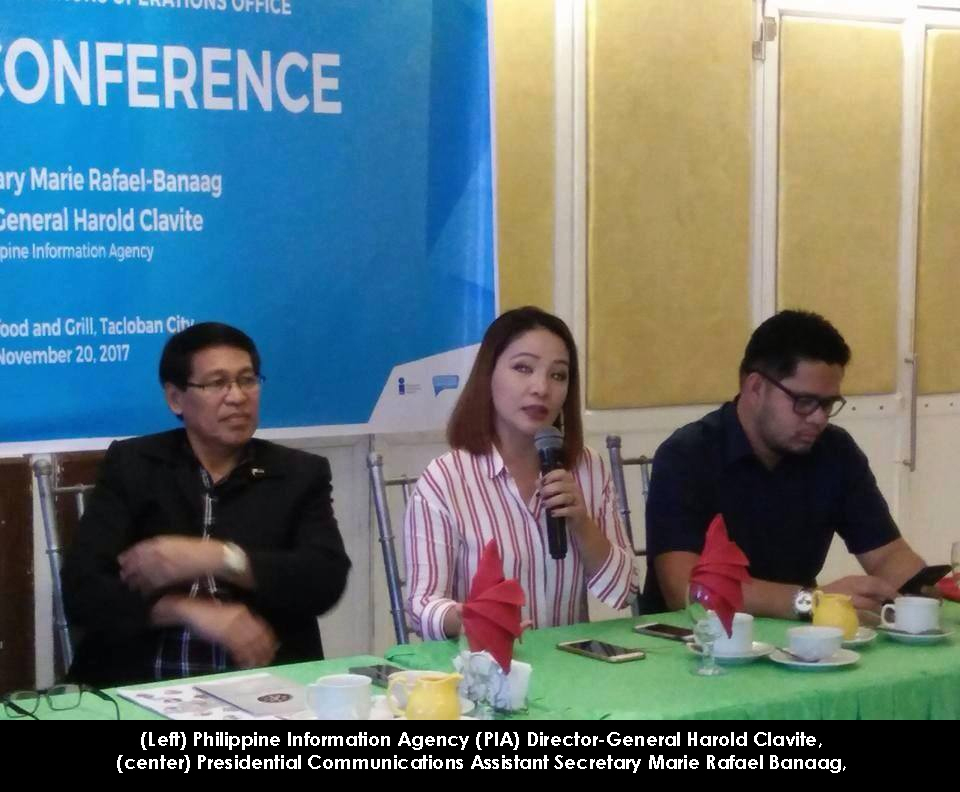 During a press meeting in Tacloban City, Presidential Communications Assistant Secretary Marie Rafael Banaag, Philippine Information Agency (PIA) Director-General Harold Clavite, and a number of officials from Manila who were in Tacloban to meet the local media regarding the issues surrounding the local media, Banaag told local media practitioners that PNP 8 Regional Director was supposed to present but, for unknown reasons, did not come.

Banaag emphasized that media concerns and issues, among others, will be brought and ironed out when the group meets with the PNP Regional Director as the accreditation (requirement) cannot be allowed because media practitioners need reasonable access to information from the police.

Meanwhile, the PNP RO 8 has yet to be heard. Copies of the Media Group Statement with the accompanying issuance, “So The Public May Know” and its appendices, have already been furnished to their office a week earlier.(CJ)