Photo sent to CJ thru Messenger 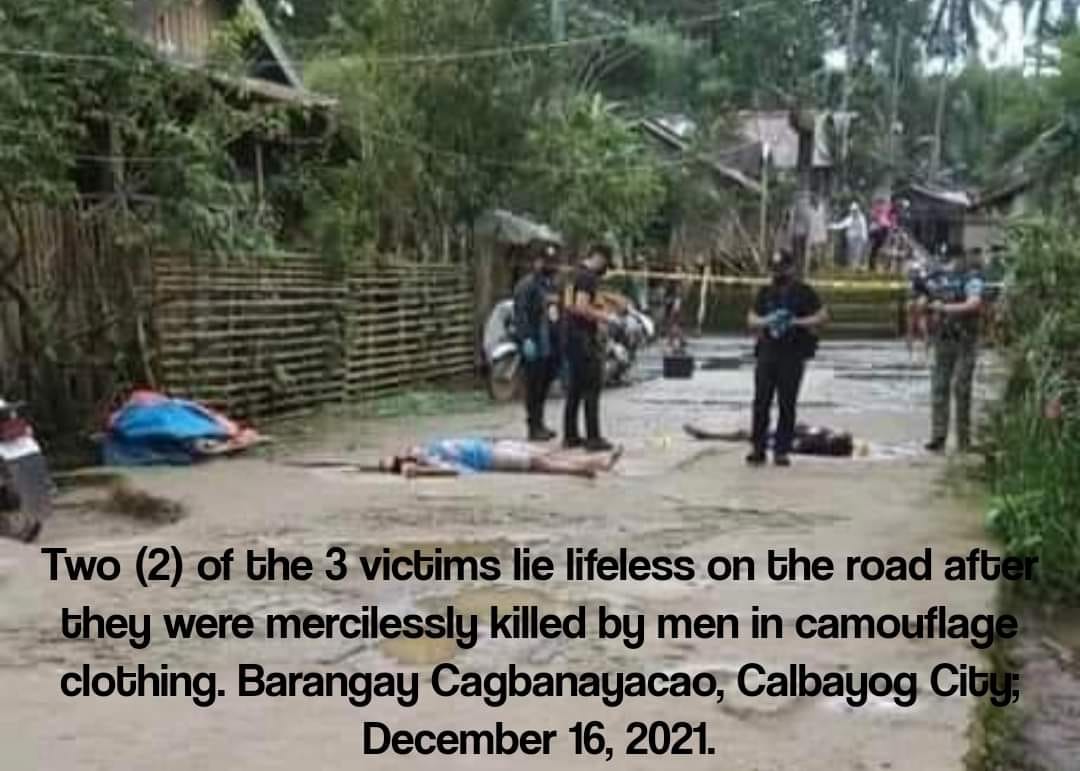 CALBAYOG CITY – Three (3) helpless barangay leaders were murdered by a group of armed men at about 12:10 AM of December 16, 2021 in Barangay Cagbanayacao located in the Upper Happy Valley area, one of the city's remote communities.

Responding police investigators found Miguel Galvan y Calagos lifeless at his house in Purok 1. GALVAN was 54 years old, married and a member of the Lupong Tagapayapa in the barangay.

Witnesses told police investigators that, at about shortly past midnight, the group of armed men wearing camouflage clothes barged into the respective houses of the victims. The armed men demanded from victims for the surrender of their firearms.

When the victims failed to satisfy the demand, the armed men forcibly dragged them out of respective houses and were brought to a partially concrete road in Purok 2 where shots rung out.

All of the victims sustained gun shot wounds in the head causing their instantaneous death.

Unconfirmed reports say that the body of Galvan was immediately retrieved from the road and carried by the family to their house so that responding forces arrived at the crime scene with only two lifeless bodies lying on the road.

Police investigators were also told by barangay residents that the armed group of men were seen fleeing on foot towards the mountainous area of the said barangay.

Hot pursuit operation is currently in progress being conducted by police officers and members of 43rd Infantry Battalion while the PNP’s Calbayog Forensic Unit processed the crime scene.

As of this writing, the cadavers are in one of the city’s funeral parlor where a post mortem/necropsy examination will be conducted by authorities of the City Health Office upon request of the investigator-on-case.(CJ/JMM)