Calbayog City – Waray-Waray language and culture will be given center stage at the 11th Maharlika Sunrise Festival.

The Maharlika Writers and Artists Federation (MWAF), which promotes environmental care and progressive change in the nation through art and literature, will bring its three-day roving Festival to Calbayog City this November 21-23.

The theme of the 11th Maharlika Sunrise Festival is “Waray Waray Naman”. The Festival literature states that the “festival will serve as an avenue to tell the world that waraynons do have their share of art geniuses.”

The objective of the Maharlika Sunrise Festival, according to its literature, “is to ensure a continuing national cultural movement to showcase all aspects of arts in the country.”

Among the line-ups of artists, musicians, and writers to be featured in the Festival include the following:

· Katrin de Guia, author of KAPWA—The Self in the other (2007 First Book Award finalist)

· Professor Shermon Cruz, professor of political science and public administration at Northwestern University and Northern
Christian College in the Philippines

· Bobby Balingit of The Wuds

· Tribal Bands from Region 8 and other regions 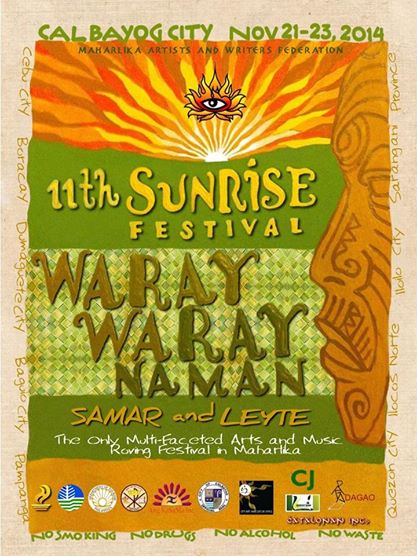