2018 LIGA OFFICERS as they take their Oath of Office before City Mayor Ronald P. Aquino, July 16, 2018
CALBAYOG CITY - The newly elected officers of the city’s chapter of the Liga ng mga Barangay (LIGA) took their respective Oath of Office right after proclamation of winners in the election proceedings conducted and completed at the Convention Center on July 16, 2018.

Ninety-Eight (98) Punong Barangays (village chiefs) attended the organization of the city’s chapter of the LIGA. Out of 157 barangays (villages), 59 did not have representations during the day. 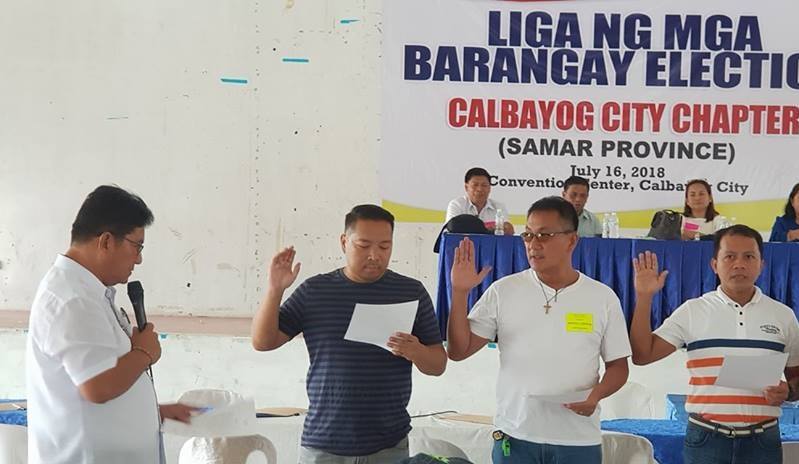 Taking their Oaths (from left to right) are LIGA President ARIEL ROSALES; Vice President MARICAL AQUINO, JR., and AUDITOR Marcelito Mercader.
There were two (2) contenders for the LIGA presidency. One of them, Raul Reyes of Tinambacan Sur, did not show-up during the elections. Calbayog Journal has no known reasons for such absence when efforts to reach Reyes as of this writing has proven futile.

Right after the May 14 elections, Calbayog Journal identified 96 winners to the position of Punong Barangay as supporters of the present city administration. Two (2) additional Punong Barangays signified support to Mayor Aquino in June 23, 2018 during the mass oath taking ceremonies of the Sangguniang Kabataan and Barangay Officials.

Managed by the Department of the Interior and Local Government (DILG), the LIGA election was observed only by representatives from the COMELEC, the Department of Education (DepEd) and SOS. Media practitioners - government or private - were allowed inside the premises of the Convention Center only after the proclamation of winners. (CJ)

MEMBERS OF THE BOARD Liga ng mga Barangay - Calbayog Chapter 2018
,