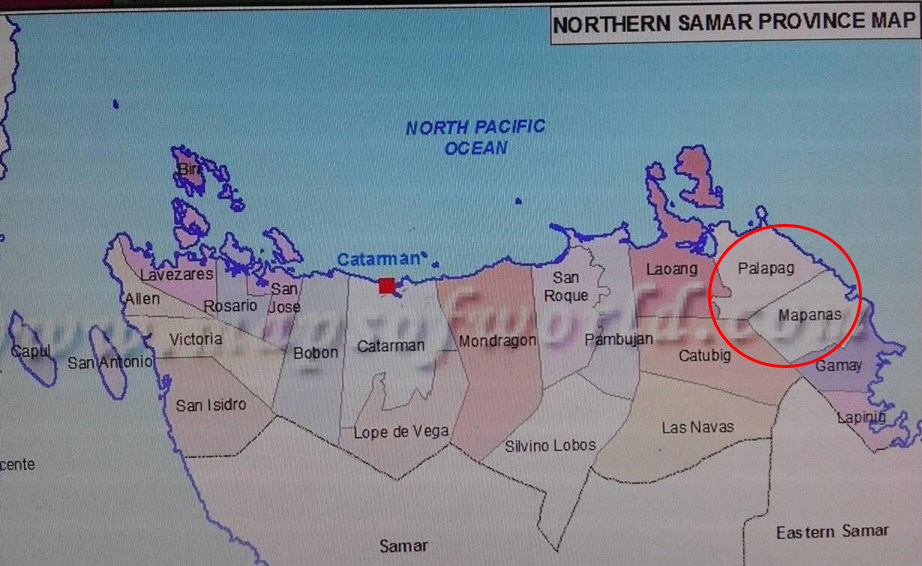 NORTHERN SAMAR – Children have become preys to the massive recruitment of the New People’s Army (NPA) in the province a week following the rescue of a 12-year-old-boy suspected to be NPA courier and after series of clashes between the NPA and the Philippines Army around Eastern Visayas over the past three weeks.

About thirty (30) children are reported to have been recruited by the NPA. These children come from the towns of Mapanas and Palapag in Northern Samar and are now believed to be in the training camps of the underground movement. They will be used as spies, messengers, cooks and for the delivery of ammunition and other supplies to rebel camps while undergoing indoctrination of political ideology and training in the use of artilleries and fighting.

A week earlier than the massive recruitment was uncovered, a 12-year-old-boy believed to be an NPA-child-member and have been utilized as courier was rescued (on May 13, 2017). The boy who is now under the care of the Provincial Social Welfare and Development Office after undergoing interview and medical check-up, was found in Barangay De Tubang, Silvino Lobos carrying weapons and ammunitions hidden in a sack half-full of rice. Uncovered from the boy’s sack were twenty (20) rounds of 5.56 mm ammunitions, three (3) cartridges of 7.62 mm linked for M60 machine gun and two (2) cartridges of 5.56 mm linked for K3 machine gun. 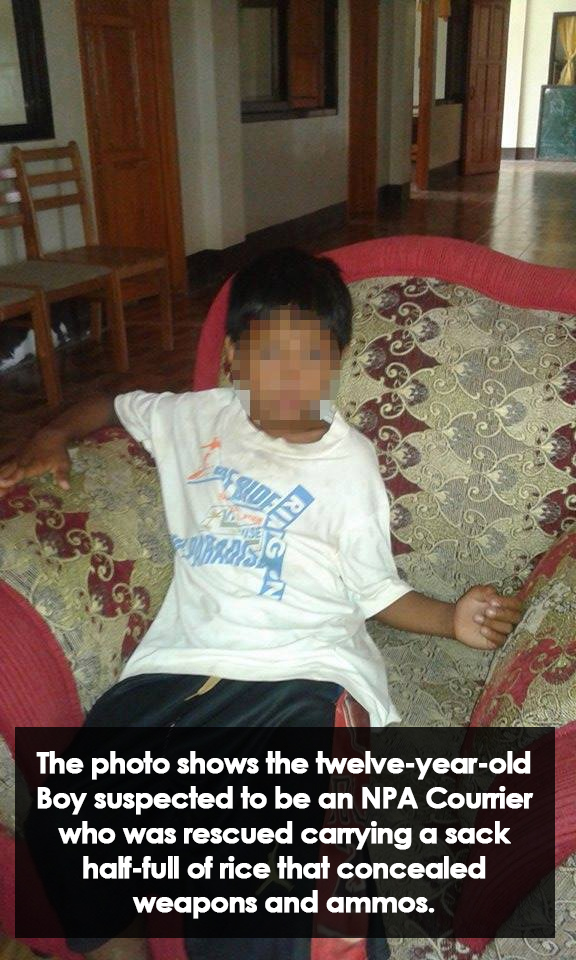 Decrying the involvement of minors in communist rebellion as it is a clear violation of the Comprehensive Agreement on Human Rights and International Humanitarian Law, Major General Raul M. Farnacio Commander of the 8th Infantry Division based in Catbalogan City said that “children aged below 18 years are prohibited to participate in any hostilities nor should they be used to carry supplies that could put their lives in danger.”

In a statement, 803rd Infantry Brigade Commander, Brigadier General Mario Lacurom said, “NPA’s recruitment of children is nothing new, especially in insurgency-infested parts of Northern Samar where families cannot afford basic necessities. I have seen how this war in this area has affected so many talented children but who are unable to go to school.

“Parentless children who grew up by themselves with fear but unprotected from ferocity are easy preys. Having been recruited by the NPA, these children, will be exposed to different forms of violence and exploitation. Thinking that it is a way of life, they would often choose to fight,” Lacurom added.

A former member who spent several years with the underground movement (whose name is withheld) informed that the armed force of the Communist Party of the Philippines (CPP) customarily eye at the youth for recruitment “because children do as they are told, are easier to intimidate and are less likely to run away compared to adults.”

“These children,” the informant continued, “who come in contact with the rebels through some barangay organizations, most often, want to become soldiers so they offer themselves for services while others are directly recruited by the rebels and there are still those who want to follow in the footsteps of their rebel parents and relatives,” thereby adding that “situations of displacement and poverty make children even more vulnerable to recruitment.”

Calling for a stop recruitment and the use of minors in illegal and underground activities, Maj. Gen. Farnacio stated an appeal: “Let us give our children the chance to grow up while peacefully learning from their youthful experiences and allow them to contribute to society thru their own unique ways.” 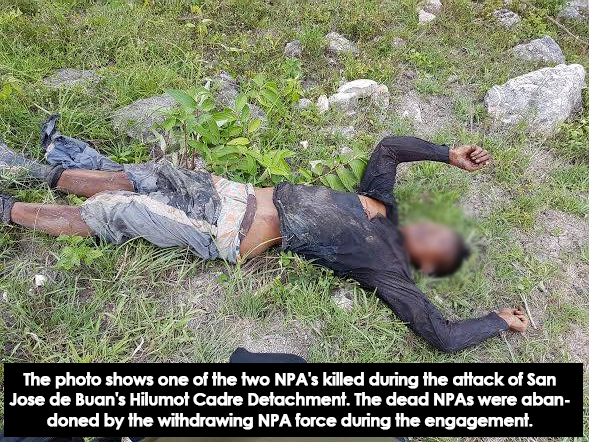 To recall, there were a series of NPA clashes with the government troops around Eastern Visayas in the immediate past three-week’s time. Both sides - the NPA and the government’s army - suffered casualties - injuries and fatalities. However, only casualties of the government force are fully accounted for. Except for a few abandoned dead bodies in the areas of engagement, only trails of blood of the withdrawing NPAs can be traced.

ATTEMPTED OVERRUN OF PHIL. ARMY DETACHMENT: In April 29, 2017, the NPA’s, in an undetermined number, attempted to overrun the detachment, manned by Cadres of the 52nd Infantry Battalion, in Barangay Hilumot, in the municipality of San Jose de Buan by attacking the forces at early dawn. Because of skilled resistance, the offensive rebels ended up withdrawing from the area leaving trails of blood along their path of exit, two of their members dead on the ground, one (1) AK 47 Rifle and two (2) handheld radios. Five government troopers wounded in the attack, having fully recovered, were awarded of medals.

TWO ENGAGEMENTS IN MAY 10, 2017: A 30-minute early morning gun battle in Barangay San Antonio in Hilongos, Leyte yielded seizure of two (2) pieces of AK-47 rifles, magazines, live ammunitions, bandoliers, assorted food stuffs and medicines as well as subversive documents believed to be owned by the rebels who withdrew from the area. The engagement started when a civilian in the community relayed information to the members of the 78th Infantry (Warrior) Battalion of Philippine Army about the NPA’s on-going extorting revolutionary taxes from the villagers at that time. No one from the government troops were wounded while an undetermined number of casualties on the enemy’s side were seen being dragged away by their mates.

Information relayed by community residents about the presence of armed communists in an area between the boundaries of Barangay Camayaan, Silvino Lobos, Northern Samar and Barangay San Roque, Matuguinao, Samar, triggered troopers of the 43rd Infantry (We Search) Battalion to immediately respond for purposes of shielding the people from extortion activities. It, however, turned to a 10-minute firefight between the troops that ensued at around ten o’clock in the evening. Having been hit, Pfc. Jaime C. Mabini, Jr. (Inf) PA died while undergoing medical treatment at a nearby hospital. There was one dead body count on the side of the NPA.

MIDMORNING COMBAT OPERATIONS: A combat operations towards the NPA group who were asking for food and medicines in Barangay Mahayag in Matuguinao, Samar on May 16, 2017 (9:45AM) engaged the troopers of the 43rd Infantry (We Search) Battalion to a gun-battle with over 20 rebels that lasted for, more or less, fifteen minutes, resulting to the death of Cpl. Renjie P. Ada (Inf) PA and an undetermined number of casualty on the NPA side. 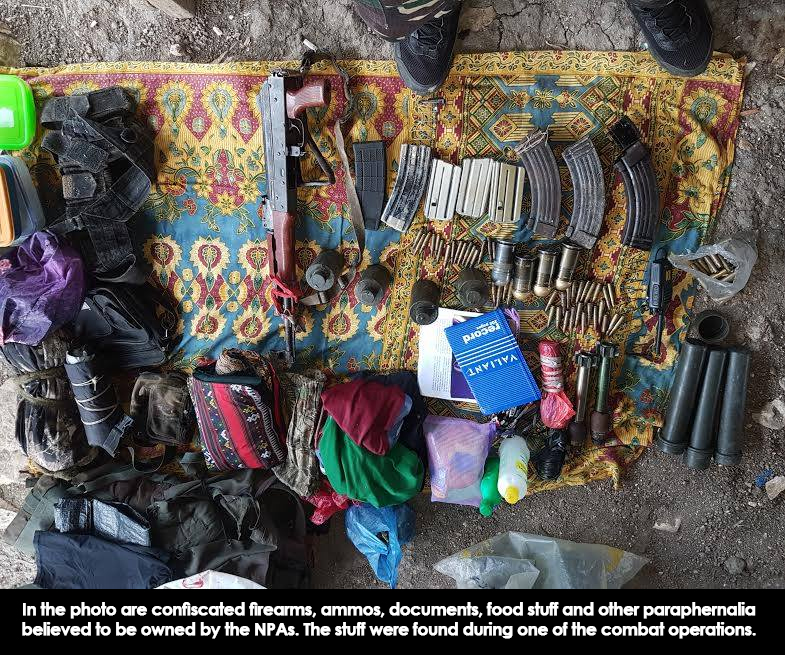 After the NPA attack-to-overrun the detachment in San Jose de Buan has failed and the series of clashes between the rebel and the government troops, the Philippine Army has stepped up intelligence operations in Eastern Visayas. Monitoring of activities in upland communities has been intensified. The army has also called for the continued active participation of the communities to immediately inform nearby military units about the presence of terrorist/rebel groups.

In one of the reports, Maj. Gen. Farnacio, in calling for peace, was quoted as saying “Your Army is sincere in its offer for peace. We will ensure the personal safety of those who will choose to lay down their arms and peacefully return to their families. Lay down your arms and return to the comfort of your families and friends. Live peacefully and take care of your children and, as they grow, make them become productive members of the community.”

Grateful to serve and protect the people of Eastern Visayas until the last breath because of the commitment to achieve a long lasting peace in the region, Farnacio assured that “the 8th Infantry Division will continuously conduct massive combat operation as long as the presence of the armed group still persists in the far flung barangays conducting mass recruitment, collecting revolutionary taxes and instilling psychological fear in the hearts and mind of the populace.”

“Massive military operations will be relentless against these lawless elements as long as peace and development in Eastern Visayas is at stake,” Farnacio sternly concluded.