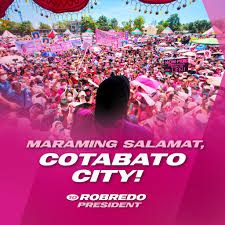 The head of one of Mindanao’s biggest organizations of peace and human rights advocates urged his colleagues to join the people’s rally for presidential candidate Vice President Leni Robredo on Wednesday, March 16 in Cotabato City.

In a message sent to members of the Consortium of Bangsamoro Civil Society (CBCS) on Tuesday, March 15, their chairman Guiamel Alim said he was encouraging them to join the rally on March 16, and be at the Polytechnic College now Cotabato State University.

Alim expressed his support for Robredo after “long days of discernment and reflections”, adding that the rest of the candidates are good but Robredo is “the next best president” and “the one”.

From a network of 29 civil society organizations (CSO) of the Bangsamoro Autonomous Region in Muslim Mindanao (BARMM) and other communities in Mindanao, CBCS now has 160 member organizations.

In February, Moro civic groups in BARMM have also thrown their support behind the presidential bid of Robredo. This was the consensus by Bangsamoro Supports Leni for Justice and Peace (BSLJP), a coming together of civil society and people’s organizations in the Bangsamoro region.