THE CONSEQUENCE OF CRISIS IS CHANGE:

After Covid-19, life will never be the same again. A paradigm shift will come. That change is the veritable gauntlet the pandemic has thrown at the face of mankind. Now, the world confronts an existential challenge that every country on earth and its peoples must overcome and win.

Universal wisdom teaches: “There is an opportunity in every crisis and the deeper the crisis, the better the opportunity can be.” The word ‘crisis’ comes from the Greek, meaning “to separate, to sift.” Verily, crisis is an opportunity “to pass judgement, to keep only what is worthwhile.” On the other hand, the Chinese use the same character to denote both ‘crisis’ and ‘opportunity.’

It is imperative that our country’s leadership seize the advent of Covid-19 as launching a productive momentum for seeing, creating, devising, planning opportunities for solving long festering problems. Simply put, opportunities to change for the better and the wisdom to discern what is “better!” Do we have the attitude, talent and fortitude to “seize the moment?”

Evidently, choices have to be made, based on priorities. Let me invite you to accept what appears to me to be the most serious problem begging for a solution, the solution for which must yield the greatest good for the greatest many. Let me posit, (again!) that decongesting Metro Manila (and its indivisible component, dispersal/redistribution of population) is quintessential! 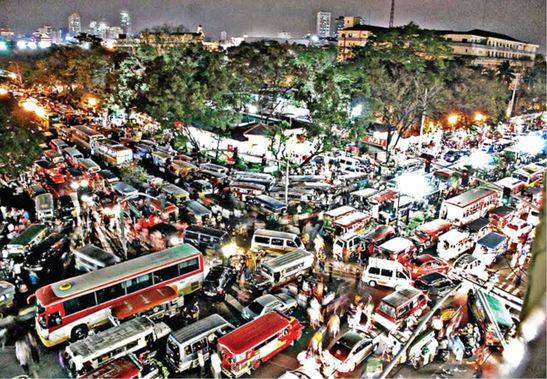 SAVING METRO MANILA: OUT-OF-THE-BOX IMAGINEERING
Let me attempt to hark back to how insidiously the deterioration of Manila came to pass over a span of 75 years, from her old glorious “Pearl of the Orient” days to a Greater Manila in wartime, sliding to Metro Manila and now, even flirting with foolish visions of a calamitous unmanageable Mega Manila!

The unnoticed descent to urban chaos began even before the last ember was extinguished in a still conflagrated Manila, when she was liberated in 1945. The emergence of “barong-barong” housing (makeshift shanties out of surviving reusable materials such as corrugated sheets and timber) in desolate rebuilding Manila, ushered the entry of “informal settlers,” squatters, upon unused private properties and open public spaces. They sprang overnight and kept on sprouting, never ever to abate.

Metro Manila today, over any other city in the world with claims to civilized modernity, hosts the largest concentration of informal settlers! There is no city within Metro Manila that does not include a prominently visible slum and squatter area, gated communities for the rich and gleaming high-rises notwithstanding.

All these because immediately after WW II, only Manila possessed the unrivaled dominance, to the exclusion of all other venues, for economic activities and jobs. Manila was all things Philippines! There persisted unequal geographic distribution of economic activities and employment opportunities. Thus, the unceasing inflow, the deluge of employment -- and livelihood-seeking population. A disaster-stricken people always seeking succor in the metropolis. Manila was the only irresistible and alluring magnet for jobs, a situation no longer justifiable. Metro Manila is besieged not only by every conceivable urban ill but by irrelevant and anachronistic occupancies, those that do not require a Metro Manila presence to fulfill their respective missions. This must change.

IMAGINE, IF YOU WILL, AN OFFERED SCENARIO:
The General Headquarters of the Philippine Army relocates to Nueva Ecija; the Philippine Navy and the Coast Guard to Iloilo or somewhere in the country’s center seas; and, the Philippine Air Force to the Iligan-Cagayan corridor in Mindanao. (Malaybalay, Bukidnon was where Quezon and MacArthur took flight from, escaping to Australia in 1942.)

The scenario is classic transfer of self-contained communities with people, payroll and services, around which regional development will be a natural consequence. By such omnibus decision, our Republic shall have achieved a more equitable geographic distribution of economic growth with all the ensuing opportunities for jobs and livelihood regionally made available at the same time rescuing Metro Manila from the demographic monstrosity she was neglected to become.
And while I am at it, why must the nation’s psychopathic ward, the National Mental Hospital, be in our urban midst? The national penitentiary, too, has a Metro Manila address!

Population dispersal/reallocation is an economic stimulus never before taken advantage of. “In one fell swoop” it will create new employment, new wealth, more venues for new businesses and livelihood, new taxes and new sources of taxation while Metro Manila is rescued from the foretold “gates of hell!”

I dare say that “Build, Build, Build” will not solve the horrendous vehicular traffic nor improve the quality of life in Metro Manila. But decongestion will!

Already there is a silver lining happily hanging over Metro Manila in this “Age of Coronavirus.” The air is irrefutably cleaner, road travel more efficient, the environment enhanced, folks more civilly disciplined, healthier and hygienic practices learned, all as never before! All a teasing taste of decongestion brought about by “shelter-in-place”/ community quarantine strictures as well as work-from-home arrangements, etc. Might these be the new normal?
Does anyone in the country’s leadership know and understand that Metro Manila is in violation of the Constitution? And who might have been remiss and neglectful?
Article II, Sec. 16 (Declaration of Principles and State Policies) says: The State shall protect and advance the right of the people to a balanced and healthful ecology in accord with the rhythm and harmony of nature.”

--------
ABOUT THE AUTHOR:
Tomas 'Buddy' Gomez III began his professional media career in ABS-CBN's (previously Chronicle Broadcasting Network) DZQL-Radio Reloj in 1957, after which he spent 25 years with the Ayala Group.

In 1986, then Pres. Cory Aquino appointed him Consul General to Hawaii and later served as her Press Secretary.

During the Ramos administration, he was chairman and president of state-owned IBC-13 Network.

After government service, he became an ‘OFW’ in the U.S., working as front-desk clerk and then assistant general manager of a hotel. He also worked as a furniture and antique restoration specialist.
He is now retired and lives in San Antonio, Texas.