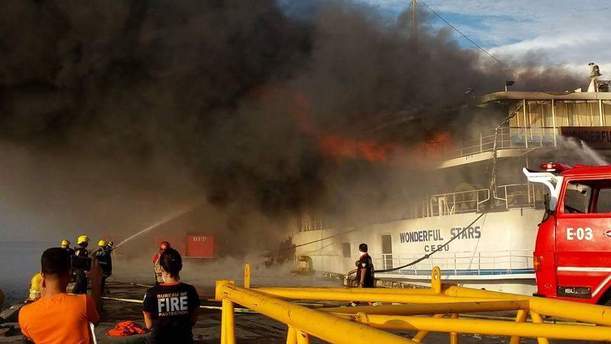 ORMOC CITY- The cause of the fire which greatly damaged the MV Wonderful Star of Roble Shipping Lines in Ormoc City early morning of Saturday August 15,2015, remains undetermined up to this time.

Senior Fire Officer Roel Wenceslao who heads the investigating team of the Ormoc City Fire Station told the Calbayog Journal that it is now the fire investigators from the central office of the Bureau of Fire Protection in Manila who will carry out the systematic inquiry to determine the origin of the fire since the cost of damage to the passenger vessel is estimated to have reached close to a Hundred Million pesos.

Wenceslao explained that the investigation of fire incidents becomes the jurisdiction of the BFP central office when the worth of damage exceeds Sixty Million pesos.

He also said that no oil spill happened as no presence of oil was observed in and around the waters where the MV Wonderful Star docks.

The Roble ship which carried over 500 passengers and crew caught fire while approaching the wharf in Ormoc at dawn of August 15 but no life was lost in the incident.