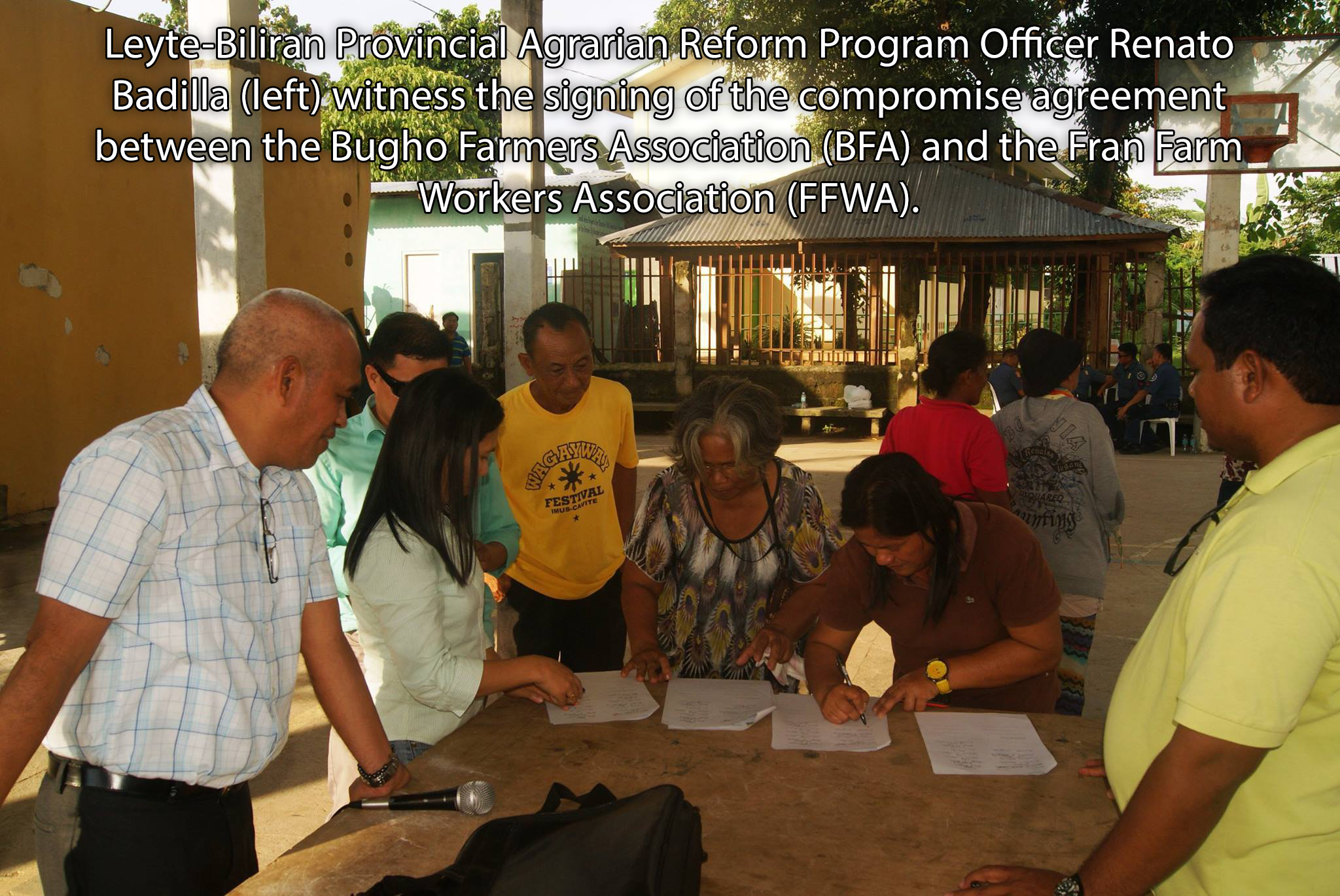 ORMOC CITY – Rival farmer groups ended their 16-year feud by amicably signing a “compromise agreement,” ending a conflict marked by lengthy legal litigation, bloodshed and animosity leading to a successful implementation of the Comprehensive Agrarian Reform Program (CARP) in the area.
The Fran Farm Workers Association (FFWA) and the Bugho Farmers Association (BFA) involved in the Fran Farms Case, finally signed a compromise agreement that would allow both groups to work peacefully in the formerly disputed landholdings.
Rosenda Apay, BFA leader, expressed their willingness to cede the 21 hectares in favor of the FFWA leading to the signing of a compromise agreement, while FFWA leader Benjie Malinao pushed for the adoption of the said agreement. 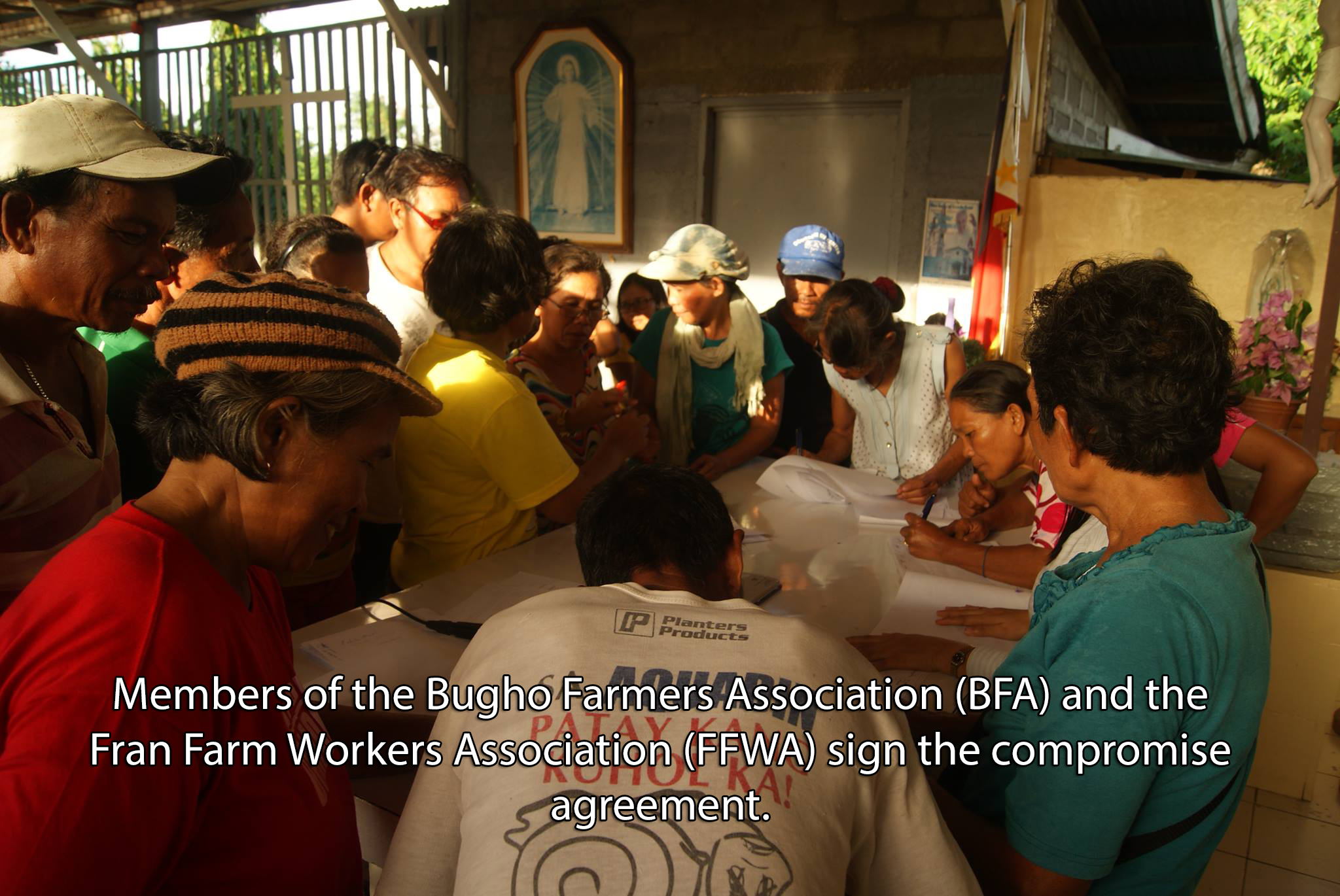 The controversy started in 1999, when the rival groups questioned the identification and qualifications of each other as agrarian reform beneficiaries (ARBs) and on the possession of the disputed landholdings which resulted to a series of legal actions and litigations lasting for 16 years.
At one point in 2007, an FFWA farmer-leader was killed inside the premises of the DAR Ormoc City Office, creating deep hostility and distrust among the opposing groups.
At the center of the controversy are two parcels measuring 25 hectares and 21 hectares, formerly owned by the Fran Farms Corporation, located at Barangay Matica-a in this city.
Both Groups claim a better right to the landholdings, where officials of the Department of Agrarian Reform (DAR) tried to arrive at an amicable settlement with no success.
Finally, the DAR Adjudication Board recently issued a Final Decision confirming the award of the controversial landholdings both in favor of the BFA.
But in a rare gesture of goodwill and sincerity, the BFA offered the parcel of 21 hectares to the FFWA, stating that they will be contented with the parcel of 25 hectares.
After much reservation from the FFWA, they accepted the offer, paving the way to the signing of the initial compromise agreement on December 15 and was finalized on December 22.
For the first time on December 15, the rival groups exchanged greetings and handshakes after a grueling negotiation and intense mediation led by DAR Leyte-Biliran Provincial Agrarian Reform Program Officer Renato Badilla with Legal Division Chief Atty. Daniel Pen, and mediators Atty. Kenlima Pen and Eulogio Elmido. 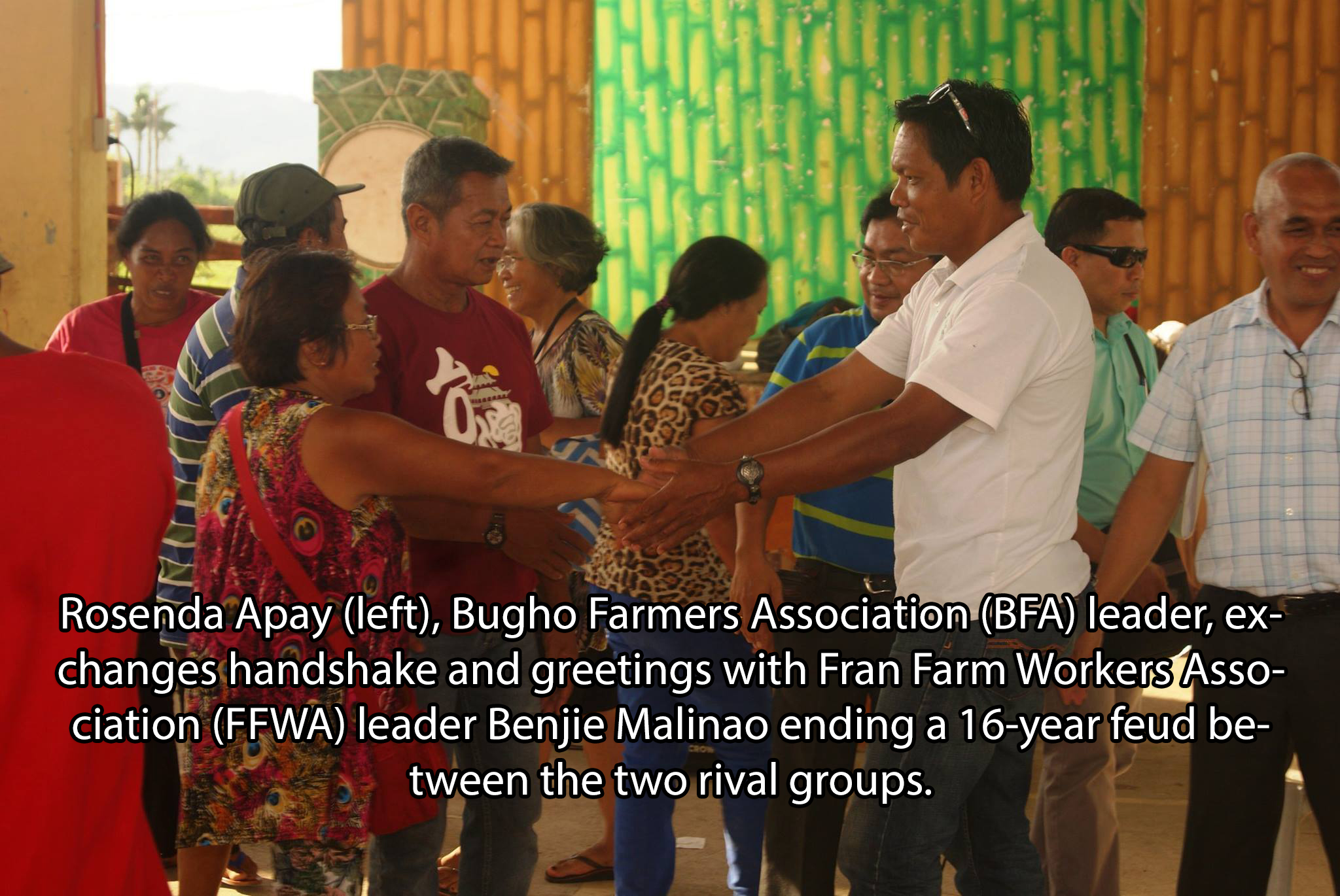 They were assisted by the City Agrarian Reform Program Officers Perpetua Sabaldan, Lucia Jara, Lea Mayote ad Nelia Santo.
For its part, the DAR will conduct delineation and subdivision survey, and facilitate the compromise agreement with the court and issue individual certificates of land ownership award (CLOAs) to the farmers.
Meanwhile, DAR opens a new chapter of hope and development to the people of Matica-a in crafting a new future as Badilla urged the farmers to take advantage of the spirit of the Christmas season in finally resolving their conflict. (JOHN COLASITO/DAR Regional Information Officer JOSE ALSMITH L. SORIA)