Story By JOSEPHINE M. MENDOZAPhotos from the Department of Public Works and Highways 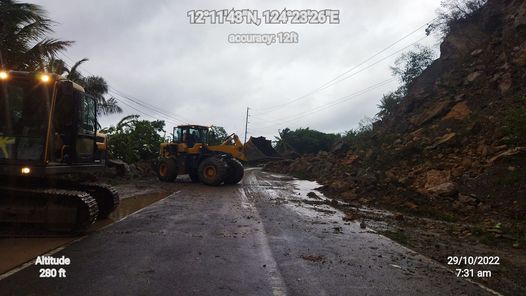 Calbayog City was made inaccessible to all types of vehicles for eight (8 hours in the wake of tropical storm “PaengPH.

A rockfall happened at around 8:30 in the evening of October 28, 2022 in Barangay Malayog, Tinambacan District at a time when Tropical Storm #PaengPH was lashing at a maximum sustained winds of 85 km/hour near the center, gustiness of up to 105 km/h and a central pressure of 990/hPa while moving west northwestward towards Albay-Sorsogon area.

Barangay Malayog is some 32 kilometers north of the city’s commercial district and the local government center. The barangay is in the way of the Allen, NortherN Samar – Calbayog City route.

The volume of the rock materials was estimated at 2,100 cubic meters. It completely blocked the width of the highway prompting the authorities to totally close the road to all types of vehicles.

The corresponding road advisory was issued by the Department of Public Works and Highways in Eastern Visayas, shortly thereafter. It included advise for vehicles to take the Catarman-Lope de Vega -Calbayog route as alternate. 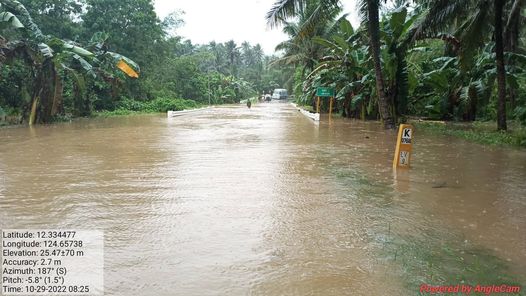 At around 11PM of the same night, the alternate route that traverses thru Lope De Vega was no longer passable due to flooding in two of the municipality’s barangays along the national highway. This happened when the center of Tropical Storm “#PaengPH” was estimated to be over the coastal waters of Rapu-Rapu, Albay while maintaining its strength.

Calbayog City was thus rendered totally inaccessible to all types of land vehicles from the northern part of Samar Island through either the Allen, Northern Samar-to-Calbayog City or Catarman-Lope De Vega – Calbayog City routes since 11PM of October 28, 2022.

Vehicles started to get thru the south, via Calbayog City, only by 7:30 in the morning of October 29, 2022, when clearing operations of the Department of Public Works and Highways (DPWH), Samar First District Engineering paved a one-lane road opening for all types of vehicles at the rockfall area, while clearing operations continue. By this time, Tropical Storm #PaengPH has already crossed the Bondoc Peninsula, in Southern Quezon after making landfall in Camarines Sur 3 hours earlier. 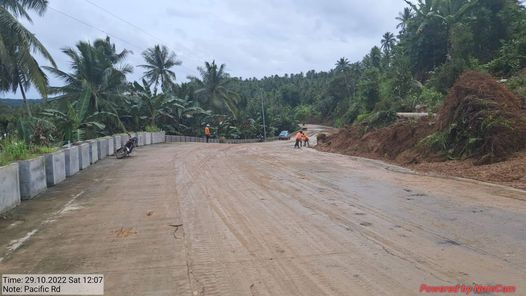 Catarman-Lope de Vega – Calbayog City-route is now open to all types of vehicles. All roads within the jurisdiction of DPWH-NSamar First District are now already passable to all sorts of land transportation.

Meanwhile, clearing operations are still on-going at the Malayog rockfall area. As of press time, 3 lanes of the road are already cleared. However, still only 1 lane is open to all types of vehicles while 2 lanes are being used for mobilization of heavy equipment while clearing operations continue.

As this story is published, Tropical Storm #PaengPH continues to move west northwestward and is about to make landfall in the vicinity of San Juan, Batangas. (CJ/jmm) 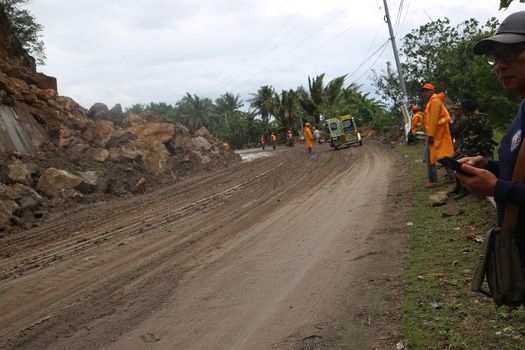