“As San Juanico Bridge illuminates, this is the symbolic signal that Spark Samar is now a burning flame that shines like a beacon of hope for the people of Samar. . . it is our turn to rise and transform” says Samar Governor Sharee Ann Tan in her message during the official switch-on ceremony of the aesthetic lights and sound on the bridge made on October 19, 2022 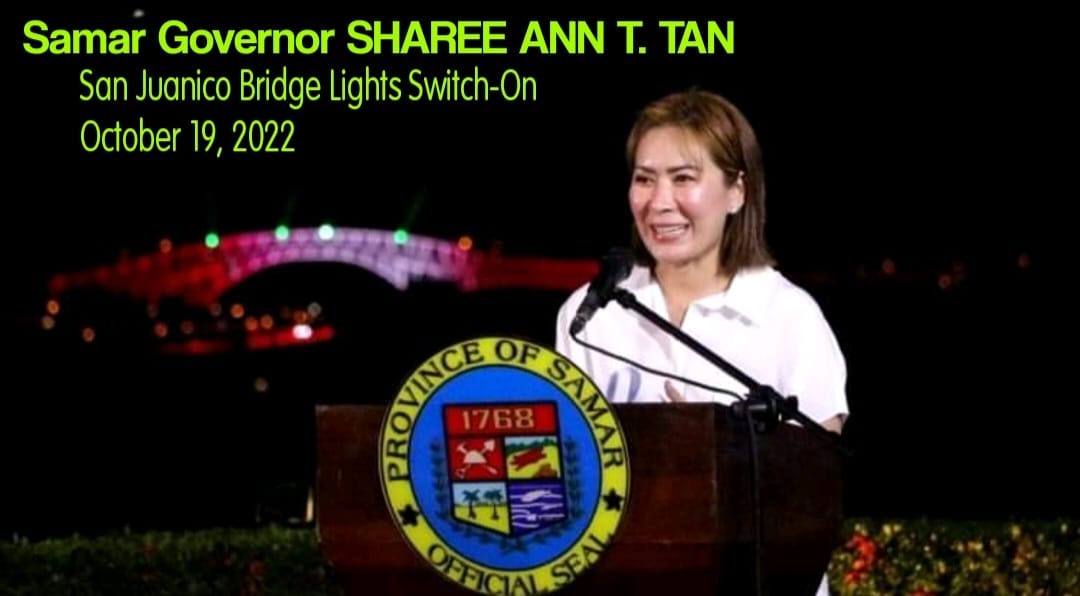 San Juanico Bridge, known as the longest bridge in the Pan-Philippine Highway, gains another record in its existence! It will also be known as the first bridge in the Philippines that displays a radiance of beauty and majesty even in the dark of night as the aesthetic lightings come to life shortly every after twilight.

President Ferdinand Marcos, Jr. led the switch-on of the aesthetic lighting system that features “a computer-controlled artistic lights and sound show with static lights and dynamic or dancing lights to emphasize the beauty of the bridge at night.”

“We are going to rewrite the San Juanico Bridge in our textbooks as the first bridge in the country to have aesthetic lighting. . .in addition to being the longest bridge along the Pan-American highway that connects Luzon to the Visayas and Mindanao,” Gov. Tan said. 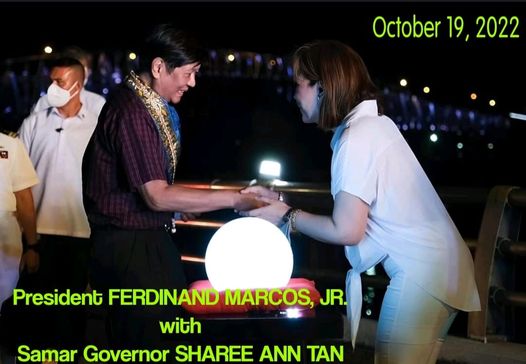 Further in her speech, Samar Governor narrated having witnessed and cheered neighboring cities and towns in the island of Leyte swiftly rising above the devastations and the rubble caused by super typhoon Yolanda (Haiyan). This speed of recovery has inspired the provincial government of Samar to do and become better development managers.
Spark San Juanico Bridge Aesthetic Lights and Sound Show is one of the projects under the Tourism Campaign Programs of the Spark Samar Development Agenda.
Anchored on the main assets of the province - tourism (destination) potentials and vast agricultural resources (land, water, and other natural resources) – as the major drivers for economic progress, Spark Samar Development Agenda was conceptualized in 2017.

In 2021, poverty incidence in Samar was recorded at an increased rate of 33.9% from 29.2% in 2018, which means that quite a proportion of the present population are poor individuals with per capita income insufficient to meet basic food and non-food needs.

To achieve development goals in attaining community transformation and economic prosperity for the people of Samar, Governor Tan recounted to have started fixing from within by taking a deep dive into what the province is all about until Samar is now ready to offer and share its abundance and intensity of beauty with the rest of the country and the whole world. 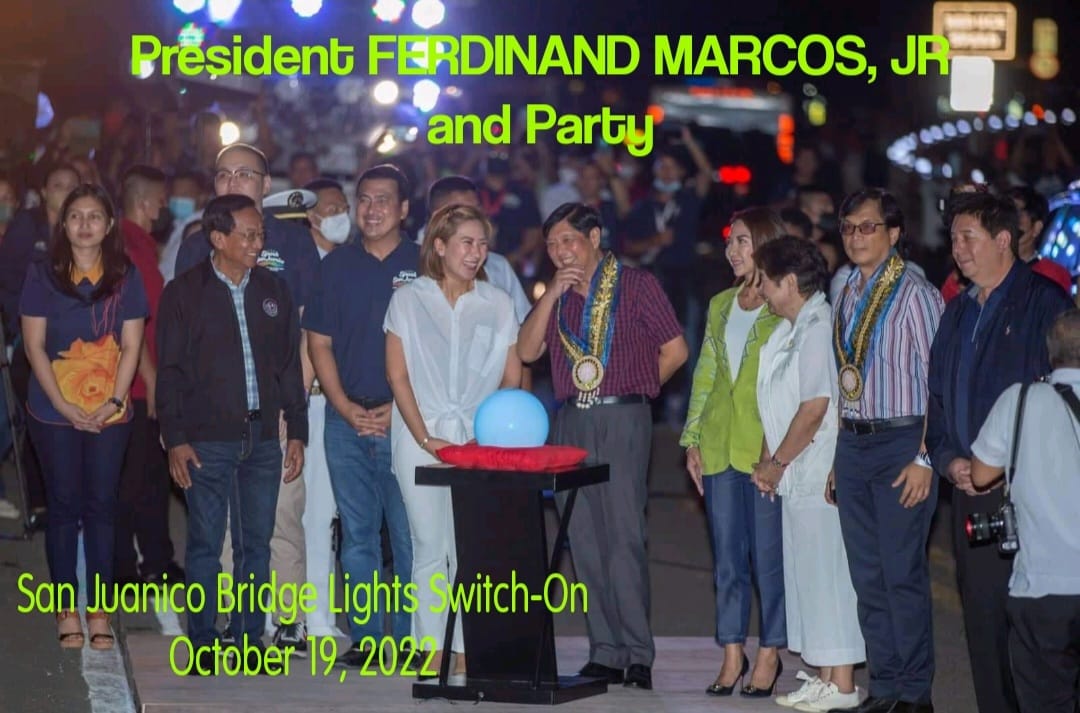 San Juanico Bridge Lights is seen to draw a fraction from the number of tourism arrivals in the country hitting a high of 1.7 million as of October 17, 2022 – a number exceeding the target for the entire year, as announced by Tourism Secretary Maria Esperanza Christina Frasco.

With Samar’s breathtaking sites, mysterious caves, delectable cuisine, the rich culture and the beautiful passionate people, Samar Governor, in her speech, also invited the Filipino people and the rest of the world to explore Samar and immerse as well as invest in the growing cities and emerging towns.

San Juanico Bridge now becomes the "Bridge of Love and Hope" for Leyteños and Samareños. The light shows on the bridge is believed to enhance tourism arrivals in Samar, given the potentials of tourism destinations that the province is endowed.

“As San Juanico Bridge illuminates, this is the symbolic signal that Spark Samar is now a burning flame that shines like a beacon of hope for the people of Samar. . . it is our turn to rise and transform” says Samar Governor Sharee Ann Tan in her message during the official switch-on ceremony of the aesthetic lights and sound on the bridge made on October 19, 2022

“When the lights of San Juanico Bridge start to shine. . .remember me as I say: IT’S TIME FOR SAMAR! AN SAMAR NAMAN, Governor Tan concluded.(CJ/jmm) 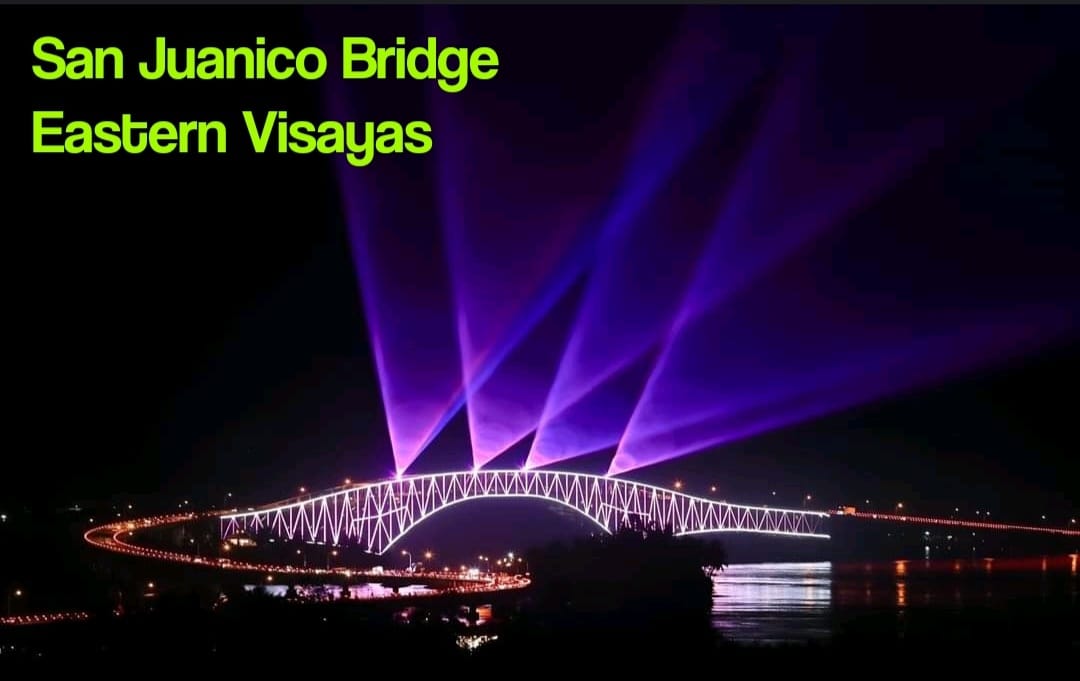