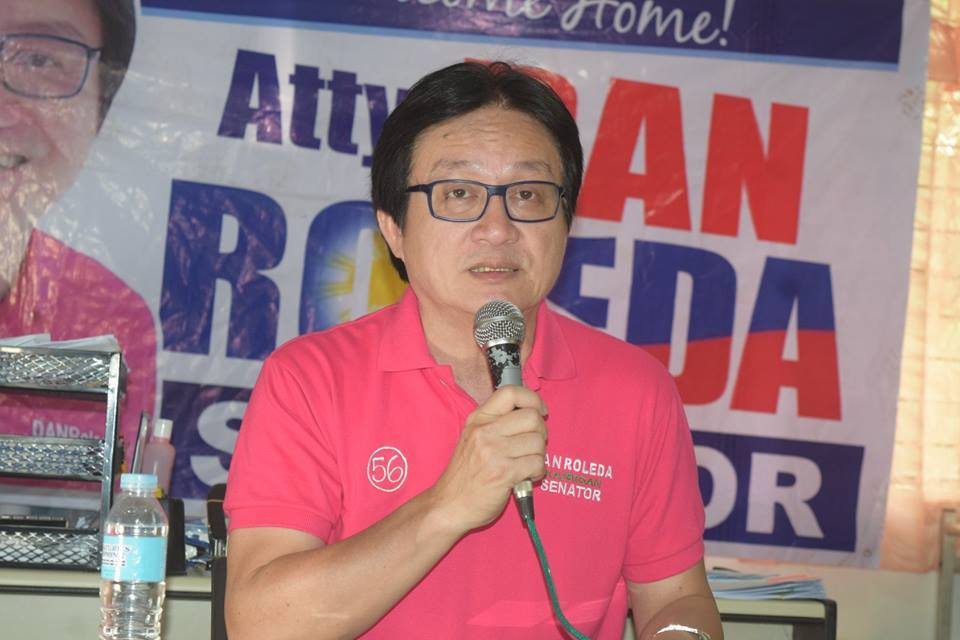 "Kaibigan Dan" to many, Atty. Roleda is a Calbayognon, who in a press conference held in the city on February 26, 2019, outlined his 5 programs that primarily seek to improve the lives of every Filipino family:

1. A bill which would simplify the process in accessing livelihood programs, particularly by cooperatives in the marginalized sectors,

2. Decent housing programs by expanding the programs of the government thru National Housing Authority to the local government level,

3. Better Health Services by reviving the medical internship program for doctors, nurses and midwives to serve in rural areas, and for Barangay Health Workers to check and monitor regularly the health status of the people in the barangay,

4. Stronger basic education foundation by integrating the Day Care Center Program into the Department of Education (DepEd), and ;

5. Better distribution and access to food and farm programs by ensuring that farm produce could easily reach the consumers by doing away with middle men, more farm-to-market roads and a ready market for the produce. 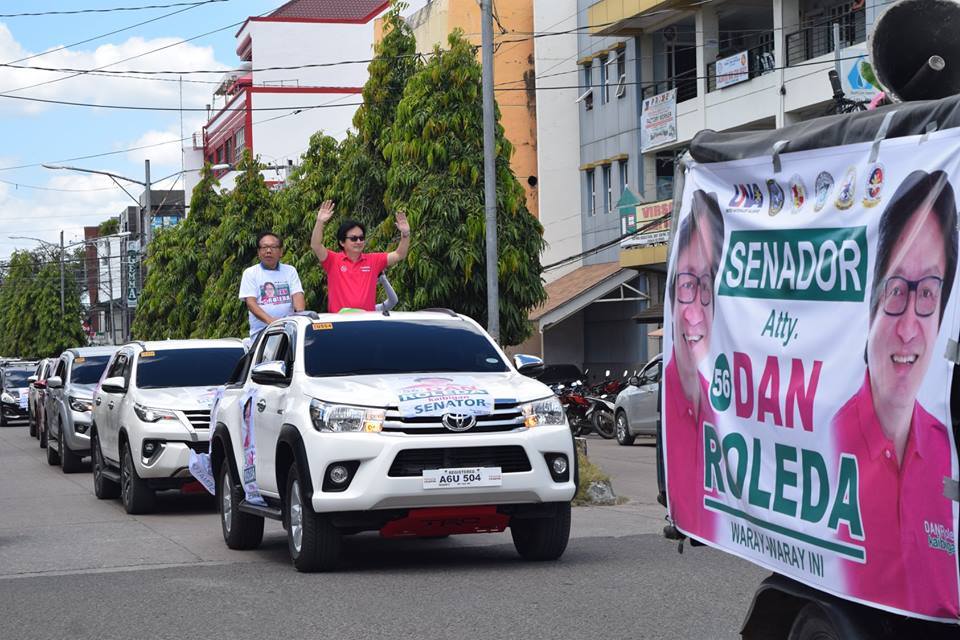 Atty. Danilo "Dan" Roleda roams around Calbayog City during the motorcade on February 26, 2019.
Roleda also stressed the importance of having a senator who will represent Region 8 (Samar, Leyte and Biliran) after 65 years. Although the region has already produced 3 senators- Francisco Enage of Tacloban in 1929, Jose Avelino and Decoroso Rosales, both Calbayognons in 1951 and 1955 respectively, it is now high time for the people of Eastern Visayas to have another senator and Roleda assures the people of his service once given the trust to sit in the senate.

“Stop voting for Barabbas,” Roleda also pleads to the voters.

According to biblical accounts, Barabbas was a “notorious prisoner” whom the crowd chose over Jesus of Nazareth to be released from Roman Custody, and the latter to be crucified. This, says Roleda, was the first election, where Jesus of Nazareth, whose good deeds and miracles performed were all hailed by those who witnessed it, but the crowd still “voted” and chose Barabbas who has “backers” from the higher echelons of power. 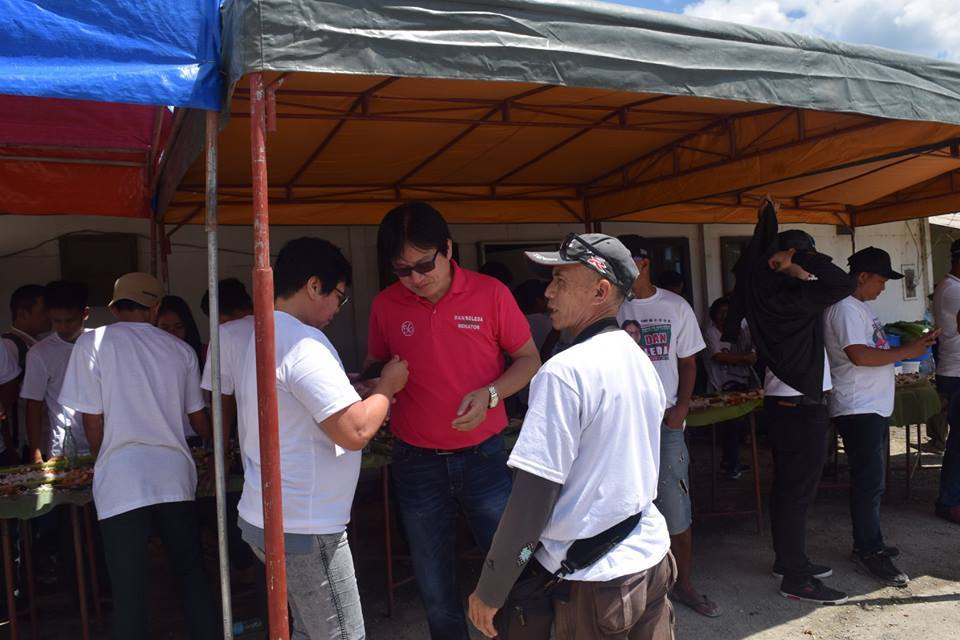 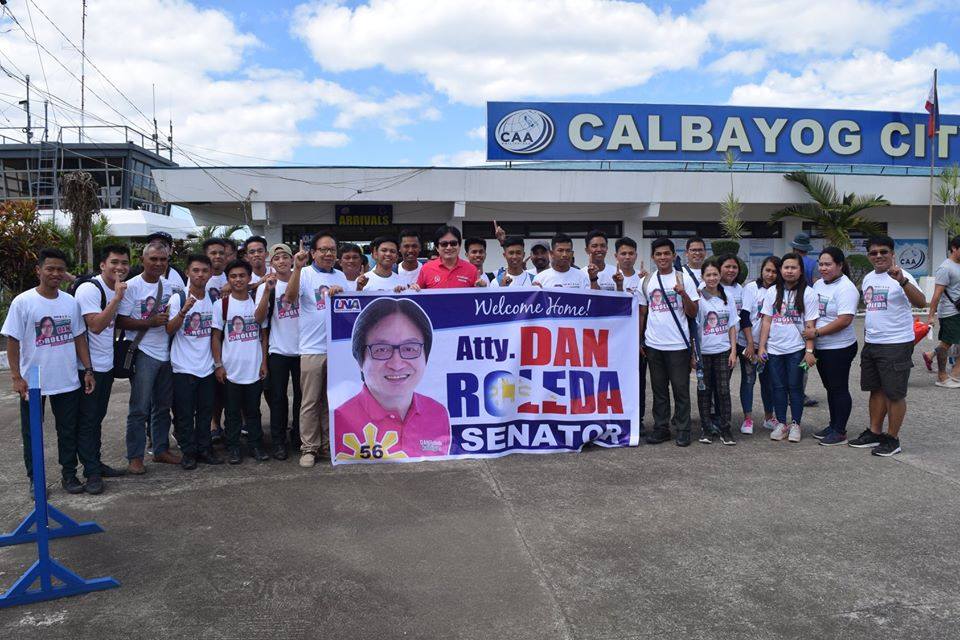 At Calbayog City Airport during his arrival, Atty. Dan Roleda poses with the engineering scholars who gave him a warm welcome.
Though appreciative of the younger Duterte’s endorsement, Roleda says that he remains with the United Nationalist Alliance (UNA), together with Senator Nancy Binay, and chose to participate in debates and interviews and presenting to people directly his stand on various issues.

In times when he and the other candidates have a chance to be together on stage during campaign sorties, Roleda says that he always asks to be the last speaker, because once he speaks ahead of the rest and tells the story about Jesus and Barabbas, some candidates get offended by him.