SHOULD THE CATHOLIC CHURCH UNSHEATHE? A SAMAR PARISH PRIEST HAS SHOWN THE WAY

(Originally posted on March 9, 2019 at the author's Blog at ABS-CBN website - https://news.abs-cbn.com/…/should-the-catholic-church-unshe… 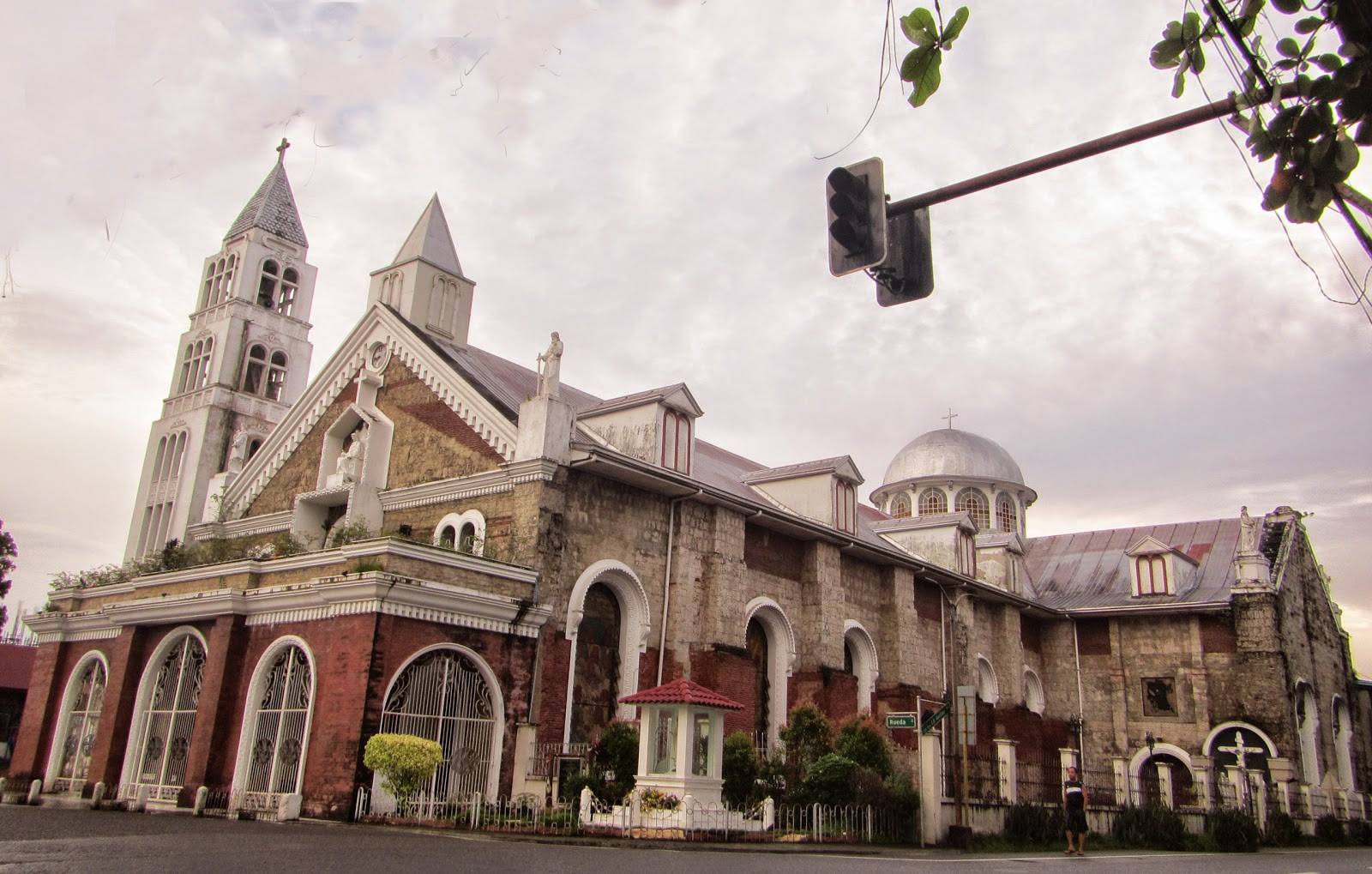 Sts. Peter & Paul Cathedral of Calbayog City. It is one of the oldest church in the Philippines.
Let me commence with what I hold to be my accepted verities. It is also my fervent wish that you accept them as well, thank you.

Make no bones about it. Churches, mosques and temples of all religions and their priests, imams, rabbis, pastors and preachers, as citizens, each and collectively, own the protected and inalienable constitutional right to free speech in a functioning democracy. In fact, the human right to espouse and fight for what is morally and ethically right.

Social issues, morals and ethics of human behavior, when totally divorced from and shorn completely of any partisan shades or entanglements, naturally belong to the apostolate of any church in instructing and directing the observances and practices of their religious faithful. Church and religion exist as the source of moral and ethical guidance alongside existing civil and criminal laws of the land, albeit even if only in supporting a public life subsidiary role.

When a nation’s very governance itself becomes a moral and social issue, it becomes perforce the obligation of the church to express its public participation in the conduct of her guidance and counselling over what is perceived and accepted as “the right thing to do.” The moral and ethical well-being of communities is church turf.

Who is to argue that the Duterte administration has not descended into a moral morass? By words and deeds, has not the President flagrantly displayed himself to be the national moral issue?

Might all the Duterte bluster and blasphemy against the Catholic Church and her bishops and priests partake of his sinister effort to intimidate and silence the Church and her stalwarts from participating in the non-partisan exercise of their inalienable rights?

And how has the Catholic Church, thus far, behaved and reacted? Would you say, lame? Inutile? Answer me this, then. Has the church proven ineffectual in preventing public and political malevolence?

The forthcoming May elections bring forth before the Filipino electorate an event, an opportunity of singular political significance. Never before have we ever had senatorial slates touting characters of unquestionably questionable repute! When was it ever, the electorate being baited, cajoled and bribed into voting in candidates with pending criminal cases? With individuals accused of very serious felonies, specifically “plunder” as defined by Philippine law? Comebacking overweeningly ambitious politicians with feckless and mediocre performance records; in fact, some with none at all? And those with shoddy and selfish, lip-service commitments to genuine public concerns? What about those who are unashamedly pawns and puppets?

This particular election presents the people with a clear moral issue. Good versus evil! Must the faithful, we the very flock, allow our church to be absent from the town square, to take an undeserved sabbatical? I think not. The church must unsheathe! She is being bullied and wounded. She must therefore engage and fight back! The flock awaits! 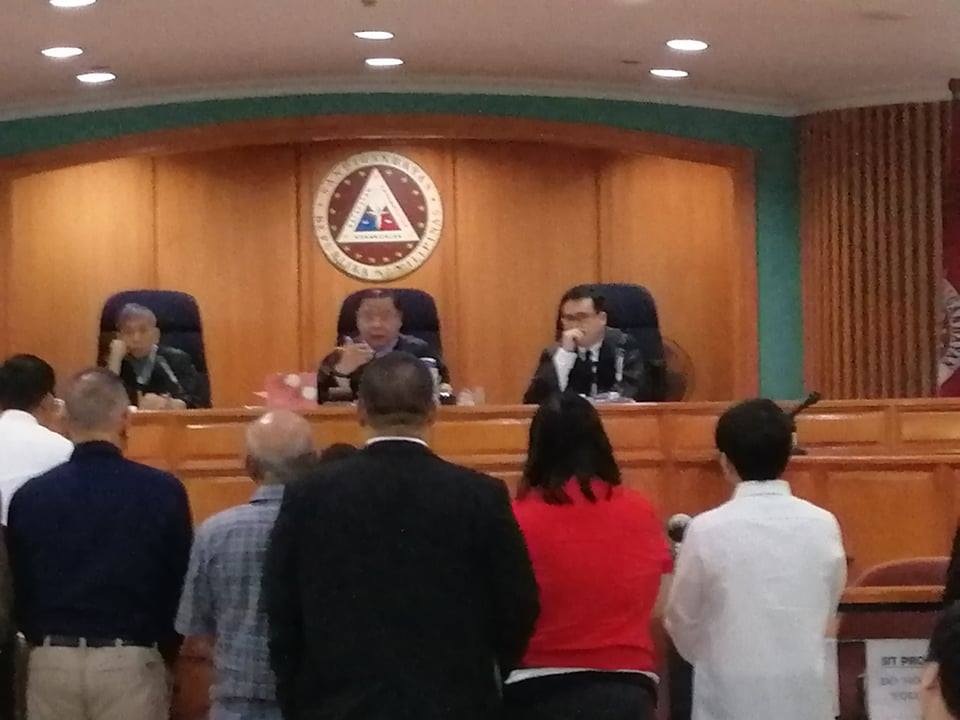 This photo was taken during the promulgation of the Decision unanimously made by the three(3) Justices in the Sandiganbayan on March 01, 2019 against Samar Second District Congressman Milagrosa Tan (in red upper garment) who was found GUILTY (along with two others) for EIGHT COUNTS OF GRAFT and CORRUPTION.
”ISOG HAN SAMAR MOVEMENT”

A parish priest has already shown the way, a sterling template for community action. “Isog han Samar Movement.” Its founding leader, Fr. Noel C. Labendia, a parish priest of the Diocese of Calbayog, uses the more profoundly eloquent “fury” as his preferred translation of the word “isog” over the ordinary and simple “anger.” “The Fury of Samar Movement,” then. Fury is the apparent measure of fervor animating this anti-corruption lay group based in Samar’s capital, Catbalogan. By having initiated and having won a case that has become a local sensation, “Isog Han Samar Movement” is now primed for emulation. It will even be replete with greater resonant significance if her advocacy were to inspire other similarly affected communities. Verily, much of the entire country!

Samar Congresswoman Milagrosa T. Tan (2nd Dist.) was finally convicted of graft by the 4th Division of the Sandiganbayan in a unanimous decision announced last Friday, March 1, 2019. She was found guilty beyond reasonable doubt and sentenced to a minimum of 62 years up to a maximum of 115 years over eight criminal counts under the Anti-Graft and Corrupt Practices law, with perpetual disqualification from holding public office. She was sentenced along with 4 other co-accused local officials. The final amount involved was PhP16+ million. (For facts of the case you may Google search G.R. No. 185954.) They are all out on bail presently while their cases are on appeal.

The Commission on Audit (COA), in an August 2004 investigation, found that then Gov. Mila Tan and some other local officials of Samar Province had engaged in various purchases originally amounting to PhP 29.34 million, without proper bidding procedures and documentation. These were substantially overpriced purchases of rice, medicine, cement, electric fans and other supplies intended as relief for the victims of Typhoon Kidang which struck Samar in 2001. 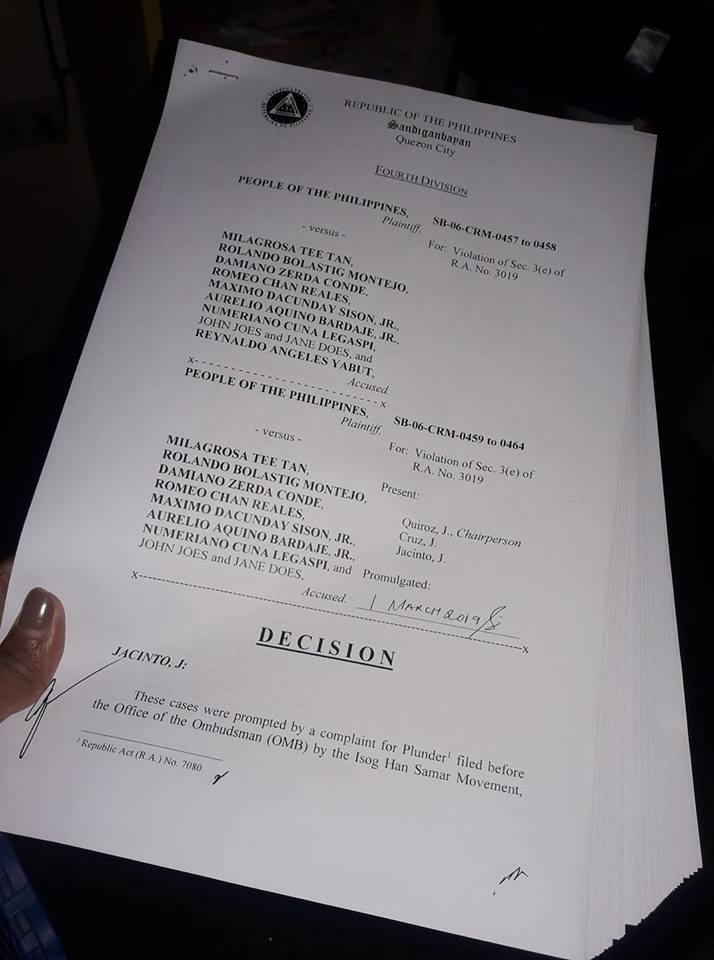 The photo shows the 57-page Decision of the Sandiganbayan containing the conviction of Samar Second District Congressman Milagrosa Tan.
Forthwith, as “lead complainant” in representation of “Isog,” Fr. Labendia filed the case with the Ombudsman. This was in October 11, 2004. It took almost 15 years for the civic vigilance of the Samar folks to bear fruit.

The notorious Mila Tan is on her third and last term as congresswoman but is running for governor again, a post she occupied for nine years until 2010, when her daughter, Sharee Ann, ran and won as governor, in substitution. Sharee Ann will be running for Samar’s 2nd District congressional representation, thus swapping positions again. Meanwhile a son, Stephen James, who is currently vice governor, will run for Congress in the 1st District. Another son, Michael, will vie for the vice-governorship. A daughter-in-law is suspended Catbalogan City Mayor, Stephanie Uy-Tan. During the last two elections, Mila’s oldest daughter, Angelie, ran unsuccessfully for mayor of Calbayog. In the May elections, there are four Tan family members running in Samar.

I have not yet been able to verify reports that no one in the Tan dynasty is originally from Samar. If that were so, that could only mean that my complicit comprovincianos, in the past, have accommodated carpetbaggers.The Tan family business sprang from ‘merchandising’ and ‘microlending,’ today’s euphemism for legalized usury. The Tan clan/dynasty of Samar is an interesting Philippine political phenomenon. (For those who might have the interest and the time, here are some references: https://www.rappler.com/…/27089-the-tans-of-samar-expanding… and https://www.pna.gov.ph/articles/1051522).

It is an accepted truism that in Philippine politics, there is no such thing as a solid Catholic vote. Thus far, perhaps. The only valid explanation is that the overwhelming preponderance of candidates are Catholics, regardless of political affiliation. Therefore and naturally, statistically a much scattered allocation of votes ensues diffusing coveted electoral solidity. On the other hand, never have we ever had a moral choice facing the electorate, because never has Catholicism and Catholics ever been so brazenly and frontally abused and assaulted as we have been under the Duterte dispensation.

If the church can come out and do public battle against the passage of Reproductive Health Act of 2012, why can she not come out swinging, at the very least, on who NOT to vote for? In truth, why not endorse, campaign and declare what is an obviously moral choice?

Beyond argument, the anti-Duterte opposition team—“Otso Diretso”---individually as well as a ticket, possesses personal attainments and credentials such as academic, professional stature, experience, character, family life, advocacies, and other quantifiables vastly superior to all others. They all stand out, each truly deserving to be voted senator of the Republic. “Otso Diretso,” inarguably, is a moral choice. Why not an outright open, actively recommended preference for eight in a field of twelve?

If a parish priest from a diocese, far removed from the metropole, can summon the courageous rectitude and rally his community to fight public malevolence, might the eminences and excellencies of the hierarchy's conference not mount a justifiably open defensive assault?

The gauntlet thrown down by Duterte must be picked up. The very existence of democracy in the Philippines very well rests upon the fortitude of the Church.


ABOUT THE AUTHOR: Tomas 'Buddy' Gomez III began his professional media career in ABS-CBN's (previously Chronicle Broadcasting Network) DZQL-Radio Reloj in 1957, after which he spent 25 years with the Ayala Group.
-In 1986, the then Pres. Cory Aquino appointed him Consul General to Hawaii and later served as her Press Secretary.
-During the Ramos administration, he was chairman and president of state-owned IBC-13 Network.
-After government service, he became an ‘OFW’ in the U.S., working as front-desk clerk and then assistant general manager of a hotel. He also worked as a furniture and antique restoration specialist.
-He is now retired and lives in San Antonio, Texas.
-His e-mail is: t.gomez@live.com

Disclaimer: The views in this blog are those of the blogger and do not necessarily reflect the views of ABS-CBN Corp.