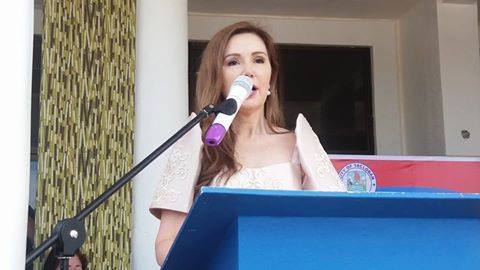 Tacloban City - More jobs, improved traffic system and provide basic services like health and education are the to-do-list for the first 100 days of, actress-turned-politician, Cristina Gonzales-Romualdez of this city.

Mayor Romualdez, who assumed the post formerly occupied by her husband, Alfred Romualdez for nine years, said, she hopes to see in the next three years a better Tacloban which is still feeling the impacts of Supertyphoon `Yolanda’ that battered the city in 2013.

Among these priorities include creating jobs, boost income among families, move economy from consumption to investment and building a disaster preparedness plan for the entire city against any form of calamity.

The investment in Romualdez economic plan embraces priorities that will raise the living standards of Taclobanons and profit of workers as well as businesses for long term; rebuilding the city’s infrastructure, committing resources and giving attention to the education and training needs of the students and workers.

`We must have something to show for our money, more jobs, better educated people, and a health care system that works,’ Romualdez said.
She is as well committed to strengthen security and tourism of the city.

According to Romualdez, security will always be on her agenda and road safety as these are major concerns of the public.

She is also open to put up a 911 response center in the city to help fight criminality and provide a more efficient emergency response especially in times of calamities.

"We need to work intensively regarding traffic. We will renew the traffic light system in the city, fix the sidewalks and install street lights in different areas and put up surveillance cameras on the streets to deter crimes,’ she added.

She will also work for deployment of additional police men in the city to ensure public safety.

Moreover, Romualdez think tourism also is one the most important industry and is linked to everything else.

According to her, safer communities will attract more tourists that will bring more investment opportunities.
"The test of this plan cannot be what is in it for me, it has got to be what is in it for us. If we work hard together, if we rededicate ourselves to creating jobs, to strengthening our families, to reinventing our government, then we can lift our city’s fortune again," she concluded. (CJ/JAZMIN BONIFACIO)
,