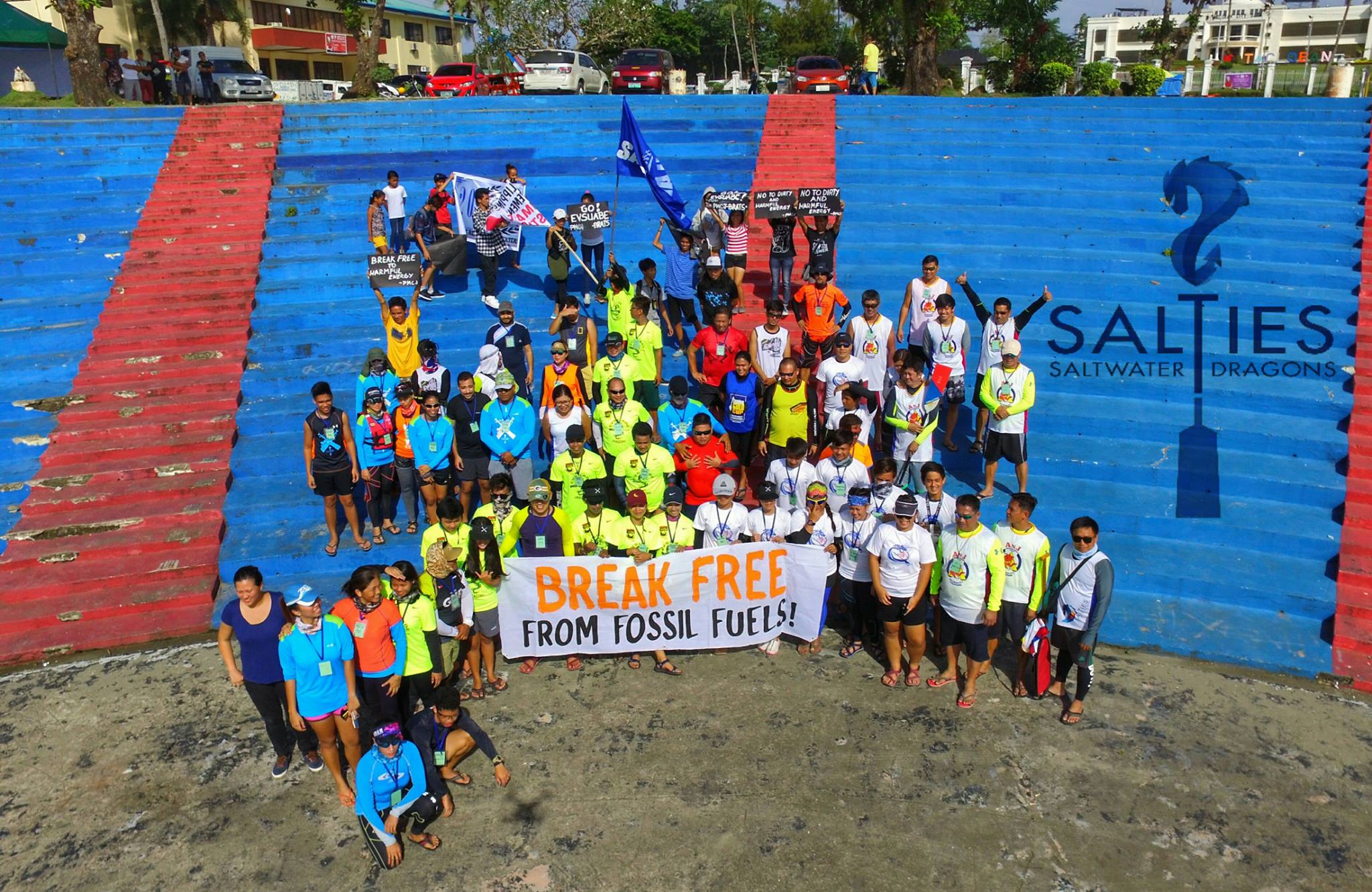 TACLOBAN CITY – They come from different walks of life – mothers, students, teachers, government workers, entrepreneurs, bikers, nature lovers, migrant workers and conservationists – bonded by a common desire, to overcome their fear of the sea after their horrendous experience during typhoon Yolanda.

Before sun rises each day, you see them in two boats racing against each other on the serene waters of Cancabato Bay. There are no drums for the cadence, instead the assigned head shouts the count for a synchronized paddling. They appear fierce and fearless on the water, somewhat opposite from how they were over a year ago.

But as the race gets more intense, the sun slowly appears from the east to signal that it is time for them to pack up and prepare for their normal daily grind. The training resumes late in the afternoon when the students are out from school and office hours are over.

The group was organized primarily to help locals cope with lingering trauma and phobia of the sea after experiencing the most destructive waves and storm surges to hit a populated land mass in recent years.

It is also an advocacy group that reminds everybody that climate change matters to our survival as a race and immediate actions need to be done before another disaster of typhoon Yolanda magnitude strikes again.

“We introduced dragon boating as a way of bringing back their trust for the sea. Most of our members were victims of Yolanda and they have been harboring trauma and anger towards the sea,” says Teody Muñoz, a self-confessed avid lover of the sea and co-founder of Tacloban Salties. 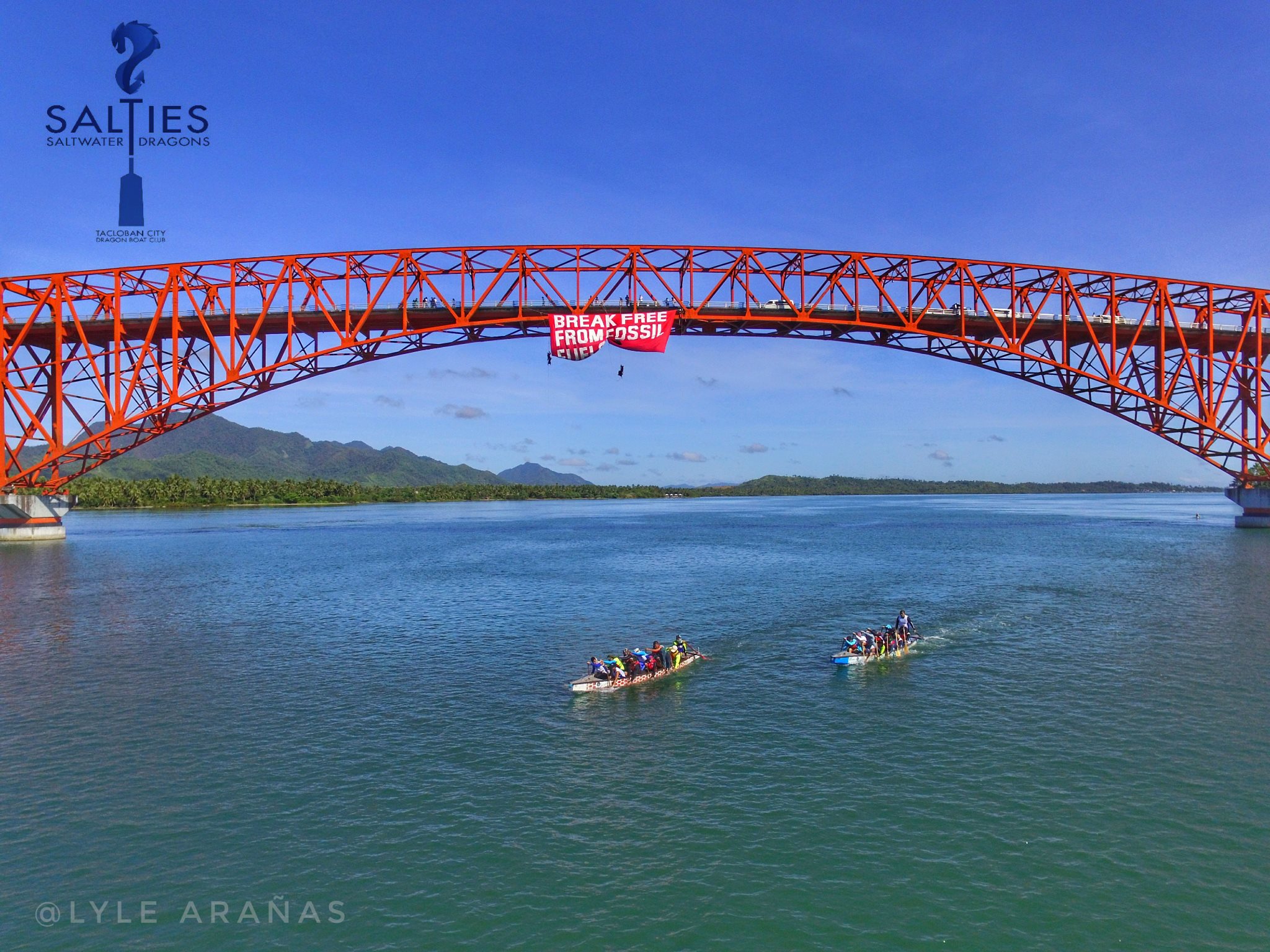 For a 14-year old BMX enthusiast Lyle Jay Arañas, his exposure to dragon boat has brought back his confidence of Tacloban’s Cancabato Bay. “Before I took up Dragon Boat I fear the sea thinking that the water might suddenly rise again,” he said.

Arañas, who is an eighth-grader and the youngest member of Tacloban Salties, lost 16 friends to typhoon Yolanda, many of them were neighbors in Fatima Village.

“I slowly overcome my trauma and I am now encouraging my classmates to join our team as well,” he said. “I can now say that Dragon Boat and all water sports are safe.”

Tacloban Salties trainer Archie Sumalindao finds it challenging to introduce newbies to Dragon Boat especially those who experienced trauma during the super typhoon. He said the key is to gradually introduce them to the water in a relaxed and fun way.

Sumalindao, a veteran dragon boat paddler from Agusan City, works as a librarian at the Regional Trial Court. He chanced upon the Tacloban Salties while riding on a multicab on his way to work.

“To make it comfortable especially for those with trauma, we just let them enjoy what they are doing. We only try to absorb their issues and encourage them to express what they have in mind,” Sumalindao said.

“Newbies would usually ask “kung hindi ba nakakatakot” (if it is not fearsome) because of what they experienced during Yolanda,” he said. They would just usually stay on the shallow part of the sea.

“Hindi namin sila pinipilit na sumakay” (We don’t compel them to ride) but we would ask them to try. They are briefed on what to do to make the boat ride safe and all paddlers are required to wear a life vest,” he said.

For the 35-year old Shakkalissa Cañas Henderson, an overseas Filipino worker, paddling with the Tacloban Salties is her way of coping up from depression. She lost both her parents and a younger sister to Yolanda.

“If I stay in the house I will only get depressed,” she said. “I avoid looking at the pictures of my family because it always makes me cry.”

Her doctor suggested that she engage in sports and extreme activities to get her busy and divert her attention prompting her to enroll in Muay Thai and Dragon Boat. “I gave up Muay Thai because my body cannot handle two extremely taxing physical activities. I preferred Dragon Boat because I enjoy it here. We work as a team and we bond like a family. This is really enjoyable.”

Henderson said she is not angry with what happened because it was a natural disaster but said that everybody must do their share to protect the environment to avoid a recurrence of similar typhoon. 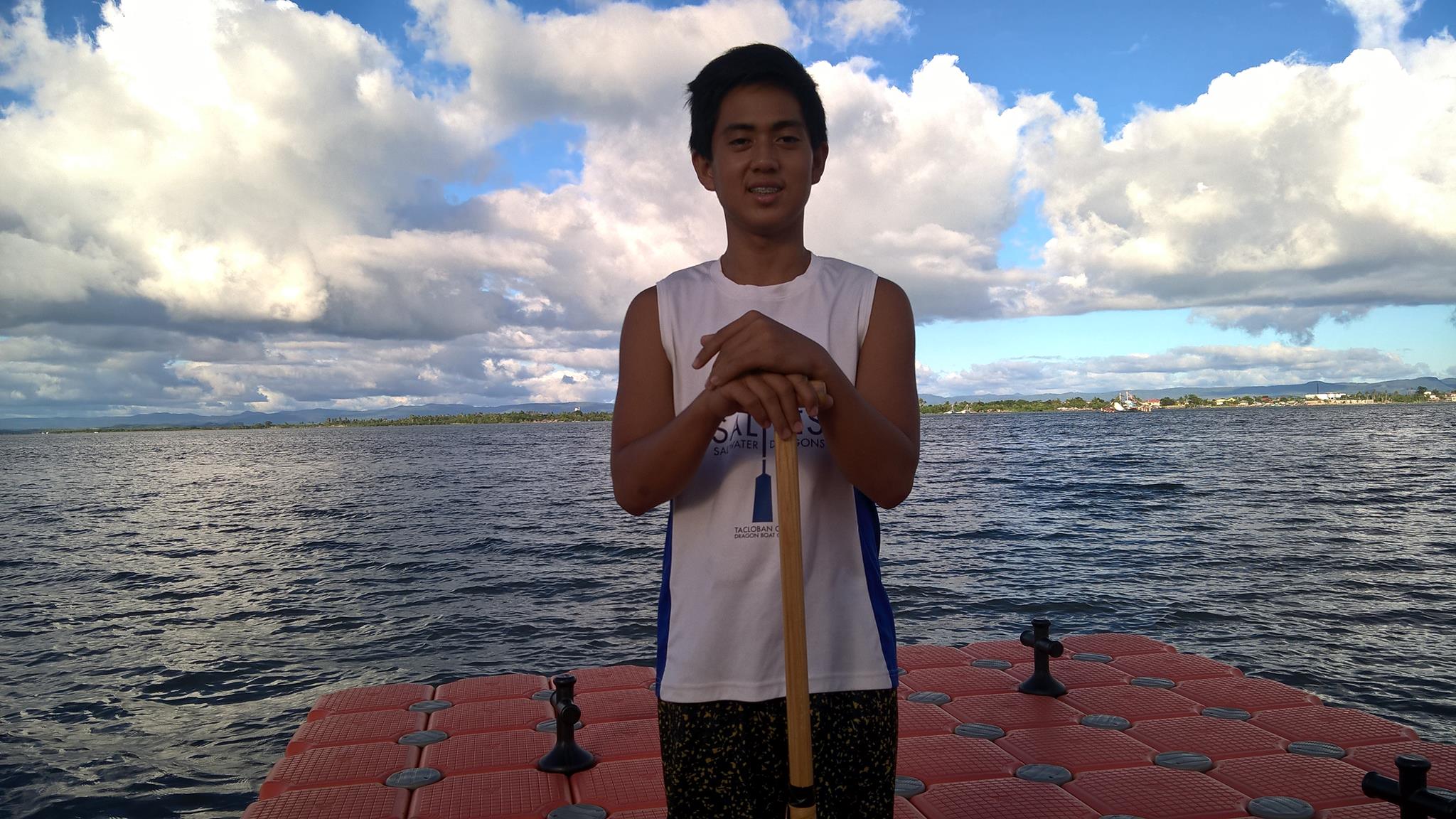 Tacloban’s exposure to Dragon Boat started in 2009 when then Leyte Governor Jericho Petilla included a Dragon Boat race as a sidelight in the hosting of Palarong Pambansa. Paddlers from the Philippine National Team participated regaling locals on the beauty of the water sports.

Dragon boat clinics were held participated mostly by students to encourage them into taking the sport but the interest was not sustained.

“Parang pinatikim lang ng paddle,” (It seems like just made to try the paddle) comments Muñoz since the visitors brought home with them the boats they used. “Ang mahal kasi ng boat.” (Because the boat is expensive.)

Before typhoon Yolanda hit the city, there was already a brewing new interest of promoting dragon boat after a local craftsman and businessman, Abraham Mario Wenceslao II, completed two 10-man boats, with funding assistance from a good friend. He had started working on these boats before Typhoon Yolanda. After the typhoon, Wenceslao thought of using the boat to help people develop survival skills on water and overcome their fear of the sea.

“The club aims to foster passion and interest in rowing through education and training, promote water safety and advocate environmental and ecological awareness among its members and in the community,” states the club’s page in a social media.

While the team is relatively young compared to other Dragon Boat teams in the country, it is already displaying so much promise.

Last year, the group was able to participate in different competitions including the 2016 Asian Dragon Boat Championships in Palawan where it took home a silver and two bronze medals.

Muñoz said they reached the semifinals in all events they participated and came home ninth overall out of 36 teams from nine countries. Tacloban Salties targets to surpass this achievement when it competes in the Cebu Dragon Boat Fiesta 2017 on April 28 - April 30.

Individually, many of its members are already getting noticed for their skills like in the case of 14-year old Lyle Jay Arañas who is being offered by a veteran team in international competitions to join their pool, an offer that the kid would like to entertain. This is also evident by the mature leadership he shows especially to the new members of the organization.

CAMPAIGNERS FOR THE ENVIRONMENT

Tacloban Salties stands out among other local sports club for their consistent advocacy for climate change awareness in all their races.

“‘We paddle for climate change awareness,” proclaims Sumalindao of their club’s motto. “We are not confrontational in our advocacy, we do not target individuals. We just display our banners for the people to know what we stand for.” 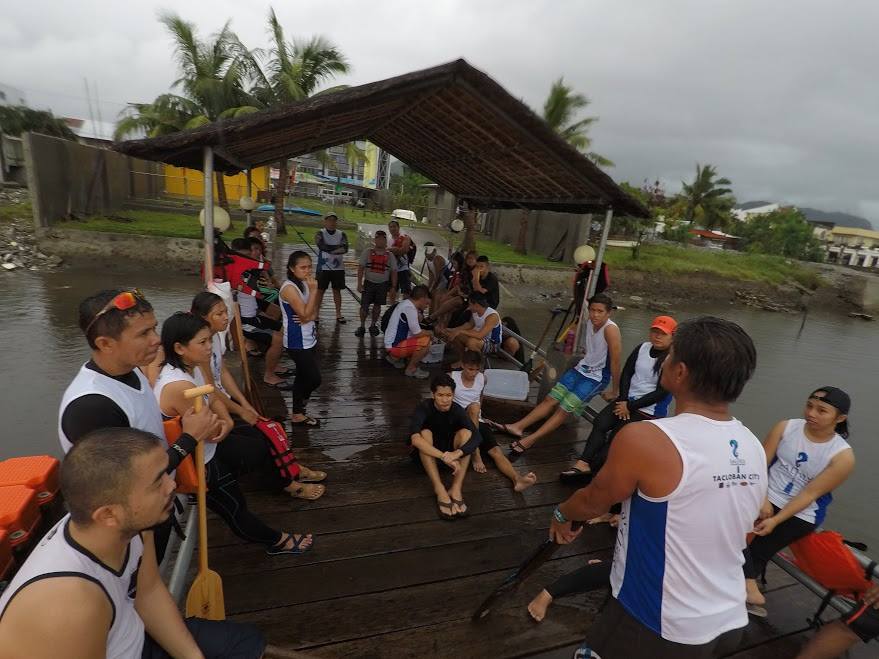 He said that from the start it was already clear to the members what the group advocates. “Mas maganda ang may advocacy kasi hindi lang katawan ang binuhay mo kundi ang puso,” (It is better to have an advocacy because, aside from making the body live, you also include the heart) he said.

Muñoz, on the other hand, believes that their advocacy is what binds the group deeper into their commitment to the team especially that the issue on climate change is near the hearts of Taclobanon.

“Tayo ang biktima ng Yolanda. Tayo ang biktima ng grabeng kalamidad dala ng climate change (We are victims of Yolanda/Haiyan. We are the victims of the worst calamity brought about by climate change). Our battle cry is we paddle so people will be aware to protect the environment. Let’s get out and break free from the use of fossil fuel,” Muñoz said.

The club takes the issue seriously. During their daily practice, the group would pick up garbage - mostly plastics - that they would find on the bay. They also do coastal clean-ups to celebrate some milestones.

If dragons are considered guardians of treasures in some mythical literature, Sumalindao said, “Tacloban Salties can be considered as dragons of Cancabato Bay.”

“We consider Cancabato Bay as a treasure. We like to think that we are the guardians of Cancabato Bay,” he said. “We try to save this. We dream that someday there will be no more illegal fishing here and this place be declared as a marine sanctuary. It will take years before this happens but hopefully it will come true.” 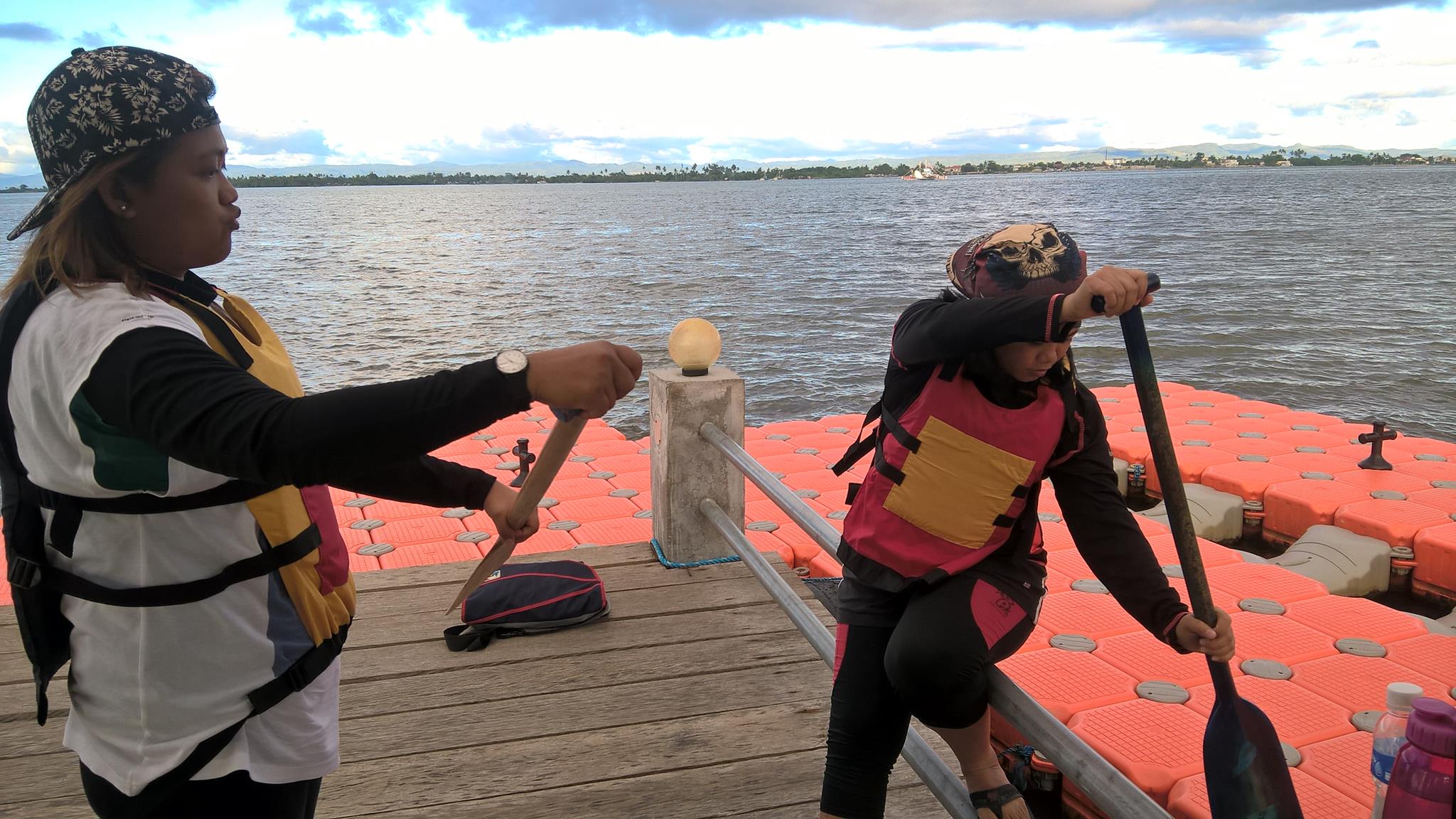 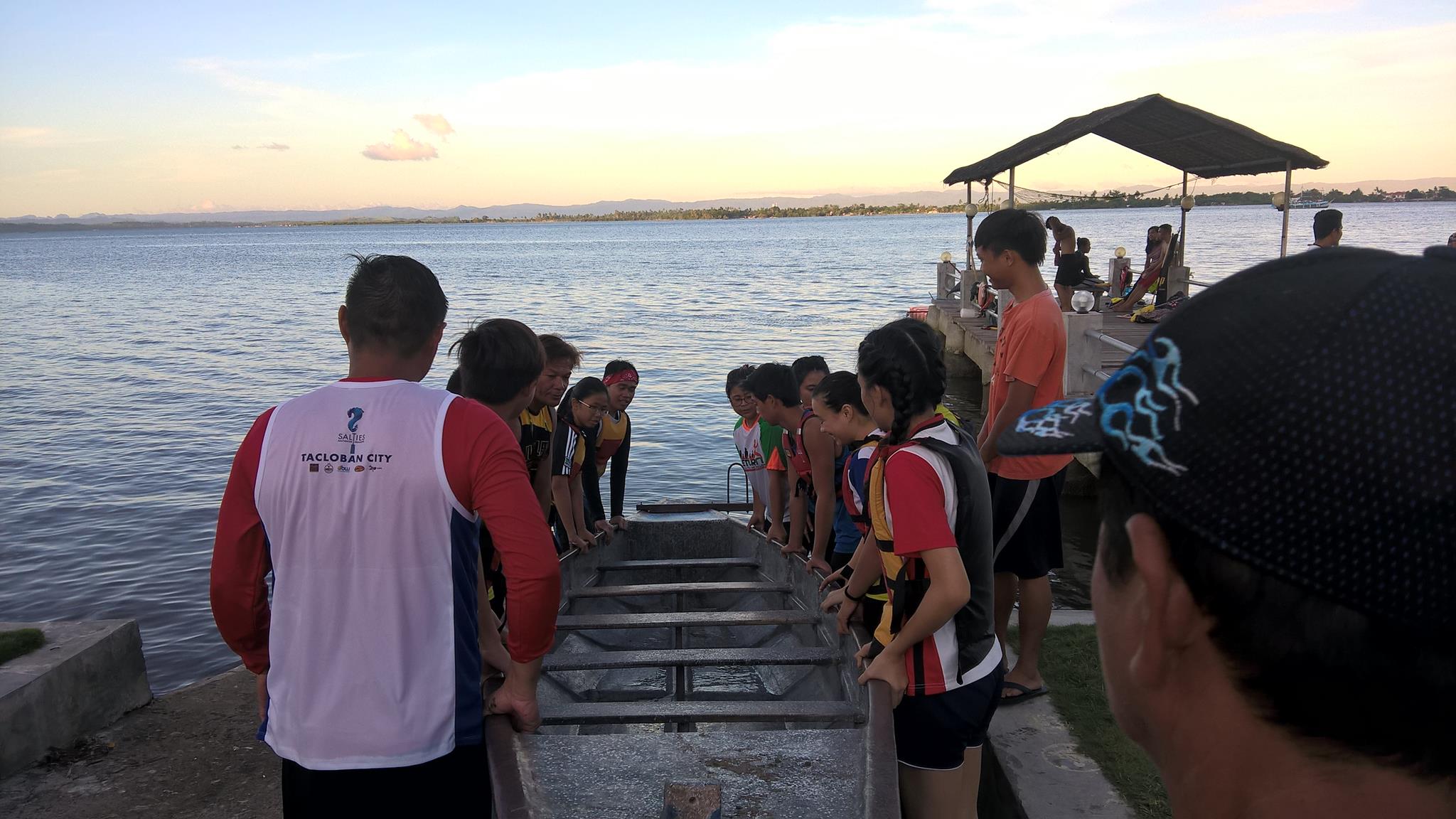