THE CITY MOURNS FOR THE LOSS OF ENGR. JOKER SERRANO 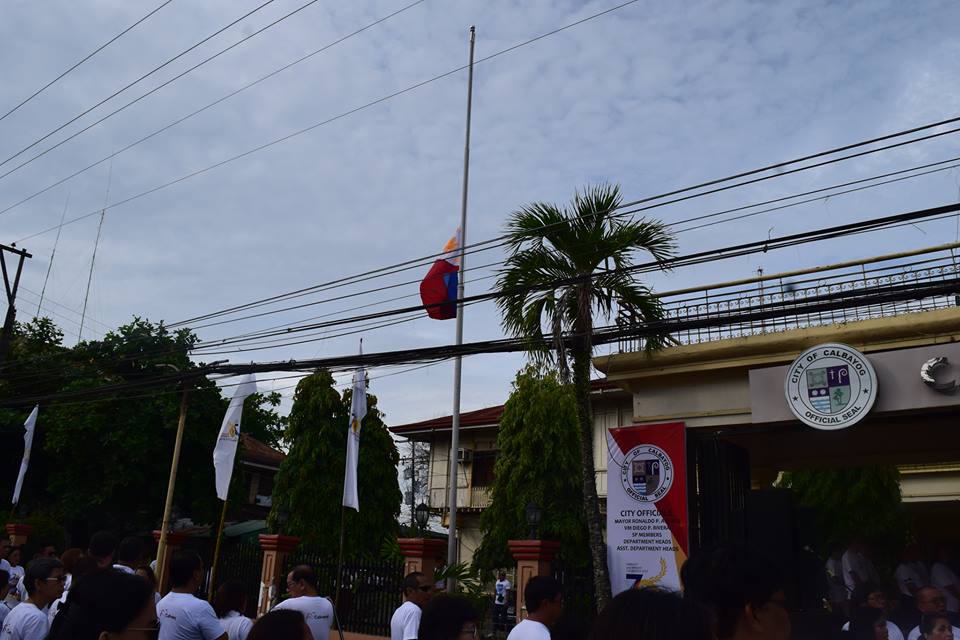 The Philippine flag is flown half-mast on the pole at the City Hall Grounds in grief and in mourning for the death of Engr. Rafaelito "Joker" Serrano.
CALBAYOG CITY – The Philippine Flag on the pole of the city hall grounds is flown at half-mast in mourning the death of Assistant City Engineer Rafaelito “Joker” Serrano who was shot at short range while he was on his way to work driving his motor bicycle in the morning of August 7, 2018.

Mayor Ronald P. Aquino raised the flag up to the pole’s apex then lowered it to half-mast when the national anthem was sung during the ceremonial unveiling of the marker that heralded the “70 Days Countdown to 70 Years Charter Anniversary” of the city while local government employees wore black arm bands during the parade. In that parade, placards in outcry for justice to the death of Engr. Joker were likewise carried around the city. 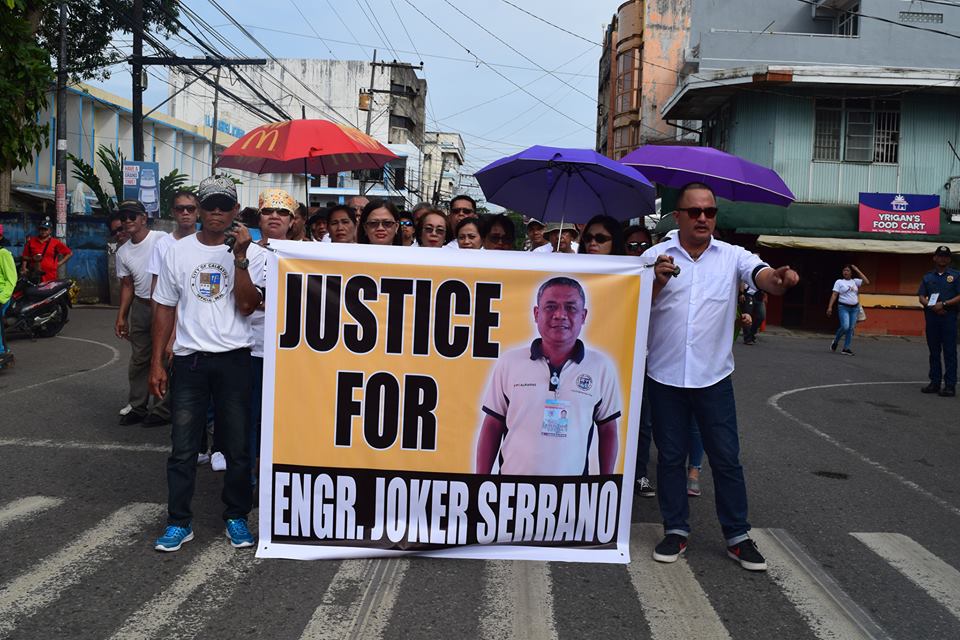 One of the placards in outcry of justice for Engr. Joker Serrano.
Several months ago, planners scheduled the marker unveiling to be celebrated on August 8. However, nobody, but perhaps only those who wanted him dead, knew then that one day before that celebration, a merciless shooter would snap the life out of Engineer Serrano.

Referring to the ceremonies as a painful morning when it should have been a festive celebration being the opening of the activities and merriment, Samar’s First District Representative Edgar Mary Sarmiento called on all Calbayognons to carry on to stand for the city and its development amid the pain of losses caused by the continuous dastardly act of the criminals obviously done to create fear in people and threaten those who support the present leadership of the city. 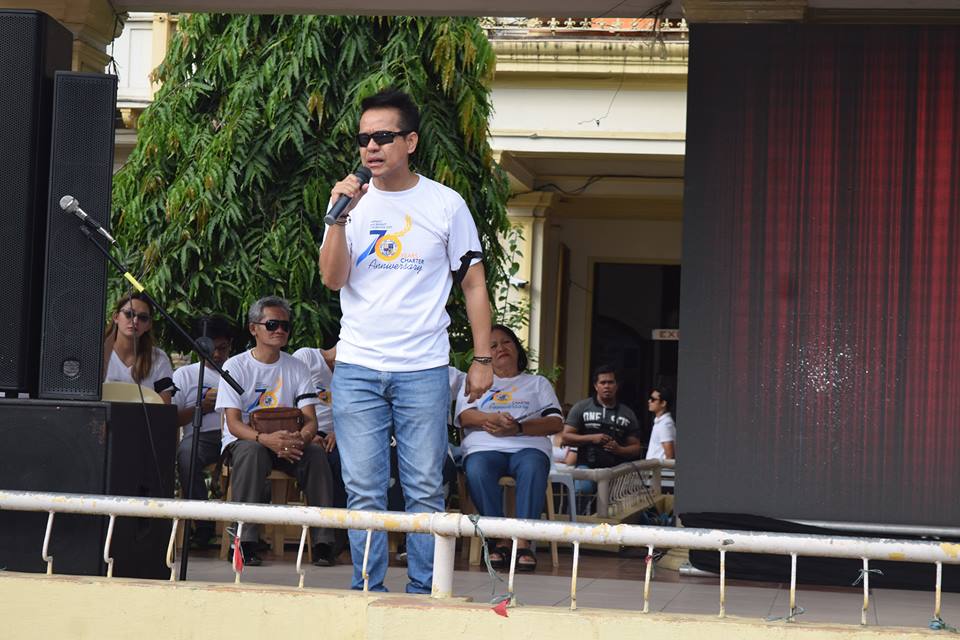 Samar's First District Representative EDGAR MARY SARMIENTO, in his speech, encourages Calbayognon's to continue to "Stand for the Good" amid the losses of lives that the criminals have caused.
“Bisan kon nano pa nira nga pag-inutod san kinabuhi san Calbayognon, tindog kita! Iton an akon aroon sa iyo! Tindog kita sa kaupayan! Ayaw kita kahadlok sa siton kay mao man gud siton an ira katuyuan” (However they continue to cut the life out of Calbayognons, let us stand. That is what I will ask from you. Let us all stand for the good! Let us not be afraid), Sarmiento said.

“An rason sine nga ira pag-inutod san kinabuhi, maaram na gad kit nga tanan – an pagtarhog, an pagpanhadlok san aton mga botante para san panahon nga kita pagpili unta san mga tawo nga ungod nga tawag nga lideres, mahadlok an aton kabugtu-an,” (We all know the reason for their continued act of killing – to scare and threaten our voters so that at a time when we will choose people who can be true leaders, our brothers will be frightened). Sarmiento added.

City Mayor Aquino, on the other hand, expressed his grief over the loss of Joker, a dedicated and hardworking employee of the city government who have not been heard complaining about difficulties encountered in the performance of his work, and the danger to his own life.

“Waray man siya ginhingyap kundi an serbisyo. Usa nga engineer nga bisan ngani, may ada tuyo sa akon opisina, makuri makayakan. Magyakan ngani, pahuring pa nga waray ko man hibati-i nga magreklamo san akon mga gin-aalayon sa iya. Bisan an iya kinabuhi gintaya pagkapot san kauswagan sa kabukiran” (He did not aim for anything but service. An engineer, who can even hardly talk about what he needs from my office. If he does, only in whispers and was not heard complaining on anything in any of his assignments. He even put his life at stake just to keep up with the responsibility of development in the mountains), Mayor Aquino said.

Likewise, Mayor Aquino expressed strong belief that the atrocity is politically motivated by stating a challenge to pinpoint what Joker did to deserve a merciless killing. Joker, according to the City Mayor, was helpful to the administration and the person to run to for help when Barangay Officials who, fearing for their lives, cannot go to their farms to make a living. 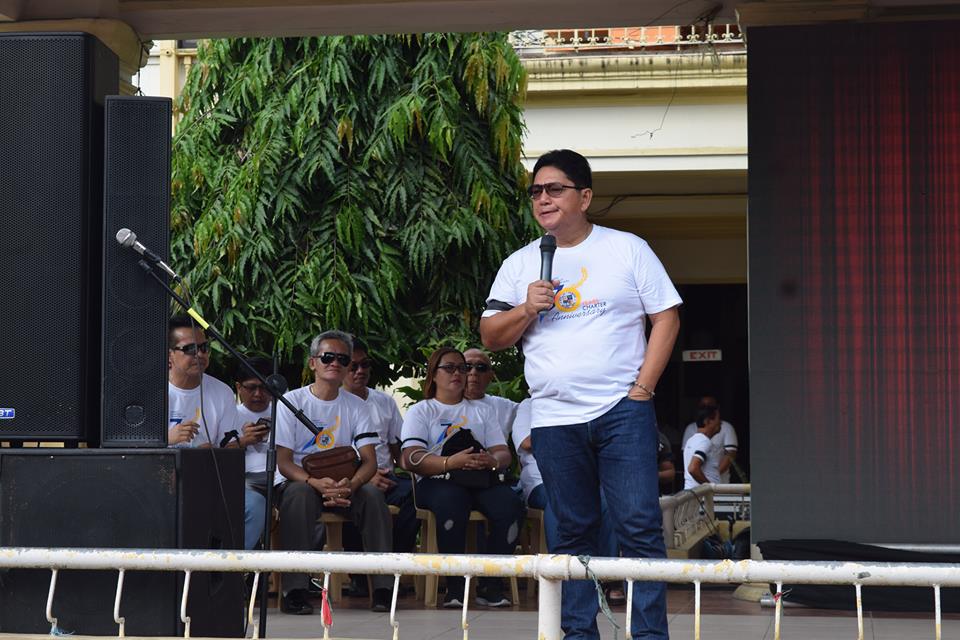 City Mayor Ronaldo P. Aquino expresses his anger over the dastardly act against Assistant City Engineer Rafaelito "Joker" Arroyo.
“Di-ak natood nga waray ine kalabtanan san politika kay nano ba an nahimo ni Joker nga sala? Todluka daw niya. Nano? Tungod la ba kay nagbulig siya san administrasyon nga siya an gin-aayupan san mga tawo sa bukid? Everytime, may barangay captains, barangay officials nga nalusad nga ultimo igparalit bogas kay deri nakakasagka ngadto sa ira kay deri nakapagpakabuhi tungod san kadlok ( I don’t believe that this has nothing to do with politics because what wrong did Joker do? Point it out. What? Is it because he helps the administration being the person to be asked for help by the people in the mountains? Everytime there are village chieftains or village officials go to Joker for help to be able to buy rice because they cannot go to their farms to make a living for fear of their lives),” Mayor said.

Engr. Joker was less than three months away of being City Engineer. He is due for appointment to the position when the present City Engineer retires from the service in November this year.

To family, friends and the city government employees and officials, Joker is known to be humble, soft-spoken, hard-working and kind- hearted, the news of his death was a shock to the city. 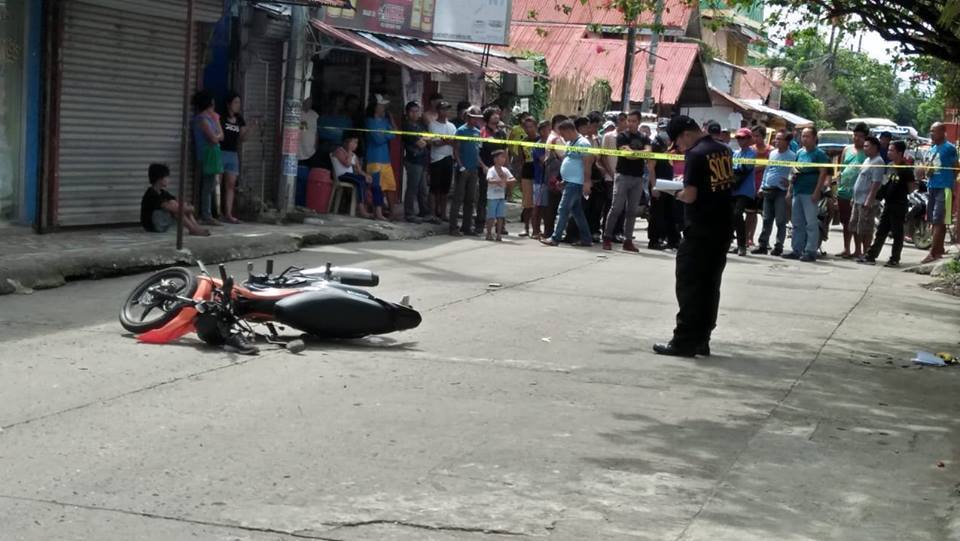 Initial crime scene investigation disclosed that at around 8:20 AM, Joker was driving his motor bicycle along Navarro Street heading north to the direction of Rueda Street when upon reaching the area fronting Petilla’s residence a shooter fired a shot from behind hitting him on the head causing him to lose control of driving thus fell to the ground. He was immediately assisted by a pedicab driver who brought him to the nearest hospital where he was declared dead at around 8:45 AM. 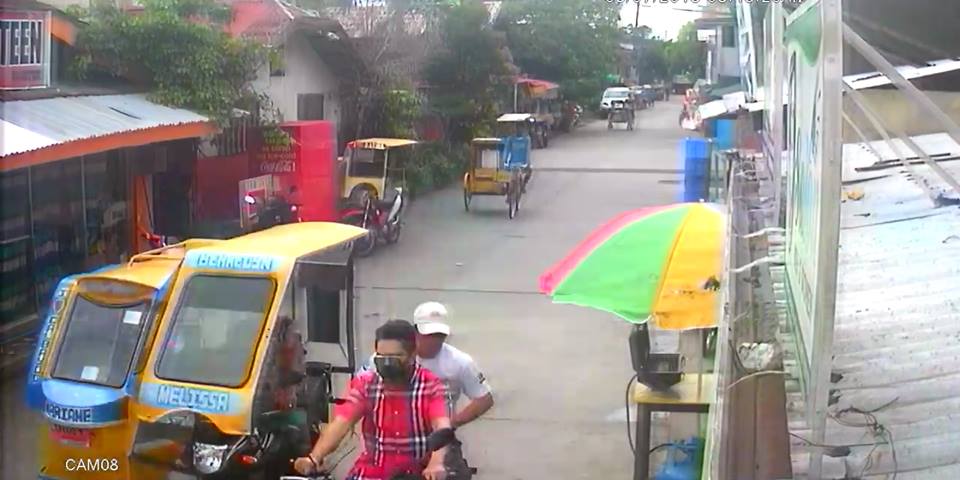 The suspects (beside the the motor tricycle) on board the motorbike were seen fleeing away from the crime scene after shooting Engr. Joker Serrano.
From 2 CCTV footages, 2 males riding-in-tandem were seen chasing the motor bicycle of Joker. One of them, the driver, was wearing red (checkered) short-sleeved polo with face covered with what looked like a surgical mask over his face (from the nose down to his chin) while the backrider (suspected to have fired the shot) was wearing a light colored T-shirt and a white ball cap over his head.

The city’s new police chief, Police Superintendent Alberto D. Garcia, Jr., in an interview, told Calbayog Journal that the autopsy examinations was conducted by Police Chief Inspector. Benjamin V. Lara, MD, Medico Legal Officer of the Regional Crime Laboratory in Region 7, an expert in forensic pathology, who found only one bullet entry point behind the lower part of the victim’s ear. The bullet traversed thru to the other side of his face but got stuck inside his right jaw. The bullet used, according to P/Supt. Alberto Garcia, Jr. was special kind having seen such only for the first time since he started police work. 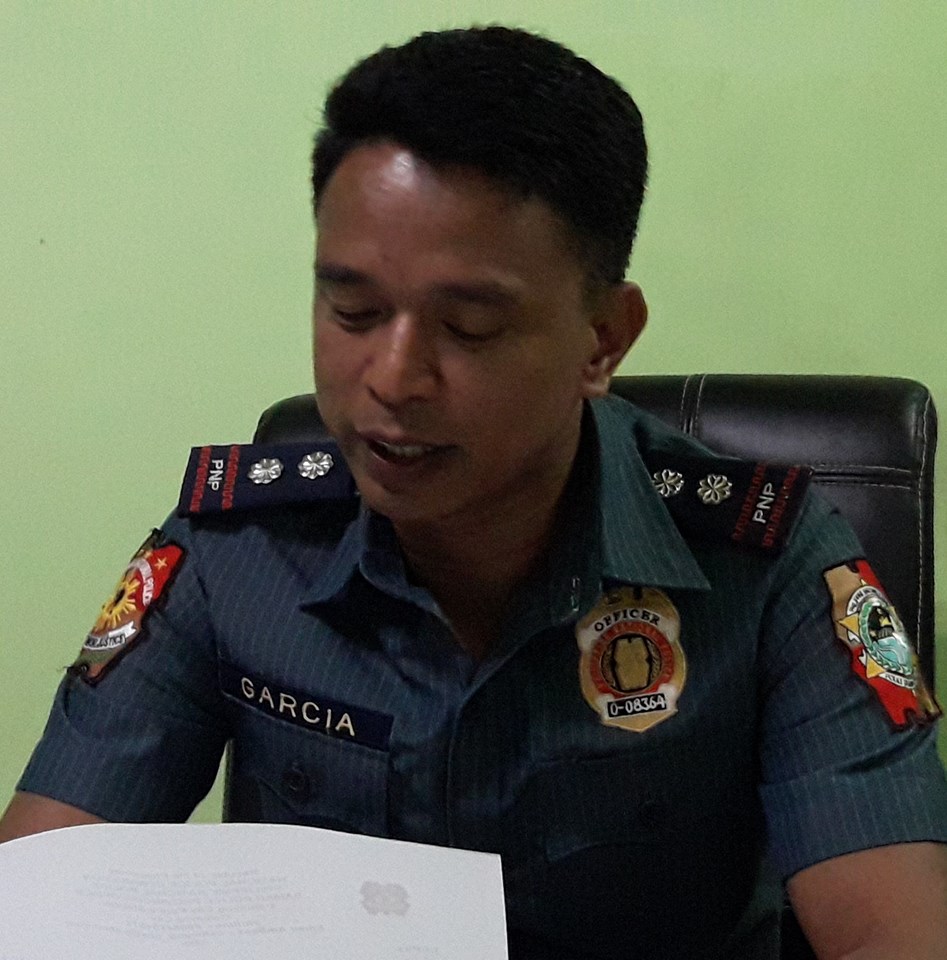 Police Superintendent ALBERTO GARCIA, JR. as the newly installed OIC-Chief of Police for Calbayog assures Calbayognon that police actions are being planned and will be implemented the soonest time for the arrest of the criminals.
“I would say that the bullet retrieved from the face of the victim was some kind of “special” having seen such kind of a black-headed bullet for the first time since I entered service in the PNP,” P/Supt. Garcia said.

“Allegedly, the bullet is that of a .45 caliber firearm but which has been submitted for ballistic examinations and only until final and official findings about it can we define that the firearm used was caliber .45 firearm,” Garcia added.

Furthermore, P/Supt. Garcia in a video statement, assured the people of Calbayog that plans and programs are on its way of implementation to address the seeming continuing and pressing issues on the atrocities created by criminal groups. He further asked for the help and cooperation of the people in the villages - the communities cooperation being vital to the arrest of the people behind these criminal groups.(CJ)

loss of city engineer in calbayog

riding in tandem in calbayog