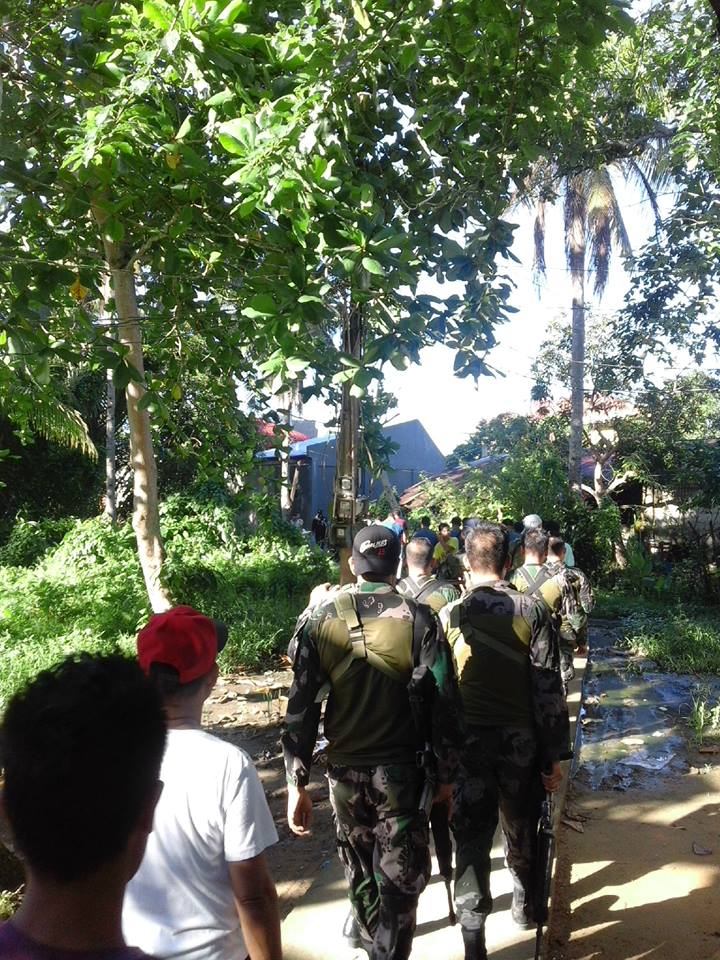 CALBAYOG CITY – Parading uniformed and heavily armed and veiled men believed to be members of the Philippine National Police who were in the company of a few civilians creates, fear, panic and alarm to residents in two of the city’s villages during the first few hours of daylight on May 11, 2018, three days before the May 14, 2018 Barangay and Sangguniang Kabataan Elections (BSKE).

Fear grips residents of Sitio Tigbi (Purok 1) of Barangay Capoocan when at around 5:00 o’clock in the morning, uniformed men with high powered firearms and back packs of ammunitions came around the village knocking and kicking at doors of several houses in the area.

According to City Mayor Ronaldo P. Aquino, Police Chief Inspector Jose Tabada who was identified to be among the uniformed men, admitted to have led his group of men in the operation in Sitio Tigbi.

“Upon information from the residents to have identified one of the police in the group, I immediately called Police Inspector Joselito Tabada who admitted to have operated in the area with his men but reasons out that he did not do anything wrong,” Mayor Aquino told Calbayog Journal. 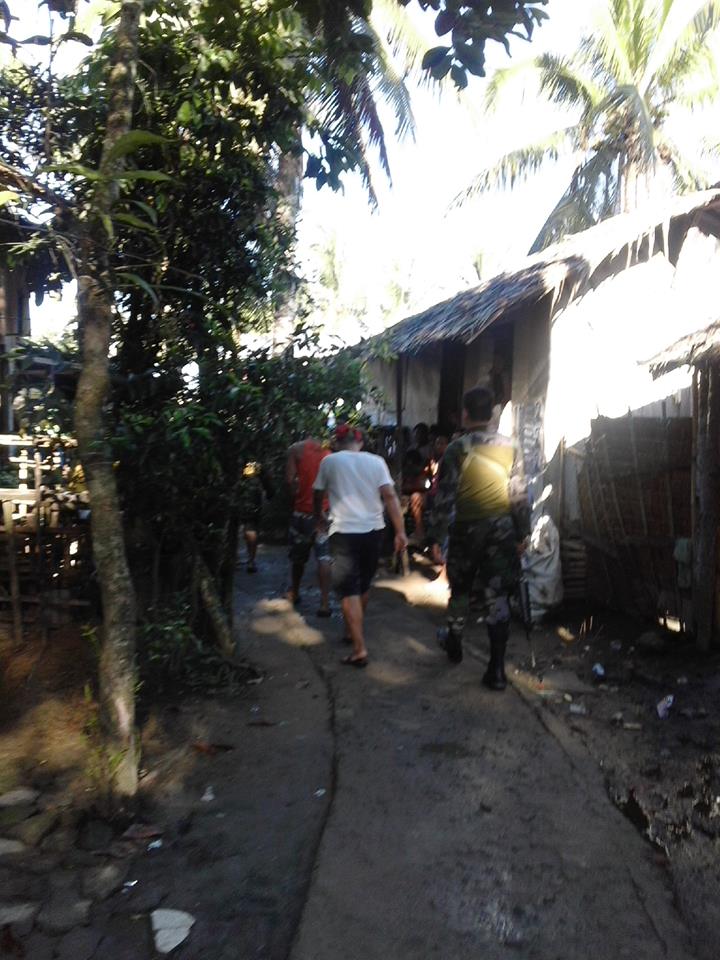 Residents, in an interview, told about the fear for their lives, particularly for their relatives who came to seek refuge in that area following the escalating intimidation and threats against the lives of candidates coming from criminal groups believed to be camping in the city’s Upper Happy Valley area. Some of these relatives are candidates for barangay officials in five of the villages in the Upper Happy Valley area.

“Nagkahadlok kami bisan kon waray kami mga sala sa balaud, tungod san nahitatabo yana nga panmatay didto sa Upper Happy Valley san mga nakandidato nga nasuporta san administrasyon dinhe sa ciudad kay may ada nala nganhi namakwit nga mga kandidato san ira pamalagiw didto kay nahadlok nga sira an sunod nga pamatayon, (We were afraid even if we did not do anything against the law because of what is happening in Upper Happy Valley Area where candidates that support the city administration are killed because we have relatives who sought refuge here for fear that they will be killed next.),” one resident told Calbayog Journal.

Police Investigators, SPO2 Marianito Fermilan and his team, who were already in the area when Calbayog Journal arrived, informed that they responded to a call, thru cellular phone, made by one of the residents who reported about uniformed men knocking and kicking doors of several houses for the name of Bembol Terga. 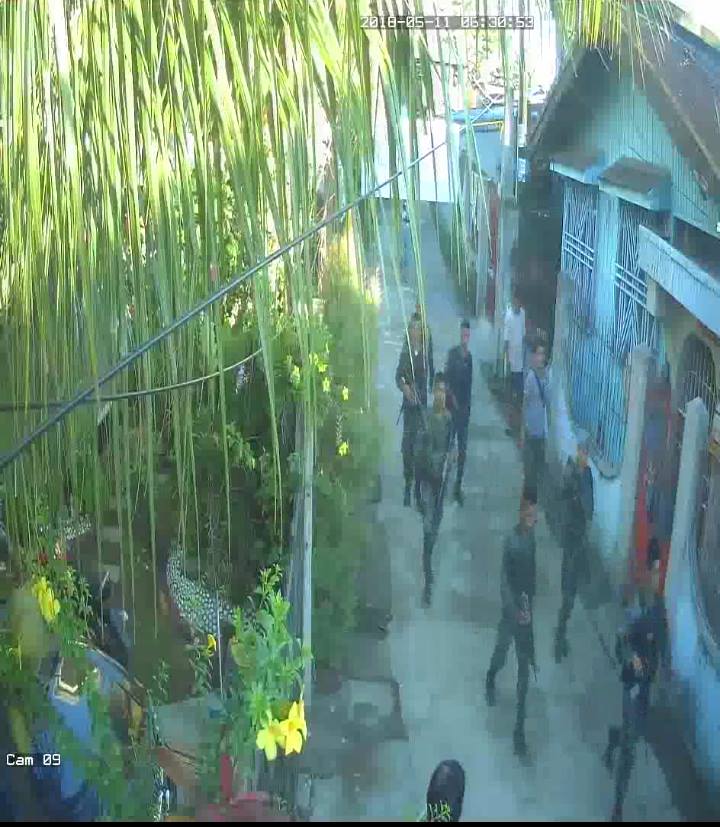 (This photo is taken from the CCTV footage of Barangay Obrero as the uniformed men entered Purok 3 of the Barangay.)
Meanwhile, at around 6:30 also in the morning the same day, a group of men, also unformed and heavily armed men paraded to the seawall area (Purok 3) of Barangay Obrero, a village near the city’s downtown area and about two kilometers south from Sitio Tigbi.

Witnesses from Sitio Tigbi who were shown copy of the CCTV footages of Barangay Obrero believe that they are the same group of men by the looks of the clothes of the casually clothed men in the group. 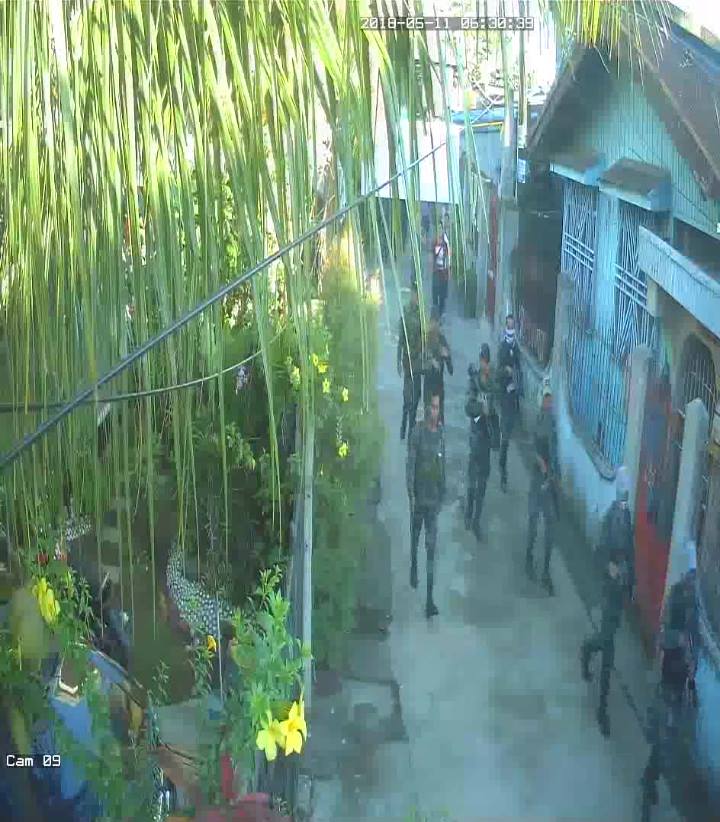 (This photo is also taken from the CCTV footage of Barangay Obrero as the uniformed men entered Purok 3 of the Barangay. Please take note of the two (from the 4) uniformed men whose faces were covered with bonnets.)
According several residents in the sea wall area of Barangay Obrero, the men paraded from the rocks by the river towards the Covered Court where the group stayed for a few minutes until they exited towards the direction of the Captain’s Bar & Restaurant along the Old National Highway in Purok 4 of the same Barangay.

Calbayog Journal has no way of confirming whether the two police operations (Sitio Tigbi in Barangay Capoocan and Sea Wall Area in Barangay Obrero) are activities of his group because calls for an interview made to Police Inspector Tabada proved futile as of this writing. His number is either out of coverage area or the call is not answered. 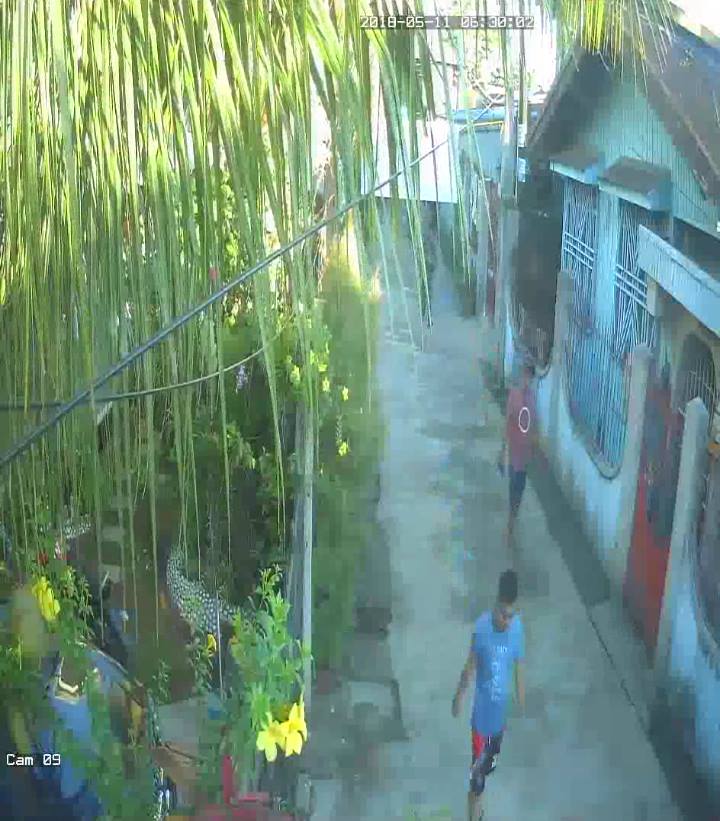 ( This is another photo from the CCTV footae of Barangay Obrero as the uniformed men entered Purok 3 of Barangay Obrero. These are the two casually-clothed persons that made witnesses conclude that these are the same group of uniformed men that went to Sitio Tigbi.)
Other but still unconfirmed reports by the residents in Barangay Obrero have it that one of those in the group of armed men is believed to be confined in the lock-up cell of the city police station. Calbayog Journal is still trying to get in touch with the jailer on duty at the time when the alleged police operations was being done.

Calbayog City Police Chief, Police Superintendent Jose Junar Alamo who could have shared views whether the operations in Sitio Tigbi, Barangay Capoocan and the Sea Wall Area of Barangay Obrero were coordinated with the city’s police headquarters, did not accommodate the phone call of Calbayog Journal.(CJ)

NOTE: Names and identities of witnesses and sources of information of people in the community are withheld for security reasons. 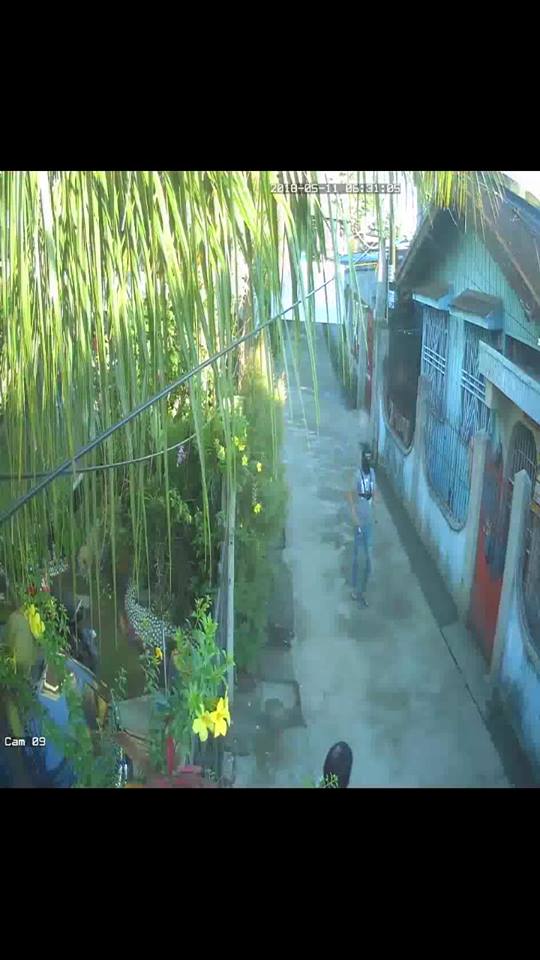