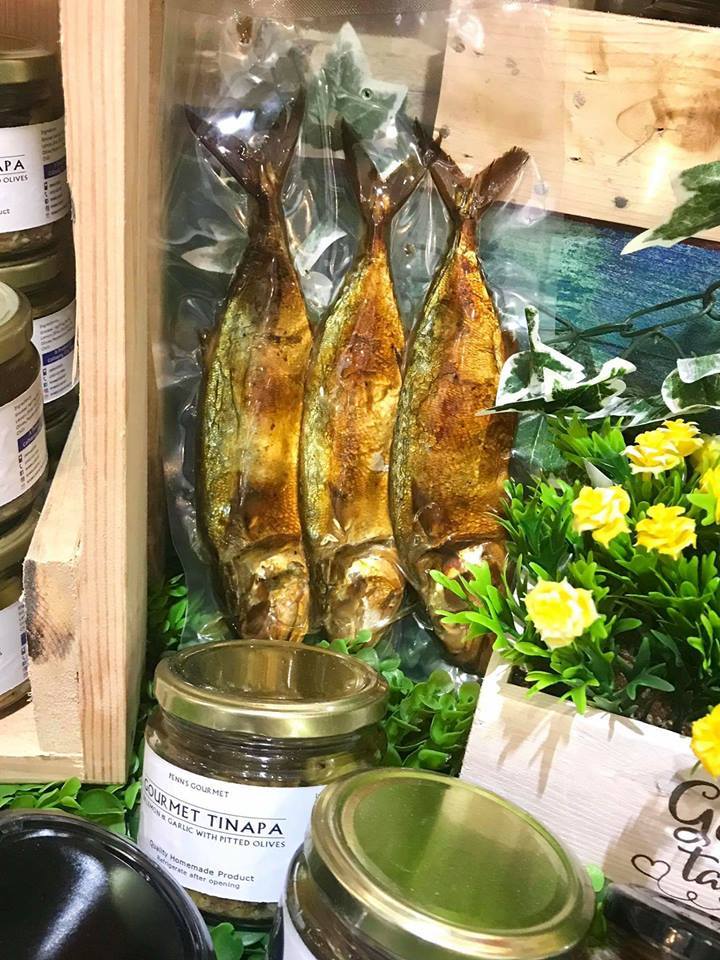 LET US BEGIN WITH SOME DEFINITIONS

The word “Tinapa” applies to preserving and/or cooking fish by a smoking process, using a variety of fire woods or sometime, even shavings from lumber. In other words, Tinapa is the Filipino “smoked fish.” Somewhat related is the word “tapa.” This one, however, refers to either air or sun-dried meats, usually beef or when available, “deer meat” as in “tapang usa.” Dried venison. (Usa--oosa--is deer in Filipino)

On the other hand, there does not seem to be any traceable connection between the very popular Spanish bar chow, hot or cold snacks, called “Tapas.” “Tapas” go with vino and/or cerveza or simply snacks in between meals.

In old Manila, the memory of which takes me back to late 1930s to the 40s, Tinapa was commonly made out of bony “bangus” or milkfish. Traditionally, fresh bangus/milkfish that do not sell in the morning is smoked in the afternoon. That is what tinapa was. Extending the shelf life of unsold, no-longer-pond-fresh milkfish was indeed a primitive culinary innovation.

It just might be possible that the ‘tinapa’ culture and process is really of Tagalog provenance. Visayas and Mindanao fisherfolk definitely produced salted, sun-dried fish but they were not known to have been producers of smoked fish, tinapa.

At least, not until a Calbayog City seaside barangay entered the picture.

FROM SEA TO SMOKE HOUSE TO THE DINNER TABLE

It is rather a quaint story that Waray-waray Samar welcomed and hosted Cavite/Tagalog migrant settlements that came around the turn of the last century. They were mostly and initially fisherfolk. I remember at least three such communities in various parts. In Basey, Santa Magarita and Calbayog. In Calbayog, the seaside barangay is called “Matobato.” In my childhood, I recall that the barrio was also fondly called ‘katagalogan,´meaning populated by Tagalogs. The common patois was a mix of Tagalog with a Waray-waray accent or its inverse, spoken interchangeably.

Calbayog City’s recently minted culinary fame comes from our dinner table pride: “Calbayog Tinapa.” This is not unsold, no-longer- fresh fish. Neither is it bangus or milkfish. These are fish caught with specific intent of being smoked fresh, as fresh as can be from Samar sea to smoke house to customers’ dining tables. Such is the open secret to the freshness taste that has delivered success of this barangay cottage enterprise. There are several of this Matobato-based family ventures in operation, each with their own set of customers. I believe one or two of them already have outlets in Metro Manila. But most local customers do in fact purchase for consumption of kin and friends who reside elsewhere. Oftentimes, beyond Philippine shores. ‘Calbayog Tinapa’ has become an export product.

The Matobato/Calbayog tinapa stock is from easy-to-debone mackerel varieties known locally as Aguma-a (Hasa-hasa in Tagalog) and Burao (or Alumahan). On several occasions, I have been able to bring a modest supply of ‘Calbayog Tinapa’ to San Antonio, Texas. My refrigerator freezer is able to keep it for a much longer time, lasting for over six months, even.

For the uninitiated, I first thaw the frozen tinapa, after which I either steam it or microwave while wrapped in wet tissue paper. And, of course, best enjoyed with sliced tomatoes, paired with salt-pickled duck eggs. 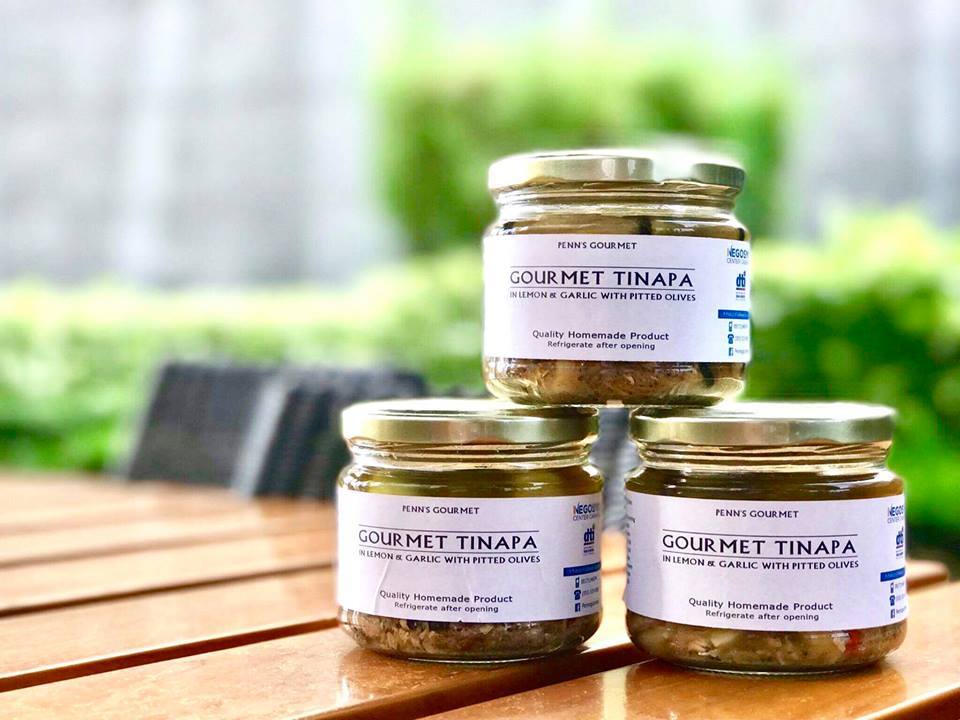 In early October last, the Department of Trade and Industry organized a regional trade fair known as the Eastern Visayas Bahandi Trade Fair. “Bahandi” is the Binisaya word for wealth or treasure. This particular promotional government exercise is to display and recognize Region 8’s home developed delicacies and unique crafts. A Calbayog City entrepeneur-participant was awarded the twin recognition of being the “best seller” and “best booth presentation.”

That award-winning ‘best seller’ was a new, different and innovative presentation of the “Tinapa.”

The ‘best seller’ turned out to be a new Calbayog product that I had previously tasted and enjoyed, just several months earlier. I brought two jars of the product back to Texas, a gift from a friend. Frankly, I was impressed with the product. Not only because of its agreeably delectable appeal for my personal taste buds but because of the bold innovation behind the product. The very thought of elevating our Tinapa into a gourmet’s delight is indeed attractive, challenging and worthy of encouraging support. Imagine, a Calbayog-branded export product possessing potential cosmopolitan gustatory appeal! 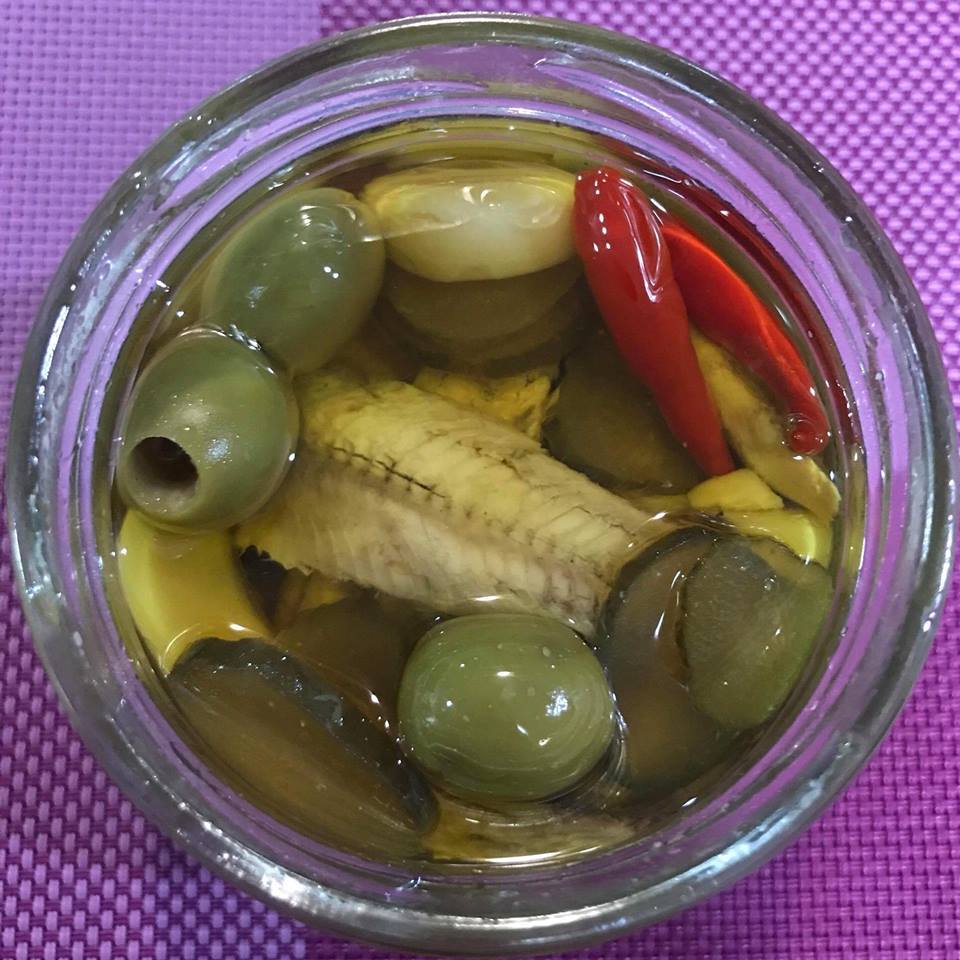 The other day, I met, through mutual friends, the young man who dreamed up, experimented and launched our Tinapa into Gourmet status: Mr. Penito Delequina. An engaging and enterprising mind, Pen’s penchant for gourmet stuff and his passion for converting the ordinary into the extraordinary inspired him to venture into “Penn’s Gourmet Tinapa.” One version is with lemon, garlic with olives and its companion product: “Pomodoro Formaggio Tinapa” is soaked in tomatoes, cheese, chili and Italian herbs. Both are packaged in 10 ounce, 500 gram glass jars. Apart from personal consumption, these would make for ideal year-round gift-giving.

Penn’s tinapa is made out of “Tamban” fish which is much smaller than Hasa Hasa and Alumahan. Tamban is also known as Sardinella, a herring-type of fish. I think this is the type of fish that is sundried and is made into what is popularly called “tuyo,” the Filipino everyman’s humble daily fare. Dried herring.

BUT WHAT A DIFFERENCE INNOVATIVE AMBITION CAN MAKE: "TUYO" GONE GOURMET 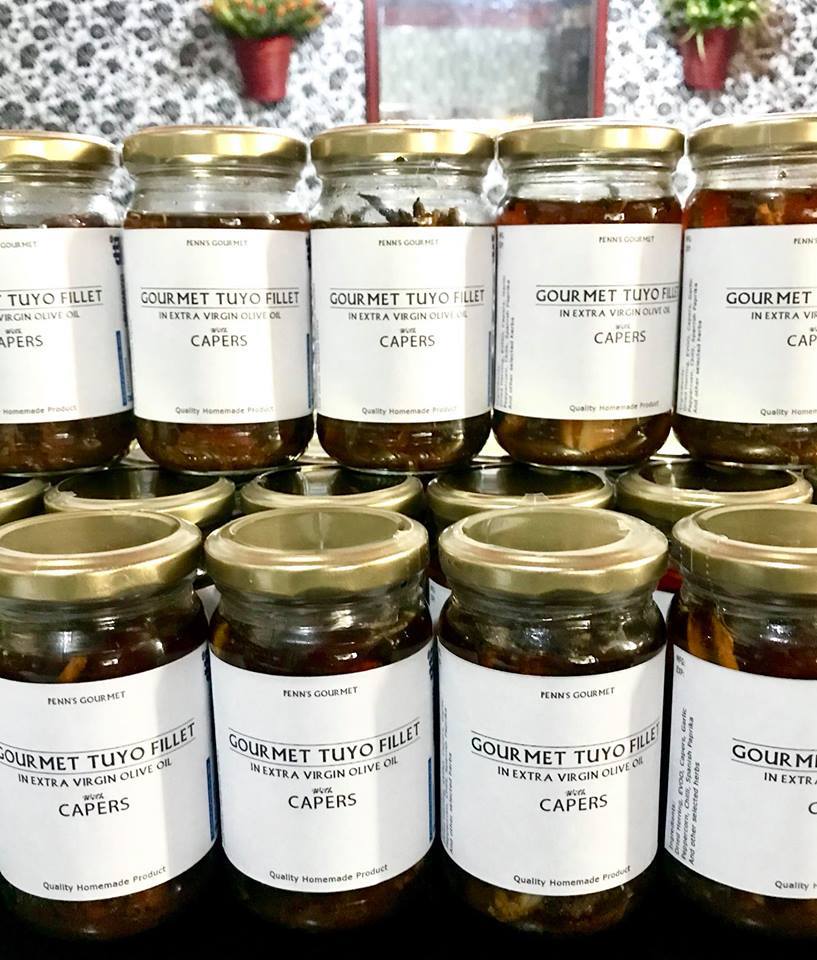 Pen Delequina has his own smokehouse operations utilizing timber shavings for firing his smoke. He employs about 15 to 20 women, who meticulously and sanitarily hand de-bone every single smoked tamban before marination, processing, enjarring and labelling. With success very apparent and real, Pen will have to seek expanded quarters for his operations, which in the natural course of business he is already gearing for. Obviously, he will soon be requiring banking assistance for marshalling potential growth. It is very noteworthy that Pen started out with about $100 capital (PhPesos 5,000.00)

It is an encouraging and happy thought that demand for Penn’s Gourmet Tinapa products has begun to outstrip his supply and production capacity. An entrepreneur’s reward for ideating and supporting an innovative product with sober ambition and hard work. I understand his Christmas production is now fully committed. The Calbayog diaspora world wide, through home visits, word of mouth and social media are, of course, the immediate and natural export market for this product. I happen to be part of it.

Let me end with a disclosure and a sentiment. I am not Penn Gourmet Tinapa’s sales agent. I am simply a contented customer wanting to share a gourmet’s delight! And, be part of the cheering squad for another Calbayog success story. 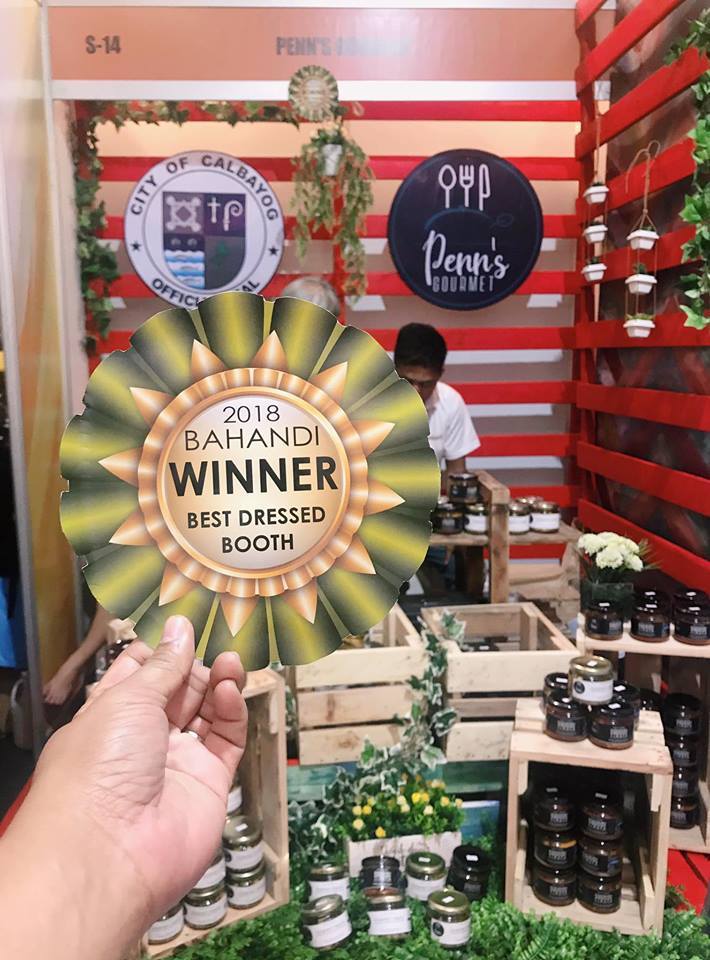