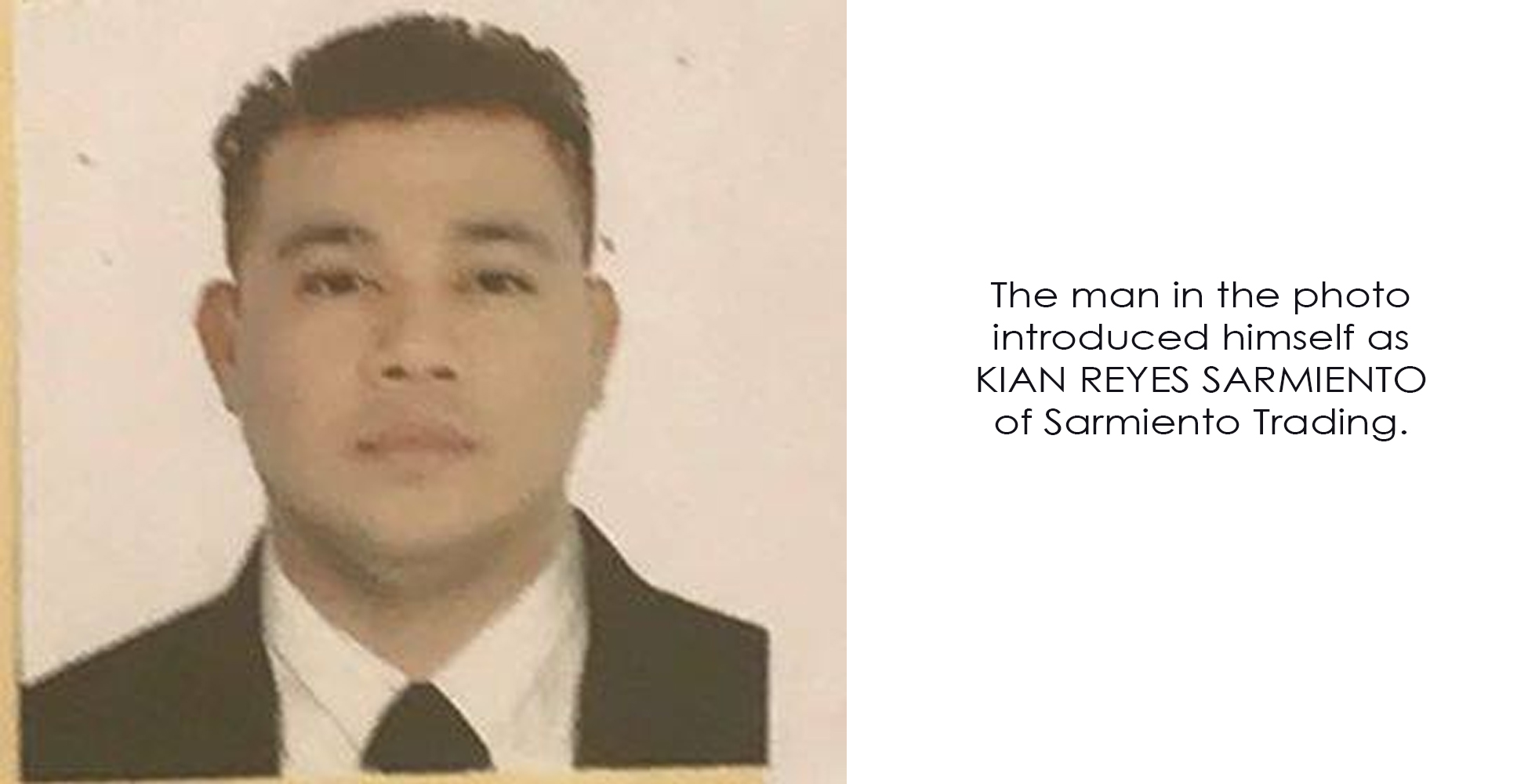 CALBAYOG CITY – Over two million pesos (PhP2M) worth of goods is divested from the business community in the city by a trader who introduced himself and bear documents as Kian Reyes Sarmiento, operating under the business name of Sarmiento Trading.

A group of businessmen here is confronted with the dilemma as to the whereabouts of Kian Reyes Sarmiento who can no longer be contacted since the last of week of March 2018 after several of the bank checks he issued were returned to suppliers for reasons of being “drawn against uncollected deposit” and (worse) “account closed.”

Mendoza informed Calbayog Journal, that Sarmiento, introducing himself as a Calbayognon, presented and furnished copy of a Business License and Mayor’s Permit bearing the commercial name “Sarmiento Trading” approved by the city’s Business Permits and Licensing Office.

“Appearing decent, Sarmiento came to us asking for terms of payment for the goods he would need so we inspected his office in Magsaysay Boulevard Extension and the warehouse he was renting in Barangay Trinidad (Sabang), this city,” Mendoza informed and added that “we did not see any hint that the man was a trickster so we delivered the goods on the terms he requested – a ten-day credit line.”

The police blotter also contain a report of Marites de Juan of PC Tools that on March 22, 2018 (about 5:00PM) 10 units of desktop computer package and other accessories amounting to Php198,000.00 were personally picked-up by Kian Sarmiento of Sarmiento Trading.

De Juan in an interview told that “upon receipt of Sarmiento’s purchase order on March 08, 2018, PC tools conducted investigation and inspection of the Office where we were told that he was turning the ground floor of his office into an internet café while his office will be moved up to the second floor of the building.”

“Sarmiento left a PNB check corresponding the amount of the units he picked-up which upon verification of the account at PNB, we found out that there was no corresponding amount for the check and that the account was already closed,” de Juan added.

Meanwhile, Uling Roasters franchisee, Rommel dela Cruz informed that the same Kian Sarmiento has issued him PNB Check 2000000023 in the amount of Php11,250.00 for 100 kilos of dressed chicken picked-up by Sarmiento from his outlet.

“The check is dated March 23, 2018 but which was returned by my depository bank (China Bank) with the advise from PNB that the check was “drawn against uncollected deposit,” dela Cruz informed thereby adding that “Uling Roasters will be filing a complaint against against Sarmiento.”

Representative of Federal Trading Sarah Dealagdon, during a meeting, expressed dismay over the amount Php404,079.40 representing the various sorts of tires and batteries that were delivered to Sarmiento on terms.

“For our first delivery, Kian Sarmiento issued a check dated April 05, 2018 payable to “Cash” in the amount of PhP362,201.40 and made another additional purchase order for tires and batteries which he picked-up on March 21 (2018) with the promise that the check corresponding payment in the amount of Php42,878.00 will be personally delivered to us the following day (March 22) but which he never did because he did not show up anymore,” Sarah Dealagdon said.

Dealagdon further informed that Sarmiento was in direct negotiations with the owner of Federal Trading, Fernando Lim and that she was left to booking the goods to be delivered.

On March 21, 2018, when Sarmiento was last seen at Federal Trading, Dealagdon recounted having instructed by his employer to take note of the plate number that Sarmiento was using.

“I wrote it down on my notes as AAL8025, Mitsubishi Montero colored red and which color I later specifically learned as “Sedona Red, but did not remember taking a picture of the vehicle” Dealagdon further said.

During the inspection of the police blotter followed by a meeting with some of the businessmen, it was roughly estimated that Sarmiento may have hoarded over two million pesos worth of goods of all sorts – paints, tires, oil & lubricants, food, computers (desktops and laptops) with accessories, etc.

Managing Proprietor of I’s Plant Hotel, Lito Rosalado informed Calbayog Journal that the same Kian Sarmiento has placed purchased order for farm equipment and gas tanks from his equipment outlet which could have reached to an amount of over Php600,000.00.

“I actually have prepared the stocks of goods to cover the purchase order of Sarmiento to make it ready for delivery should he pass the demands of our allowable terms but because I sensed something irregular in his reasoning, I demanded that the equipment will be delivered on cash basis,” Rosalado said.

Rosalado further told that he immediately alerted his friends in the business community to exert extensive investigation on Sarmiento Trading before further allowing delivery of goods on terms thereby allowing checks to first be cleared and cashed by PNB before further negotiations or additional purchase terms can be made.

“By word of mouth, the business community was alerted and by the recent turn-out it appears that several of the business operators were hoaxed into delivery of supplies but which check payments were declared as “drawn against uncollected deposits” prompting the bank to close the account,” Rosalado said.

“The business community will suggest a meeting with the city’s BPLO to verify on the authenticity of the license and permit of Sarmiento Trading and to draw measures about protecting the business community against swindlers as well as conceptualize a collective effort to zero-in on Sarmiento,” Rosalado concluded.(CJ)